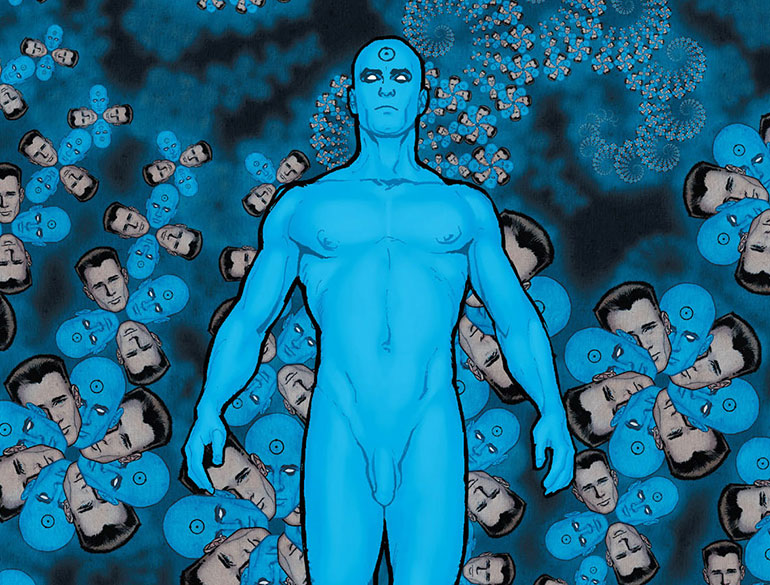 It’s been about 13 months since DC Comics released its 80-page giant of a comic declaring a brand new era for DC Comics.

13 months since writer Geoff Johns bid adieu to writing monthly comics after a five year run on Justice League, nine years re-imagining the entire Green Lantern mythos, two separate runs (no pun intended) on The Flash that ultimately led into Flashpoint, ten years of rebuilding the Justice Society of America from scratch, and years of Superman, the Legion of Super-Heroes, Aquaman, Batman, and everything else in-between.

And even with an absence from monthly comics, the long game rolls on with multiple threads coming out of that one comic, filling two years of story — most of which is only just getting started. As such, we thought it was a good time to lay out the grand plan in front of us so you know exactly what to watch out for in the coming months — and exactly what you can’t afford to miss.

But it all started in just one comic… 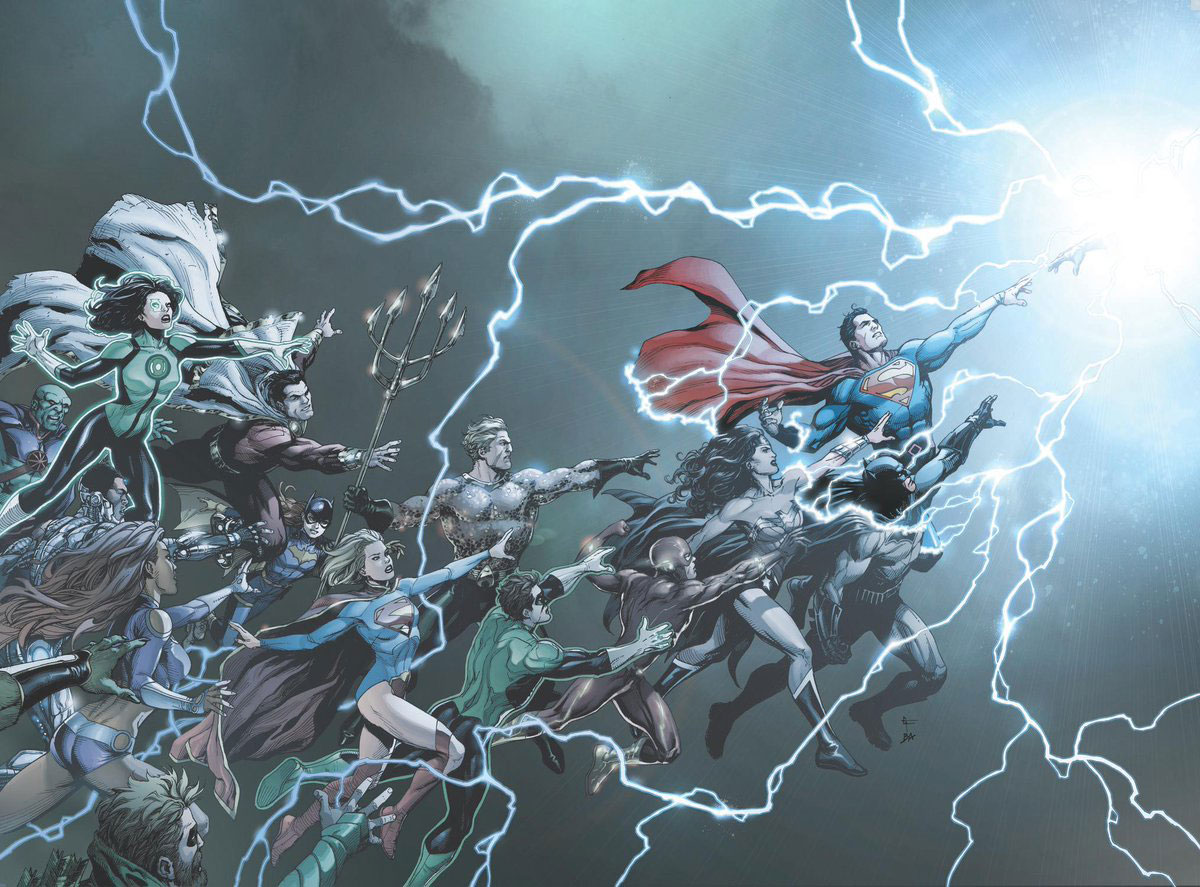 Written by Geoff Johns himself and drawn in chapters by Gary Frank, Ethan Van Sciver, Ivan Reis, and Phil Jimenez, DC Universe: Rebirth #1 introduced a lot of threads, but centered squarely on the return of Wally West — the former Flash — to the modern DC Universe. A highly emotional return, Wally stopped along the way to come across Batman, Johnny Thunder of the original JSA, his cousin — the other Wally West — his wife Linda, and ultimately his uncle Barry. It was the connection to the latter that finally drew Wally back to the land of the living.

That said, this comic was also an incredible jumble of teases and cameos, culminating in the reveal that someone besides Barry Allen was responsible for the New 52 and its loss of ten years, loving relationships, and memories. A single smiley face button, with a drip of blood, appeared to Batman. And Doctor Manhattan looms in the distance. 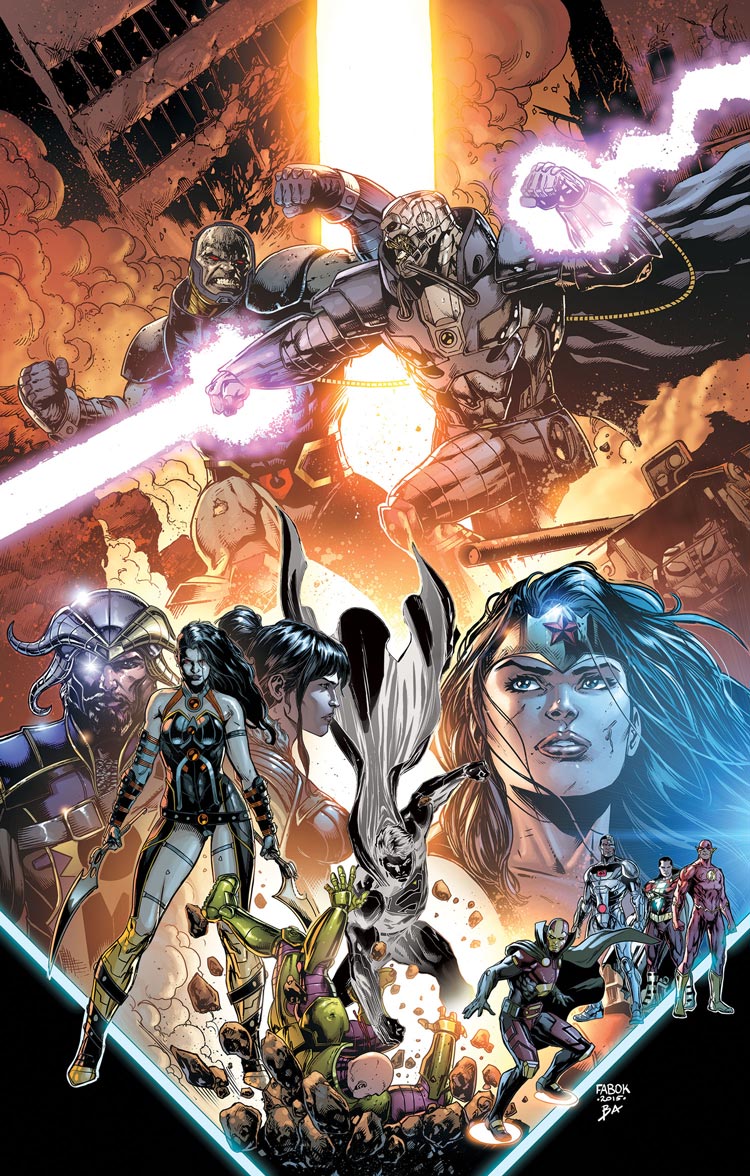 Yes, the finale of Geoff Johns’ run on Justice League, alongside artist Jason Fabok, did happen BEFORE DC Universe: Rebirth, but in hindsight, it sets up so much of what’s still to come. And the vision of the various Crises cascading across the Multiverse and the Anti-Monitor’s attention sure got mine.

From the earliest moments teasing Jason, Wonder Woman’s younger twin brother, to the final moments of Owlman being vaporized, presumably by Doctor Manhattan’s blue energy touch, Darkseid War portents a lot of what’s to come in the months ahead. 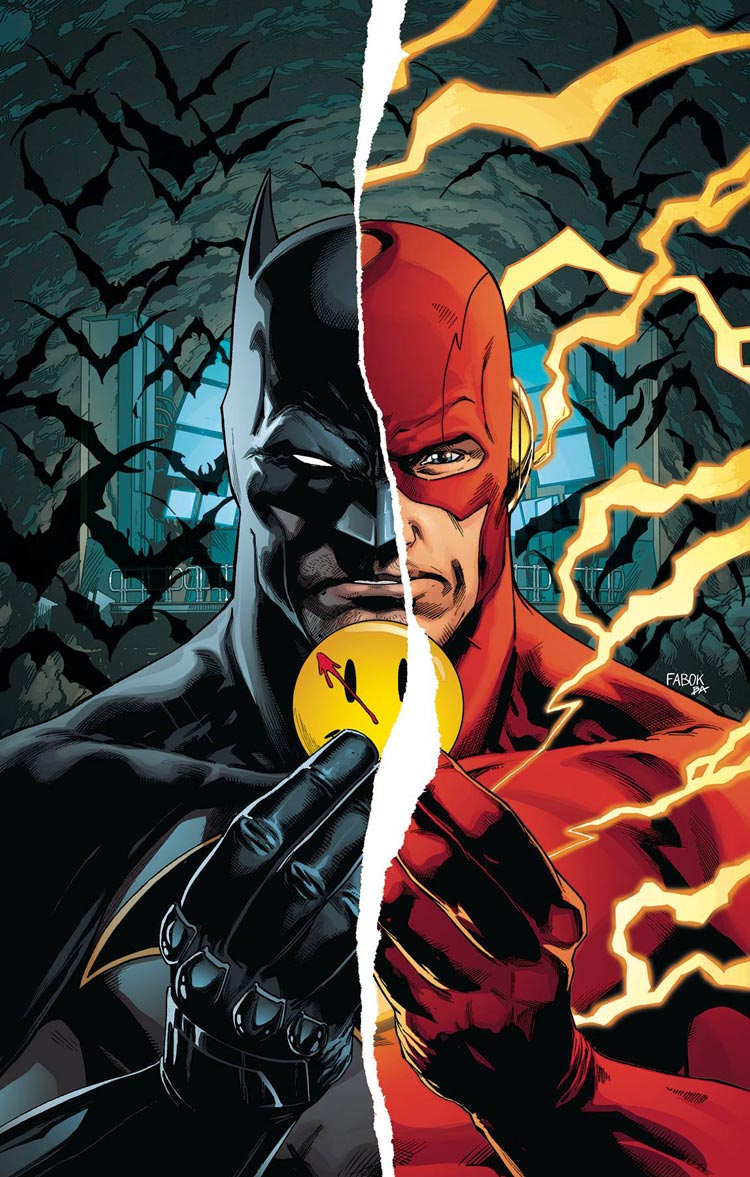 We so often think of Batman as the World’s Greatest Detective that we forget that Barry Allen happens to be one, too. Writers Tom King and Josh Williamson and artists Jason Fabok and Howard Porter hadn’t, however.

Coming back together to investigate the mysterious appearance of the Comedian’s button at the end of DC Universe: Rebirth, Batman and the Flash follow an already-dead Professor Zoom (remember, he was the catalyst to Barry’s great mistake in Flashpoint) toward what he claims to be God himself. Along the way, Thomas Wayne appears, as does Jay Garrick — the other Flash lost in time and space amid the machinations of Doctor Manhattan. 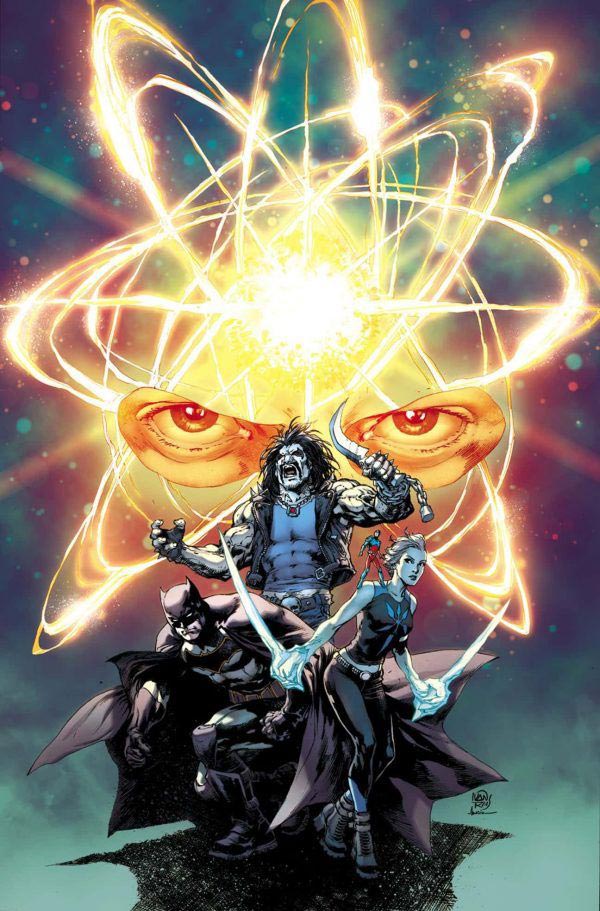 Panic in the Microverse

What it means for a student searching for his teacher is one thing. The stakes for the entire Multiverse, even beyond the expanse of the Microverse itself, are quite another. And who, ultimately, was the betrayer Ray warned Ryan about in his video message? Curious for more? Read our extensive interview with Orlando here. 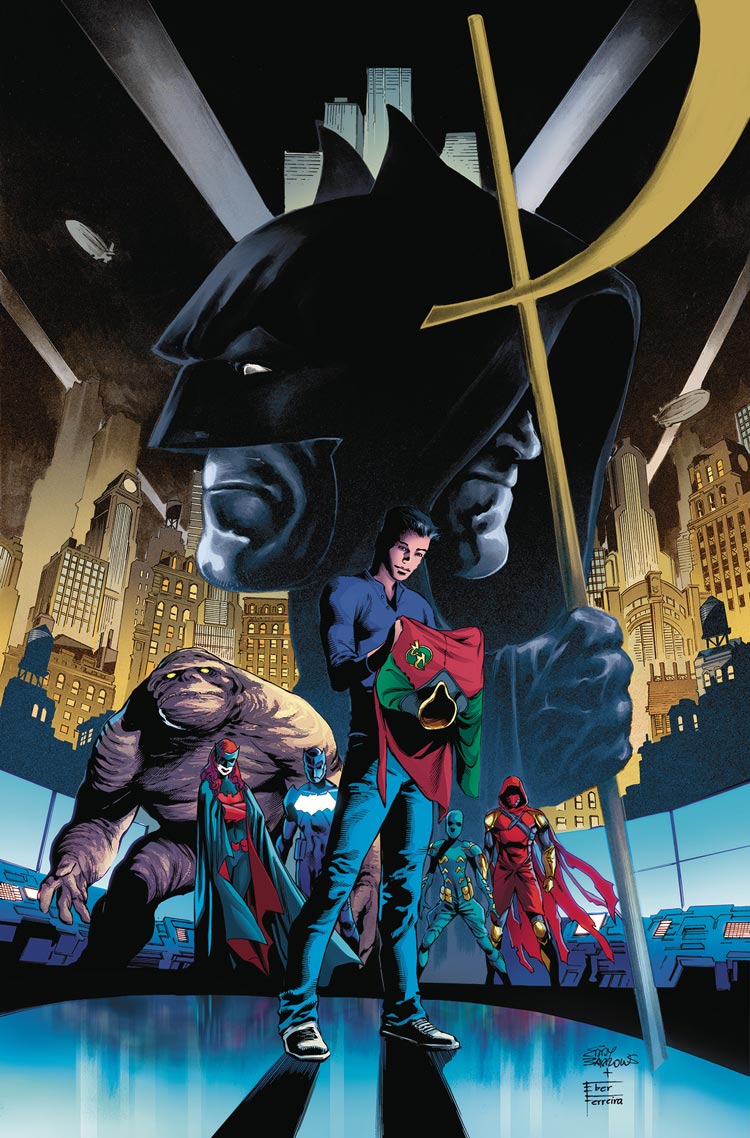 Months ago in Detective Comics, Tim Drake seemingly sacrificed his life to save hundreds of innocent lives in Gotham City as Batman and Batwoman’s team watched in horror. It seems not everything was as it seemed, however. The young Red Robin was plucked from his fate by the mysterious Mr. Oz, imprisoned alongside Doomsday and others.

Well, this September and October, it’s time to break out of that prison. James Tynion IV and Eddy Barrows place the young hero against nearly insurmountable odds — re-entering time itself — but he’s not going to have to do it alone… 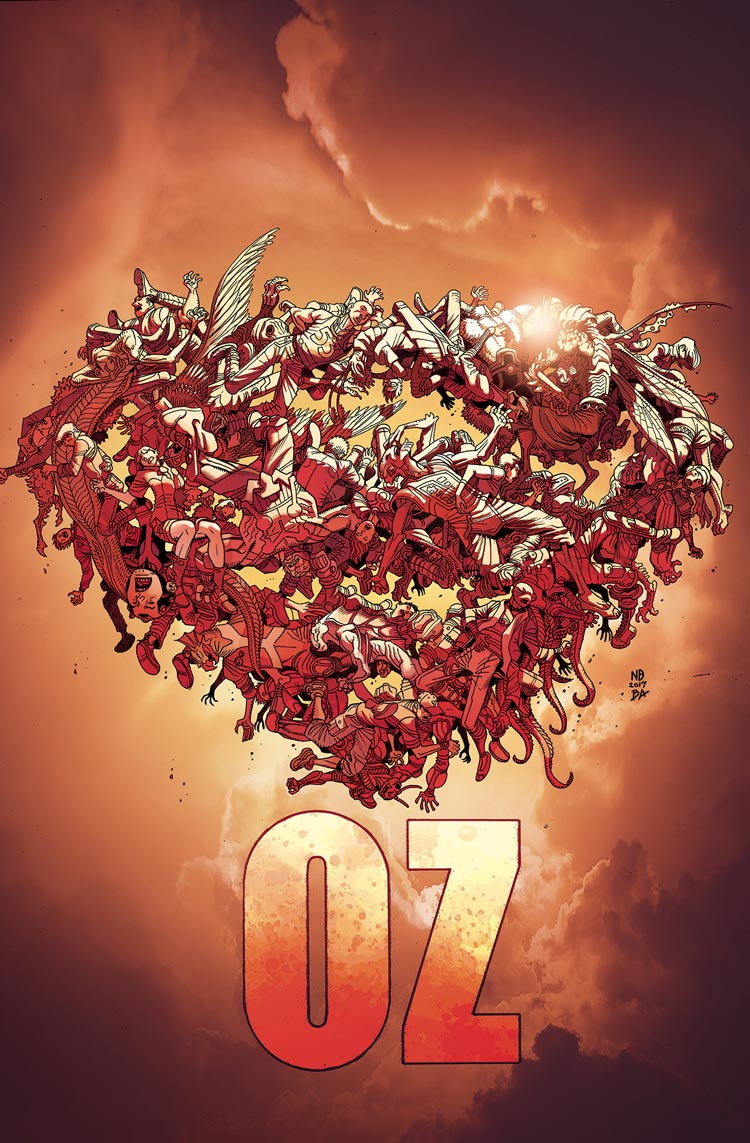 For years now, going back to Geoff Johns and John Romita Jr.’s run on the New 52 Superman, Mr. Oz has drifted in the background, wrecking havoc bit by bit and watching. Now, in this five-part story (with lenticular covers mirroring those used during “The Button” event), writer Dan Jurgens and artists Victor Bogdanovic and Patrick Zircher are ready to expose Mr. Oz for exactly who he is.

Is he Ozymandias, former colleague and now enemy to Doctor Manhattan himself? Is he Superboy Prime, returned from where Geoff Johns left him in the Final Crisis? The Time Trapper. The Wizard. We’ll know soon enough. And it may cost Superman more than he is willing to sacrifice. 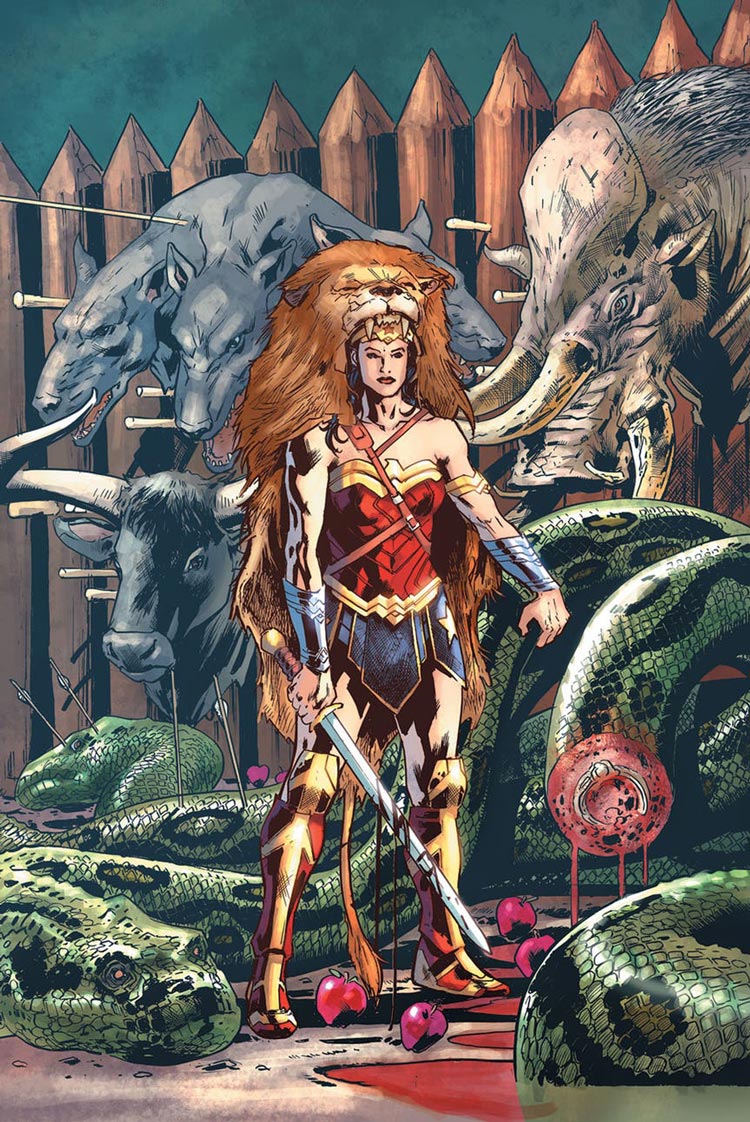 Children of the Gods

A lot has changed for Wonder Woman in the past year, having realized her entire memory of return to Themyscira was a ruse to keep Ares imprisoned beneath the island paradise. But one thing that didn’t change: Zeus is still Diana’s father, and she has a twin named Jason out there… somewhere.

This September, writer James Robinson and artists Carlo Pagulayan and Emanuela Lupacchino aim to find him, as well as pit Diana against her spiritual cousin, the deadly Grail, once again. The real question is, will Darkseid rise from the form of an infant to face the Amazon Princess once again? 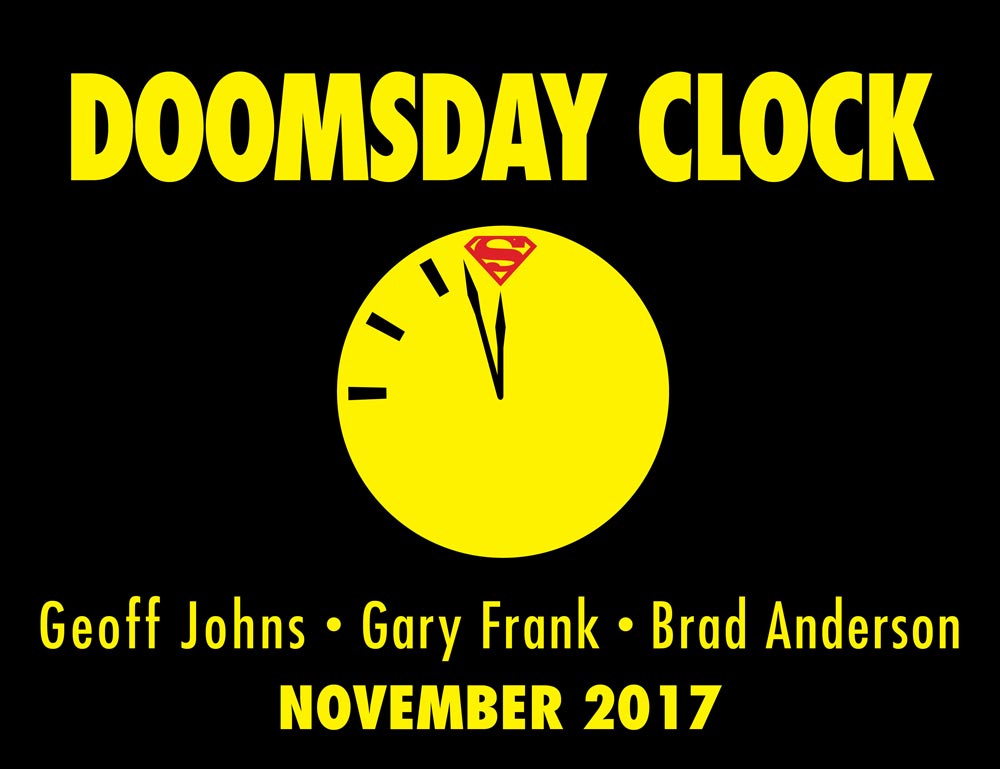 We don’t know much about Doomsday Clock other than this: it is important enough to herald the return of Geoff Johns to writing a monthly comic, and it features Doctor Manhattan facing off against the Man of Steel himself. And it may very well be the culmination of a year of teases and threads that began in Rebirth.

But then again, as the Doctor himself says, “Nothing ever ends…”

And if you’re looking for more of…. 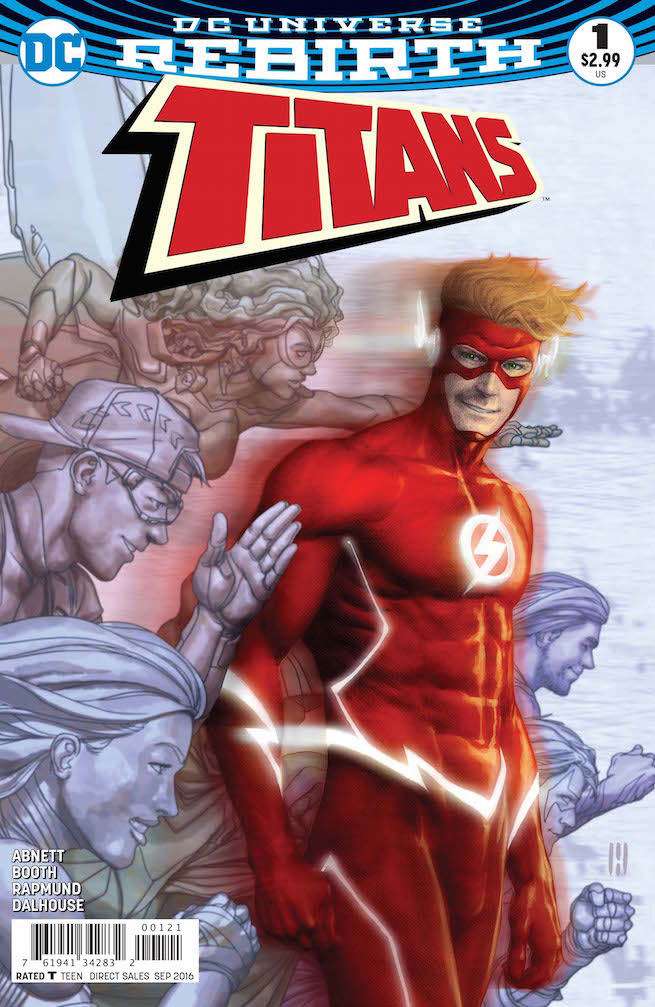 After returning from the Speed Force, Wally had a lot of catching up to do. But without his wife Linda Park even remembering him, and a newly evolved heart condition, the Flash’s time with the Titans may be more fleeting than he thought. 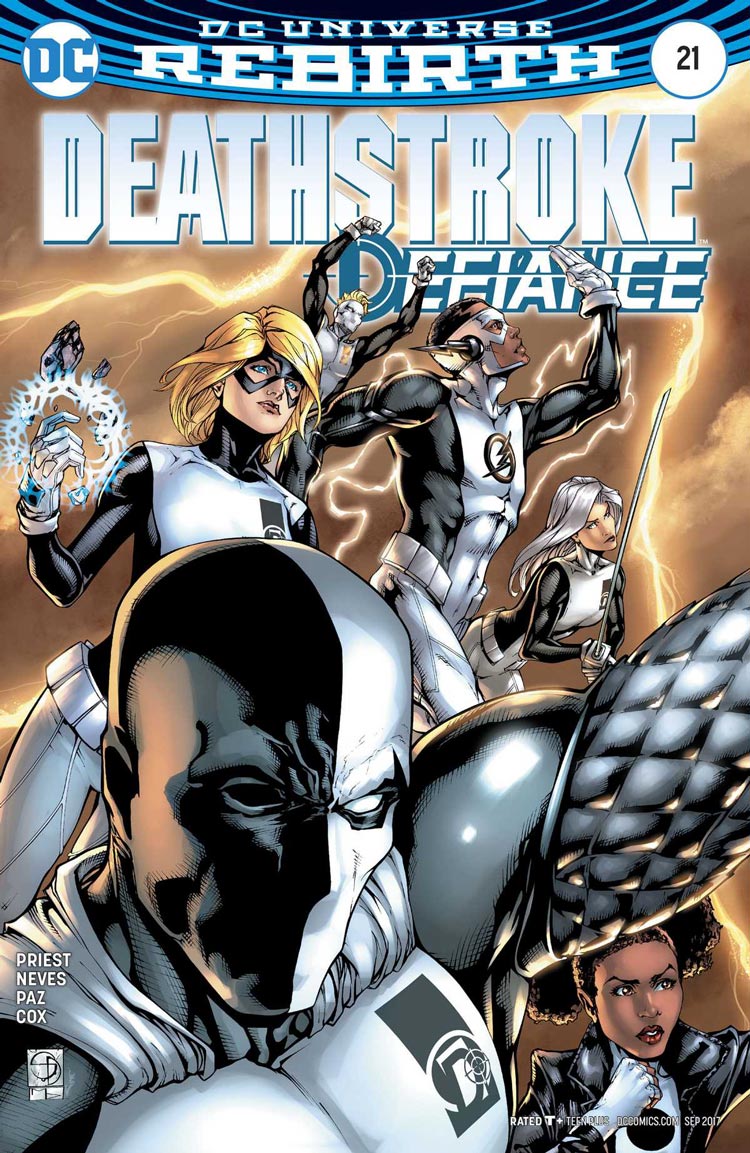 …the other Wally West

In the wake of “The Lazarus Contract” crossover between Titans, Teen Titans, and Deathstroke, the Terminator has started his own super-hero team — and Kid Flash is one of his first recruits. But will Wally fare better with Slade Wilson than he did with Barry Allen or Damian Wayne in charge? 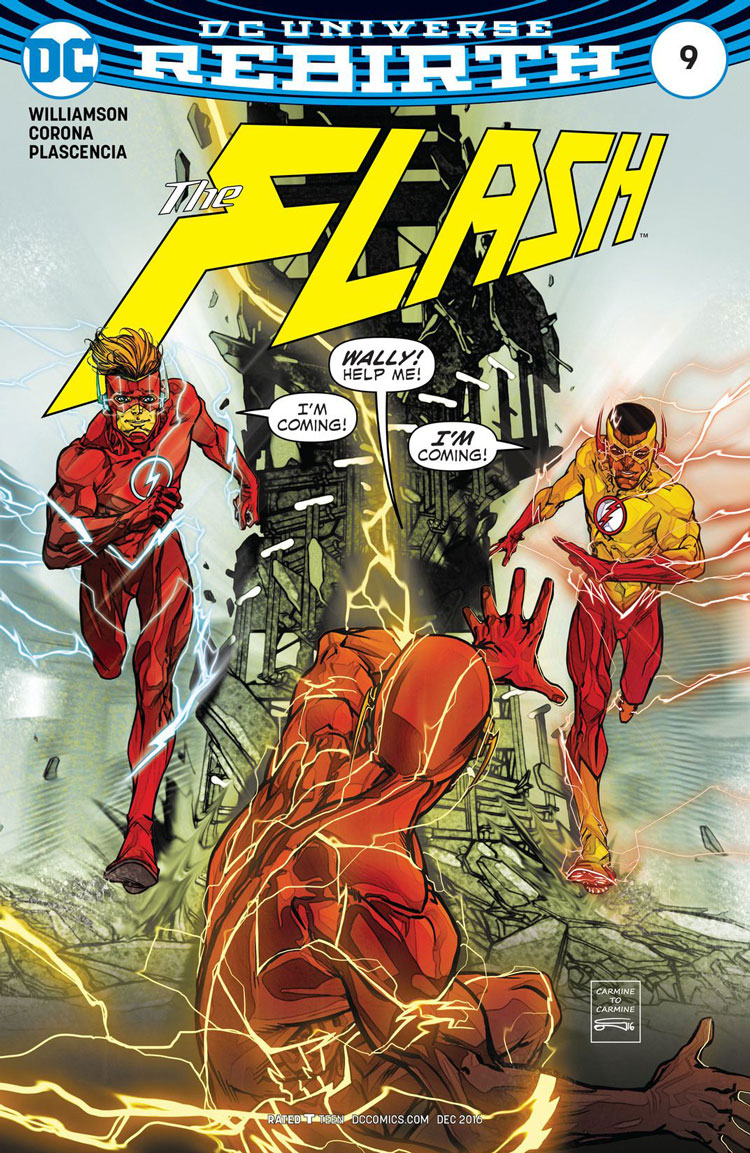 …the Justice Society of America

Jay Garrick’s reappearance may have culminated in the Button, but the clues had been there for months. With a vision of Jay’s famous helmet appearing during one of Barry Allen’s jaunts through the Speed Force, odds are pretty good we’ll be seeing more clues as time goes on. 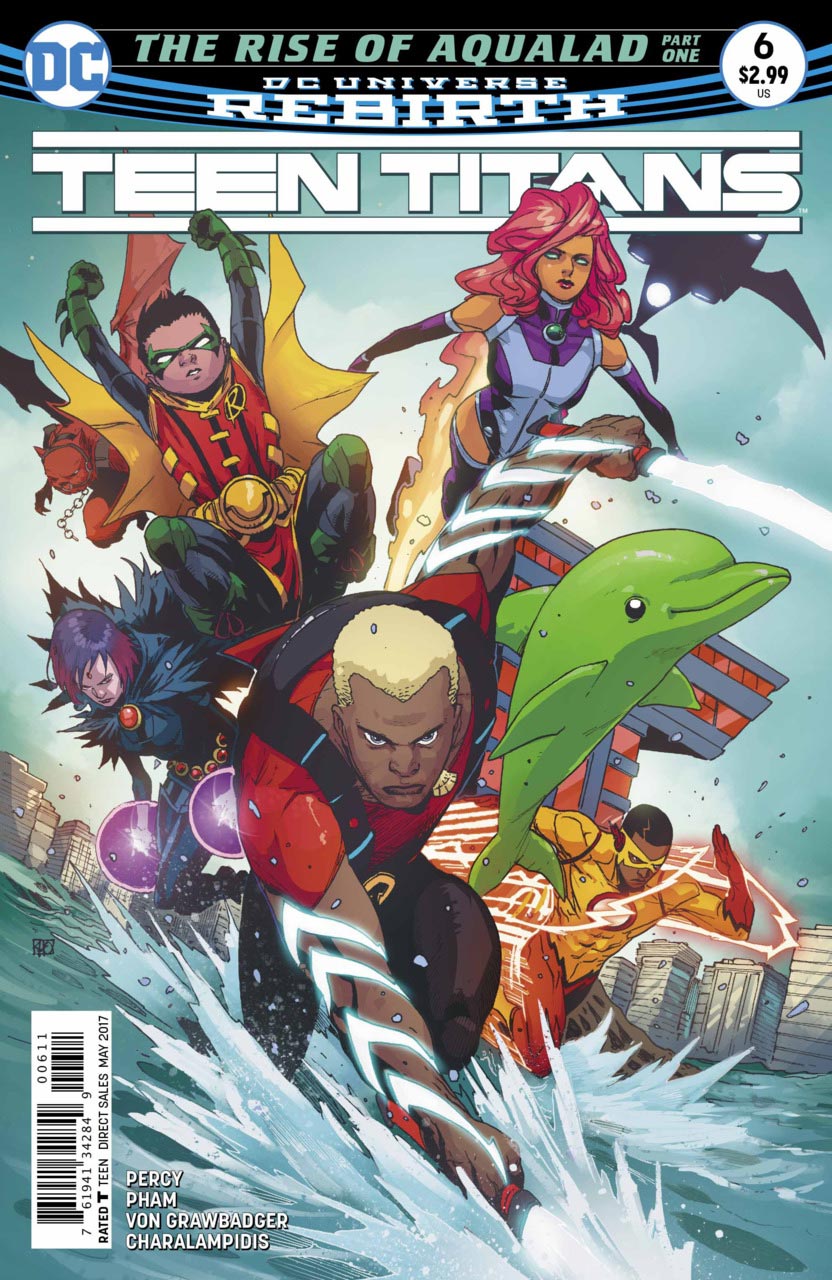 Jackson Hyde never felt like the odd one out because he was gay, but once his water-based powers started to appear, it was time to look for kids like him. Enter the Teen Titans — making a confrontation with his father, the Black Manta, a practical inevitability. 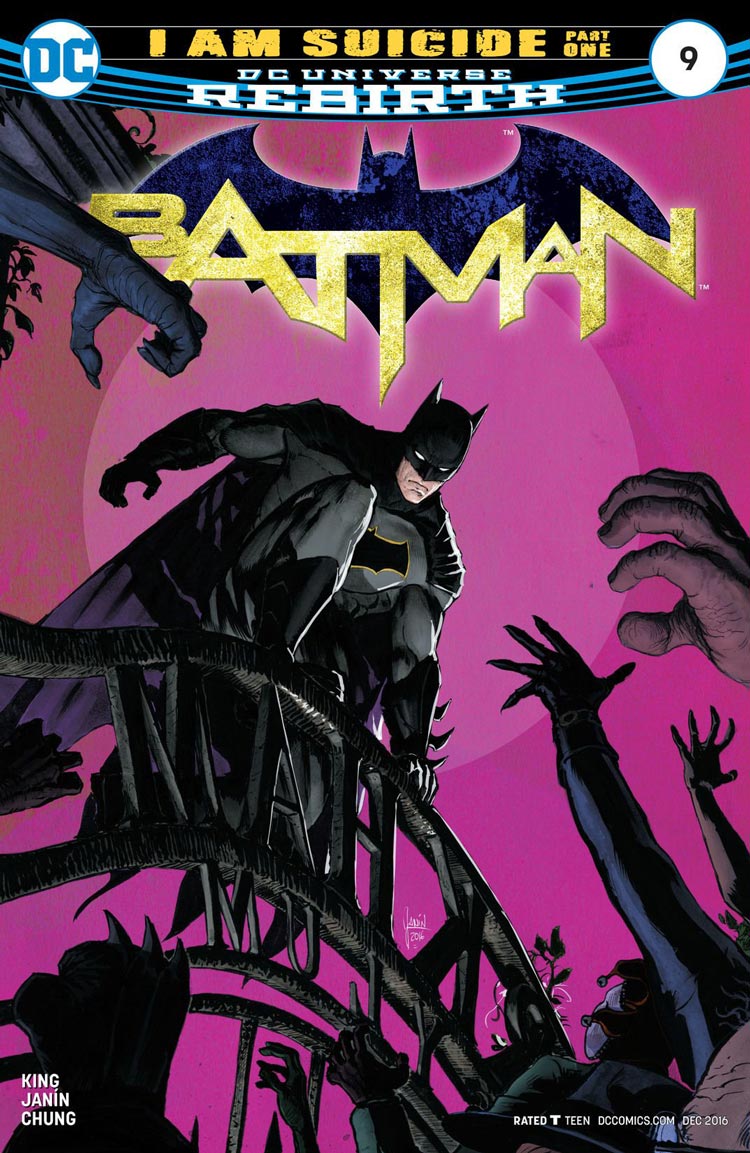 …the Legion of Super-Heroes

Crazy as it sounds, the only clue to the future of the future in the DC Universe is sitting in a cell in Arkham Asylum. Saturn Girl appeared out of nowhere in DC Universe: Rebirth and now is waiting… for something to happen. 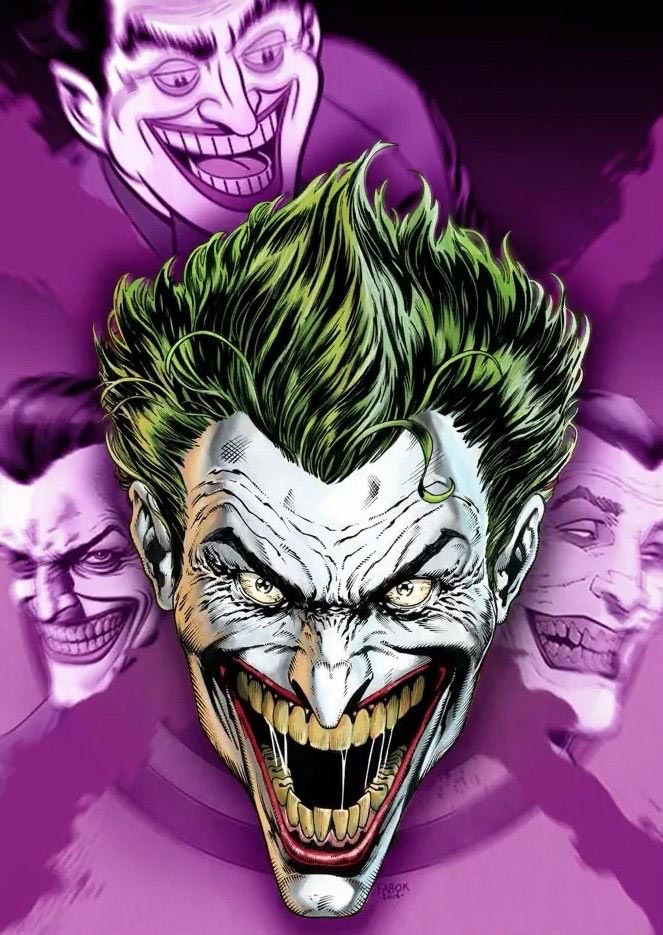 This one may take awhile. While one of the Jokers (the third, if my math is right) is appearing front and center in Dark Days: The Forge and Dark Days: The Casting, the full story of how there can be three different Jokers fighting Batman over the years is Geoff Johns’ own story to tell, according to Scott Snyder.

Will we have to wait another two years post-Doomsday Clock? Who can tell?