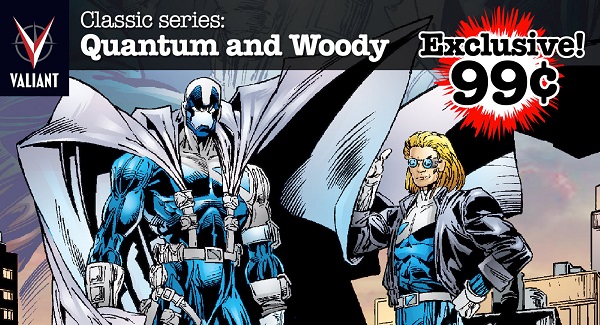 Valiant Entertainment is proud to announce a new partnership with Madefire – the cutting-edge digital comics platform – to bring Valiant’s complete library of award-winning comic book and collections to the newly launched “Print Books” storefront on Madefire’s iOS and Android apps.

Celebrating traditional comics in the digital space, Madefire now features an honest and simple reading experience with a page-view interface and pinch-and-zoom navigation called Print Books. Alongside the benchmark reading experience in Motion Books, digital comics and graphic novels in their authentic form will now be available via Madefire’s In-App Purchases directly on your mobile, tablet and web devices.

Featuring day-and-date releases of Valiant’s latest monthly titles – including X-O Manowar, Unity, Rai, Armor Hunters, The Delinquents, and more – the critically acclaimed comics publisher will soon make available its complete back catalog of best-selling comic books and graphic novels, beginning today with the launch of the Quantum and Woody Classic 99-Cent Sale – the first ever Madefire-exclusive sale on the iOS and Android platforms.

Featuring the complete run of Christopher Priest and M.D. Bright’s seminal series – including Quantum and Woody (1997) #0–21 and #32 – rediscover one of the most beloved series of the past two decades through Madefire’s exclusive 99-cent sale before Priest and Bright’s Q2: The Return of Quantum and Woody #1 (of 5) arrives in stores this October.

“Valiant is enthused and excited to join Madefire’s expansion into day-and-date digital releases and back catalog releases,” said Gavin Cuneo, CFO & Head of Strategic Development for Valiant Entertainment. “Valiant has one of the most cherished libraries of content anywhere in the history of comics, and, with Madefire’s recent expansion into ‘Print Books,’ we look to at last making it available for Madefire’s passionate audience of fans and readers around the world.”

“Valiant are producing some of the best looking books in the business right now, thanks to great talent and a stable of classic characters,” said Madefire Co-Founder and CCO Liam Sharp. “We’re thrilled to be able to bring not only their ground-breaking motion books to the Madefire app, but also their extensive back catalog of print material, featuring many fondly remembered gems.”

Established in 1989, Valiant has sold over 80 million comic books, and today its characters continue to be forged in publishing, licensing, film, video games, and beyond. Since its summer 2012 publishing relaunch, Valiant has returned to the fore as one of the most commercially and critically successful independent publishers in the industry today with an initial slate of titles that included X-O Manowar by New York Times best-selling writer Robert Venditti and Eisner Award-winning artist Cary Nord; Harbinger by New York Times best-selling writer Joshua Dysart and Harvey Award-nominated artist Khari Evans; and Archer & Armstrong by the New York Times best-selling creative team of writer Fred Van Lente and artist Clayton Henry.

After multiple awards and nominations, including a 2012 Diamond Gem Award for Publisher of the Year, Valiant ventured even farther in 2013 with the debut of its first crossover event, Harbinger Wars, and the release of Unity #1 by writer Matt Kindt and artist Doug Braithwaite – the year’s highest charting debut issue from a non-premier publisher with sales in excess of 70,000 copies. This May, Valiant followed up with “Valiant First” – an all-new line of titles led by the smash-hit ongoing series, Rai, and its biggest crossover event to date, Armor Hunters. Most recently, on the heels of 16 nominations at this year’s Harvey Awards, the publisher has announced The Valiant – a prestige format mini-series from New York Times best-selling writers Jeff Lemire and Matt Kindt with art by Eisner Award winner Paolo Rivera.