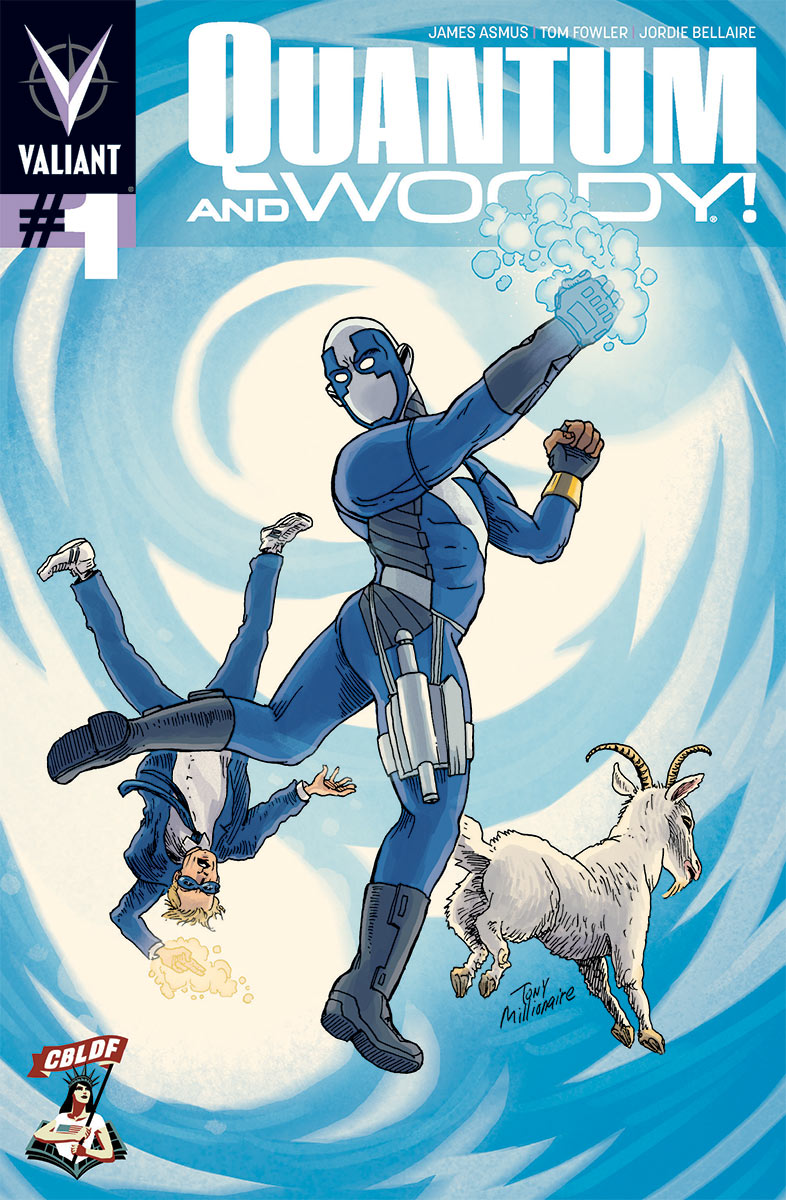 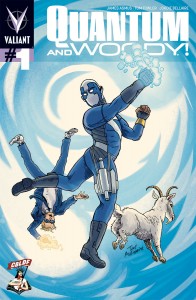 Valiant is proud to support the Comic Book Legal Defense Fund (CBLDF) with the Quantum and Woody #1 Liberty Variant with a cover by Eisner Award-winning cartoonist and underground icon Tony Millionaire – debuting this July exclusively at Comic Con International in San Diego, California! Following on the heels of the release of Quantum and Woody #1 on July 10th, this Valiant/CBLDF collaboration is notably the first convention variant cover ever produced by Valiant.

Limited to 750 copies, Millionaire’s Quantum and Woody #1 Liberty Variant will be available exclusively at the CBLDF’s booth inside the San Diego Convention Center and via the CBLDF website (cbldf.org). All proceeds will directly benefit the First Amendment legal and education work of the Comic Book Legal Defense Fund, an organization that works to protect the freedom to read.

“Valiant have been doing some of the most exciting comics on the stands, and we’re thrilled to be joining forces with them for this project,” said Alex Cox, Deputy Director of the CBLDF. “Between being huge fans of the brilliant Tony Millionaire, and the high quality of what Valiant has published so far, this is going to be a great project, and will be a tremendous fundraiser. The Valiant staff has been extremely generous, and we can’t wait to debut this in San Diego!”

“Quantum and Woody have one the most crazily passionate fanbases in comics and, with our solidified support of the CBLDF now in place, they’re the perfect choice to debut our first convention-exclusive variant cover – and all to benefit of the CBLDF’s vitally important mission. This is a very special release for us, and one that we’re incredibly proud to have produced on behalf of the CBLDF,” said Valiant CEO and Chief Creative Officer Dinesh Shamdasani.

The CBLDF benefit cover is illustrated by Tony Millionaire, a venerable cartoonist best known as creator of the comic strips Maakies and Drinky Crow. His forays into the superhero genre have been few and far between, but the non-traditional flair of Quantum and Woody make it a natural project for his unique take.

Written by James Asmus (Thief of Thieves, Gambit, The End Times of Bram & Ben) with art by Tom Fowler (MAD, Venom, Hulk: Season One) and colors by Jordie Bellaire, Quantum and Woody #1, in stores July 10th, begins the adventures of estranged, underachieving brothers Eric and Woody Henderson. When their father’s murder leads them into the throes of a life-altering scientific accident, Eric and Woody will soon find themselves with a whole new purpose – and a perfectly legitimate reason to wear costumes and fight crime. Featuring covers by Ryan Sook, Marcos Martin and Andrew Robinson – as well as a “talking”, QR code-enabled variant cover by Tom Fowler – go big or go home, folks! Quantum and Woody are coming!

You can learn more about the work of the Comic Book Legal Defense Fund by visiting them online at www.cbldf.org.