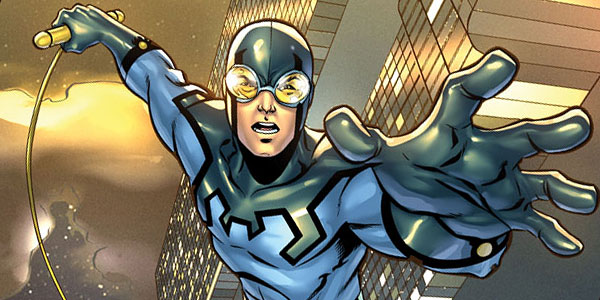 Welcome back to VILLAINS WATCH! Every big event book, be it Forever Evil or Avengers Vs. X-Men or Infinity, is an opportunity to set a new status quo and introduce new concepts to the prevailing universe. With DC’s New 52 having benched a large number of characters in its relaunch, expectation is high for the publisher to bring back some of these key figures. With Stephanie Brown already set to return in next year’s Batman: Eternal and the Metal Men gracing the cover of Justice League #28, this month we look at the returning characters who have already appeared in the pages of Forever Evil and its related titles. But first, a little recap: 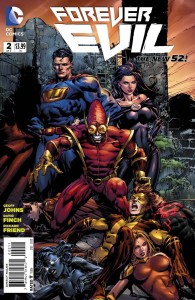 FOREVER EVIL #2
“Johnny Quick, Ultraman, Owlman and the rest of the Syndicate are slowly being explored by Johns, with crucial information about each unfurling as the issue progresses. These characters are not simply the evil mirror images of the heroes we know and love, they have their own stories, secrets and issues to deal with and Johns has me locked in on their every move.”

FOREVER EVIL #3
“[The villains] finally realize that their constant infighting had negative consequences, distracting them from the oncoming threat – something most readers probably figured out about a year ago. Personally, I’m actually rooting for Lex and his team to win the day.”

Interview with James Tynion IV on Stephanie Brown’s return in BATMAN: ETERNAL
A History of the Secret Society of Super-Villains
A History of the Crime Syndicate
Full Forever Evil Solicits [UPDATED with January and February 2014 information] 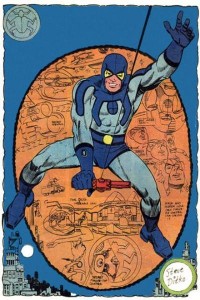 Even before the New 52, Ted Kord was out of the picture. Having died heroically — investigating and exposing the machinations of Maxwell Lord and his satellite Brother Eye — the Blue Beetle is perhaps one of the most missed heroes in the DC Universe from the last decade. He was a self-made man, not gifted with the use of the magical/alien tech scarab that both his predecessor and successor (Jaime Reyes) possessed. An acrobat, able fighter, and scientific innovator, Ted Kord eventually joined the Justice League International and became best friends with the time traveling hero, Booster Gold. But when the New 52 launched, it was decided that Jaime Reyes was to be the only man to ever have born the Blue Beetle name… yet.

With the death of Thomas Kord aboard Lex Luthor’s helicopter in the pages of Forever Evil #1, it seems the family-owned Kord Industries is without a CEO. And who better to take up the reins than Thomas’ son, mentioned briefly, who is currently a student at Northwestern University in Chicago? This is unquestionably Ted Kord, and too good a tease to not mean something big for the Azure Avenger’s return. 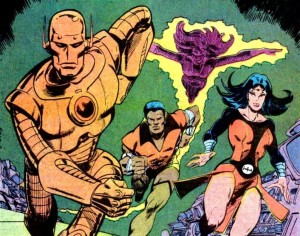 The Doom Patrol may seem like an odd concept. A man in a wheelchair accumulating a group of powerful “freaks” in order to protect the world that hates and fears them? Who would buy that? But in all seriousness, the Doom Patrol has been through several incarnations over the past fifty years — the most successful of which was probably the one written by Grant Morrison for DC’s Vertigo imprint. But right before Grant injected the team with his own brand of dada-ist weirdness, there was another team born out of the deaths of the original.

Led by Indian heroine Celsius, who could project both heat and cold from her own body, this Doom Patrol was truly one of the most ethnically diverse — which, not surprisingly, makes it attractive for a relaunch in the New 52. Tempest, an African-American veteran, could project powerful blasts from his hands and fly. Negative Woman, a Russian cosmonaut, could release a mysterious negative energy being from herself that would do her bidding. And, of course, Robotman (a character who has already been reintroduced to the New 52 in My Greatest Adventure #1) is a human brain in a formidable robot body. Identified as a new threat to be handled by the Crime Syndicate’s member The Grid, here’s hoping the Doom Patrol is set to play a greater role in Forever Evil as the months go on. 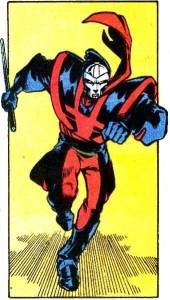 A public defender unsatisfied with a broken justice system, Mark Shaw was considered an easy target for human recruitment by the millennia old organization known as the Manhunters, android predecessors to the Green Lantern Corps. He quickly realized his error and assisted the Justice League in taking down one faction of the organization, but it was seemingly too late. Corrupted by power, Shaw ended up taking on several identities — the Privateer, Star-Tsar — and ended up in prison. While he took the opportunity the Suicide Squad offered to redeem himself, Shaw would be haunted for years, even as he reformed himself into a mercenary for hire.

In the wake of the Secret Society’s takeover, Mark Shaw (in the New 52, now an U.S. Marshall) has been assigned to locate and capture the Cheetah, becoming no less than a literal manhunter. What has yet to be determined is if Shaw will ever take on a costumed identity: Manhunter, Privateer, Star-Tsar, or otherwise. As there have been many characters to hold the name Manhunter — Kate Spencer, Paul Kirk, Dan Richards — there’s no telling if Mark Shaw will be the ultimate bearer of the title. 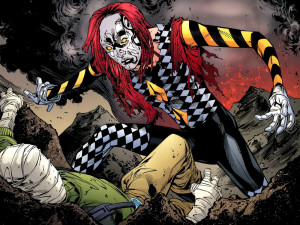 The original Rag Doll was a villain not unlike many in the Golden Age. A little funny, not too threatening, and easily handled by the likes of the Flash and the Justice Society of America. Flash forward to DC’s Infinite Crisis, and the son has now taken on the mantle to equal results terrifying and hilarious. Like his father, Ragdoll is multiple-jointed, able to twist his body into any conceivable position, but Peter Jr. had taken the extra steps of having cybernetic joints placed inside him surgically over many painful, extensive operations. He’s even had his genitalia removed, deeming them a “bother.”

As a member of the Secret Six, Ragdoll opposed the forces of the Secret Society of Super-Villains and went on the run as a mercenary for hire. Neither pure villain nor hero of any kind, Ragdoll found a brand new family in the Six, but most of those characters have yet to make an appearance in the New 52. Deadshot, King Shark, Bane, and Black Alice (see below!) have resurfaced, but we have yet to see Scandal, Jeanette, Catman, or Knockout make a return appearance. Thankfully, Ragdoll was one of the inmates of Arkham Asylum, now freed by Bane to run wild in a villain-dominated Gotham. Time will tell if history will repeat itself and find Ragdoll hooking up with other villains unwilling to toe the Secret Society’s line. 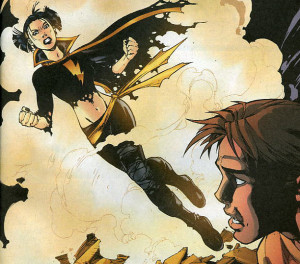 OK, fair enough. Black Alice has not reappeared within the pages of Forever Evil, but instead in a slightly questionable in-continuity crossover with He-Man and the Masters of the Universe. But you know what? I’ll take it. The Justice League there is the same as the one in the main book, so I’m calling young Lori Zechlin unbenched.

Lori was discovered by Black Canary, Huntress, and Oracle on their whirlwind tour of the United States, searching out young woman who were exhibiting new meta-human powers. Black Alice’s ability to “borrow” the powers of any other magic user manifested itself shortly after her mother’s suicide, and things rolled downhill from there. She’s a force to be reckoned with, able to absorb powers from figures such as Shazam, Dr. Fate, Raven, the Spectre, or Misfit. Ultimately, she falls in with the Secret Six, needing both a place to belong and a lucrative income to offset her father’s cancer treatments — a condition Lori may have caused accidentally with a spell.

What characters do you want to see unbenched in the remaining months of Forever Evil (don’t say Wally West or Donna Troy)? Sound off below!