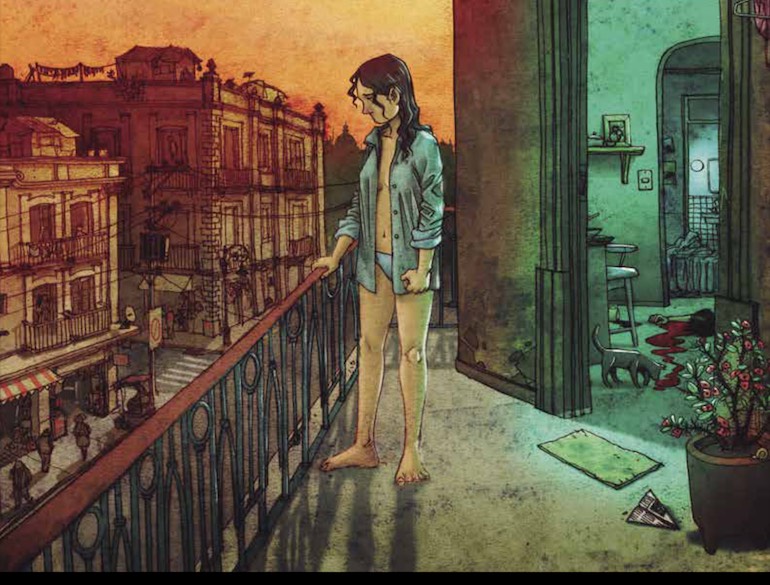 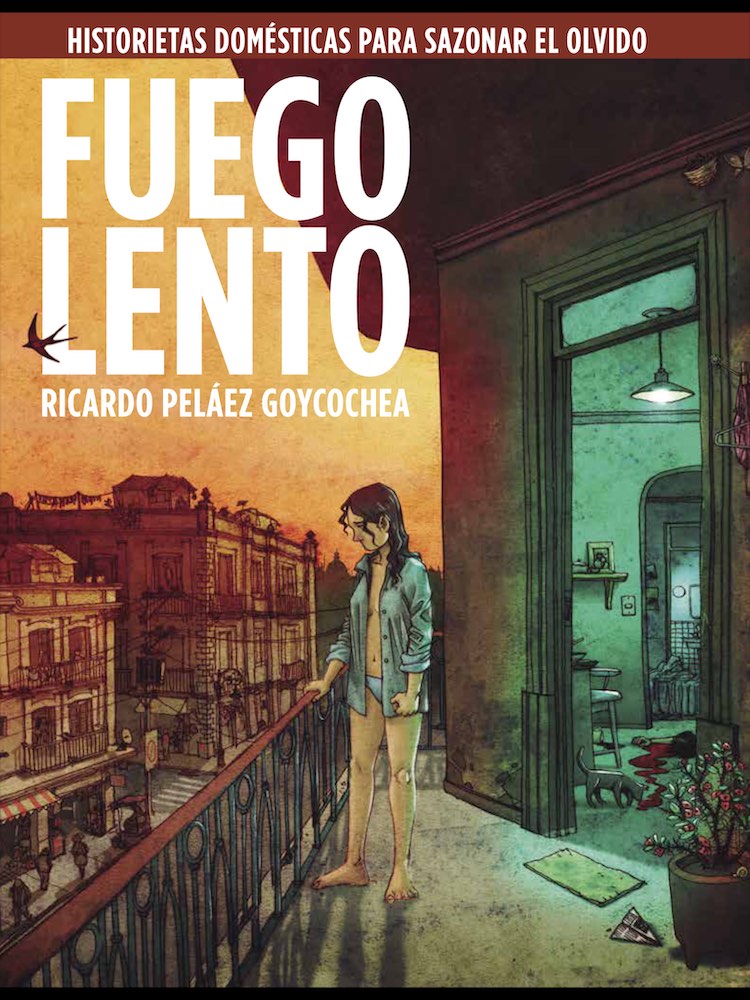 This is a city that is gradually becoming a ruin. This is a city which streets are constantly covered by puddles and its buildings are decorated with cracks. This is a city that carries a painful past and lives a brutal present. Its inhabitants move alone, but they share the same wish: the desire to be loved. They look for company, although, they only share a tense silence or hide a painful truth from each other. The possibility of connection is almost impossible. This is a city that could have a name, a precise geographic location but it is also a place in which fiction and reality share the same space. So, we wonder, we walk on the same streets, we listen to the sounds of the traffic, we saw the fights, the dogs, all the anonymous people walking as if they were hunted by their own internal monsters, and we recognize it, it is Mexico City. 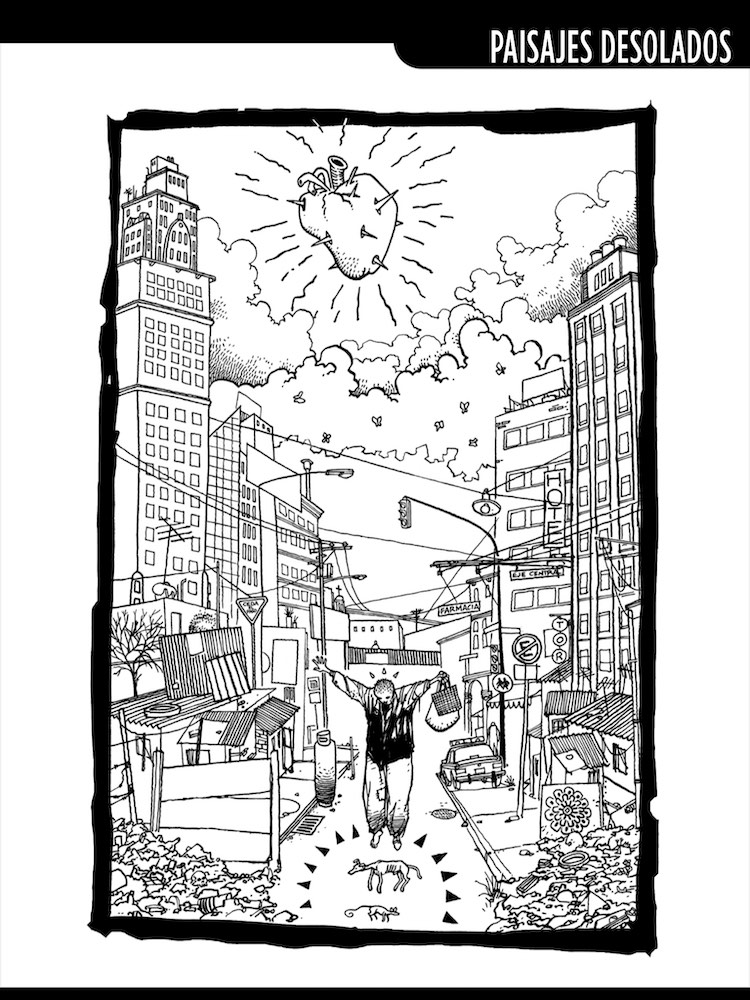 Fuego lento by Ricardo Peláez Goycochea, published by Pura Pinche Fortaleza Comics, a Mexican independent publishing house, is a collection of visual stories from 1989 to 2015, divided in stylistic and thematic segments. The titles of these sections express, sometimes with a poetic language and sometimes with a violent realism, the everyday experiences of the people that live in this city. In this sense, Fuego lento is a collection of portraits that narrate the life of identifiable characters such as labourers in construction, corrupted police officers, unhappy married couples, that represent the pain, violence, and loneliness present on a contemporary society.

Furthermore, Fuego lento shows the long artistic career of the author that goes back to more than twenty years ago. Ricardo Peláez Goycochea was part of the graphic artist group El Taller del Perro, which existed from 1999 to 2002, that promoted the participation of illustrators and comic book artists in different activities (that included editing, teaching, and self−publication) with the main goal of consolidating comics as a form of art in Mexico. Moreover, El Taller del Perro worked on the promotion, dissemination, and creative research around independent and alternative comics in the country, making it an important reference on the graphic narrative’s scene. In this sense, Fuego lento also represents Pelaez’s creative work done during the existence of this artistic initiative, showing his intention to create comics that did not respond to the industrial and commercial demands of that time. 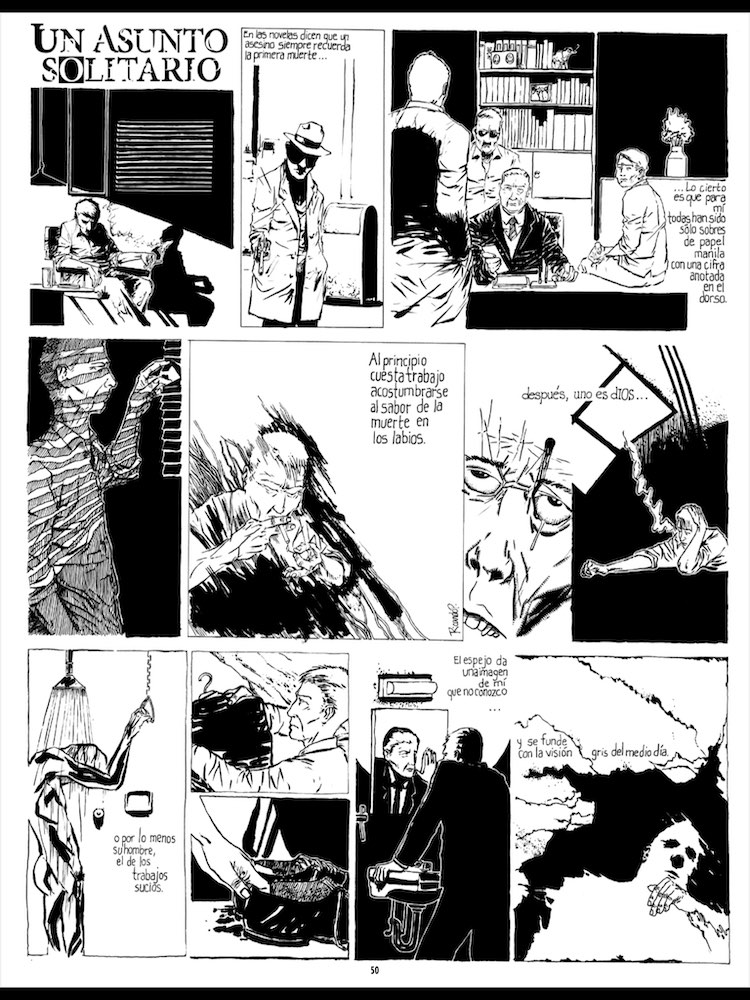 Ricardo Peláez Goycochea was also one of the founders and collaborators of the disruptive and unconventional comics magazine El Gallito inglés, later known as El Gallito Comics, one of the first independent publications of alternative comics during the decade of the nineties in México. Several influential artists, such as Edgar Clement, author of Operación Bolívar, and Peláez himself, created this magazine as a space for comics that did not follow the trends of the decade. On the contrary, this publication was dedicated to a culture of rock, urban, sci-fi and detective narratives, which are also present in the anthology A fuego lento.

This anthology also shows Peláez’s influences in which Ray Bradbury could be mentioned, especially on the comic Un asunto solitario, and his collaborations with other creatives such as Rolo Diez, scriptwriter of the comic Últimos días de la víctima, based on the namesake novel by José Pablo Feinman, a thriller that places its protagonist, a professional assassin, into an intricate dynamic that puts his work and life at risk. The visual style of these comics is reminiscent of the work of Eduardo Riso (creator of 100 Bullets in collaboration with Brian Azzarello), in which the use of high contrast in black and white, allows the author to explore different ways to tell a suspenseful story and explore the expressive possibilities of a silent panel.

Additionally, the short story Refundación, included in the section Límites exteriores, shows the interest of the author on exploring different genres such as noir and dystopian narratives, that nonetheless point to contemporary realities. Since, frequently, by recurring to an explicit style, the author narrates with brutality and forcefulness, how terrible life can be on the limits of the city and how far a dominant subject can go to satisfy his desires. 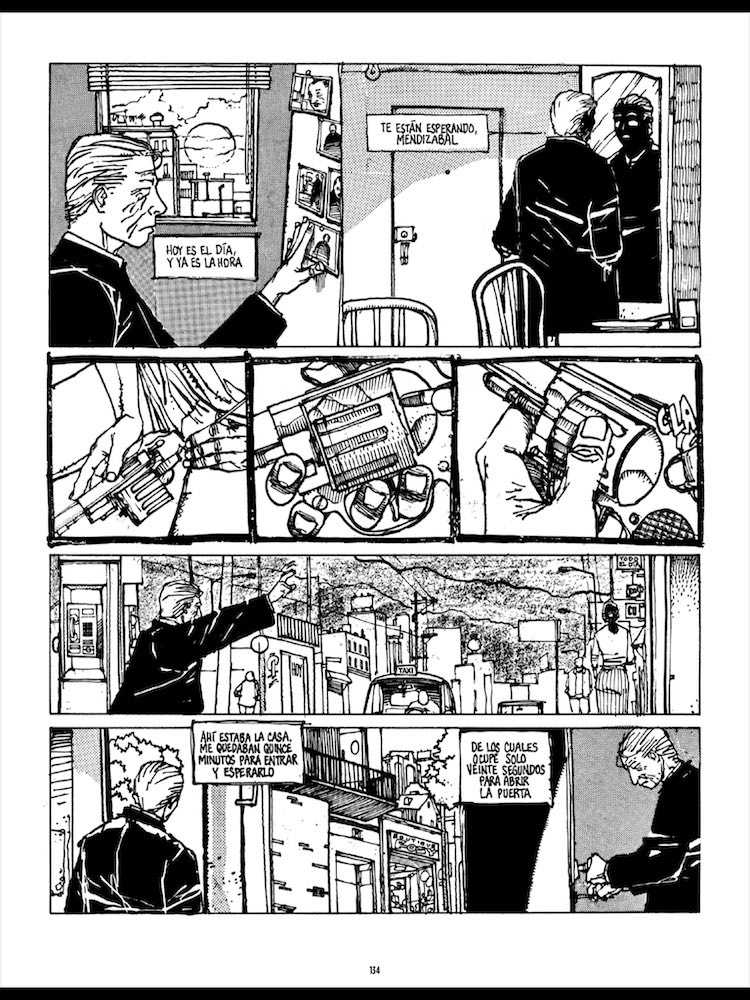 On the other hand, the collection also has a sample of the author’s ability to use the colour in a metaphorical way, as it is showed in the section named Poética del color, specifically in the comic Fin de ruta, in which Peláez takes distance from the realistic and explicit tone, to narrate the story of separation and grief of a broken couple. The comics included on this section are an exploration of textures, colours, and techniques to represent a state of conscious. Therefore, the stories have a personal and more intimate tone, furthermore, the plasticity of panels add a level of significance to the narrations.

It is noticeable the relation of the subtitle of this collection (Historias domésticas para sanar el olvido) and the narrations mentioned before, since precisely these words describe the stories that conformed this volume, narrations of the everyday life, stories that try to conciliate with the past by understanding the present, images that watch us from the page and ask us to see them, to recognise them, to give them meaning.