Marvel Comics has released the cover for Incredible Hulk #6, the first arc of a Smash-tastic collaboration between Mark Waid and Walt Simonson. 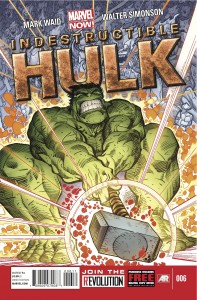 It’s off to Jotunheim, the land of the Frost Giants as Bruce Banner and his lab team embark on an all-new secret mission for S.H.I.E.L.D! Caught trespassing by the local natives, they’re going to need the help of the mighty Avenger, Thor!

“The Marvel Universe’s two most powerful heroes — the Hulk and Thor — join forces to quell a centuries-old war between Godlike forces,” says Axel Alonso, Editor In Chief, Marvel Entertainment. “But first, they’ll throw down in a slugfest to prove who’s more worthy to wield that pesky hammer.  It’s an epic tale featuring two of Marvel’s most popular characters, told by two creators at the top of their craft.”

Marvel NOW! is the culmination of Marvel ReEvolution, the groundbreaking new initiative to evolve the comic book experience through innovation. With Indestructible Hulk, Marvel NOW! ensures fans will discover an entirely new perspective on the Jade Giant.

“Banner claims that he’s taking his crew to Jotunheim in search of a specific element that exists only at Frost Giant temperatures,” said writer Mark Waid in an interview with Marvel.com. “But Bruce has a hidden motive, as well. The real fun of it is how Bruce and his team get to Jotunheim in the first place; it’s a nifty piece of applied science, if I do say so myself.”

Each issue of Indestructible Hulk includes a code for a free digital copy on the Marvel Comics app for iOS and Android devices. Additionally, each issue of Indestructible Hulk features special augmented reality content available exclusive through the Marvel AR app – including cover recaps, behind the scenes features and more that add value to your reading experience at no additional cost.

An all-new direction! All-new threats! All-new piles of rubble! This is Hulk NOW!

This April, Mark Waid and Walter Simonson bring a brand new perspective to the phrase “HULK SMASH” in Indestructible Hulk #6!