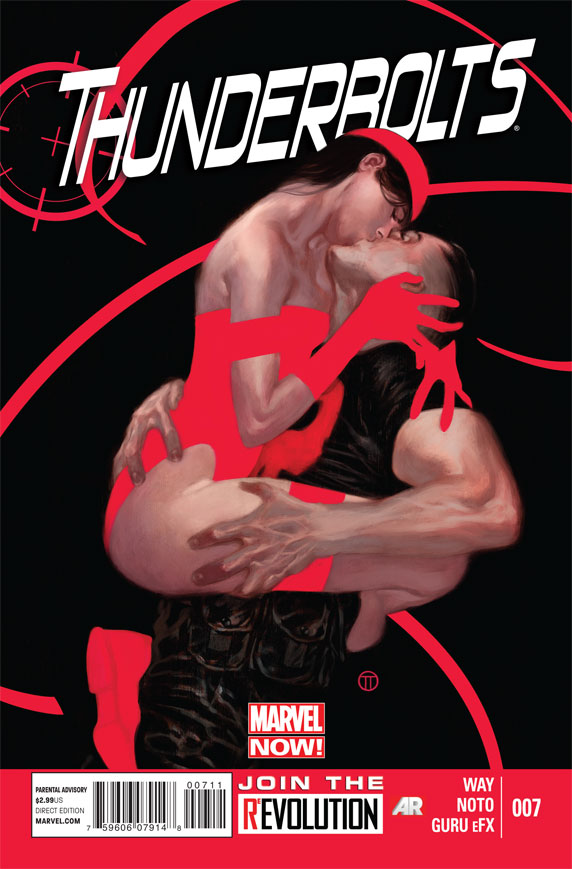 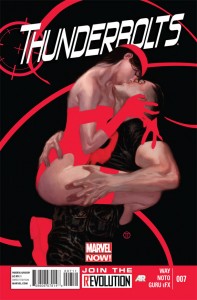 New York. NY—January 14th, 2013— This April,  love AND betrayal are in the air as red-hot artist Phil Noto (Uncanny X-Force) joins superstar writer Daniel Way in Thunderbolts #7! As part of Marvel NOW!,  Thunderbolts turns up the action and brutality, as the industry’s top creators join the top Super Heroes to deliver the best ongoing stories, great for new and lapsed readers alike!

The Marvel Universe’s deadliest strike team take on a legion of robot menaces as the Punisher, Deadpool, Red Hulk, Elektra and Venom, paint giant targets on their back!  But when the leader of these weaponized Crimson Dynamos has close ties to someone on the team, everyone is a target!

“Get ready for battlefield romance like you’ve never seen before,” said Axel Alonso, Editor In Chief, Marvel Entertainment. “Hip-deep in dead bodies and empty shell-casings, two of Marvel’s fiercest killers — the Punisher and Elektra — will collide like magnets, with serious ramifications for the Marvel Universe’s premiere wetworks team.  Where sparks fly can fire be far behind?”

Marvel NOW! is the culmination of Marvel ReEvolution, the groundbreaking new initiative to evolve the comic book experience through innovation. With Thunderbolts, Marvel NOW! ensures fans will discover an entirely new perspective in the adventures of a brand new team.

Each issue of Thunderbolts features special augmented reality content available exclusive through the Marvel AR app – including cover recaps, behind the scenes features and more that add value to your reading experience at no additional cost.

An all-new direction! All-new threats! This is Thunderbolts NOW!

This March, Daniel Way and Phil Noto bring the pain in Thunderbolts #7!