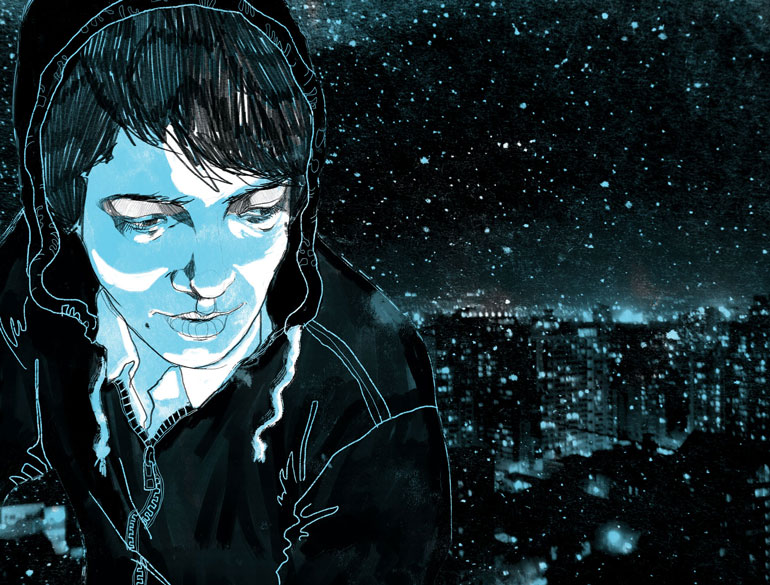 Considering how volatile and intricate the visual arts can be nowadays, we cannot claim that there is only one way to express an idea, a story, or even a feeling in visual language. Even so, it is rare to find works that really experiment with the possibilities of the visual language.

That is why discovering graphic novels that truly explore different ways of telling a story becomes interesting and one example of this is Al sur de la Alameda Diario de una toma by Lola Larra and Vicente Reinamontes. This graphic novel was published by Ediciones Ekaré Sur (2014) and explores how a story can be told by different narrative mechanisms. Diario de una toma has two editions and has won several prizes since its publication such as the White Raven in 2014, the Fundación Cuatrogatos Prize in 2015 and the Australis Prize for Best Design in 2014. 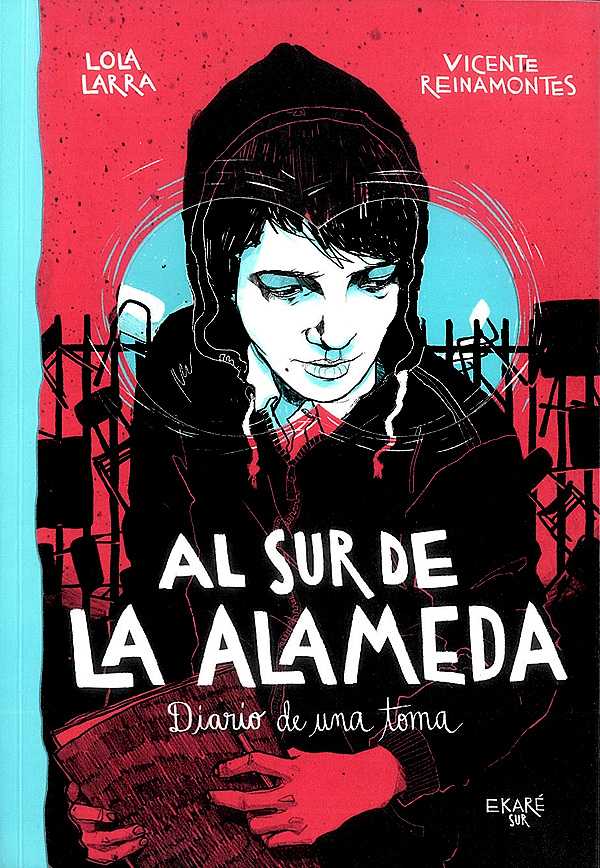 This graphic novel is situated in Santiago de Chile in May of 2006 in a controversial political context: The Penguin Revolution. This social movement was defined by student protests and school occupations against the new education law, the social inequality in Chile, and the idea that considers education as a business and not a right. Despite the intense political tension, Diario de una toma focuses its attention on what happened in one school with a certain number of young students.

As the titles describes, Diario de una toma is the journal of a young man named Nicolas, a student from a private Secondary School in Santiago de Chile, who suddenly takes part in the occupation of his school. Apparently, he has nothing to do in the strike but the circumstances he has to face during the occupation gradually transform the way he conceives his reality. Nicolas is a football player — more specifically a goalkeeper — of his school’s football team, but he is not the archetypical athletic and superficial boy. Even when his main reason to become part of the strike was to stay close to Paula, a girl he likes, he gradually realizes that she is not the most important reason. By getting involved in the strike, Nicolas comes to understand the implications of his actions and the importance of its repercussions. So he establishes a link between his way of thinking and his way of acting and becomes conscious of his political and historical reality.

It is important to say that this graphic novel is not the description of the process of a young boy becoming a man. Diario de una toma is more complex and explores how an intense political experience can be described trough the adolescent’s point of view.  By writing his journal, Nicolas produces a personal chronicle of the events that happened inside of the school during the occupation, but more importantly, he creates a voice and an identity. Through the exercise of writing, the young narrator shows his political conscience and his level of knowledge about the social conditions of his country. In the process of self-narrative writing, Nicolas presents to the reader all of the events through his personal point of view. 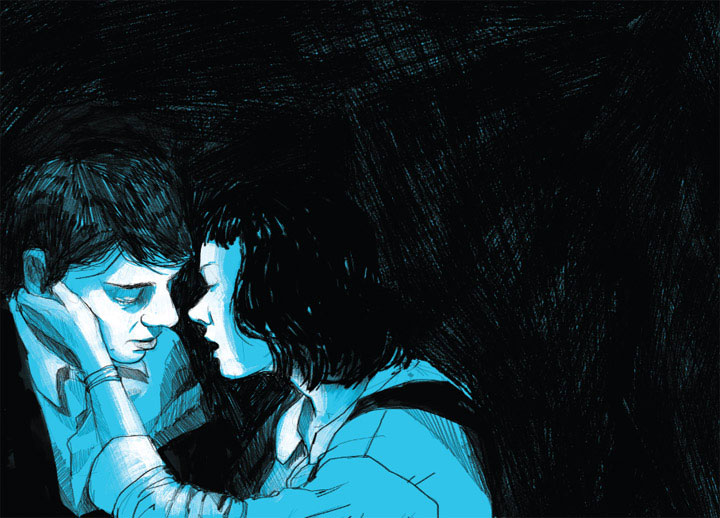 There is something interesting about how the point of view changes along the book. At the beginning of the story, Nicolas is presented under the watchful eye of a mysterious character that has an important role in the story. This character becomes the first narrator of the story and put the protagonist in a particular place and time, but more importantly, places the protagonist in front of the reader’s eyes.

It is also significant how this graphic novel encourages the reader to explore different ways of reading the images and see the words.  On one hand, the image fills the page — as in The Invention of Hugo Cabret by Brian Selznick — in a cinematographic treatment with close-ups and enlargement images. And on the other hand, there are some pages filled with text in the format of conversional literary novel. These narrative strategies show the connotative qualities of the picture and the possible meaning of the words. Diario de una toma shows that an image can be polysemous. Many possible meanings can coexist within it and presents words that can be interpreted in many different ways.

At this point, one might say that this graphic novel explores what can be seen by the images and what can be said by words. This graphic novel does not give more importance to either of them and explores the relation between words and images by placing them on one page and creating a bond through panels and word balloons. Diario de una toma searches the relation between visibility and readability by the process of telling a story. With this strategy, this graphic novel appeals to the reader and invites him to break the associations with the binary relation of the word and the text. 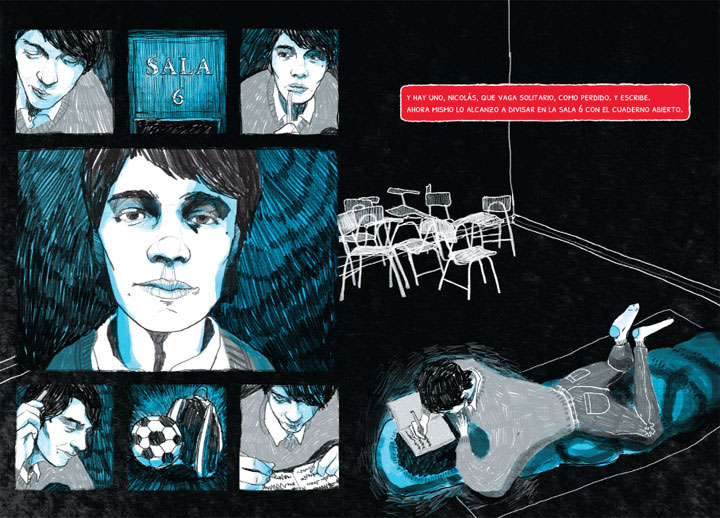 Ultimately, we must see the images for more than what they visually show — and furthermore for what they suggest. Diario de una toma explores the relation between the visible and the invisible, the said and the unsaid. In Diario de una toma the images and the words do not reproduce a literal scene, space, or situation. It produces a visible form that signifies itself. Moreover, the images and the words are not copies; they are not duplicates of a real thing.

With every word that Nicolas writes, he delivers his testimony, his memory to an implied and symbolic reader that becomes real every time an empirical reader approaches to the graphic novel. At this point, we might discuss if Diario de una toma is in fact a graphic novel rather than a novel with images. We can affirm that it is a graphic novel, because it emphasizes the relation between the words and the images by the creation of a language in which these both interact. This interaction creates the narration of a political and social event through the perspective of a witness who gets involved in the action. Nicolas is not a passive observer that simply goes with the circumstances. Furthermore, he creates a simple but strong belief that allows him to accept and understand his past and his present.

The writer and the illustrator of this book use various elements of the graphic narrative (such as the use of word and images in a comic format) and fills the page either with a large image or only text. But these strategies are redefined by emphasizing the use of silence and the subjectivity of the image. Sometimes, the image is not completely clear and invites the reader to interpret and complete the blank spaces between the actions by deducing the connotative references of the image. 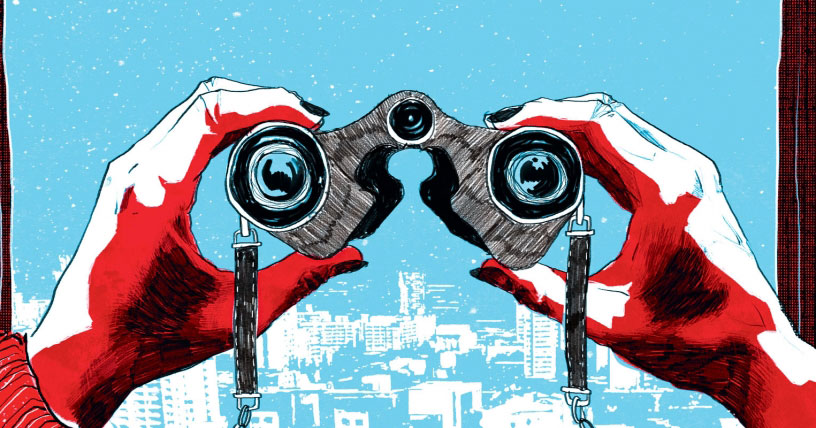 It is also important to emphasize that this graphic novel illustrates the creation of a voice, but more importantly, shows how a political situation can be expressed by an unexperienced person in the process of knowing himself. Diario de una toma is not a moralistic book, but places a different voice in real context. Diario de una toma is in fact a book that explores the possibilities of language and the creation of a particular narrative.