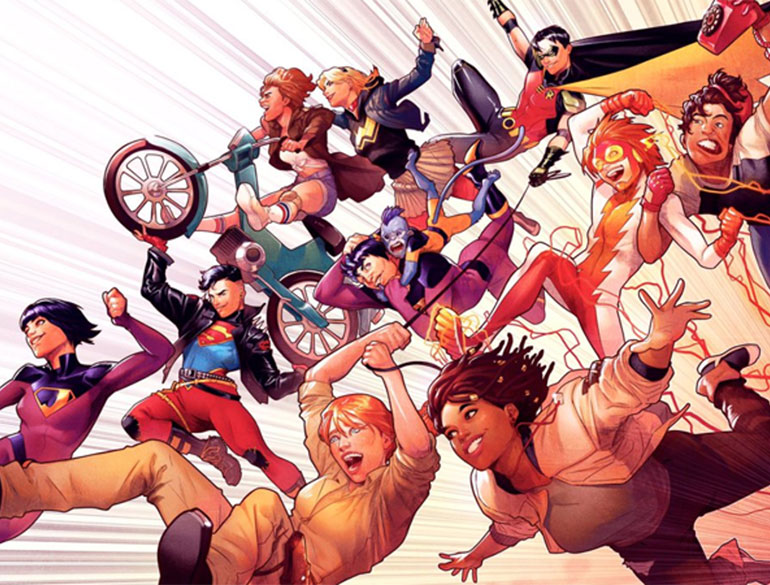 In some ways looking back on the original Young Justice run that started back in the 90s can come off as a bit of a rough ride.

One of the first villains the team (which started with Robin, Superboy, and Impulse) faced was a character called Mighty Endowed, a busty catgirl who literally couldn’t stand on her own power. One of the early villains, the first to be used across multiple comics, is simply called Harm, a pure 90s character who drips with edginess. 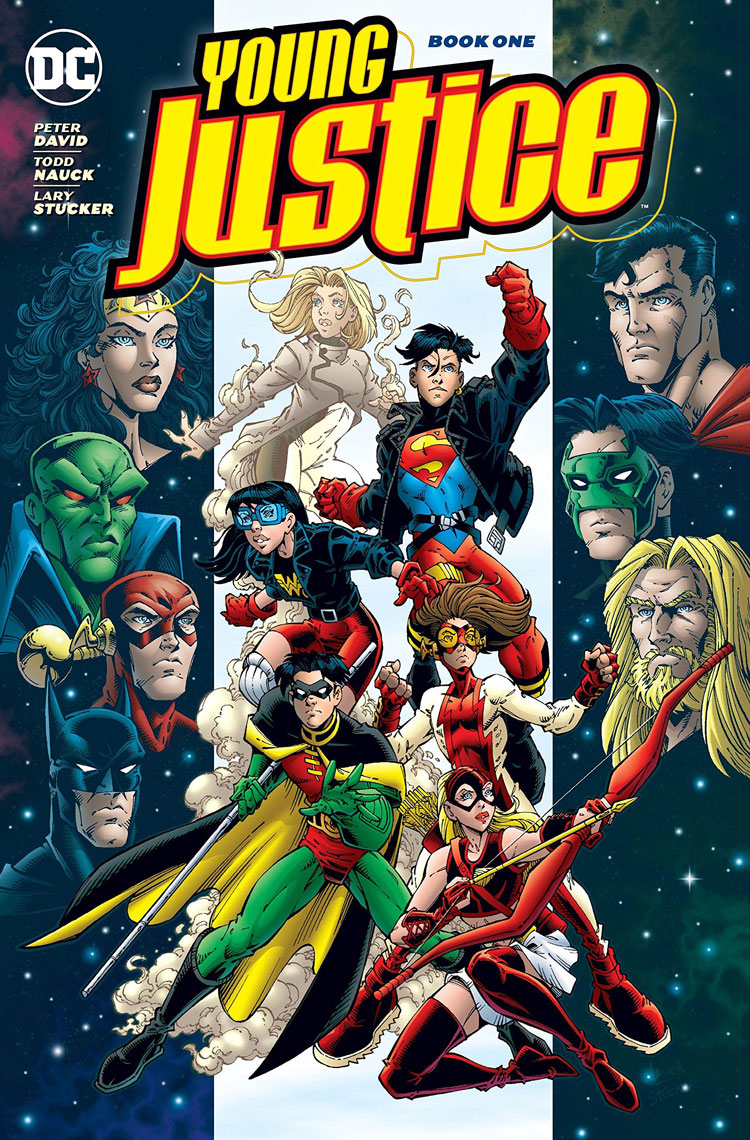 The comics industry in the 90s was a time when artistic trends were pushing barriers into new styles and stories, and it cannot be said that Young Justice holds up in terms of quality, but does that mean the comic is bad?

Far from it! In fact, having gone through multiple issues to prep for this article, I am struck by how much emphasis is placed on the foundational Young Justice characters acting like young kids and teens. This was always part of what made the series enjoyable as a contrasting title to the more serious New Teen Titans, but I challenge anybody to not feel something when Cassandra (Wonder Girl) becomes friends with Secret, or when Robin and Superboy crack terrible, meta jokes to the pop-culture trends of the day.

By no means are some of the more ridiculous aspects of the comic wiped away (save for those who has nostalgia from having read the series when it was released), but there is something important about friendship as a key comic theme when it supersedes combat-driven action. 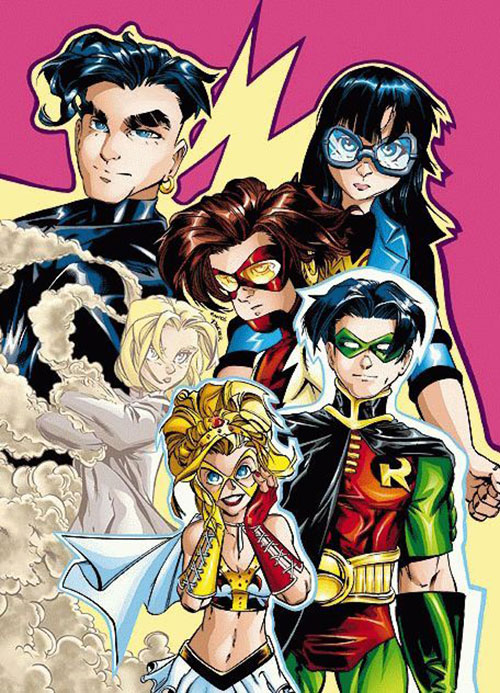 Depending on how long you’ve been reading comics, it might seem strange to some readers that many of the “sidekick” characters who have populated DC Comics brands were, once upon a time, not always depicted together, let alone having lives outside of their mentors. Teen Titans was a fantastic comic, but as I mentioned before it was just capable of becoming a tragic soap-opera concerning Dick Grayson’s love life as it was showing the team fighting Trigon, Deathstroke, and Brother Blood.

Young Justice took an extreme take on allowing their characters have crushes on one another, binge on junk food, play around, and be kids. Perhaps no character needed this kind of treatment like Superboy and Robin (Tim Drake). Given the fact he was a young version of Superman, writers gained the ability to sort of re-define who and what Superman was. Obviously, Kon-El was his own character, but he was a branch of the Superman mythos that was rooted on Earth since both Clark and Kara were, well … not. Showing Kon’s youth and adolescence was something readers never really got to see from Clark. 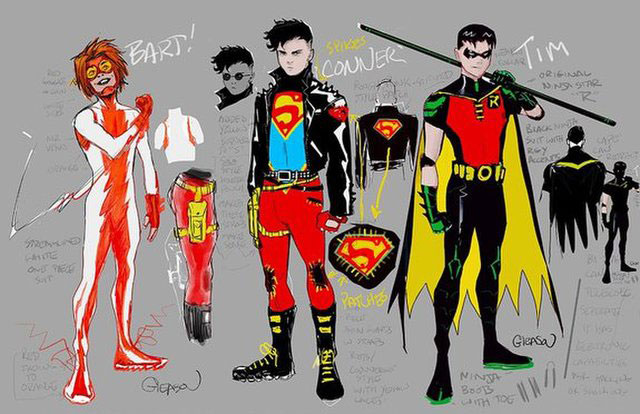 The Tim Drake incarnation of Robin also benefited from having an active adolescence. While Dick had been in comics from his fictitious childhood, by the 90s many new readers never knew him as Robin, he had become Nightwing and was a leader in his own right. Tim was a new Robin for a new generation. Tim appeared in 1989, but the 90s were when his character really came into his own, a feat which Young Justice contributed to greatly.

While it might not be one of the biggest moments readers might focus on, there is a genuinely tender moment when Cassandra is speaking with Wonder Woman about the costume she had been given by Donna Troy. In terms of Cassie’s design, the Young Justice incarnation of the character was drawn at the start with a black jacket (remember, 90s), gloves, glasses and knee/elbow pads. Cassie explains she has kept the outfit in a bag to make sure it stayed safe until she felt she was capable of honoring it properly. Was this just a meta way of addressing the design choices that had lead to Cassie’s look at the time not being adjusted? I am not positive, but I found the moment touching and in line with what being a kid is like. Sure, it can be fun and exciting, but it can also be anxiety inducing.

Depending on how you’ve been raised, it seems reasonable to think that some kids are going to compare their own accomplishments to those of their siblings and parents. Cassie’s outfit being ‘her own thing’ stands out as the kind of touch which would have worked in a comic like New Teen Titans (I mean, hey, Dick thought his disco-centric outfit was suitable during the 80s, right?), but it was what made Young Justice enduring. In fact, the whole nature of Cassie’s costume evolution showed her youthful exuberance as well as the trends of the reading audience. One of her most iconic looks was when she wore denim jeans and a simple t-shirt. 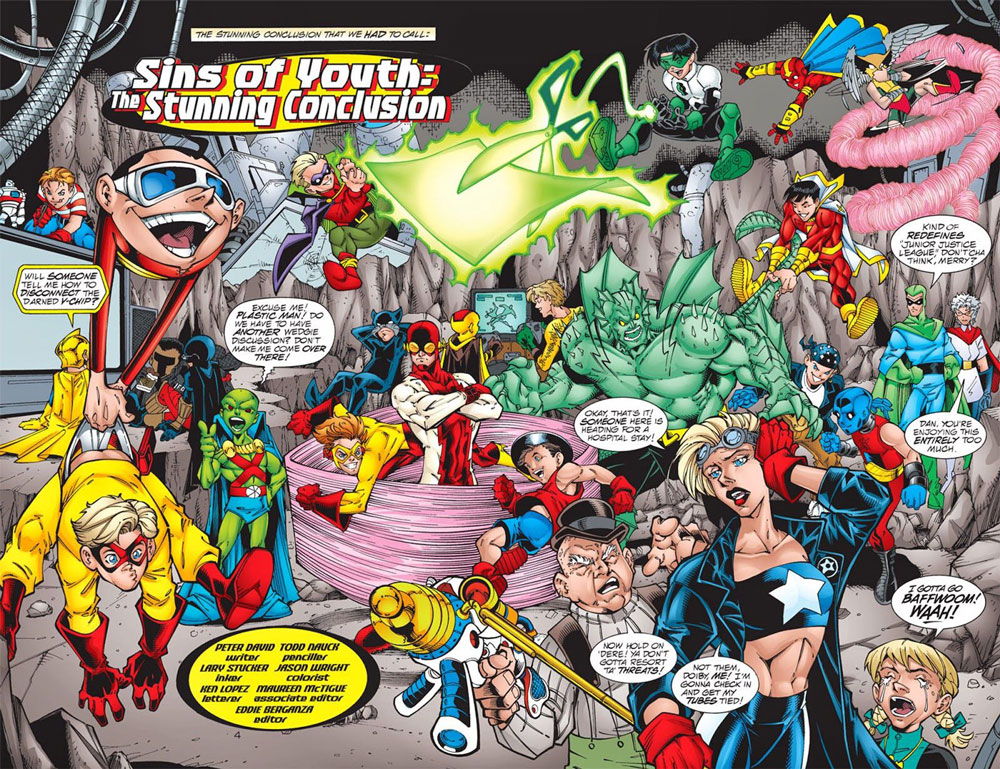 Even the schemes of the villains was oriented around youth and adolescence. During the 2000s run of Young Justice there was a two-part comic called “Sins of Youth.” Writer Peter David and artists Todd Nauck and Jason Wright put out what I consider to be the best Young Justice story where (bum bum bum!) Klarion the Witch Boy uses his power to turn iconic heroes into children. Some people might remember this kind of story having been adapted in different forms via the Justice League and Young Justice TV shows?

In the first issue of the two-parter, Cassie gives a speech about the way teens with super powers are feared by society. Young Justice wasn’t the first comic to engage with being a super-teen, but I would offer that it was the first to really capture the zeitgeist of the moment for readers of teen age when Peter David was writing the series.

So, why does this retrospective on Young Justice really matter? In some ways I hope it highlights how comics from different decades can be dated in hindsight yet still be both heartwarming and iconic. 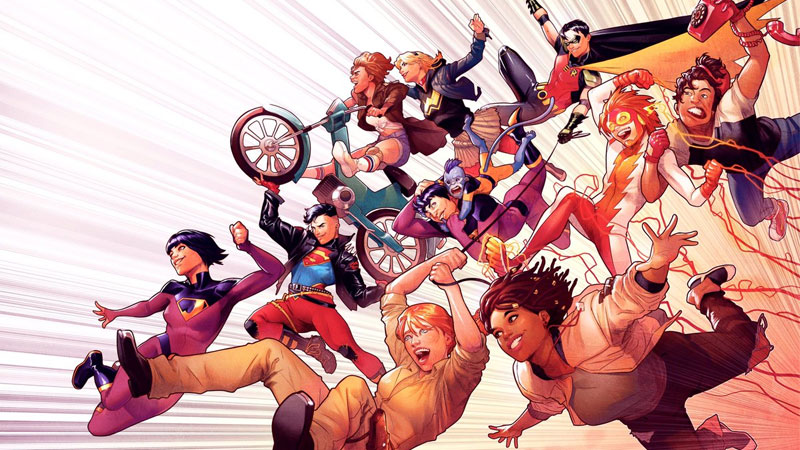 With the announcement of Brian Michael Bendis’ relaunch of the Young Justice title, I’d argue a look back on the foundations of the 90s series is important. Bendis is going to be putting Conner and Bart Allen back into their former roles as founding members of the team. Depending on your views of the New 52 universe, the lack of these characters can be seen as a sore spot for many. The return of these characters alone is worth a read through of the first issue when it comes out in 2019, but I think there is more to Young Justice than the members of the team. The comic about youth, right?

I hope a new generation of young readers picks up Young Justice #1 and discovers the same heart that Peter David brought to his run of the title’s roots. Personally, I believe that Young Justice, far more than Superman, is the kind of comic that Bendis was born to write for DC Comics.

Good luck, Brian. There are a lot of people out there who adores the adventures of Tim, Conner, Cassie, Bart, and Secret. I hope that 2019 is a great year for the Young Justice brand, not only because of the third season of the animated series, but because new stories featuring young, hopeful characters can explode on a comic scene that desperately needs these sorts of stories out there.