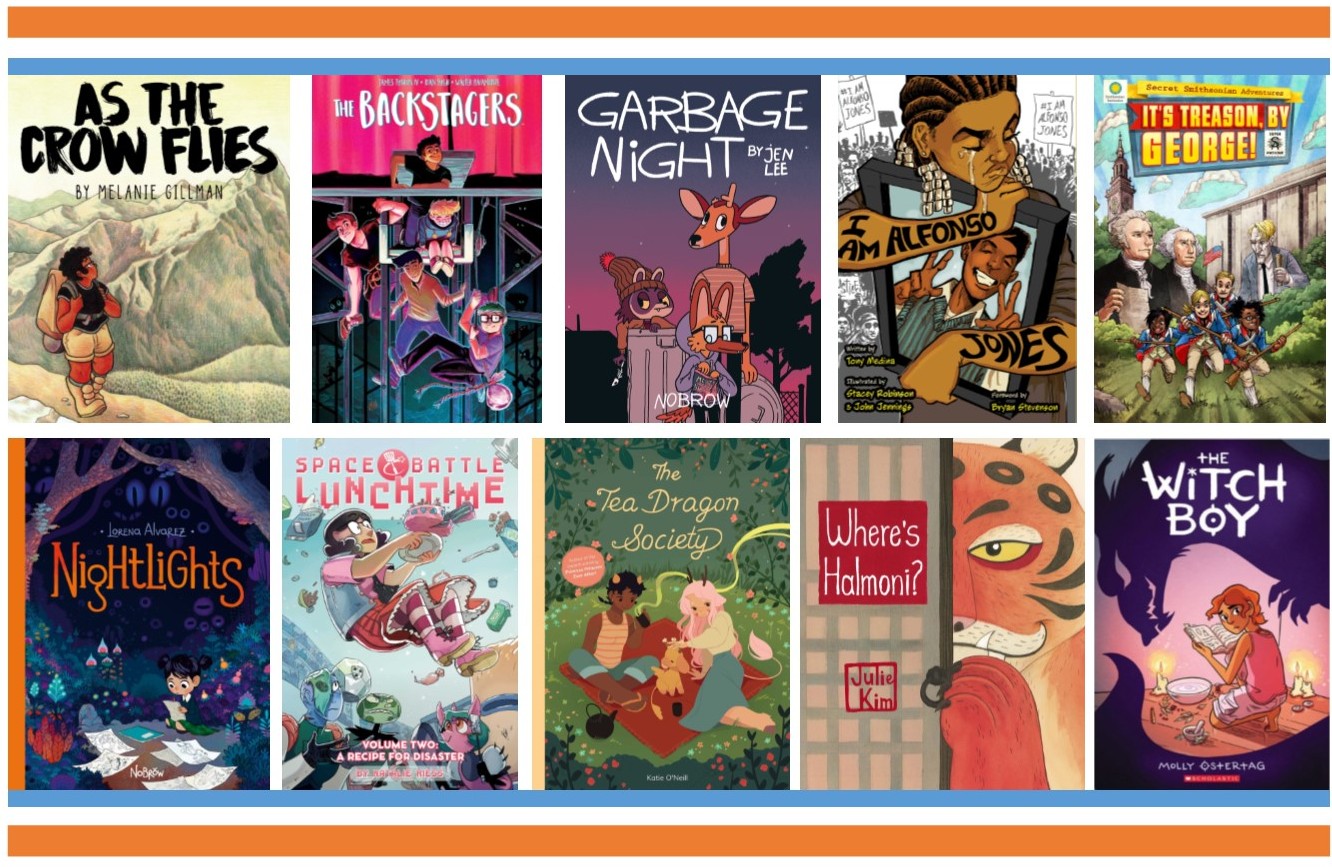 Kids Read Comics has announced the shortlist for the annual Dwayne McDuffie Award for Kids’ Comics, which will be handed out at the Ann Arbor Comic Arts Festival on June 16.

The award honors the pioneering comics and animation writer who cofounded Milestone Media and created the teen superhero Static among others. Judges seek out excellent comics aimed at school-aged children and young teens and score the work on four main criteria: Quality, Timelessness, Originality and Diversity.

After reviewing over 100 books published in 2017, the judges narrowed the field to a list of ten that showcase today’s amazing variety of comics for young readers: books that cover a wide range of topics, including fiction and nonfiction, from many viewpoints and in distinct voices.

On this year’s shortlist are:

​As the Crow Flies, by Melanie Gilman, features Charlie Lamonte—thirteen years old, queer, black, and questioning what was once a firm belief in God—during a summer vacation stint at an all-white Christian youth backpacking camp.

The Backstagers Volume 1: Rebels without Applause, by James Tynion IV and Rian Sygh, follows transfer student Jory to an all-boys private high school, where he’s taken in by the only group that doesn’t treat him like a new kid, the lowly stage crew known as the Backstagers.

Garbage Night, by Jen Lee, takes readers to a barren and ransacked post-apocalyptic suburbia, where a dog named Simon—along with his two best friends, a raccoon and a deer—scavenges for food and awaits the return of the hallowed “garbage night.”

I am Alfonso Jones, by Tony Medina, Stacey Robinson and John Jennings, stars an African-American teen who loves to play trumpet and dreams of playing the lead in his school’s hip-hop rendition of Hamlet, but who becomes the victim of a police shooting, and watches from the afterlife as his family and friends struggle for justice.

It’s Treason, by George! by Steve Hockensmith, Chris Kientz and Lee Nielsen, takes four friends on a time-traveling adventure to undo the work of plotters who have turned American history upside-down and replaced over two hundred years of democracy with the rule of monarchs.

Nightlights, by Lorena Alvarez, introduces Sandy, who catches the tiny stars that appear out of the darkness each night in her bedroom, and creates wonderful creatures to play with and make drawings of…until one day a mysterious girl appears who knows all about her nighttime secrets.

Space Battle Lunchtime Volume 2: A Recipe for Disaster, by Natalie Reiss, ushers in the season finale of Space Battle Lunchtime, but finalist Peony (the only Earth contestant) is nowhere to be found—she’s been kidnapped and taken to the set of her show’s biggest rival, Cannibal Coliseum, where chefs compete to cook…each other!

The Tea Dragon Society, by Katie O’Neill, tells the story of Greta, a blacksmith apprentice, who becomes entwined in the enchanting world of tea dragons—discovering a lost tea dragon in the marketplace, and learning the dying art form of tea dragon caretaking from a pair of kind tea shop owners.

Where’s Halmoni? by Julie Kim, joins a young Korean girl and boy on a search for their missing grandmother—a search that leads them into a fantastical world inspired by Korean folklore, complete with mischievous goblins, a greedy tiger, a clever rabbit, and a wily fox.

Witch Boy, by Molly Knox Ostertag, finds thirteen-year-old Aster up against the rules of his magical family, where all girls are raised to be witches and boys grow up to be shapeshifters—for instead of conforming, Aster doesn’t shift, and continues to pursue his fascination with witchery…no matter how forbidden that might be.

This year, the judges for the Dwayne McDuffie Award for Kids’ Comics are culture critic, reviewer and podcaster Ardo Omer; librarian Alenka Figa; and artist and comic shop worker Shayauna Glover. They have been assisted by Edith Donnell, a Kids Read Comics cofounder and youth and teen librarian.

The full list of books considered for the award can be found at the end of this a2caf.com post.

Previous years’ winners were Hilda and the Black Hound by Luke Pearson, Awkward by Svetlana Chmakova and Ghosts by Raina Telgemeier.

Kids Read Comics is a Michigan-based nonprofit that hosts the annual Ann Arbor Comic Arts Festival in collaboration with the Ann Arbor District Library. A2CAF is a free, weekend event for kids, teens and adults that features over 50 artists and writers and a full slate of interactive programs including many hands-on workshops. Guests at the 2018 show include comics artists and writers Maris Wicks (Science Comics: Coral Reefs, Human Body Theater, Primates), Judd Winick (Hilo, Pedro and Me), and Mark Siegel (Sailor Twain, Long Night Moon, 5 Worlds).

A2CAF is immediately preceded by A2 Inkubate, a one-day conference for educators and librarians that’s aimed at helping them use comics successfully in their professional settings, and includes cartoonists with whom they can collaborate in advocating for comics.