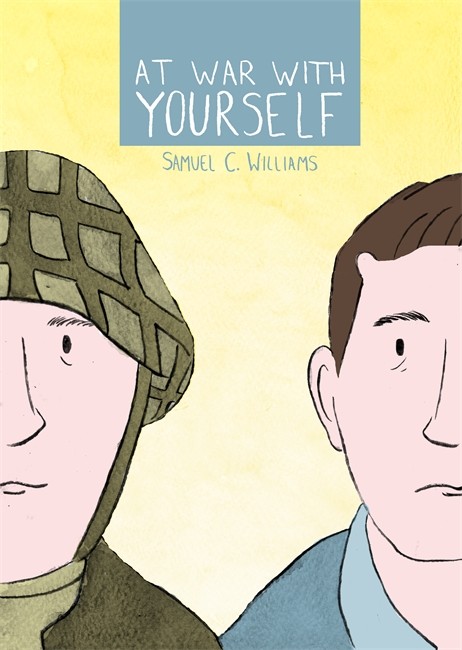 With this iteration of 52 In 52, my goal was to whittle down my “to-read” pile, a terrifying stack that exists in both the real world and digital that has a very real possibility of injuring someone when it falls over. This project would have me knocking one title off that list every month and, with the help of my friends, highlight some really diverse titles from all around the world of comics: new, old and in-between.

So, naturally, what I did this week was read something that wasn’t on my read pile. While walking through my local library, this title caught my eye and, upon reading the synopsis, I couldn’t leave it there. I have no personal experience with PTSD, but the thought of reading a comic that dealt with such an important topic just felt like something that needed to happen. So, here we go:

With At War With Yourself, Samuel C. Williams examines Post Traumatic Stress Disorder through conversations with his friend Matt, a former British soldier who has battled PTSD. Williams’ conversational style of cartooning is immersive from the very first page, and throughout the comic I felt like I was a third person in his conversations with Matt, just standing there passively listening – but present nonetheless. The biographical nature of this story made it feel immensely personal and made the message resonate all the more effectively. Williams deftly pairs visuals that are basic, but engaging, with text that drives the story forward, such as his discussions with Matt in the park while Matt plays fetch with his dog. These visuals are well crafted, don’t get me wrong, but they didn’t distract my thoughts from the subject at hand, and what the characters were saying. They also acted as a strong visual representation of what sufferers of PTSD can feel at any given time.

In a very short story, Williams covers a lot of ground with Matt, from triggers to treatment, to life going forward. At no point does this story ever feel rushed, though, more like the reader gets to spend an afternoon with two friends talking in the park. Williams does not dwell on the incidents that have caused Matt’s PTSD, either, never going for the gratuitous visuals or looking to horrify the reader. He focuses more on the struggle with the disorder, and I appreciated that he prefaced the entire story with the fact that PTSD is not limited to those who have suffered in the military. While Matt’s story, and that of many others who suffer PTSD are based on traumas that occurred while serving in the military, PTSD is not limited to combat based trauma and it is obvious that Williams has researched this topic heavily before creating this comic.

At War With Yourself is an entertaining and enlightening read. PTSD is being recognized in society more each year, but as with anything in the realm of mental health, our societal understanding and acknowledgement has a long way to come. Comics like this one by Samuel C. Williams are a fantastic example of how art and the comics medium can educate about any topic and make any subject relatable to a reader.

Check back next week for another edition of 52 in 52!