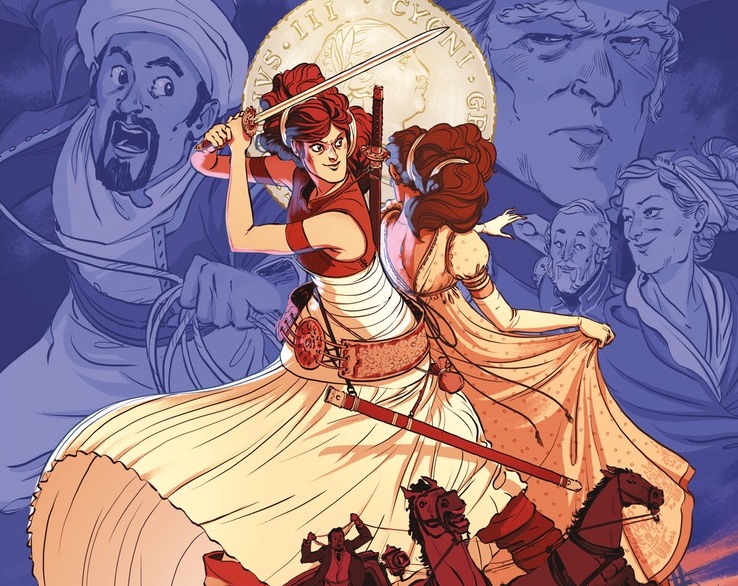 52 In 52 is back!!! With a vengeance? Maybe. It’s back with a twist. In the initial iteration of this column, I aimed to review an arc of a series from Marvel Unlimited each week for an entire year. It was a slog. It was tough. So, for the reborn 52 In 52, I called in some friends. Mexi Gremillion, John Ernenputsch and Doug Zawisza will be joining me on this adventure on a rotating basis, each of us taking on things we’ve meant to read, but haven’t gotten around to it. There will be classic comics, indie comics, mainstream new-ish events….and everything in between.  I have the esteemed pleasure of starting off the fun with a fabulous OGN by cartoonist Tony Cliff, Delilah Dirk and the King’s Shilling. 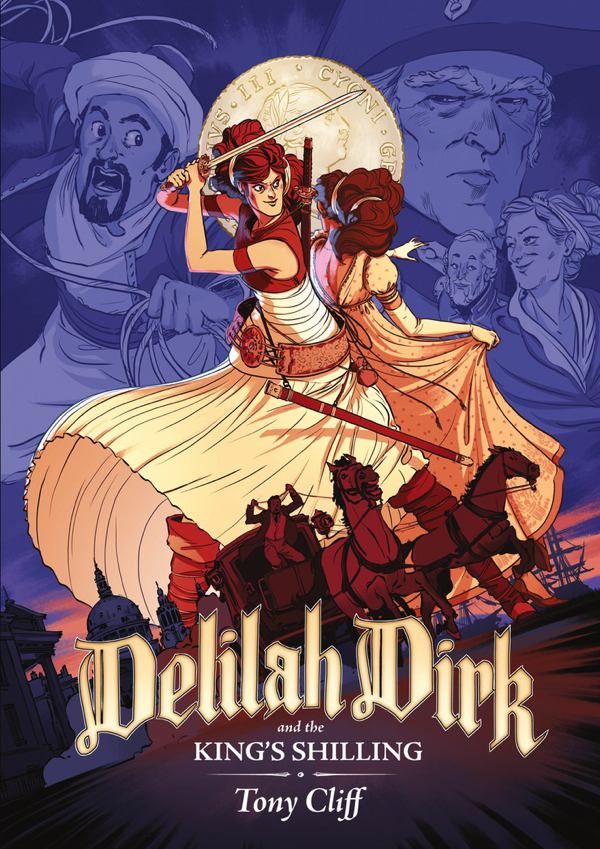 DELILAH DIRK AND THE KING’S SHILLING

Delilah Dirk: an amazing young woman who can out sword anyone. Stubborn as hell, a crazy capable fighting force and a vigilante who does the right thing.

Major Jason Merrick: white privilege personified. A despicable soul who has no loyalty and would like nothing more than to disparage Delilah Dirk’s good reputation.

Mister Selim: Delilah’s right hand man, Mister Selim makes a killer cup of tea, proving himself to be a better sidekick than Robin ever dreamed of being.

The gist: Delilah helps out a family in France, then crosses paths with Merrick who uses her as a distraction for his own nefarious plans. To clear her name, she and Selim head to England to track Merrick down and kick the stuffing out of him. Oh, and Delilah’s from England and much of her family doesn’t know about her life as Delilah….

The thoughts: YEAH BABY. This is one of the most enjoyable reads I’ve had the pleasure of experiencing in a long time. Delilah is a remarkable character with spunk, a spirit of adventure and moxie to spare. Cliff kicks off this volume with an impressive amount of action but what I loved the most about his fight sequences is how kinetic they are. His penciling style is perfect for sword fighting sequences and the intensity of the action is tempered brilliantly by humour. Every action sequence in this fantastic volume reminded me of Indiana Jones, and by the end of this story Delilah firmly entrenched herself as one of my favourite characters in comics.

This story is paced brilliantly, and I love the shift to England. It completely changed the dynamic of the story without sacrificing the spirit of adventure. Seeing the second side of Delilah’s life and the situation that puts Mister Selim in is comedy gold and shows the bond between these two characters. Cliff has crafted a great relationship between the two and while I’m not sure if it will turn romantic at some point or not, I’m not overly compelled to want it to. He’s set things up nicely in that there’s a framework for romance in that they are close friends should he choose to go that way, but they could also stay friends and the relationship would not feel hollow. This is masterful writing and pencil work, as you can see these characters care for each other in his artwork alone.

This piece really is just a rave piece, as I loved every single bit of Delilah Dirk And The King’s Shilling. The story progressed beautifully and even though I started this series in the second chapter, I didn’t feel completely lost at any point. I felt so immersed in this world that I ordered the first volume in the middle of reading this, cause I need more Delilah Dirk in my life. This is a great adventure series for anyone to read, but if you have pre-teen or teen girls in your life, I highly recommend you introduce them to Delilah Dirk.

You can check out a sample of the awesome that is Delilah Dirk over on DelilahDirk.com!!!