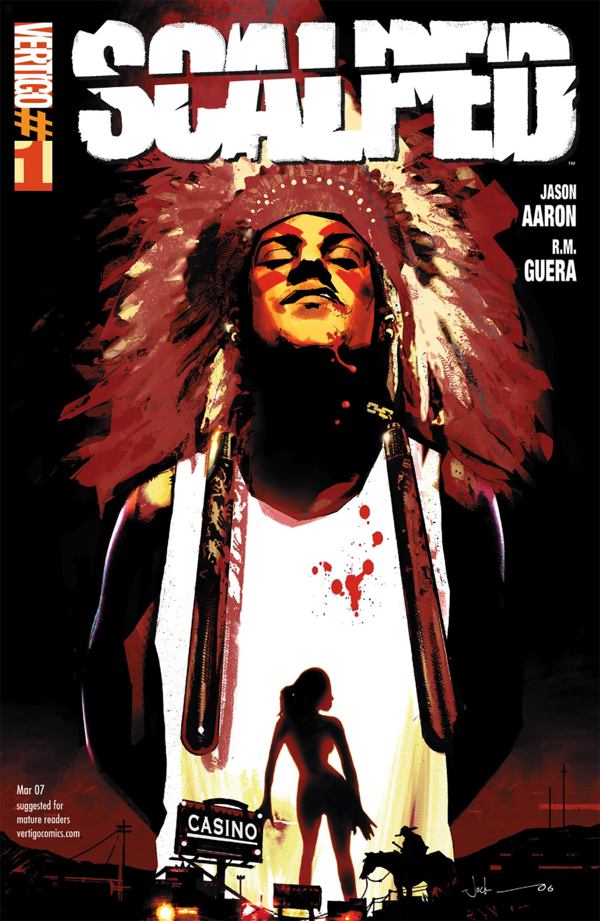 I’m a fan of a LOT of Jason Aaron’s other work, but missed the launch of Scalped and decided to ride that out, avoiding the title as much through ignorance as purpose. Now that it’s complete (and has been for almost five years now) it’s high time for me to dig into it and see what I missed.

To disclose as much as possible, I’m reflecting on Scalped: The Deluxe Edition Book One. This beautiful package carries a thirty dollar pricetag and collects the first eleven issues of Scalped in one gorgeous hardcover edition along with some backmatter that includes cover concepts from Jock, the artist who handled most of the series covers as well as a script from Aaron for the first issue of the series. Admittedly, this collection might have been a bit more than I anticipated. Or maybe I was a little preoccupied with other tasks when I should have been reading this.

Whatever the case, it only took ten years from the original publish date of Scalped #1 and now for me to pick up this book. And become a fan of the series.

Before I go any farther, let me say that Scalped is filled with flawed human beings. They take the concept of “flaw” much farther than “turned in an assignment late” or “maybe ran a light that was more red than yellow”. These flawed folks in Scalped are living lies, perpetrating crimes, and ruining lives. Sometimes those lives are their own, but more often than not, the bodies or relationships (or both) left in the wake of the main characters belong to someone not named Dashiell Bad Horse, Lincoln Red Crow, or Catcher. Sometimes the casualty cuts close to home for the residents of the Prairie Rose Indian Reservation in South Dakota. 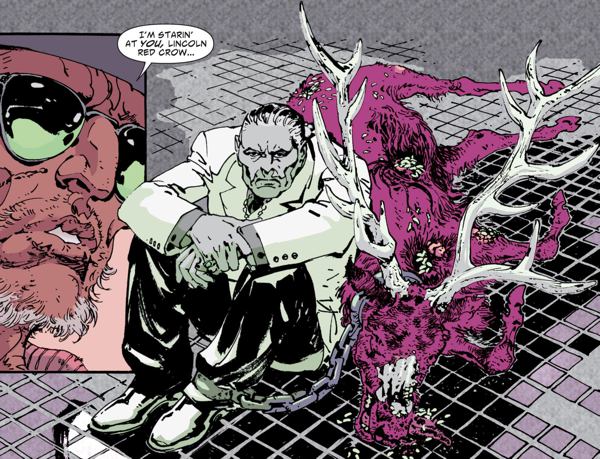 The beauty about Scalped, however, is that Aaron manages to construct a compelling story around generally despicable people. Chief Red Crow runs most (if not all) of the criminal activities on the reservation, trading the souls of the people he leads for personal gain that is thinly masked as philanthropic community interest.

Scalped opens with Bad Horse – the star of the story – returning to the reservation he grew up on, mere days before Red Crow cuts the ribbon to open his Crazy Horse Casino. From there, there are a lot of fans, and a lot of crap hitting them, starting with Bad Horse hitting the floor, but making quite a show of it on the way down.

This sets up a relationship between Red Crow and Bad Horse that twists in unpredictable ways throughout Scalped, as each harbors secrets. As the story expands, so too does the cast. Aaron shifts central characters into the spotlight, giving readers time to get to know Dash Bad Horse, Lincoln Red Crow, Gina Bad Horse (Dash’s mother), Catcher, Dino Poor Bear, and Diesel. The story hops between present day, near present day, and any date between “now” and June 26, 1975, when the members of the Dog Soldier Society wound up with the blood of FBI agents spilled on their hands. The Dog Soldier Society involves Catcher, Red Crow, and Gina, among others, but those three are critical to the past tense tale and its present-day impact.

Both tales – the present and the past – are relevant throughout Scalped, and neither one is quickly nor cleanly resolved. By the end of this volume (Scalped #11), one member of the cast is scalped and several other players teeter on the brink of permanent, devastating changes. 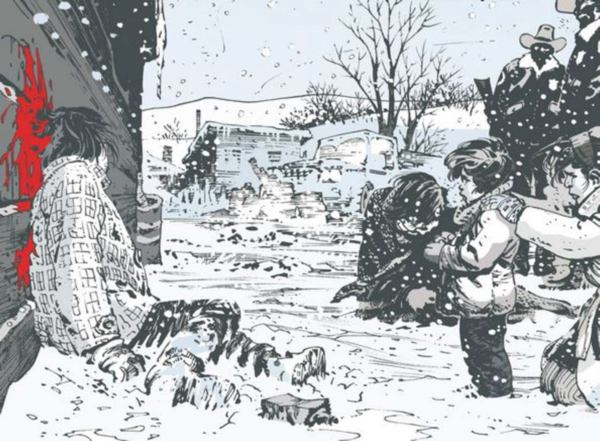 And that doesn’t even touch on the fact that Dash is an FBI agent. Yeah. You read that right. In making that adjustment, Aaron adds layers of complexity to Dash and to the greater Scalped saga.

M. Guéra turns in pitch-perfect work on this Vertigo tale. Edgy folk living dirty lives in a forsaken place is enough to cobble up images of Bill Sienkiewicz or Denys Cowan art, which Guéra comes close to, but remains far enough away from to be unique. Scalped is filled with detail, but soaked in shadows, gritty, rough, and worn down. The coloring combo of Lee Loughridge and Giulia Brusco stain the pages in earth tones and embers, absorbing the shadows and reflecting them back with heat. They drop in cooler (but just as uneasy) scenes toned in gray, but the majority of this edition is rich with terra cotta, orange, red, yellow, and amplified mixes of all of the above.

In the issue devoted to Catcher, the palette opens up a bit, bringing in some brighter, more saturated magenta and purple tones, but that is impacted by the narrative, giving the colorists prominence in the tale.

Guéra gives the whole cast definitive, distinct personalities, postures, and silhouettes, which definitely helps readers ease into their immersion in the pages of Scalped. The story itself goes to dark places, and Guéra takes readers there, but never does he sacrifice storytelling for iconography. Every panel feels and looks deliberate. The shot choices in those panels equally deliberate. Aaron has had the privilege of working with a number of artists that are well-suited to their artistic assignment, and Guéra on Scalped is another fine match.

Even though it’s ten years old, Scalped is a wonderfully relevant tale about the hardships of life on the reservation and the presence of wrongdoing there. Magnified through the recent Dakota Access Pipeline developments, Scalped seems even more potent today than it might have been a decade ago. 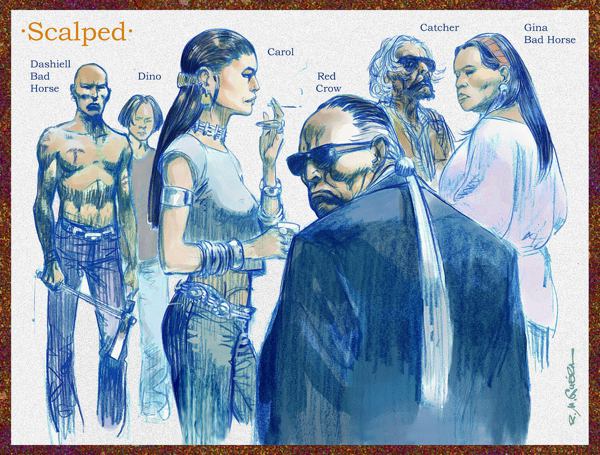 More relevant and potent or just as relevant and potent today as it was during its initial release, Scalped is a punch to the gut. Jason Aaron and R. M. Guéra give readers a classic story of family and betrayal, community and murder. Everything is Scalped is a moving piece, and nothing is as it appears. And no one is worth cheering for, but Scalped is still a gripping, undeniable story. Some of the story beats seem predictable, but even when they do slide towards the expected outcome, Aaron packs them with emotion and impact, making every revelation in the pages of Scalped a development worth savoring.

After finishing Scalped, I regret not taking a look at the series sooner. And I won’t regret recommending it to anyone looking for a gritty, harsh crime drama. This first volume is a magnificent place to start. Now I just have to track down the other four. I say it is good – washtay, as I learned in this read.