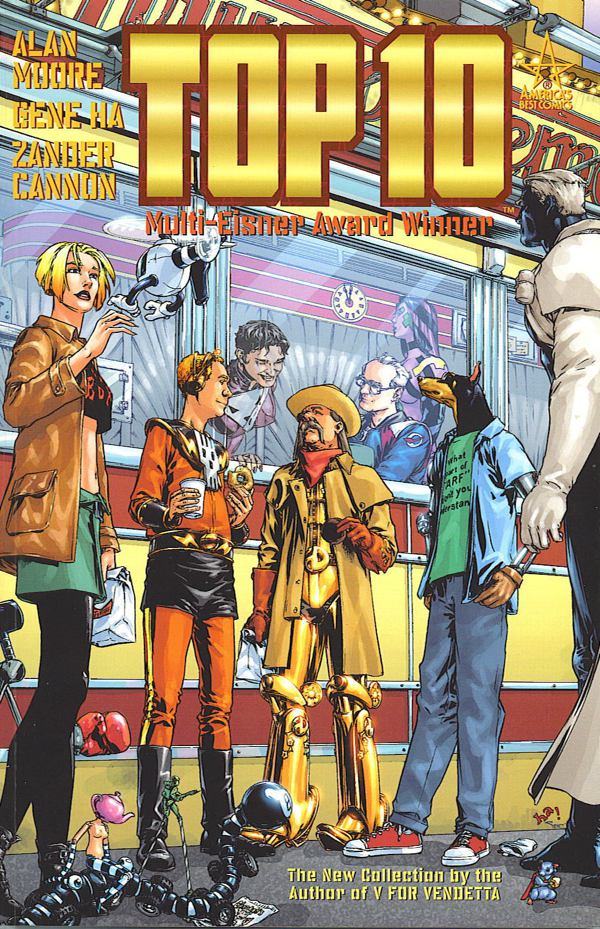 Going into my second addition to the “52 In 52” column here at Comicosity I wanted to read a lesser known comic by a legend. I think it’s safe to say that Alan Moore is considered a comic book legend, and that Top 10 isn’t one of his most popular comics. The story of the police officers that make up the Top 10 precinct of Neopolis hasn’t endured like a lot of Moore’s earlier work. When you think of Moore you think of Watchmen, or maybe his revolutionizing the character of Swamp Thing, or The League Of Extraordinary Gentleman. All of those are great works, but I don’t get why Top 10 doesn’t get the same type of love. The series really does stand the test of time, and in many cases felt years ahead of many of its contemporaries.

Top 10 was a part of Alan Moore’s Wildstorm imprint, “America’s Best Comics” with other series such as Promethia, The League Of Extraordinary Gentleman, and Tom Strong. This was back when Wildstorm was still a part of Image Comics. With Wildstorm being sold to DC, the TPBs are now sold under the Vertigo imprint. I’m not exactly sure what this means for who owns the characters, and whether it has to do with why we haven’t seen anything new from these characters in almost a decade. As far as I can tell DC has the rights to publish the series, but I won’t get into that conversation any further.

Top 10 tells the story of police officers from the eponymous Top 10 precinct in the city of Neopolis. The city isn’t your average city, and these aren’t your average police officers. You see, Neopolis is a city full of people with all different types of superpowers, and that extends to the police force. The comic feels like what would happen if you put every single superpower archetype into the same city, and forced those character to live with each other. The results are quite entertaining.

The best part of Top 10 are the characters, and how they fit into what Moore is trying to accomplish. The writer appears to take notes from TV shows like Hill Street Blues, and NYPD Blue to tell the stories of the police officers on the ground level. It just happens that these officers are on the craziest beat of them all. The series starts by introducing the reader to Robyn Slinger, who goes by the name Toybox. It happens to be her first day on the job, and thus serves as the reader stand-in character. As Officer Slinger gets introduced to her fellow officers, names start flying on by. Moore doesn’t slow down at all, and expects the readers to catch up. Arguably the most interesting character is her partner, Jeff Smax. He’s an ogre type figure that is a loner who nobody messes with. Readers at the time seemed to agree, as the Smax character ends up getting a spinoff miniseries down the line. Other characters include Sergeant Caesar, a anthropomorphic dog whose color blindness leads to some conflict with another character who uses her manipulation of color to make it appear as if she is dressed. You also have  Synaesthesia, whose name pretty much sums her powers up. Everywhere you look there seems to be a new character. It seems a bit overwhelming at first, but it pays off with the details about every supporting character making this world feel as real as possible. 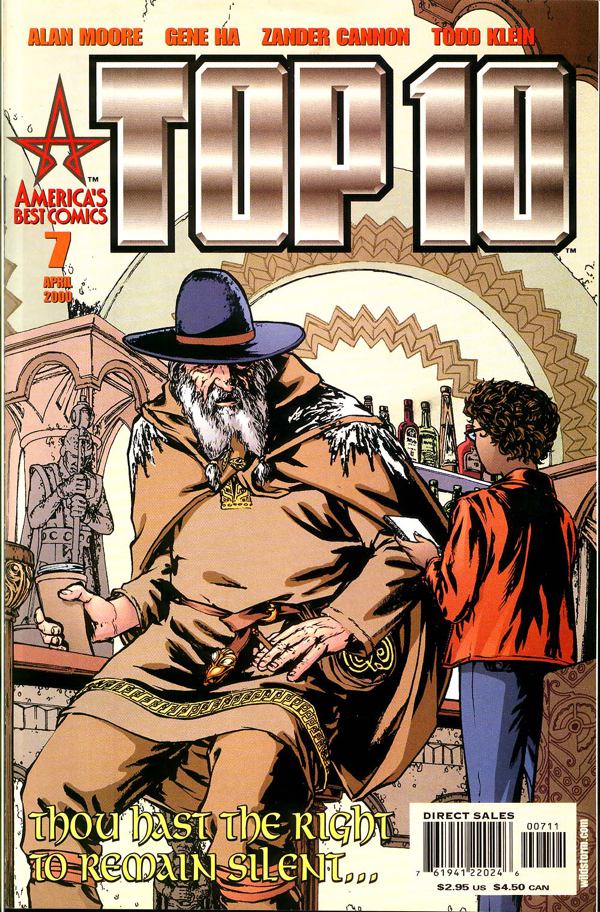 Moore doesn’t waste anytime getting to the cop side of this superhero/cop mashup. Within the first few issues there are serial killers, gangs, drugs, prostitution, interrogations, autopsies (done by a medical examiner that shrinks of course), and personal conflict in the precinct. It is all so dense, and comes at you so fast that each issue gives you bang for your buck. In fact, I wasn’t prepared for this, so instead of reading the entire first volume of the series, I only read the first arc for this entry. A lot of this is due to Moore’s writing, but the attention to detail in Gene Ha and Zander Cannon’s art didn’t  help.

Ha and Cannon work together to establish a gritty, street level tone to the story. This helps keep what could have ended up turning into a fanstatical superhero story grounded in reality as much as possible. When the cops are out at a murder scene, or in a back alley the art helps make it feel like you’re right there beside them. With that said, each superpowered character feels distinct, and larger than life. It’s this balance in both the art, and writing that makes this book what it is. One of the true highlights of the book are all the easter eggs, and shoutouts found around Neopolis. I’m not sure which of the creators were responsible for these, but they are all over the place. Examples from the first pages of the first issue include subway advertisements for the “Legion Of Superlawyers” and a “Dietary Supplement with extra adamantium.” Stuff like this are constantly in the background of any given scene. There’s a shoutout to Superman with a billboard for K Kola, “His Secret Weakness” and a crime scene that happens to be in front of a store called “Power Rings N’ Things.” These details just keep coming, and coming throughout the series. It’s quite amazing that Moore, Ha, and Cannon were able to come up with as many clever details as they did.

I know Watchmen was the holy grail for filmmakers for over twenty years, until Zack Snyder was able to make the film. I know that The League Of Extraordinary Gentleman seemed like a good idea with all those famous characters. I still feel that, given today’s circumstances, Top 10 is the most obvious of Moore stories to adapt to another medium. In fact, with the increase of superhero shows, and the familiarity of police shows it’s a wonder that someone hasn’t tried something similar for TV yet. I know that with what happen during the making of the movies featuring the afformentioned properties means we will probably never get another Moore adaptation. It’s a shame too, because Top 10 would make for a great show, and the book deserves the extra attention so many years later.

The series would only make for great TV, because it is a great comic book. If Watchmen is all you know of Alan Moore you should check out this series for a different taste of what the writer is capable of. If you *GASP* have never read Moore this may not be the work most remember him by, but it is a prime example of a master at work, and is well worth your time and attention.