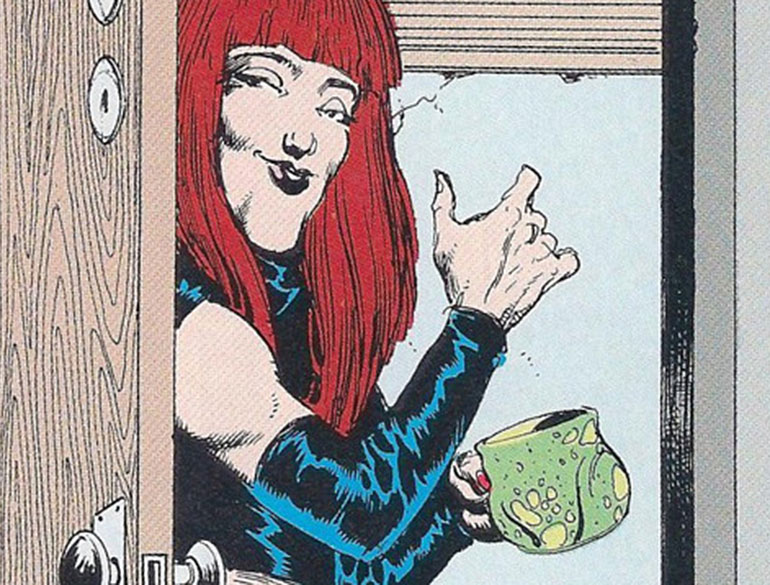 Like most people, I saw Infinity War shortly after it came out. Like most comic aficionados, I have read several think pieces dissecting its plot, philosophy, and possible resolution. One thing that struck me, something I haven’t read about as much as I thought I would, is that Thanos should not have been rewarded with the Soul Stone.

To explain why this affected me so much, I’d like to compare this plot point to one from a comic published more than twenty years ago in a series that is still hailed as progressive and groundbreaking.

A Game of You was the fifth volume of The Sandman series published by the Vertigo imprint of DC comics. Issue #35, “Beginning to See the Light,” written by Neil Gaiman with art by Shawn McManus, colors by Daniel Vozzo, and letters by Todd Klein, was first published in February 1992 and the whole story was collected the following year (and has remained in print ever since).

In this particular issue, Wanda, a transwoman, having been repeatedly misgendered by the witch Thessaly in the previous issue, has to listen to the reanimated, disembodied face of George explain why that happened. There’s a lot wrong with it. 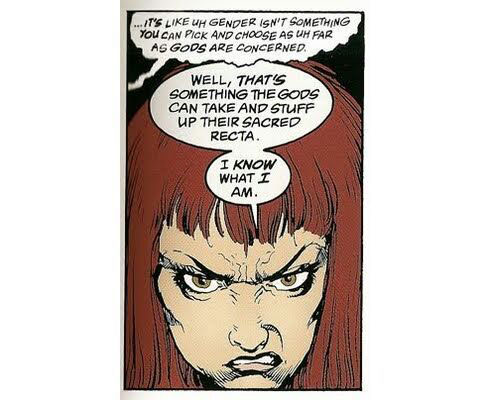 This isn’t a debate about the nature of transness or simply a conversation with a bigoted individual. This is a supernatural character telling a trans character that the universe itself — along with its sundry divine and cosmic beings and transcendent entities — does not recognize trans identity. This goes beyond mere philosophy or points of view.

Gaiman said in an interview for The Sandman Companion that he agrees with Wanda that transphobic views on gender are “something the gods can take and stuff up their sacred recta.” But Wanda is never vindicated, and eventually dies so that the other women in the story can live. Much has been written about what a terrible depiction of a transwoman Wanda represents, and it doesn’t matter what we’re supposed to agree with. A Game of You is a story that exhibits the opposite effects from Gaiman’s actual intentions. 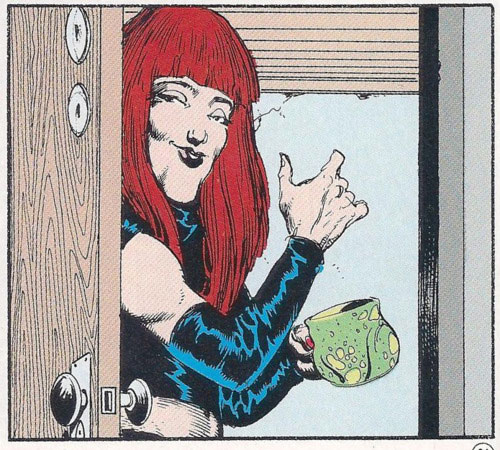 If he’d wanted to write about how “old gods” and ways of thinking need to be put away, that would be one thing, but that wasn’t what this story was about. In a comic book universe in which gods exist and cosmic beings that transcend morality come into play on a routine basis, trans identity should be affirmed beyond one line of dialogue. In a world where 47% of trans people are at risk of being victims of assault, that felt irresponsible, even then.

Which brings me to Infinity War. Thanos is told he has to sacrifice something he loves in order to obtain the Soul Stone, and with tears in his eyes as the music swells, he tosses Gamora off a cliff. Gamora’s last words are “This isn’t love.” But Thanos gets the Soul Stone, which means that, as far as the MCU is concerned, it is.

Throughout the history of Marvel Comics, the universe has been anthropomorphized as the character of Eternity. Infinity War gives us something of a surrogate Eternity in Red Skull, who acts as a guide for Thanos on Vormir, the planet that holds the Soul Stone. 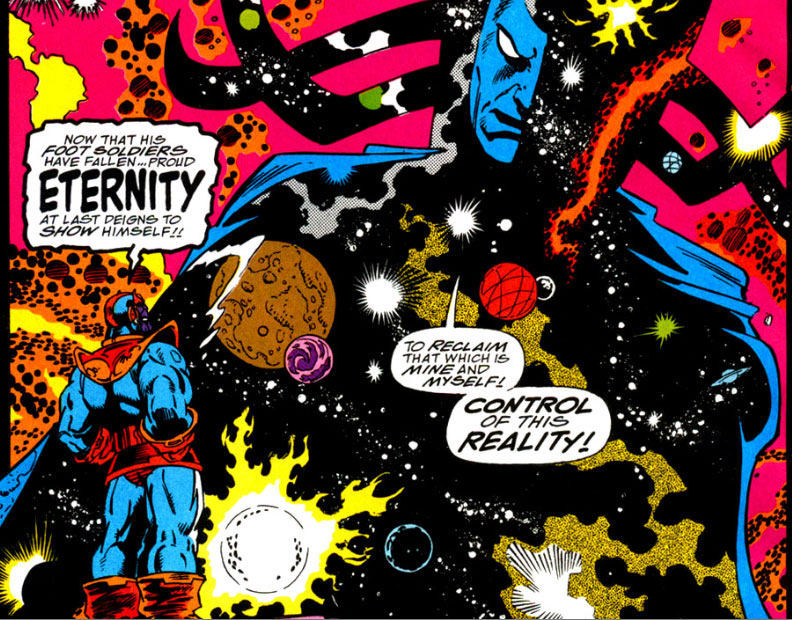 If the Red Skull had reappeared after Gamora’s murder and said, “She was right. You murdered your own daughter and are a fucking monster. You don’t get the Soul Stone,” and Thanos tore the place apart until he got it, that would have reaffirmed Gamora’s point of view. Instead, without the writers meaning to (hopefully), the universe itself weighs in on this philosophical counterpoint and sides with the murderer.

I can appreciate that directors Anthony and Joe Russo, working off a screenplay by Christopher Markus and Stephen McFeely, take it at face value that Thanos is pure evil. But we live in a world where people see nothing wrong with locking children in cages and making poverty a crime. Think pieces are being written about Thanos as “the ultimate utilitarian.” To inspire such thinking also feels irresponsible.

Thanos may be an unreliable narrator, but we get no indication of that. So, when he talks about Titan dying because of too many people depleting its resources or Gamora’s homeworld becoming a paradise in the wake of his slaughter, there’s no reason not to believe him. No one contradicts him or presents an alternative. Starfox doesn’t suddenly pop up to say Titan had died off because its richest citizens drained the resources and left it for dead. Nebula doesn’t interject about Gamora’s homeworld being paralyzed by the trauma of a campaign of death.

A passive viewer is left to think that Thanos is correct. 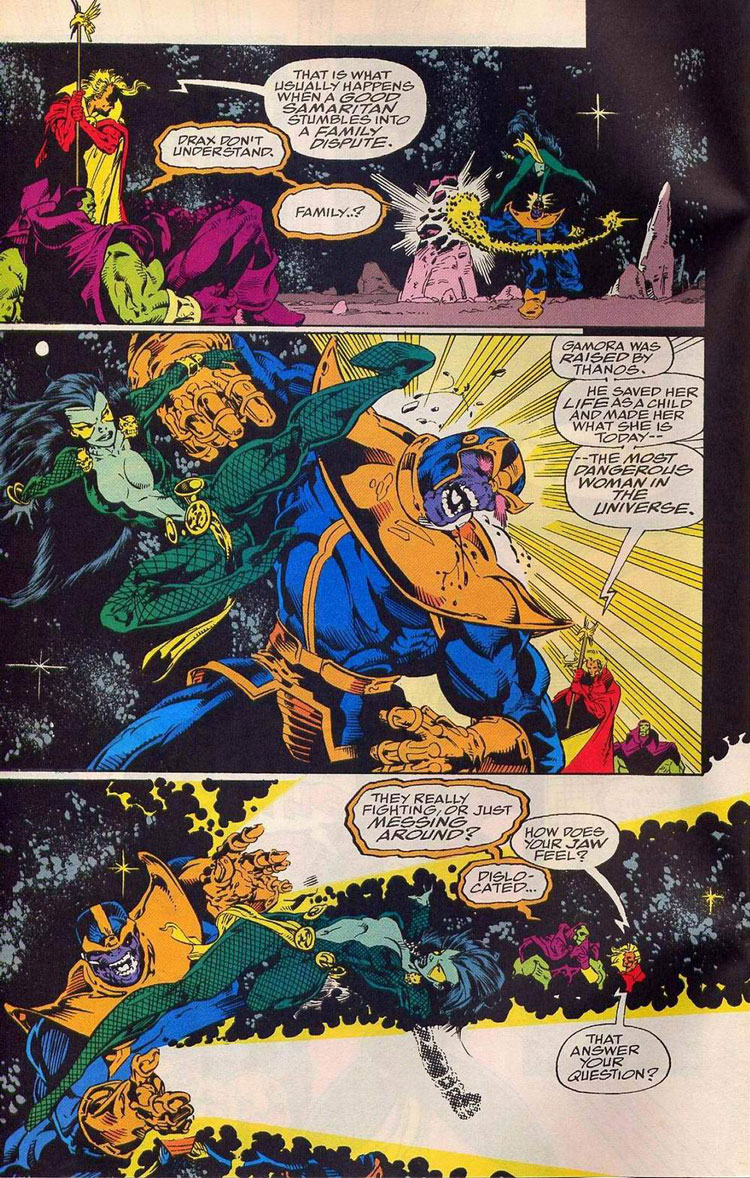 In this context, Thanos sacrificing someone else for his own gain should be contrasted or treated differently. Instead, he gets what he wants.

Gaiman may have written his seminal work several years ago, but the embrace of Thanos’s storyline in Infinity War shows how little has changed. Artists need to think about the larger or deeper implications of their work. When “incels” see women as disposable, it’s troubling to watch one being thrown off a cliff like a sack of garbage.

Transphobic rhetoric has only intensified against creators in recent years, and there has been no course correction from this decades-old pronouncement from one of the most heralded series of the medium. It’s technically still canon in the DC Universe.

New Sandman comics will start being published in August, with plots by Gaiman and others writing, and hopefully they can undo this egregious flaw. Meanwhile, Avengers 4 could easily render everything I’ve written here moot, which would make me very happy. 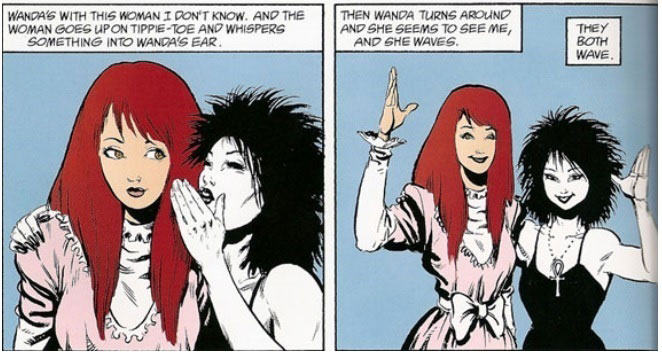