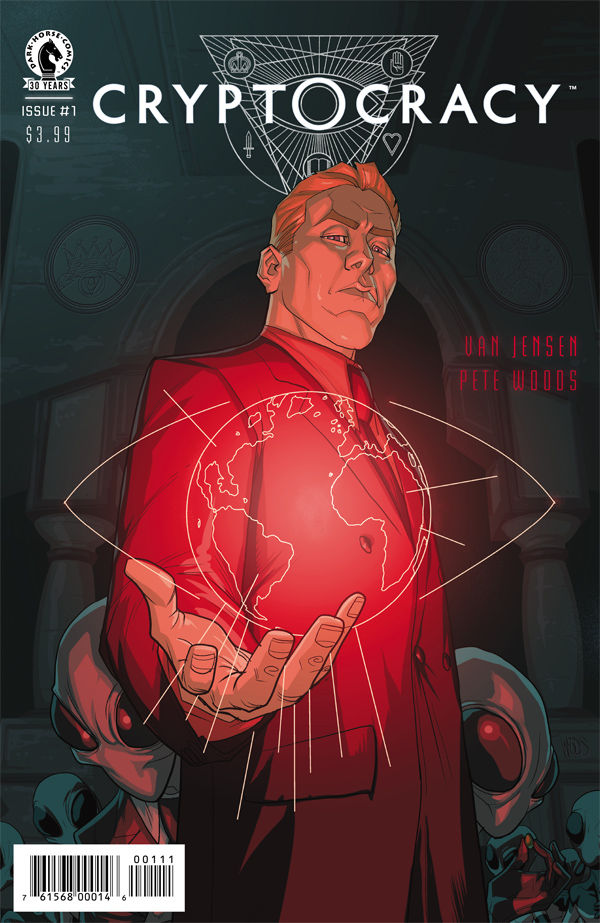 As someone who has done a lot of flying the last several years, I have to tell you, this is the most riveting story about the Denver International Airport you could ever hope to read.

Cryptocracy is a story about The Truth, in the vein of X-Files meets Lazarus. The Illuminati are themselves a front for what’s really going on, and what’s going on is a conspiracy to rule the world, its technology, and its resources that spans centuries. Political assassinations, Roswell, horrific catastrophes costing innocent lives – it all comes down to these people.

The story is a fun twist on a popular concept – the conspiracy theory is alive and well in fiction, from Fringe to the X-Files revival. Cryptocracy introduces us to the people who run the conspiracy, their bureaucracy, their goals, their weird genetic-spliced bear friends. The narrative has a lot of bounce and covers a lot of ground. Sometimes it covers too much – this issue is definitely a bit crowded for such a big concept. But, Van Jensen’s characters have a lot of personality, which particularly shines through with his dialogue. Fans of his character-driven run on Green Lantern Corps will find a lot to love here; Jensen knows how to put a bunch of weirdos in a crisis and get them bantering.

The plot twist of the issue comes a bit abruptly, but it lands thanks to Pete Woods’ stylish art. The colors are great too, very plush in the Family interiors and spooky where appropriate, though in places the layouts feel crowded – such as tracking the fight at the Tennessee Governor’s Mansion. This may be a symptom of the overall stuffed-to-the-gills nature of the issue. Woods really shines with the future tech, as well as the rich character designs. There’s a lived in look and feel to the set pieces, despite the fact that so many of them are full of insane futuristic stuff that doesn’t really exist (or does it…..)

It’s a challenge for a first issue of an independent book to build a world and introduce characters plus add a hook all in 20 some pages. This issue does it well, and the world built is very robust. It’s nice to see something so unique in tone and temperment on the stands; this story could easily have been very dour and dark, but thanks to the art and the dialogue, there’s quite a bit of life on each page, and more than a few laugh-out-loud moments. Hopefully in the coming issues, the story has a little more room to breath, with a little less exposition and a little more show not tell.