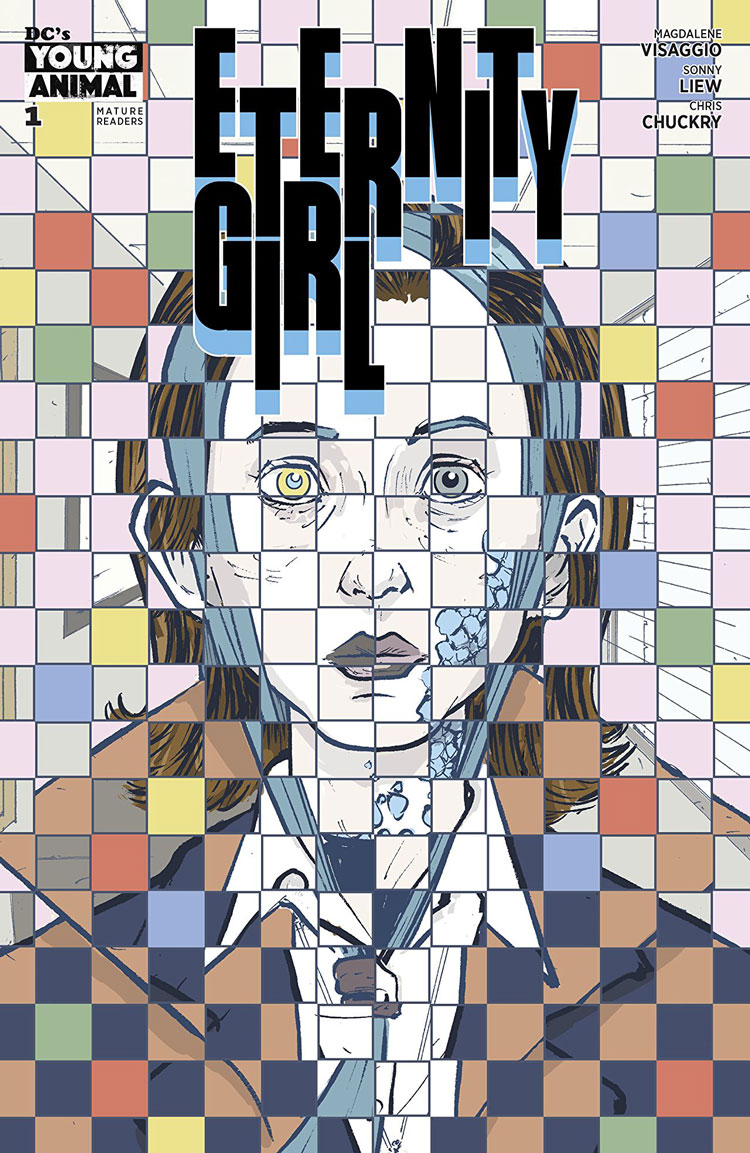 Caroline Sharp gave the better part of her life to being a super-powered secret agent — and now she wants to give the rest. But there’s a problem: technically she can’t die. Removed from service and spending her days depressed, in therapy, and trying lots of different ways to end her life, Caroline is about to get an offer of a lifetime from an old foe — to end her lifetime. And everyone else’s in the process.

Because super-heroes are generally designed to be either wish fulfillment fantasies or escape vehicles, the narratives we look for and are drawn to tend to be about winning. Winning the battle against evil. Winning the battle to be who you want to be as a person. Struggle, but ultimately understanding that struggle inevitably leads to winning.

And in many ways it’s refreshing. As someone who grew up with suicidal ideation integrated into his daily existence — and who as an adult has embraced therapy to deal with anxiety and depression — a hero like the one posed in Eternity Girl by writer Magdalene Visaggio and artist Sonny Liew is exactly the kind I need right now. And I’m pretty sure I’m not alone.

Visaggio has been delivering adventure stories for the better part of two years that have given readers — particularly young readers with trans identities — a place to go to see a glimpse of themselves. And those titles, Kim & Kim and Quantum Teens Are Go in particular, have been a delight to read and watch as Visaggio’s craft and voice have honed right before my eyes.

Eternity Girl significantly ups the ante in terms of Visaggio’s narrative prowess, and delivers a hero whose struggle is familiar, normalized, and not guaranteed to be winnable. The skill with which the writer portrays a character who is living with depression, who isn’t a caricature of the most extreme sufferers (who of course, do represent part of the spectrum of mental illness), is encouraging. Because there is something to the idea of the slog with which one moves through the world when depressed represents so much of the daily experience for so many. It certainly at times has for me.

And that those who experience suicidal thoughts and are burdened with the weight of depression are living their lives among us, knowingly or unknowingly by colleagues and strangers, is an important and often overlooked phenomenon. Both Visaggio and master artist Liew have captured that experience quite deftly in the pages of Eternity Girl’s first issue, setting a tone of banal daily life reinforced expertly by Chris Chuckry’s colors. As the palette varies from subdued to fantasmagorical when Liew introduces the more cosmic fantasy settings, I get a real feel for the rich expectations Caroline has for her ending — and the utter disappointment she has to carry in the moments where it’s completely out of her reach.

Even the hero’s design as executed by Liew is a haphazard collection of body parts, unwashed hair tied like a hatstring, and an overcoat two sizes too big to mask the person underneath. Liew hones in on Caroline’s worry lines and posture in both human and super-hero form, keeping a consistency of emotion from one shape to another.

And as Visaggio makes it clear that the human form, once natural to Caroline, is nearly impossible for her to emotionally express anymore, it opens up a world of thought into what it means to transition from one life to another. And still be struggling every day, even if that first person wasn’t who you were meant to be either.

My single regret with Eternity Girl is knowing that it is but six issues long. This character, this narrative, this creative team — all deserve a blank check for publication. Caroline Sharp is a unique, and yet deeply recognizable, protagonist, and Visaggio and Liew are delivering on a book that I could read over and over and still find new ideas that speak to the heart of my condition and existence.

Caroline Sharp may not be winning, but Eternity Girl sure is.