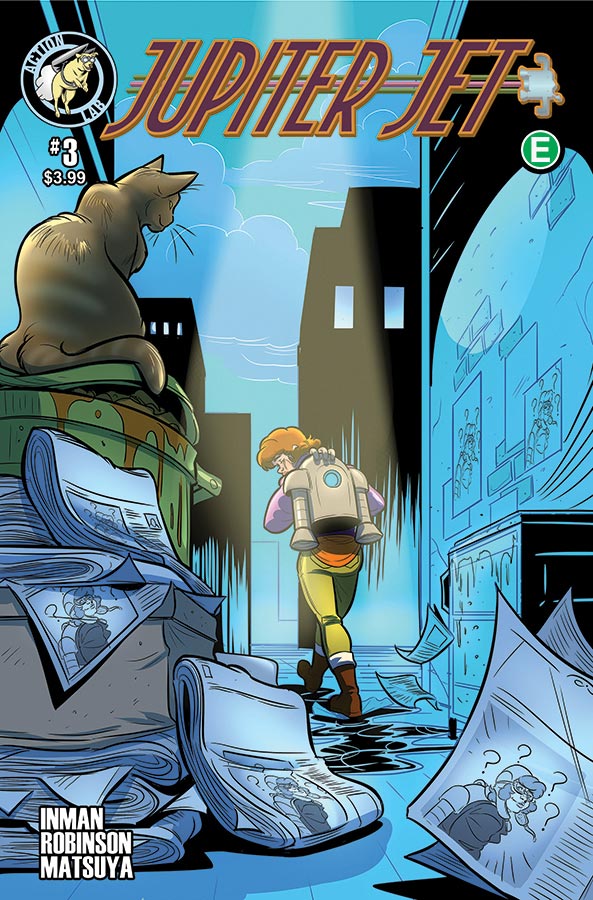 It’s time to tune in for another exciting review of the adventures of Jupiter Jet! Yes, Jupiter Jet #3 is out this week and it continues to raise the stakes for our heroine Jacky and excitement for the reader. Each issue has continually grown in adventure and fun and this one is no different. We continue to get a action-packed story as well more revelations tempered by the preponderance of questions. Waiting for each issue to come out is rewarding. It’s like being a kid again and racing home from school every day to catch the next episode of your favorite cartoon.

Ashley Victoria Robinson and Jason Inman, as teased by the cover, confront readers with the predicament that every champion faces in their hero’s journey. Will Jacky refuse the call to become the hero she is destined to be? It’s a classic problem that nearly every hero faces and most recognizable for comic book fans, (again as foreshadowed by the cover) is Peter Parker abandoning his Spider-Man identity. Author Joseph Campbell likens this refusal to remaining in the mother’s womb when it is time to be born. By not taking these next steps the hero is unable to grow and become what they are truly meant to be. Robinson and Inman handle this nicely in this issue as they mold young Jacky into a hero. It shows that they have done their research and applied all their experience in story telling into Jupiter Jet. It’s really what a classic story should be. This issue also introduces a few new cool players into the mix that fit perfectly in this period and story. One of these characters may possibly be a role model for Jacky at some point in the future. This issue also continues to trickle out more information as to the origin and nature of the power source and the man that wants to control them, Praetor Pluto. Jupiter Jet just continues to be a wholesome booster shot of fun, excitement and gumption as it steadily builds the world and characters. As with previous issues the back story continues the tale of Jacky’s parents creating the jet pack. It too is building up the excitement and stakes as her parents come face to face with some true dangers.

Ben Matsuya again provides the perfect look and feel for the world of Jupiter Jet. Matsuya is so good at creating the characters in this world. Everyone has their own look and feel that is totally different from each other. It makes them easily memorable if they pop again in a future issue.  There are a ton of emotion on display in this issue and Matsuya again excels at bringing those feelings to life. There is a nice variety in panel layouts in this issue that are used perfectly to tell the story and not just to look cool. Full page panels give scenes weight to them while 9 panel layouts give the story space to come alive sequentially. Jorge Corona continues his work on the back story giving the parent’s adventures a whole different feel to it.  While the story still has the same designs as the main the line work gives it a old-timey touch to it. Mara Jade Carpenter is a wonderful colorist and brings her talents to this issue. The bright colors firmly place the story in the golden age of comics while still giving it the modern touch of depth and dimension. She does lovely work on glowing light sources throughout the story which adds a warmth to the mood of those scenes. Taylor Esposito gives the characters their voices with his lettering for the issue. As is typical of a Jupiter Jet story there are plenty of sound effects for Esposito to render with a fun comic book passion. His inclusion and successful styling of these effects always add the sense of sound to an otherwise silent page.

Jupiter Jet #3 is the obvious next step for Jacky’s journey as she grows into her destiny. The excitement continues to build on the events of the previous issue as well as adding to a cast of delightful characters. It really is not easy creating and building a story of this caliber, but Inman, Robinson, Matsuya, Carpenter, and Esposito prove that with great talent come great storytelling.