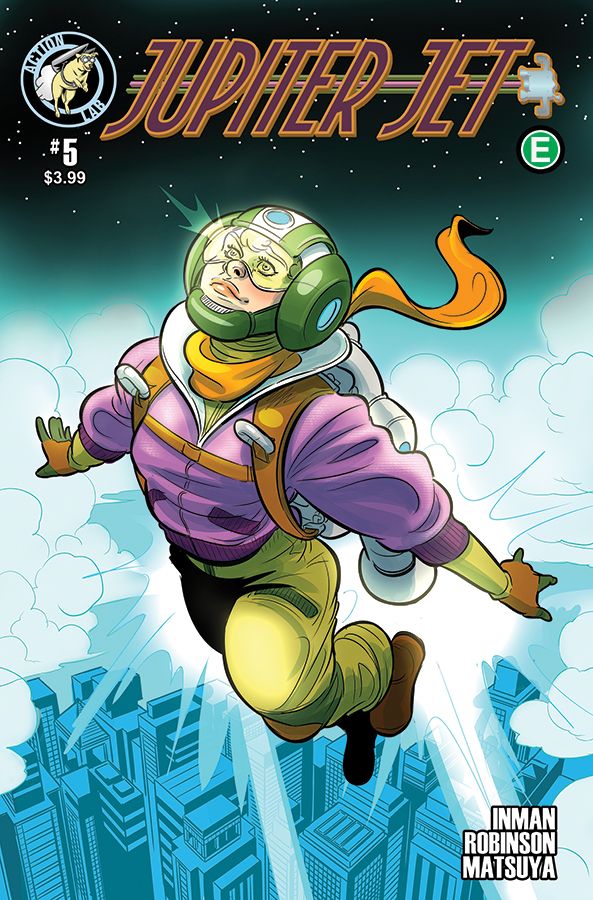 “Up, up, and away!” With a shout Jupiter Jet soars to new heights in the final issue of the first volume of what is sure to be many. Jupiter Jet #5 wraps up the first arc of Jacky’s heroic journey by answering some key question. However, what lies behind those questions are truths that neither Jacky nor the reader will be expecting.

Ashley Victoria Robinson and Jason Inman have translated the adventure of writing their first hero origin story from the ground up into the pages of their character’s own journey. From the beginning they have successfully delivered action, adventure and intrigue while promising bigger things to come. In issue five the reader will find the fulfillment of that promise, and it looks to be just the beginning of a truly unique adventure. The creative team have taken the model of a classic golden age hero and super charged it without losing the class and beauty of times past. This final issue brings Jacky face to face with her enemy in a struggle that shows how much she has grown, both as a person and a hero. Staying true to the books format there is plenty of fun repartee and action but also closes out with good dose of sci-fi that rings true to books of the golden age. Robinson and Inman have done such a great job of taking the reader along with Jacky to this point. They have also surprised both this reviewer and will absolutely surprise the reader with a major revelation. Though they have been promising this surprise since the beginning it was no less eye-widening when it actually happened had we not been aware something was coming. It will be interesting to see how Jacky handles the revelation in the next story arc.

Ben Matsuya continues to deliver characters with such expressive visages that it seems the reader is almost watching an animated series. With Jacky now having a much better working jet pack this issue takes the story to a variety of different locales and Matsuya gets to flex his talents past drawing city-scapes. The artwork for the entire issue is really a treat since so much action and special effects take place closing out the story arc with a bang. Mara Jayne Carpenter brings the pages to life with her solid coloring skills. As mentioned before there are a variety of new places and things to illustrate this issue and Carpenter complements Matsuya masterfully. Jupiter Jet is another great example of a creative team working in sync to bring to life a vibrant world. Taylor Esposito is a key part of that team as he provides clarity and emotion to the characters voices. There are a ton of sound effects that Esposito gives a fun explosion of visual sound to.  This issue also includes another back up story that concludes the origin story of the jet pack and catches the reader up almost to the first issue. Jorge Corona continues providing the artwork for this short, giving it a different yet similar tone to the main story. Although, only two pages there are some beautifully drawn moments that bring an emotional close to these first chapter.

This series has been such a thrill ride from start to finish. It is the obvious work of people that love comic books and the all the stories that have come before them. Jupiter Jet is a glowing example of what comic book story telling can be when done with care and talent. Though this first chapter of Jacky’s story is over reader’s will be left anxiously waiting to see what happens next. The entire creative team deserves a standing ovation for Jupiter Jet!