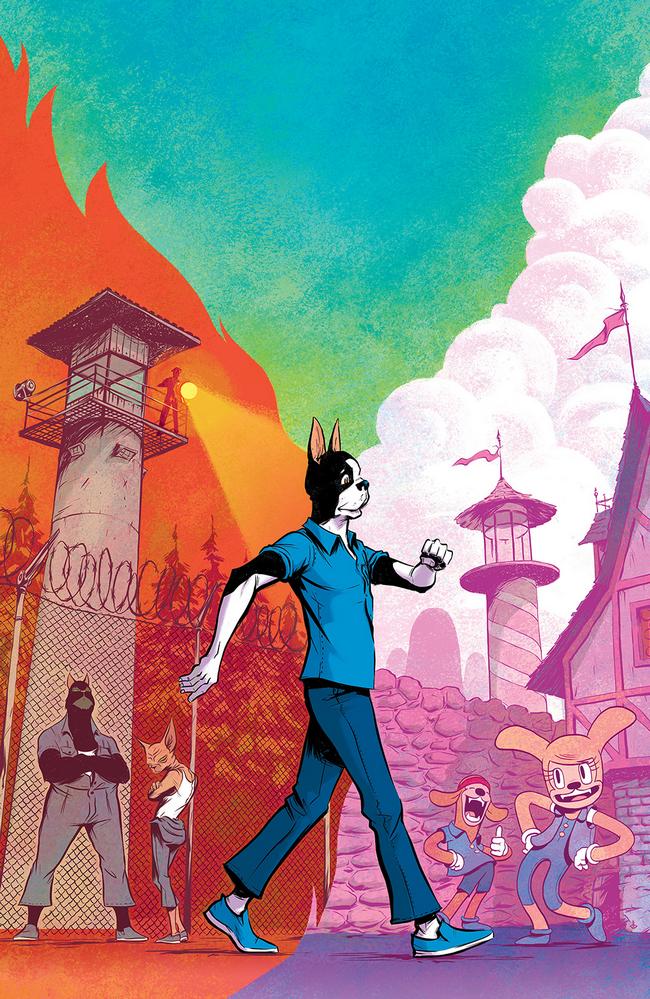 I’m sitting on my couch with my wonderful little black cat, and I’ve just finished another read through of Kennel Block Blues, a brand new series from D4VE creator and scribe, Ryan Ferrier with art by Daniel Bayliss. I’m looking over at my sweet little cat, and after reading this book, I cannot stop thinking about how he would fare in pet prison. Would he be a gang leader? Or one of the strange, slightly off-kilter, loners? This is not the first time that comics have made me ponder things I previously though unponderable, but this first issue of the strange, quirky, and fun Kennel Block Blues has certainly provided an armload of entertainment.

Kennel Block Blues follows Oliver, a charming and constantly happy dog who has been sent to prison with some of the toughest (and still sweetest) animals on the block. He’s not sure why he’s there, fairly certain it’s a mistake, yet he does his best to navigate the unfamiliar and hardened pet prison terrain. He befriends a handful of oddball animals and attempts to keep his spirits up by singing about his time in the joint, much to the chagrin of his prison-mates. By the end of the issue, Oliver has stumbled his way through pet prison politics, and his facade seems to falter as he realizes just how much trouble he’s in.

Ryan Ferrier has concocted perhaps one of the strangest conceits to a comic I’ve seen in some time. And comics are…well, comics are weird. However, this is far from a bad thing. If someone were to describe the premise of this story to me, I’m fairly certain I’d side-eye the crap out of them, but reading this first issue was nothing short of enjoyable. The comic is upbeat and cartoony, certainly a far cry from his foul-mouthed and fart-joke filled exploit, D4VE, yet his writing is still incredibly strong. Ferrier has a superb sense of dialogue and rapid fire conversation, and many of the things that I loved about D4VE translate surprisingly well to this context. Ferrier has created a vast cast of interesting characters, imbued with easily recognizable personality with plenty of room for layers. Additionally, he has managed to tackle the serious subject of kennels, shelters, and putting animals to sleep when they either get in trouble or are discarded by their owners, and placed the subject square in a setting that is thought-provoking without overdoing it. It sheds light on the sad state of the animal/pet control system, and has the potential to bring new minds to the subject with his entertaining take on the state of affairs. This balance is not easy to strike, but it’s certainly been accomplished here.

Daniel Bayliss does a fantastic job of bringing life and originality to the characters in this story. Every single animal is unique and intricately detailed, adding to the layered effect of Ferrier’s writing. The settings are beautifully illustrated. I particularly love the juxtaposition between the highly-stylized cartoon versions of the animals and the hardened, more realistic versions. It really served the story well in differentiating between Oliver’s view of shelter and the dark reality of it all. Bayliss should also be applauded for his ability to capture the earnest dog expressions that he does. Emotion is easy to read and tugs at the heart strings, much like actual sad puppy eyes. Metcalfe’s colors are gorgeous in this book. Every shade renders the prison a little darker and grittier, yet the cartoon colors are bright and beautiful. Finally, I’d like to call attention to Bell’s lettering. This is a book where lettering is of utmost importance, particularly in the scenes where Oliver is singing. The text is highly-detailed, varying in size and color, and the end result is really something in this first issue. Everything about the art flows together really well to juxtapose the goofier cartoon parts with what’s actually going on.

Kennel Block Blues #1 is a delight to read and provides a really fresh take on the “prison” subject matter. This issue sheds light on some of the sadder parts of domestic animal life, but keeps the story moving as well. The characters have a lot of charm, and I’m looking forward to seeing where it goes next. Kennel Block Blues hits the right notes with a compelling story and beautiful art. Way to go, team!