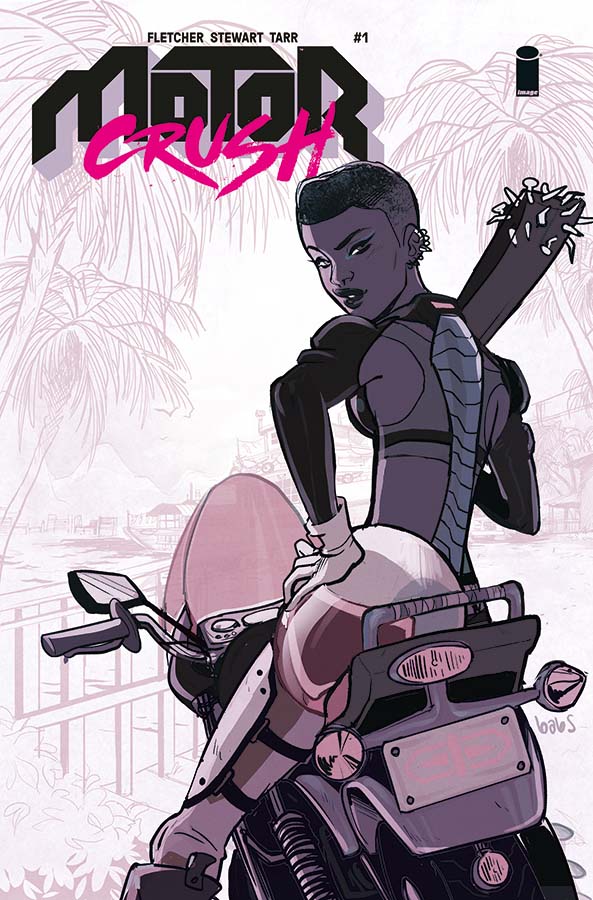 Ladies, gentlemen, and non binary folks start your engines, the most hotly anticipated title of the year is finally here and it’s everything you wanted it to be.

The reunited Team Batgirl (Babs Tarr, Brenden Fletcher, and Cameron Stewart) plunge us deep into the literally high octane world of Domino Swift, an up and coming champion in both the glamorous pro circuit and gritty illegal counterpart of Nova Honda’s burgeoning motorcycle culture. For long time fans of Tarr’s work, Motor Crush feels like the fulfillment of a long unspoken promise, given that she shot into recognition with her series of Sailor Moon bosozoku illustrations. The unspoken implication of the series’ overall look and feel is that the trio organized themselves around Tarr’s aesthetic and built up the story from there, and if that is indeed the case, it pays dividends immediately.

From the beach-side sunset that opens the issue to the Steven Universe reminiscent pastel gradients and fashion choices, Motor Crush is infused with Tarr’s creative influences and idiosyncrasies. They’re all familiar elements from her time on Batgirl, but there’s a palpable sense of Tarr being completely unbound by the restrictions of working on such a tightly controlled franchise. One of the clearest, and most fun manifestations of it so far is Domino’s friend and co-racer Sonoya, whose look is a Tarrified version of Dragon Ball’s Bulma, the kind of impulse that found itself sublimated into the background cameos that dotted her crowd shots on Batgirl. On Motor Crush, Tarr seems to be able to roam wherever she likes, and she does so gleefully.

The division of art duties between Tarr and Cameron Stewart remains blessedly unclear, but the figurative work is clearly being driven by Tarr for the time being, and Stewart’s presence is more subtly, but no less clearly, evident in the layouts and composition which could very easily become one of the main draws of the title. Where Stewart’s keen design sense is already coming to the forefront is in the race sequences, doing the obvious like cutting up the page in sharp slices to communicate movement and energy while doing the subtler and almost subliminal work of using the angles and shapes to move the eye across the page and communicate tension through the narrowing of available space. Working in tandem with the library of cinematic language that Tarr employs in placing the subjects in the frame, the net result is an urgent tour de force in which all of the elements; figures, layout, and colors are arrayed towards the same specific goal. Colors ease back into washy pastel gradients in looser, wider shots, and tighten into deeply rendered, saturated hues as the action tightens the space and pace.

How the Motor Crush team uses the page may not seem like the most critical element of the equation yet, but Stewart is arriving fresh from Fight Club 2 and Fletcher from Black Canary, which boasted the most visually ambitious and striking compositions of 2015. Adding a surging Babs Tarr into the mix with Fletcher coming off his work with Annie Wu, Pia Guerra, and Sandy Jarrell is exciting enough without considering Stewart literally breaking the page with Chuck Palahniuk and Dave Stewart in one notorious example.

One of the most unique and exciting things about seeing the trio work in a space of their own is that their unique gender agnosticism comes out in full force now that they’re away from a title that brings a boatload of gendered assumptions along for the ride before the cover is even cracked. The gender dynamics are exquisitely wrapped up in Domino Swift herself. Her initial outward appearance is sleek and androgynous, geared towards the aerodynamics of racing, but a closer look reveals a carefully considered and very deliberate femininity. Even in her most formal race gear, she accents her look with slashes of red and black eyeliner topped off by electric nails, the one touch that remains visible while she’s on the bike. On the underground circuit, her preference for a sleek, aggressive femininity comes out a lot more prominently in a structured net top.

With the industry zeitgeist polarizing gender in comics to an extreme degree, Motor Crush stands out remarkably by subtly questioning how stories are gendered through the artwork while staying largely silent on the topic textually. It’s more or less implicit that Domino is a female racer in a male dominated field and that she’s a female protagonist in what would otherwise be a boy’s adventure story, but there isn’t the kind of attention drawn to it as Jane Foster’s stint as Thor or Chelsea Cain’s superpowers as a metaphor for male privilege in Mockingbird. None of this is even a significant departure from their outlook on the genres and ideas they played with on Batgirl, but the context of the title as the female spinoff of a male hero amplified the female coded elements and subdued the masculine ones in a way that denied them the deeper consideration afforded to Motor Crush.

Surprisingly, out of all of the (anime) influences that the trio have played with in their time together, it’s Akira that stands out the most prominently in Motor Crush’s debut. The motorcycles and how Tarr and Stewart use the trails of the tail lights to convey movement and speed in an homage to the film are the most obvious ways that manifests, but it also appears in more insidious and intriguing ways. The context of the story involves a kind of addiction narrative that takes on an utterly unique character as the addiction is initially attributed to the human rider, but is used by the motorcycle rather than the rider. When it’s introduced to us via Domino’s narration, she intertwines man and machine in her description that draw eerie parallels to Tetsuo’s bio mechanization in the climax of the film, but may be more pertinent to the unrelated Tetsuo: The Iron Man for its Cronenberg-adjacent exploration of post humanist body horror and fetishism. Either way, there’s a surprisingly gruesome undercurrent to Motor Crush that will be occupying a great deal of chatter and speculation, likely for several issues to come.

Motor Crush is, simply put, the debut of the year and the comic that will set the pace for what’s possible in 2017.