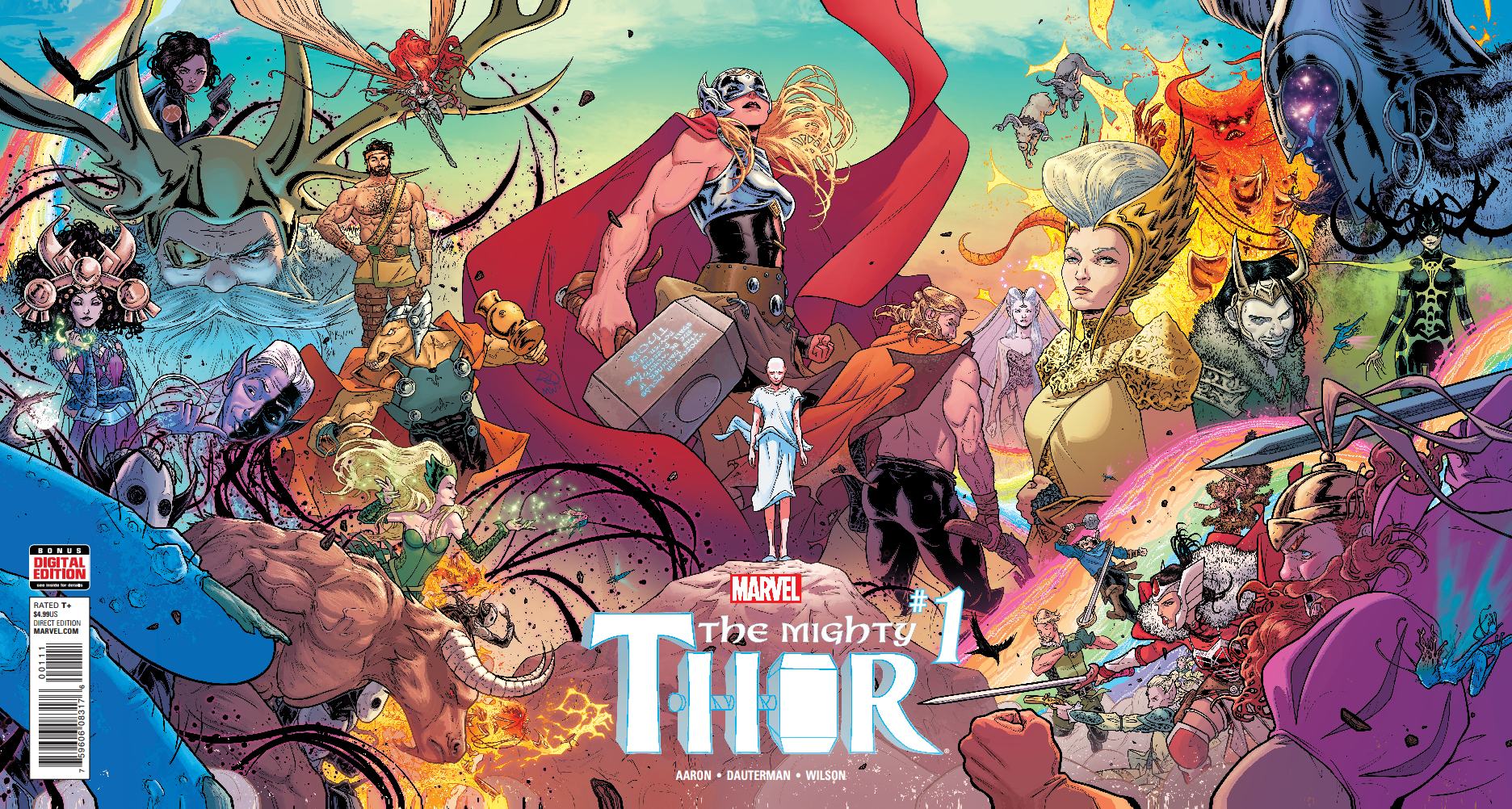 Thor returns with her hammer to crack some heads and smash our hearts as Jane’s ongoing battle with cancer is at odds with her new “career” as the Goddess of Thunder. Aaron balances her frailty and battle with the awful disease very well with the political situation of the other side to her coin, ambassador of Midgard and hammer wielding hero. There’s a lot going on for Jane in this issue and it feels like it explains her situation well for any new readers jumping in. It is very much a continuation of the last volume of Thor, but any new readers aren’t abandoned to just figure everything out. Aaron walks the tightrope of new & old reader friendly script nicely while giving a full rundown of what Jane is going through. It really hasn’t been that long since we found out who this new Thor is and there has been very little exploration about how wielding the hammer has affected her health. This first issue of The Mighty Thor lays all that out for readers and I was astounded at how many conflicting emotions this comic made me feel.

Aaron’s well written script and Dauterman & Wilson’s fabulous art had me all at once pumped and stoked for the Thunder Goddess to lay the hammer down on some baddies and quietly contemplative about what Jane is going through. To say cancer is an awful disease is a ridiculous understatement but these creators explore it’s effects in such a way with Jane that it is heartbreaking with every single page she appears on without making her character weak. The Mighty Thor #1 is the kind of comic that highlights just how, even within all the madness and Elves and Jotuns, the medium can connect with people and deliver a message about the human condition. These skilled creators do just that in this comic. This is about Thor, Jane, Asgard, Odin and all those wild things, but there’s a bigger topic at play that exists in every panel and on every page and is a compelling dynamic not found anywhere else in superhero comics today. While Jane is ill she is not weak and this team is doing a great job of showing why she is the most worthy hammer wielder there has ever been in the Marvel U.

Russell Dauterman’s artwork has never been better than it is in this issue, and that’s saying something. He’s really settled into an amazing spot with this character and his linework is flawless in this comic. He captures the frailty of Jane while showing her strength and determination and when she grasps the hammer the jubilation in the character is palpable. By Dauterman’s hand this is the most likable Thor has ever been and his skill with the emotional moments of this comic really impressed me. He handles the wildness of Asgard very well but the depth with which he pencils Jane in her mortal form was striking. She commands any page she appears on, hammer or not, and that is all through Dauterman’s pencils. Wilson’s colour work gives the comic another layer of depth as his work enriches the pencils and really takes them to the next level. There is an energy that comes from these colours, especially where Asgard is involved, that is almost tangible and Wilson is really a dream tag team partner for Dauterman’s style.

The Mighty Thor #1 is just that, mighty. Aaron, Dauterman and Wilson have me fully engrossed in Jane’s tale and I can’t wait to read more. This is a thunderous return for one of the best comics being published and I heartily recommend you try out this comic.