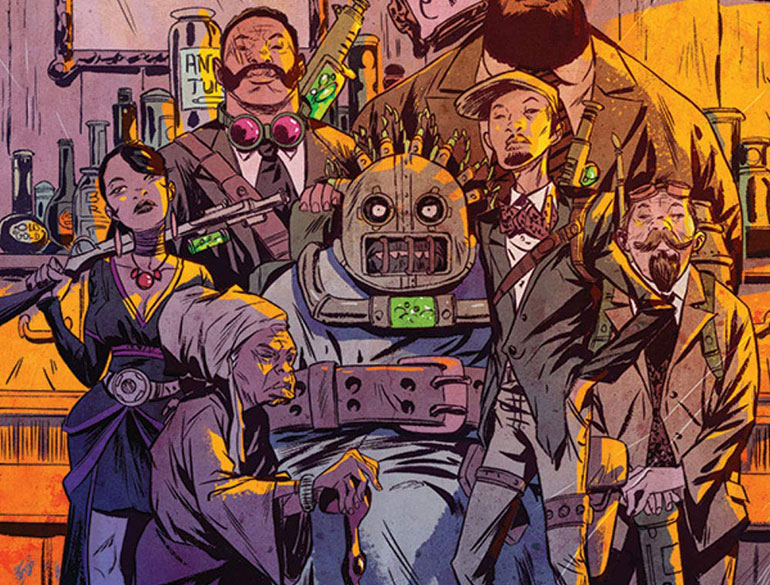 To say that David Walker is a creative super-force of nature would be an understatement. Prodigious author of award-winning comics. Author of widely acclaimed YA and adult fiction. Writer of incisive pop cultural criticism and journalistic scholarship. Maker of documentary films. Passionate and dedicated professor across all the storytelling arts at Portland State University.

It’s not an understatement to say that David is the da Vinci of our times.

We see this prodigious talent in play with David’s writing for comics. In my Latinx Superheroes in Mainstream Comics I serve up the concept: the storifying of geometry. The concept aimed to capture how carefully chosen alphabetic elements (narrative voice, dialogue, thoughts, and the like) can and do dynamize the visuals; those not so carefully chosen can overburden the geometric shaping elements by creating staid and stagnant storytelling redundancies. 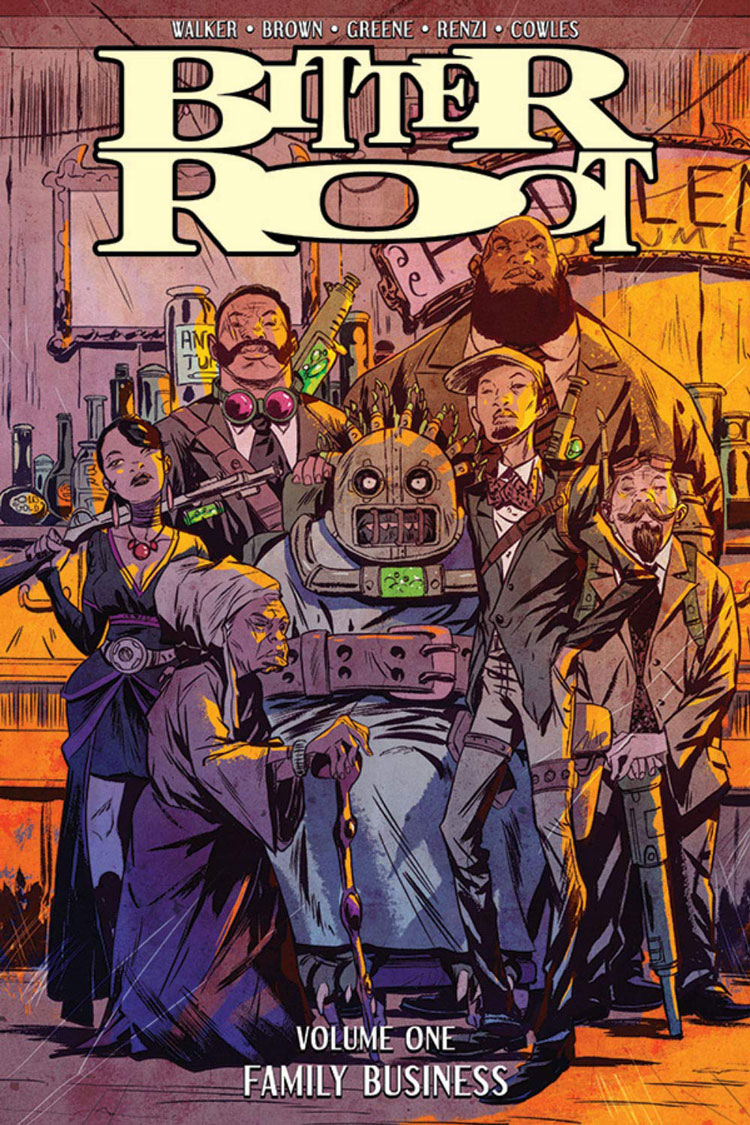 Great comic book writing guides the reader’s imagination in ways that amplify the visuals. In a way, great comic book writing is like poetry — or perhaps even more accurately, flash fiction. I think readily of one-liner stories such as Augusto Monterroso’s “When he awoke, the dinosaur was still there”) and Hemingway’s alleged “For sale: baby shoes, never worn.” In their careful concision, they guide us to worldbuild in ways that extend far beyond the words written on the page.

This is David’s writing, dynamically adding to the visuals as they collectively guide the readers’ imagination into ample and agile new spaces

Concise. Evocative. Smart. Exquisitely artful. David elevates content and form wherever he chooses to set down his words. In his poesies or creation he allows us to make new ourselves as the capaciously imaginative and transformative beings that we are.

I had the great pleasure of talking with David about a 2-page spread from Bitter Root while at BCAF: Black and Brown Comix Arts Festival in San Francisco early in 2020.

Frederick Luis Aldama:  David, you have been the writer on many different co-creative teams for DC, Marvel, BOOM!, Lion Forge, among others. Can you walk me through your creative process on the two-page spread (pages 2-3) of Bitter Root, Vol. 1: Family Business? How do you move from script to the words that we read in the printed comic page?

David Walker:  For me, the words I write aren’t that precious. The art of writing comics is the art of elimination. The elimination of words is crucial.  The vast majority of what I write in the script will be translated into visual images. Once the visual images of a page or pages are sketched, I think about the following:  How did the artists interpret my words? Do we need these visuals? Do we need these words? 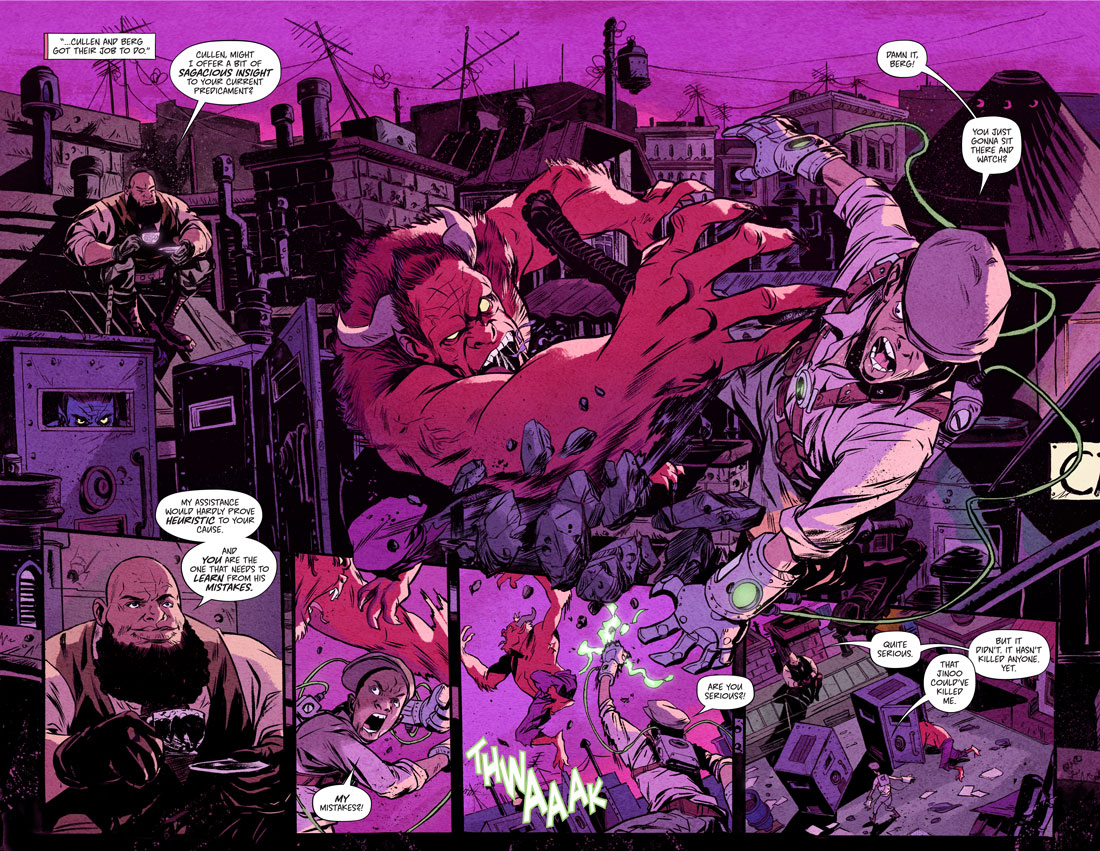 What I love about the 2-page spread here in Bitter Root is that it demonstrates not only what the story is about in general—the chaos and the energy of it—but it introduces several of the main characters: Cullen and Berg. You’ve got Berg sitting there very calmly, speaking with big words. And, you’ve got Cullen who’s clearly out of his element.  There’s this crazed monster that’s thrown into the mix.

The spread tells you everything you need to know about the characters, the story, the world that we fill. All this happens as a result of the process of elimination. As the art began to come through, the first thing I started thinking about was: what words can I eliminate? How much of this text can I get rid of? And, how does the placement of the words guide the reader’s eyes the way I want?

FLA: Writing for comics is a lot like writing poetry in the sense that there’s a radical stripping down to the most essential words and in the creating of say line breaks with the text box and word balloons to infuse energy into the narrative.

DW: Poetry sounds too artistic to me. [laughs]  I think of it more as a relay race. The script is the baton. I start running. I hand the script to the artist. The artist starts running. They hand it to the colorist and etc. And, each of us runs with a completely different style. We share the same goal: to get to the end and produce a comic that the reader really appreciates and absorbs.

When I look at the visuals of a page in any comic that I’ve worked on, I know that I wrote that page. Even though I didn’t draw the images, I can see how my script informed the visuals. Writing for comic books is laying its foundation to build something bigger.

FLA: What was the relay race for you and the large creative team working on Bitter Root?

Sanford and I worked together as work-for-hire for Marvel on Power Man & Iron Fist. I know how Sanford likes to do his layouts and how he likes his scripts written. Chuck knows this as well.  So Chuck and I try to cater to Sanford. For instance, I know that I need to do more than put lots of links to images. I need to embed images in the script to get the period of the comic right: the cars, clothing, buildings etc. For instance, if the scene takes place in St. Nicholas Park in Harlem, and it’s 1924 then I need to find some images of what St. Nicholas Park in Harlem looks like in 1924.  This is part of my job as a writer. 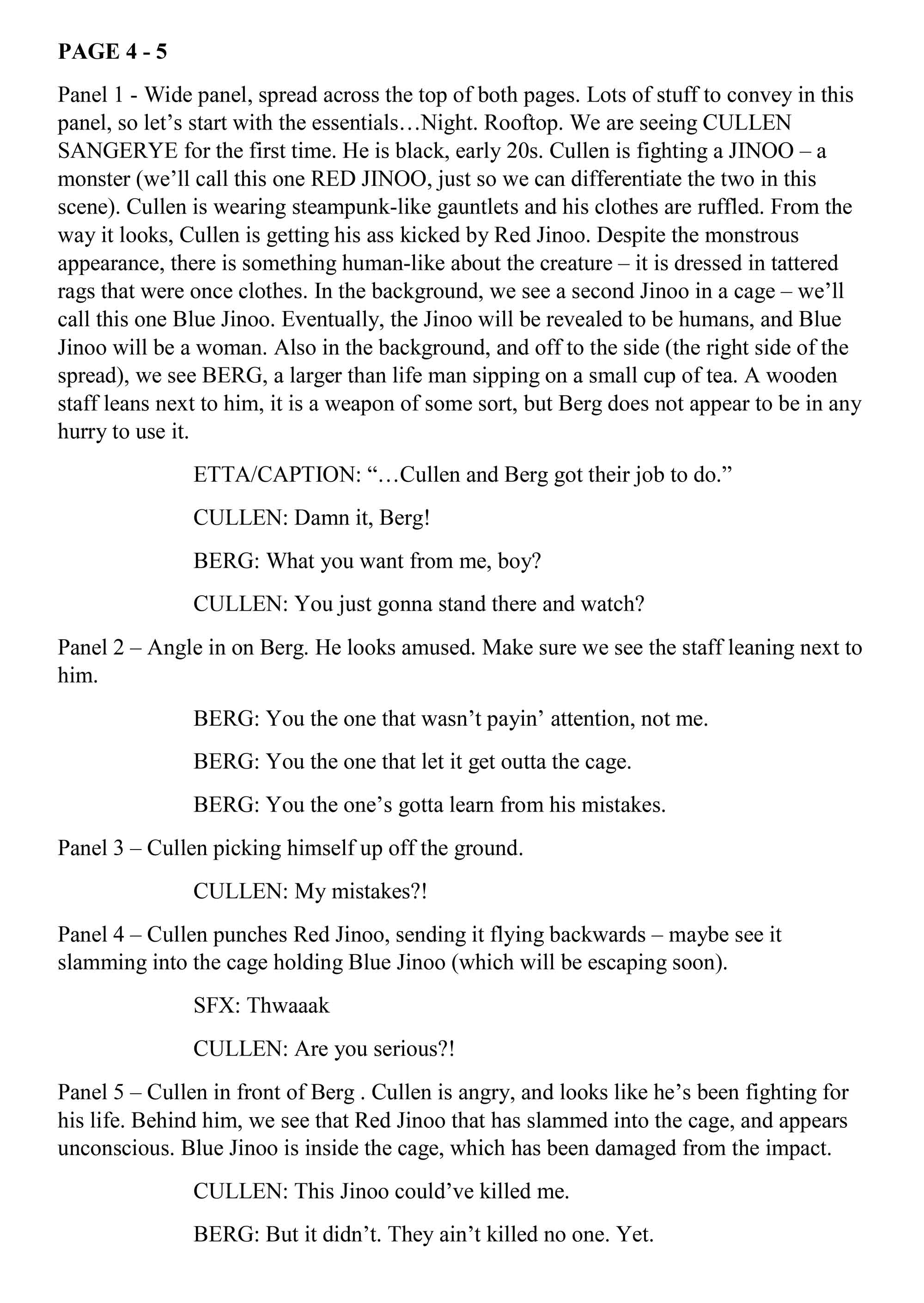 FLA: With this 2-page spread where the action unfolds mostly on the top of buildings, was there a match between the images of the period and Sanford’s visual rendering?

DW: This particular spread really does match.  I’m really happy with it.  Even when it doesn’t match, most of the time I’m able to figure out how Sanford interpreted the script to visually convey the period.

Being a comic book writer is about flexibility. It’s about being organic in the process and being open to interpretation.  As much as my ego may get in the way of everything I do in my life, I don’t let it interfere in the making of comics. A comic book writer should never let the ego get in the way of creating the best comic possible.  Unless you’re doing it all — writing, drawing, lettering, inking — then you have to know how to be part of a team.

FLA: Making great multi-creator comics is all about teamwork. I’ve read great comics in terms of visuals and writing, but the lettering sinks the comic.

DW: I know how to letter.  I’ve done it before.  I know how much work is involved. So, I don’t ask for something unless it’s crucial. The only notes I will give a letterer would be if I there’s a placement problem; if my eye is directed to the page in a way that it shouldn’t; or if the lettering is covering something that I think is crucial.

That said, there have been times when at first glance I think it’s a lettering placement problem but then realize after looking at it more that I don’t need all this text.  I realize that a majority of the story is being conveyed through the art. So, I cut out text from the page.  While some writers add more text, I’m all about letting the art tell the story. When the artist does their job well, my job is to get out of the way of the reader’s experience.

FLA: From start to finish, how many multi-creator team hours does a two-page spread take like the one seen here from Bitter Root?

DW: I can’t tell you specifically how long this scene took me and Chuck to write. Maybe a half-hour or so. Sanford probably spent two to three days drawing the spread.  It takes about 3 seconds to write the word “human being.” It takes 5 to 10 minutes to draw a human being.

When I teach writing for comics, I remind the students that everything is a shape.  How you can draw a human being in 24 shapes: squares, circles, triangles. I have the students do this particular exercise to teach them that what takes a few seconds to write could take an artist hours or days to draw.  As a comic book writer, you need to be aware of that.

That’s why I don’t write Alan Moore-like scripts, where it’s like three pages of text to describe one panel.  In this 2-page spread from Bitter Root that we’ve been talking about, the script is simple: Berg sits in the upper left corner and a monster swatting Cullen.  That’s all you need. If the artist wants more, then you can give it to them.