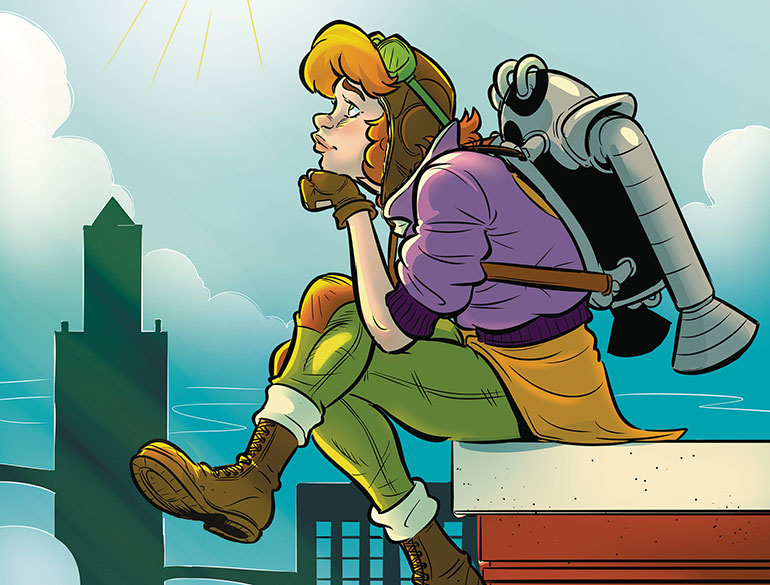 You will believe a girl can fly!

Jupiter Jet, the new comic book series from the husband and wife team of Ashley Victoria Robinson and Jason Inman is making believers out of readers with the adventures of Jacky and her amazing jet pack. Being the comic book experts that they are, they have made sure to add in layers of meaning beyond just what readers might pick up on first glance. Inman has given Comicosity a chance to peek inside their minds and find out more about what lays in the pages of the latest issue.

Chris Campbell: There have been a few mentions to the mysterious energy source for the jet pack and now the ray gun. We have learned from the back stories that Jacky’s dad used the energy for the jet pack but we still haven’t learned exactly what they are or how they work. It seems sometimes things work and sometimes they don’t as seen on Page 4 when she tries to use the ray gun.

Can you reveal anything about what is going on and is it responsible for the cliffhanger?

Jason Inman: These two energy sources are the biggest clue to the reader that something is not right in the world of Jupiter Jet. And I would tell the readers to pay close attention to the different colors of the spheres and pyramids. The color choices brought to life by the wonderful Mara Jayne Carpenter are not by accident.

The cliffhanger was one of the very first ideas that my co-writer Ashley Victoria Robinson and I came up with. So I can confirm that the energy sources are responsible for the cliffhanger. But I’m surprised that no one has picked up on the bigger question from our backup “The Origin of the Jetpack” Part One.

The question isn’t what are these two blue spheres that her father acquired, the question is why does Jacky only have one? 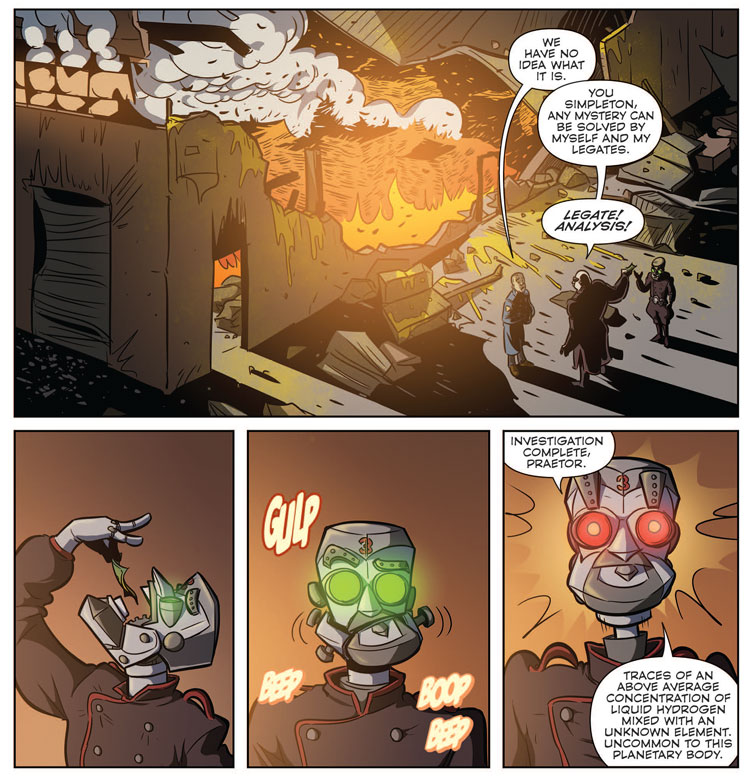 CC: In the scene on Page 6 what can you tell us about the use of Roman titles: Praetor, Legate, etc?

JI: Creating new villains is hard. You want them to have power and their names must exude power as well. We always knew that Jupiter Jet’s villain was going to be Pluto, and by giving him the Roman rank of Praetor, his world fell into place. Plus we enjoyed the alliterative name. There’s no more clues in their ranks besides the fact that Chief Beedle mentions other Praetors.

CC: There are a number of unique looking supporting characters throughout the issue. Is there any significance to them? Are they based on anybody in particular or are they just colorful characters?

JI: One of the best supporting characters that we made for this book is the entire brood of Legate robots! Almost all of them are based on friends of ours or Kickstarter donors that helped to make this book possible. (Fellow comic book writer Josh Elder is the unfortunate Legate that gets his head ripped off by Pluto.)

For some of the other citizens of Olympic Heights, we borrowed their name but not their likeness. (You’re welcome, Tim Beedle and Chris Bramante!) 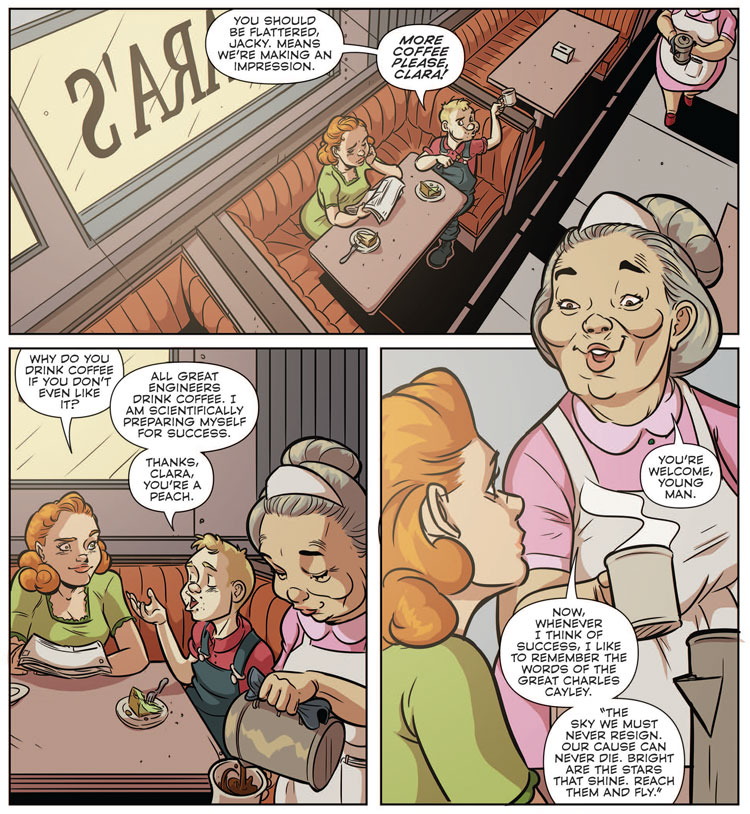 But if I was to point you towards one supporting character of significance, I would tell you to pay attention to Clara. She may simply be a waitress in our second issue, but there’s to more her than she seems. Plus she keep’s mentioning Jacky and Chuck’s father and says that she knew him.

Hmmm, if only we had a backup where we were telling a story about their father, then we might see more of her!

CC: Clara mentions a quote by Charles Cayley who is also mentioned in the first issue. What is the significance of Mr. Cayley?

JI: Charles Cayley is an homage to Sir George Cayley, who came up with the design for the first modern airplane. I love to include significance when naming characters of importance as I feel it gives the character an added depth more so than if you named them simply “Joe Smith.”

I will reveal that you will not meet Charles in Jupiter Jet Volume One, but he’s an important figure in this world. And you’ll find out why in issue five.

CC: Jacky has to face a strong fear of water in this issue. As we can see in the flashback she obviously had a traumatic moment in her past connected with swimming. Can you tell us more about this moment and why she hasn’t been able to get over it.

JI: Fear is something that all humans share. When developing Jacky for this series, Ashley and I wanted Jacky to feel like a real sixteen year old girl in a fantastical world. Part of accomplishing that was showing the readers some of her fears. Modern super heroes tend to be afraid of nothing; bounding into danger like its second nature.

That is not the case with Jacky. We wanted to show that each decision she makes is conscious. She takes the step to face her fear on her journey to becoming a better hero. I think if you almost drowned when you were five, you’d probably remember it vividly. Fear doesn’t go away; it’s forgotten.

CC: Praetor Pluto has seemed to be hiding something about himself and in this issue we see that he has a unique set of eyes. Is he being affected by something or is he something else entirely?

JI: This is one of the biggest reveals about Praetor Pluto in the series. I can’t say much about why his eyes are that way (see issue five) but I can refer you to my previous answer about the colors of the mysterious powers sources. One might make some connections there. 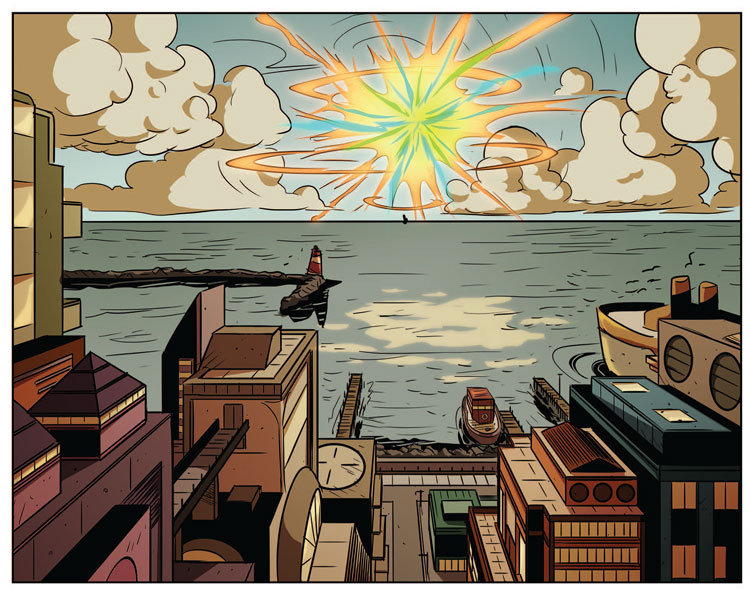 CC: It seems like the Jetpack went through quite a big explosion from the looks of things. How was Jacky able to survive the explosion? Will all that energy affect her in any way?

JI: Who said it was an explosion?

It may have looked that way to all outside observers, but on the very next page, Jacky is still flying high. An explosion would have vaporized her.

What everyone thinks was an explosion was the two energy sources (the blue sphere and the green pyramid) combining or syncing their powers together. This symbiosis shoots Jacky almost out of the atmosphere until her jetpack can’t take the increased power flow, hence the reason it breaks apart. These two energies are the reason that she couldn’t control her jetpack for the pages up to the explosion or as I like to call it, light show.

The energy of this won’t affect her in any way, but it will give her some clues as to the nature of Praetor Pluto and more. Remember, this whole story started when a little girl stole a green pyramid. 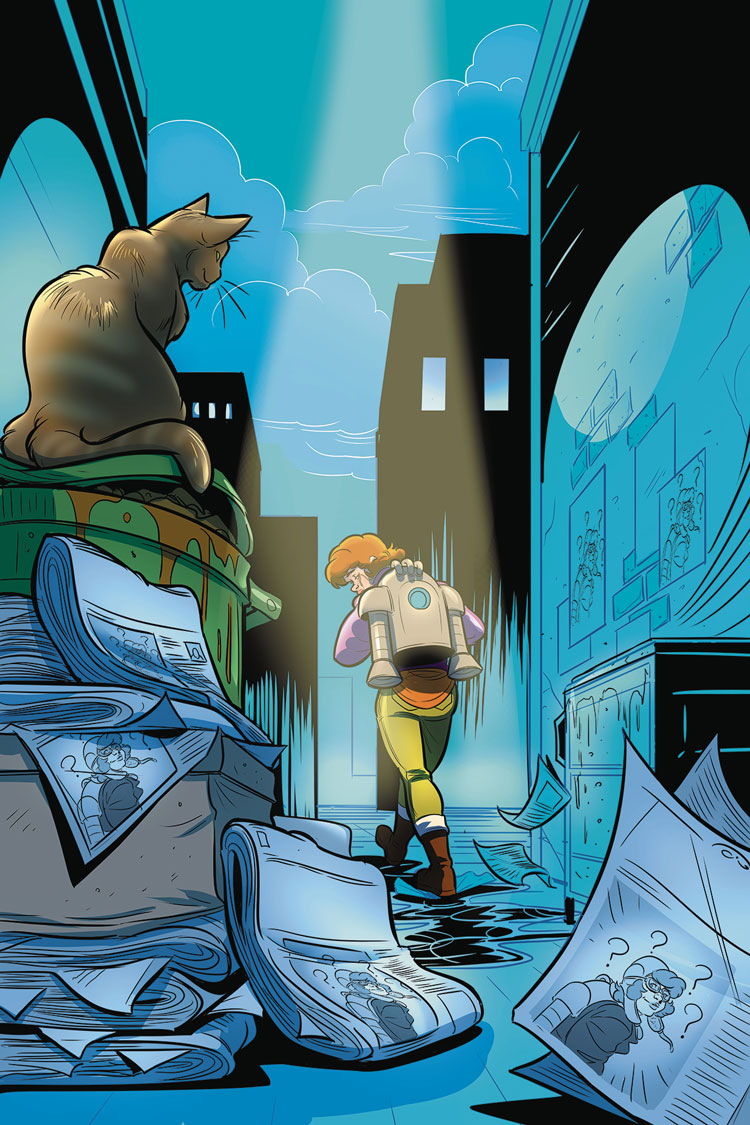 CC: In the back of this issue we get a sneak peek of the cover for issue 3. Is this an intentional homage to the famous panel from “Spider-Man No More?” If so then what does this mean for our hero?

JI: The issue three cover was all Ben Matusya’s, our wonderful artist, idea. He sketched up several thumbnails and we choose this one as our favorite. The “Spider-Man No More?” is completely intentional.

Issue three is our “Jupiter Jet No More” issue. Jacky and Chuck will have to face up to the consequences of the end of issue two. What will this mean for the future of their lives? And if you were strapped to a rocket that exploded, would you really want to put it on again?

Come back next month for another behind the scenes look at Jupiter Jet #3!