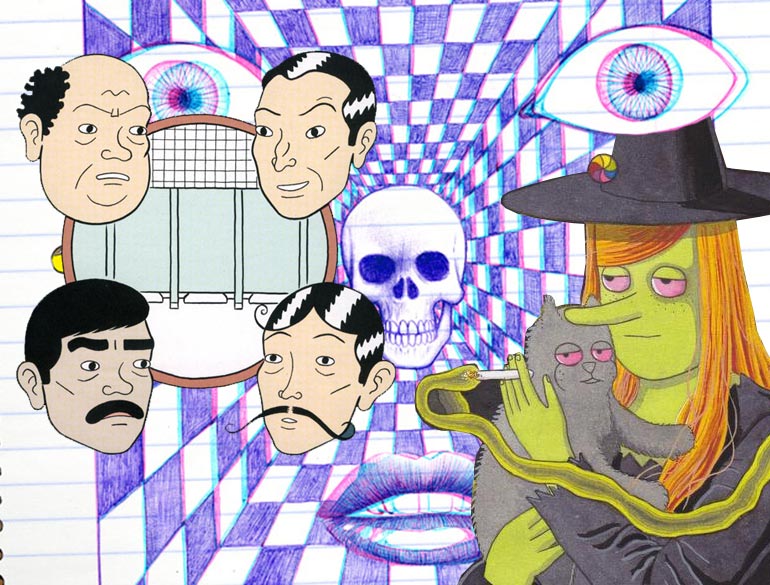 This year has been an excellent year for comics from both mainstream and independent publishers. A number of high profile indie books are already gracing many “Best of 2014” lists, including Farel Dalrymple’s The Wrenchies, Bryan Lee O’Malley’s Seconds, Charles Burns’ Sugar Skull, and Emily Carroll’s Through the Woods.

All of these are fantastic books that I highly recommend, but I thought it also might be good to note some of my favorite indie comics of the year that might have flown under your radar. These are in no particular order, and I believe there is a little something here for everyone!

Do you have a favorite indie comic you think people missed? Be sure to post it in the comments! 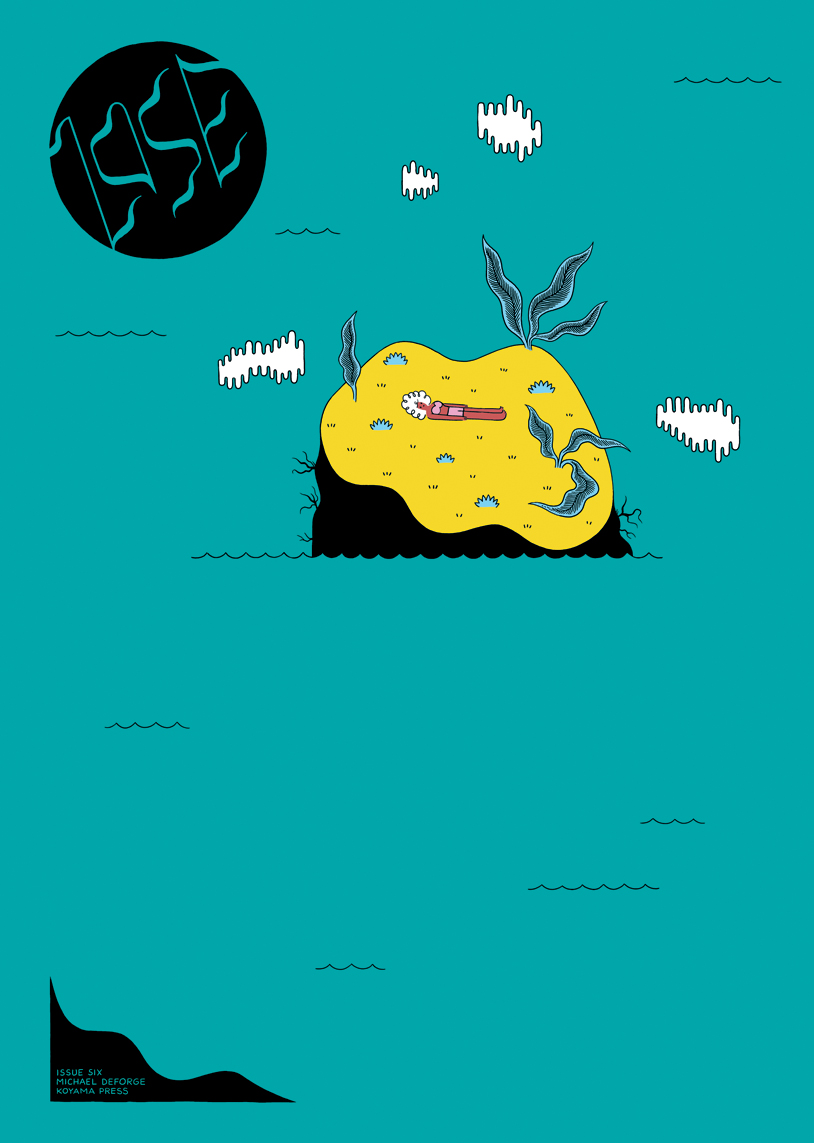 Not only is this my favorite book that flew under people’s radar, but it was my top book of the year! Lose #6 features some of DeForge’s best storytelling with characters that are taken through a dark, twisted world where people succumb to their weirdest and wildest fantasies. This comic is equal parts outrageous and funny with DeForge’s bold artwork serving as the perfect vehicle for a story about an aunt getting back her niece’s clarinet. Plus, there are some wonderful bonus stories in this issue, including “Dogs of Canada.” 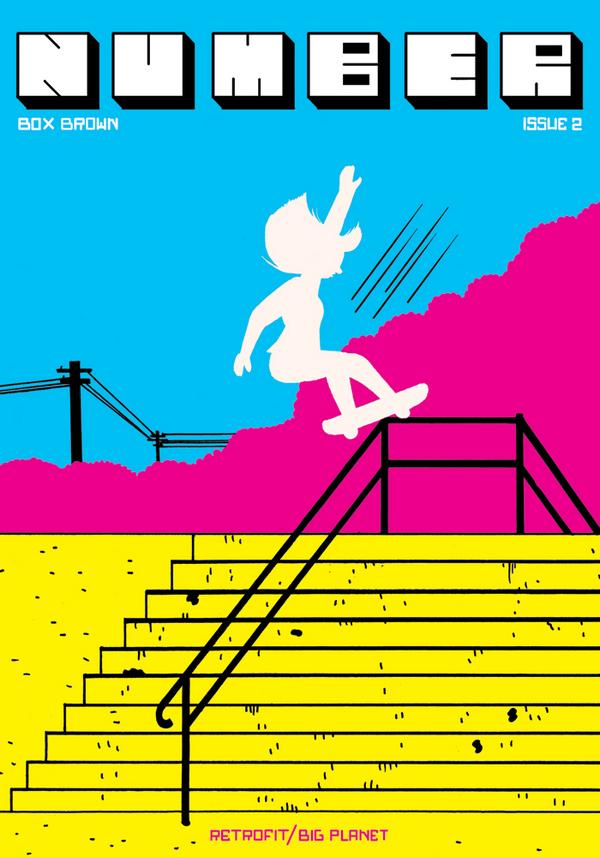 Box Brown may have made a lot of waves with his excellent biography Andre the Giant this year, but his series Number packs quite a different punch. The first story of the issue, “Sk8r H8r,” follows a 33-year-old skater woman, while the second story, “Elroy Mirrors’ Big Score,” focuses on a filmmaker as he works through balancing his online and offline life. These stories feature Brown’s distinctive, heavy inking that dramatically stands out on the white pages but also allows for pure, subtle emotions to breathe life into each panel. While seemingly mundane, there is a lot of depth to these stories that justifies many rereadings. 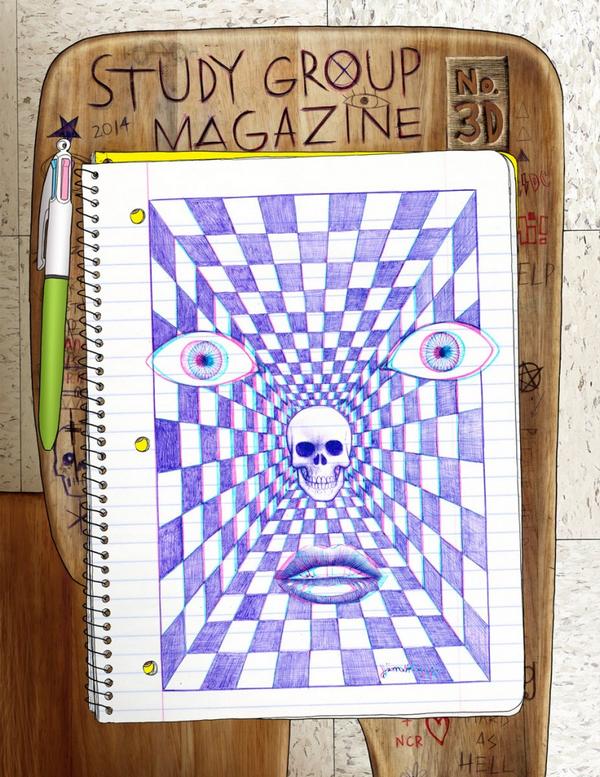 It’s hard to argue with loving a comics magazine that features a killer lineup of artists and writers that also boasts awesome 3D art! Each page is packed with great work from creators such as Connor Willumsen, Mia Schwartz, Sophie Franz, James Romberger, Chris Cilla, and so, so many more. In addition to outstanding comics, Study Group Magazine 3D features articles such as “Periodic Fortunes of a Periodical Form: The Rise and Fall and Rise and Fall and Rise of 3D Art,” and “Good Old Ray: A Kim Deitch Interview in 3D.” Literally each page of this magazine is packed with cool stuff. 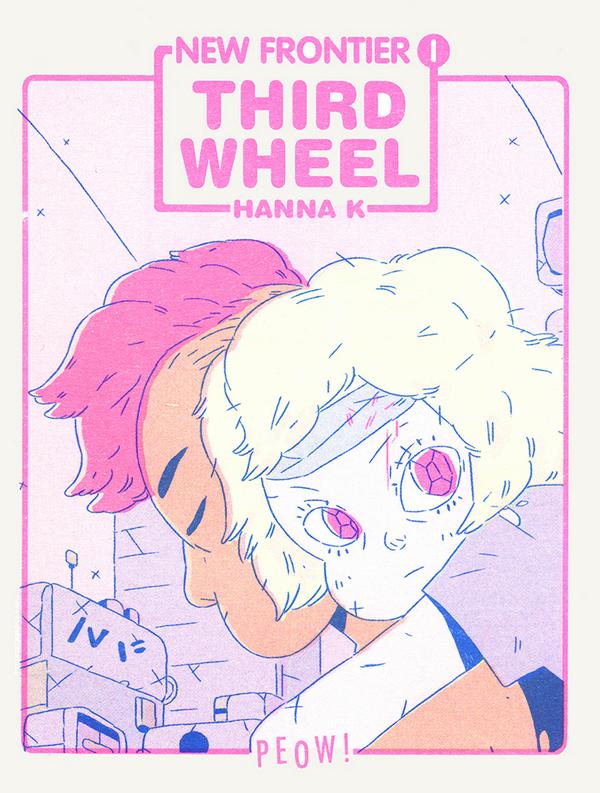 I hadn’t heard of Sweden’s Peow! Press until recently, but this is a heck of an introduction and I can’t wait to see more comics from them. New Frontier: Third Wheel follows two boys living in a space station “in the distant future of 2007” as they discover a girl buried in an explosion. This short story is packed with heavy action and emotion as they try to conceal their new friend and set about building a better life. Of all of the books listed, this one should appeal the most to kids as much as adults. I really, really hope New Frontier turns into a series. 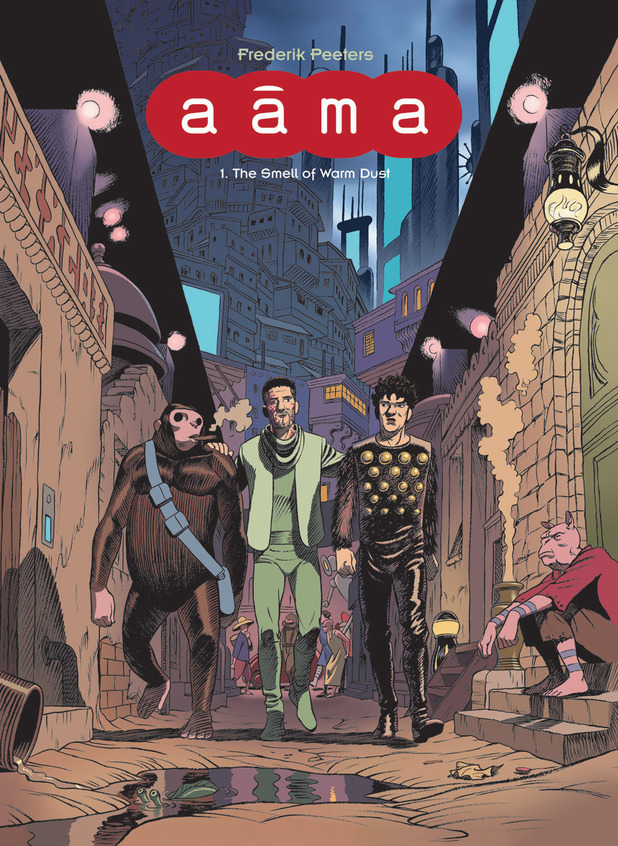 This year saw the English release of Frederik Peeters’ Aama Volume 1: The Smell of Warm Dust, and Volume 2: The Invisible Throng from British publishers Self Made Hero. In this series, Peeters has created an exceptionally beautiful and curious world in the future that balances science fiction, mystery, and existential exploration with grace and gravity. A man down on his luck, his robot ape companion, and his brother set off on a journey that is unlike any other you will read this year. Don’t miss the ride.

What happens when a man is trapped with a rabbit in a snowstorm? Some crazy things, that’s for sure. While I thoroughly enjoyed reading this one as a minicomic, you can read it in its entirety online here. 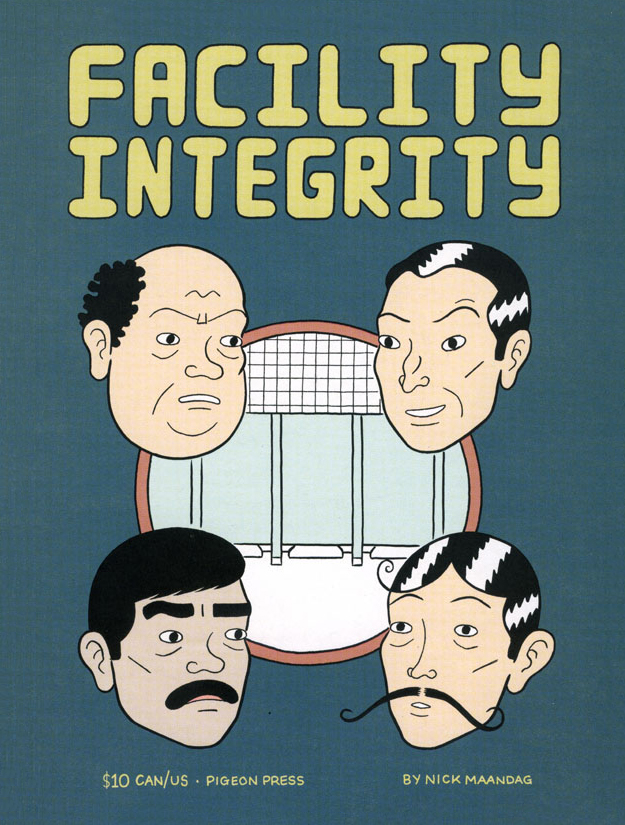 Facility Integrity is without question the funniest comic I’ve read this year, and it should be required reading for anyone that likes comics and works in a corporate office. The premise is simple: going number two in the bathroom slows down productivity at work, so the solution must be to enforce a “number one only” policy. This comic features sharp, witty humor that is sure to entertain its readers. 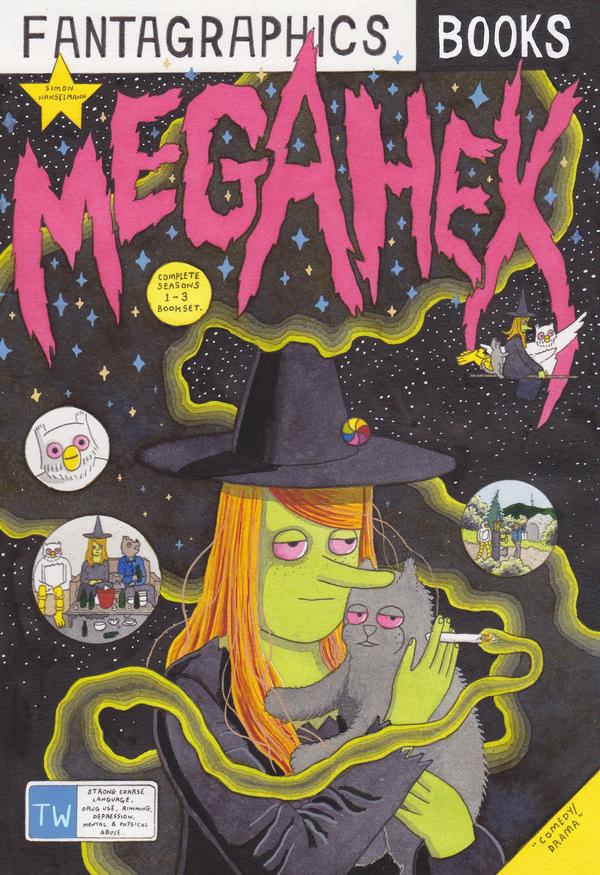 Of all of these comics, Megahex seems like the one you’re least likely to have missed, but it still needs to be included because it’s just that damn fun. Megg, Mogg, and Owl are a witch, cat, and owl that hang out doing stuff that people hanging out do. You know… smoking pot, getting too drunk, going to parties, and causing a ruckus. But it’s much more than that, as they deal with interpersonal relationships and feel melancholy about their screw ups. Until the next party, that is. This book might leave you confused about whether to laugh or cry, but it’s undeniable that Hanselmann’s unique art and vibrant colors make it great to look at. 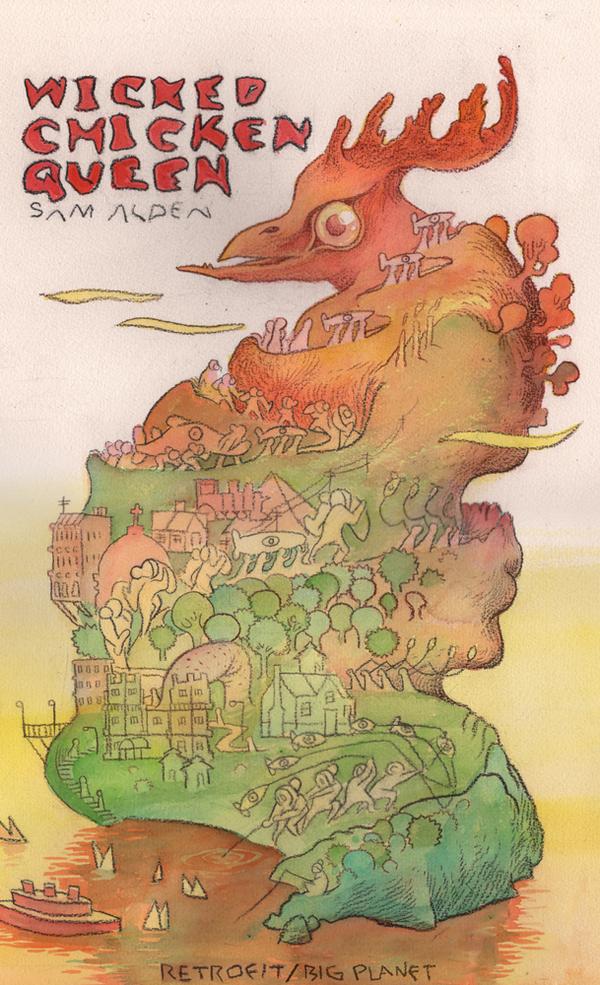 Your indie comic friends might have been telling you about Sam Alden for some time now, and with good reason! Wicked Chicken Queen features the touching tale of a community that raises a beautiful chicken queen but faces challenges as time moves forward. Alden’s pencil artwork is a clear standout here, with groundbreaking scene composition and striking representations of the queen and her people. Don’t skip this touching book that won the 2014 Ignatz for Outstanding Comic.