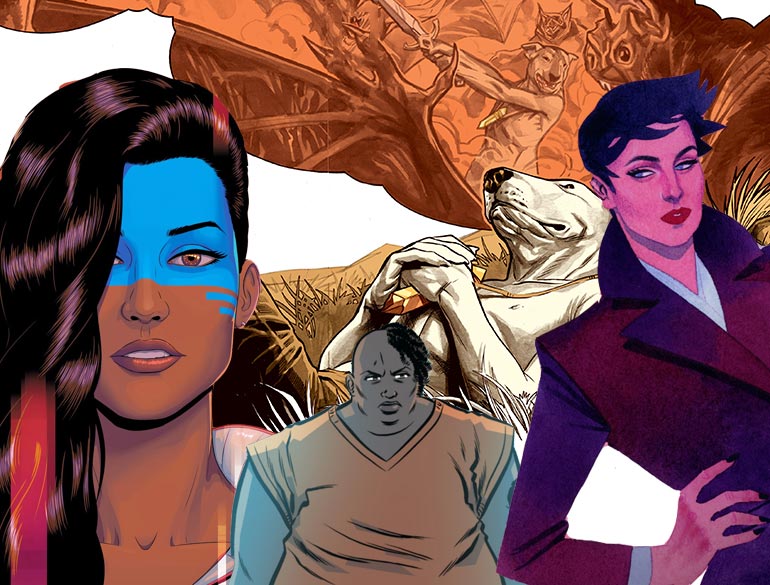 The year is winding to a close, which got us to thinking…what were the best comics of the year? The Comicosity staff has gathered and submitted their top picks of 2015, today being Best Series: 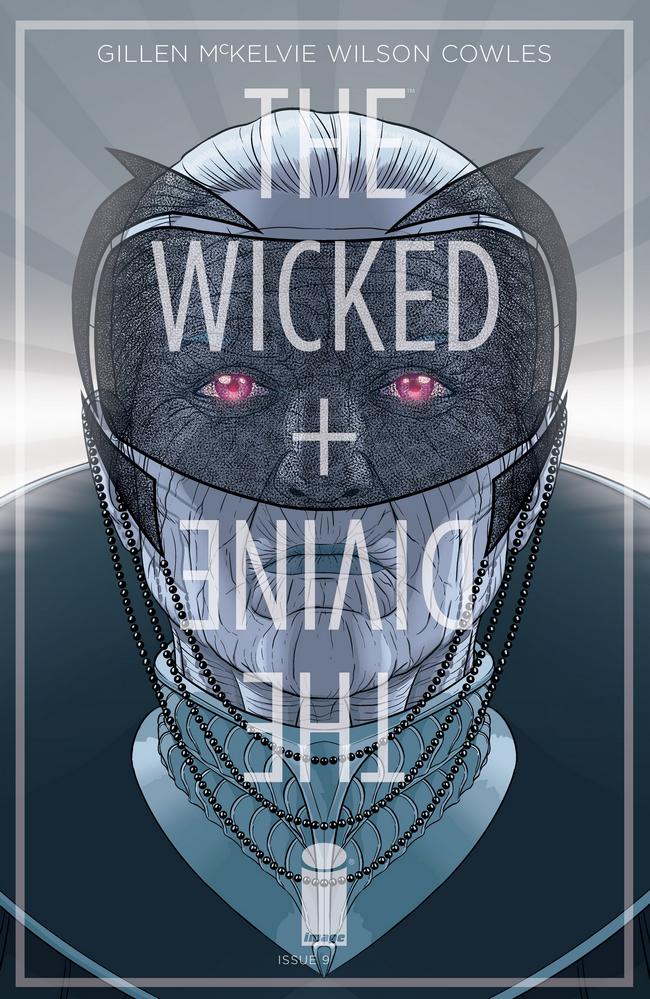 There continues to be nothing quite like The Wicked + The Divine on the shelves. It’s an ambitious plan disguised in a pop narrative, a wonderful blend of high-concept mythology and ground-floor, day to day human drama. The book is gorgeous and smart, but it’s also emotionally brutal. Writer Kieron Gillen has talked about WicDiv as a story about being a creator; in 2015 it was very focused on destruction. Jaime McKelvie and Matt Wilson delivered career-best art, especially Wilson (I’ll get to him later), while the Commercial Suicide arc has introduced readers to other immensely talented artists who couldn’t be more different than McKelvie if they tried. It was a risky move on Gillen & McKelvie’s part – not just changing the entire look of the book, but upending the narrative structure on us (and as a reader I AM NEVER GETTING OVER IT). From Persephone to the Woden Remix issue to Tula Lotay’s heartbreaking Tara one-shot, WicDiv continues to deliver more punch per issue than any other title, while also refusing to conform to reader expectations. Extra points this year for being meta beyond meta with the use of Chip Zdarsky’s Sex Criminals art. 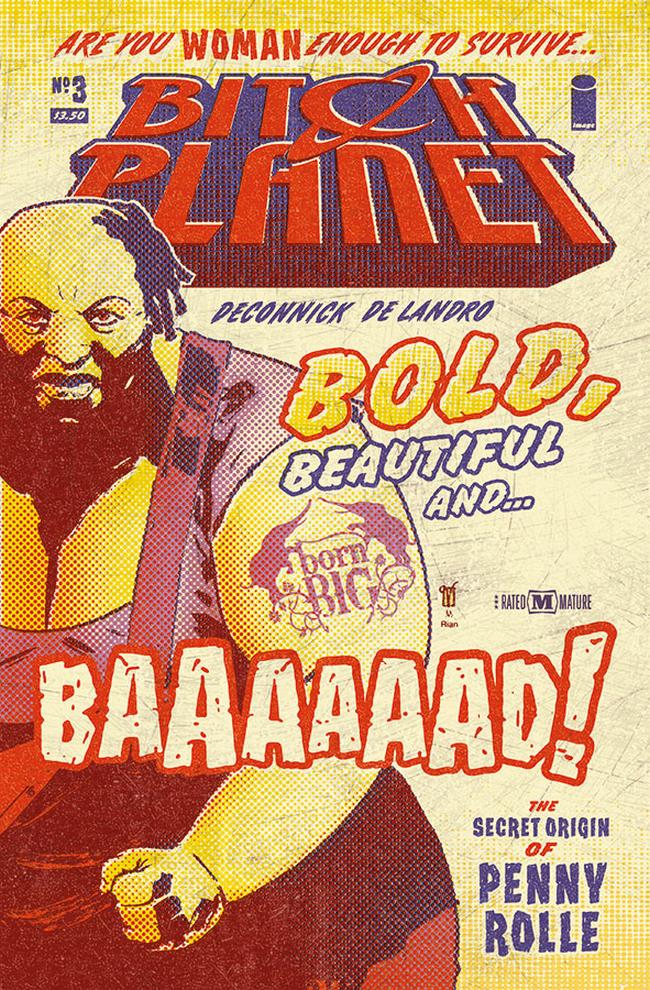 From the very first issue, Bitch Planet felt like a game changer. Set primarily within the confines of an all female, off world penal colony, Bitch Planet toes the line of exploitation to such effect as to leave readers physically unsettled and itching to get their hands on the next issue. By tackling misogyny and toxic masculinity head on DeConnick and De Landro have created a story that has resonated with fans on a visceral, as well as an intellectual, level. The crime of non-compliance, something so many women have been made to feel guilty of, struck a particularly loud chord with fans, including myself. As such, many of us now wear our labels of non-compliance like badges of honour, inked into our skin. 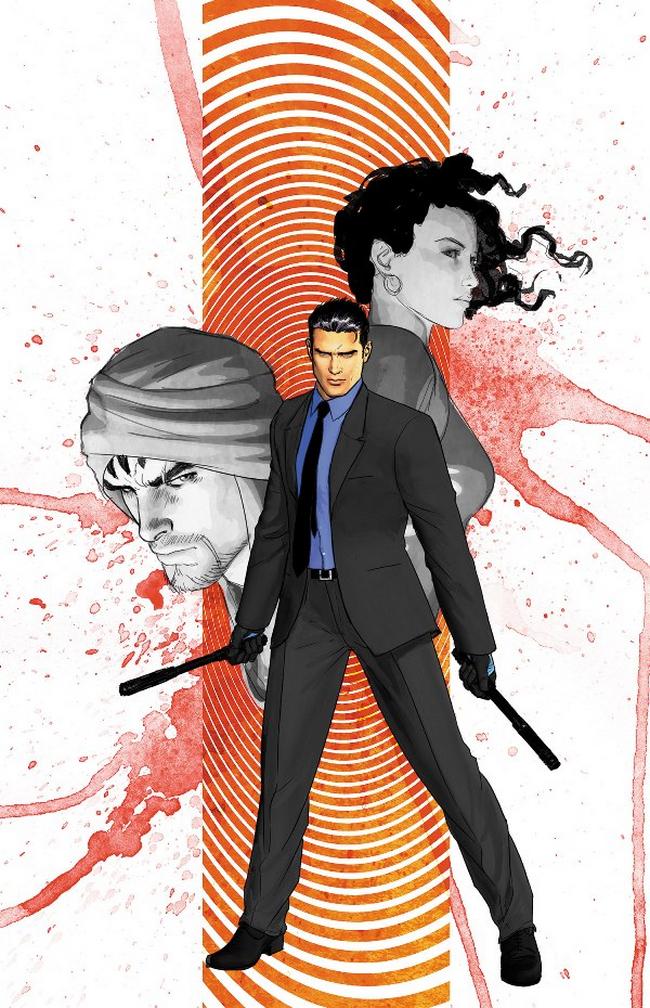 After going through all of my favorite comics of the year trying to figure this category out, I found myself going back to Grayson over and over again. There have been series I liked more for short bursts of time, but nothing that stretched from the start of 2015 to the end (noting the small Convergence break) quite like Grayson. The veteran writer Seeley, and the future superstar King melded the spy and superhero genres into something wonderful. Every single issue this year did three things. First, and foremost every issue was fun. Second, every issue pushed the central mystery of the series forward. Third, and most importantly, every issue moved the story of Dick Grayson forward. Eventually, we even saw Dick make his way home to Gotham in a wonderful homecoming. Throw in the amazing art of the great Mikel Janin, and the solid fill-ins from Stephen Mooney, and you have one of the best looking comics of the year as well. Action, fun, sex, spy craft, and super heroics, Grayson had it all in 2015. 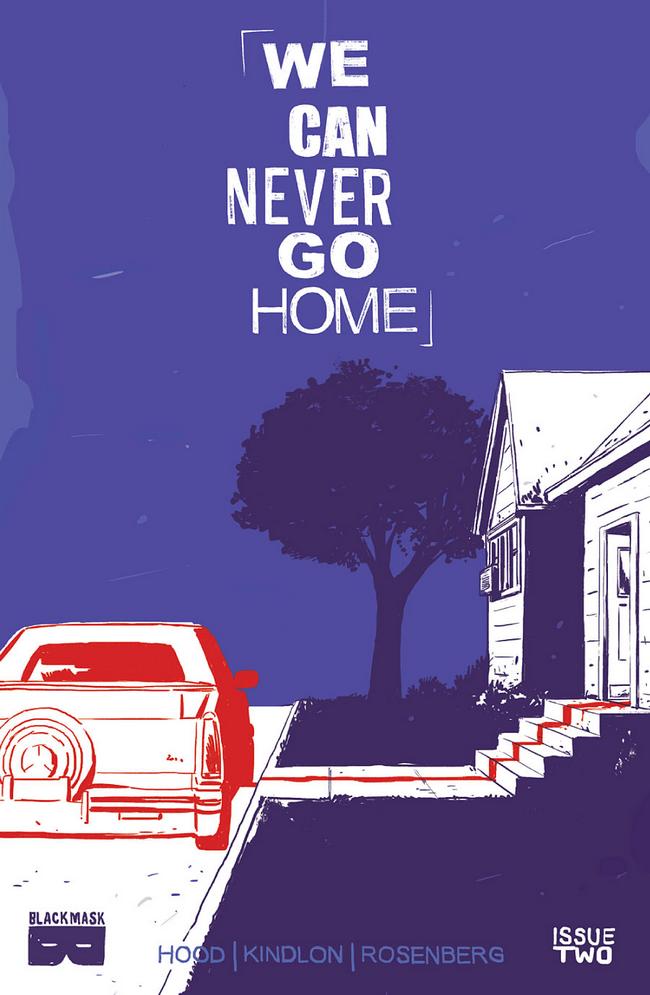 We Can Never Go Home

We Can Never Go Home has stolen my heart, and I doubt I’ll ever get it back. This series from Black Mask Studios exploded onto the scene earlier this year, charging full speed ahead to produce five of the best issues of story-telling I could ask. Despite inconsistent shipping schedules and long periods of time between issues, this was easily my most anticipated book throughout the year. Writers Matthew Rosenberg and Patrick Kindlon created a beautiful world with this new series, instantly presenting relatable characters and a maddening plot. Joshua Hood (with Brian Level guest art) was a superstar unto himself, beautifully depicting this insane new world and nuanced characters. This series had some of the best moments in it, from Maddie and Duncan’s foray into superhero costuming which turned into the best commentary on female superhero outfits ever, to some of the most brutal fight scenes I’ve seen of late. We Can Never Go Home is truly a masterpiece in sequential story-telling. 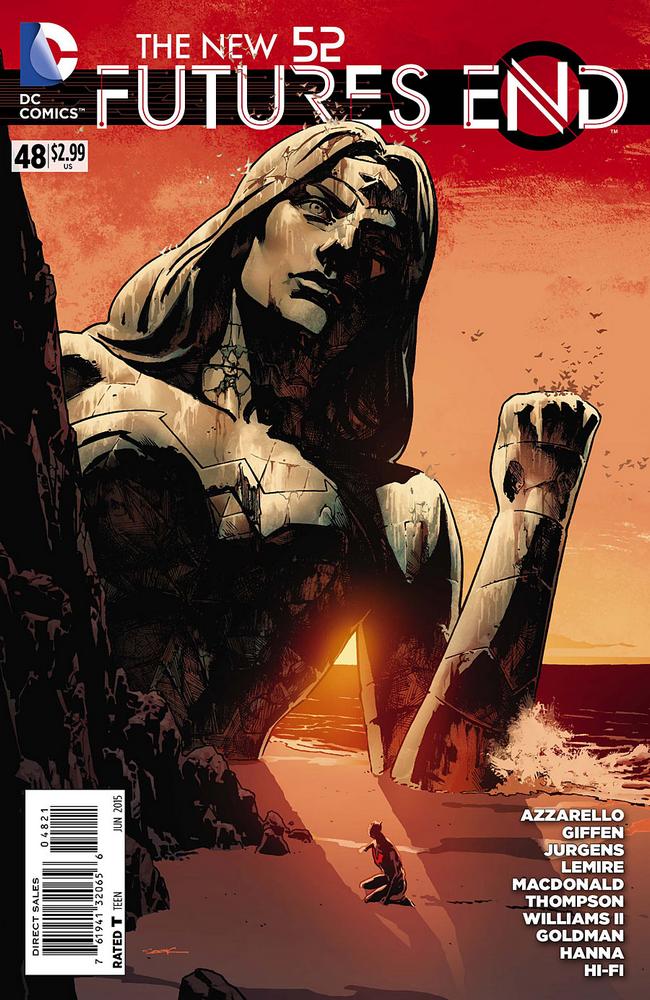 I wondered if I should pick a series that ended in April, but there were still 13 issues of this weekly gem in that short window.

Futures End had that 52 magic. A weekly serial following engaging characters in universe-spanning adventures, this series was my first read every Wednesday for the whole run. I love alt-futures so this series was right up my alley. I pity those who judged the series based on the Free Comic Day issue because that was just one beat of an orchestra of wonderful super-hero comics. 52 veteran Keith Giffen’s Fifty-Sue is much missed since the end of the series. 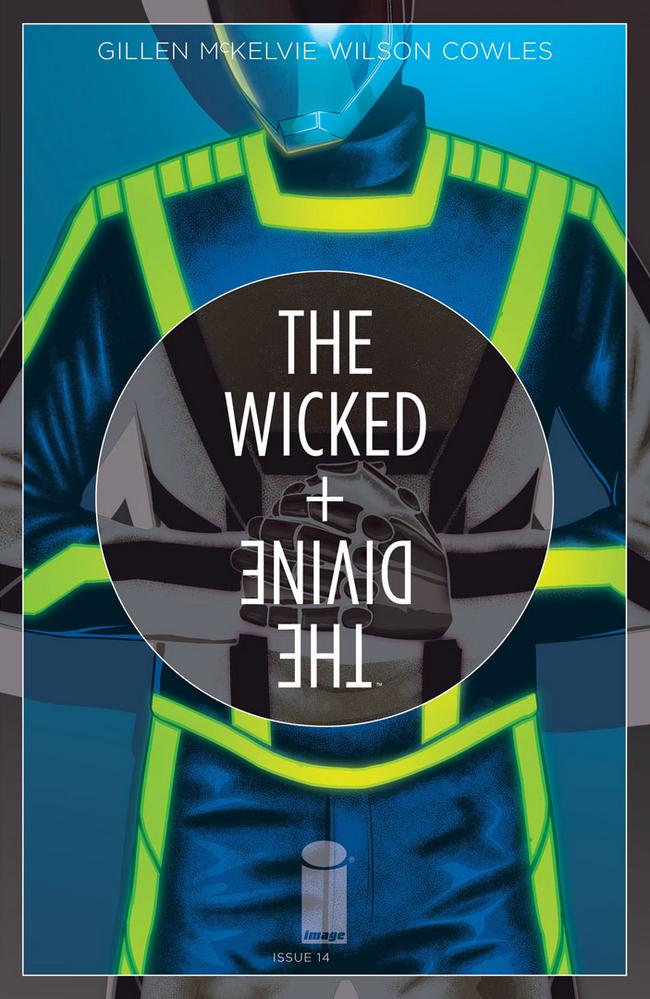 The Wicked + The Divine came hot off the shelves of 2014 with the bravado of a teenage fashionista pretentiously using the word “avante garde” at an underground rock festival. What came off as shallow and vain in 2014, Gillen, McKelvie, and Wilson has finally developed this series into something not only as beautiful and cool as it appears, but with a heart and a mythology that readers I couldn’t get enough of. 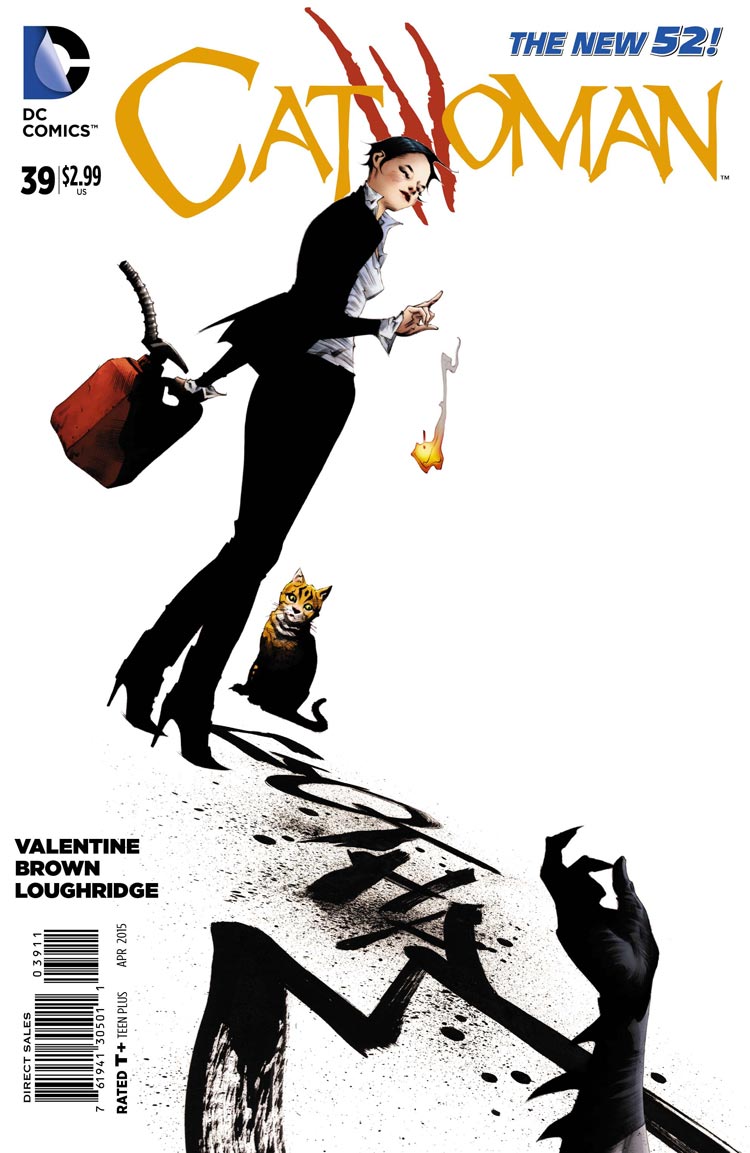 Sigh. No run was as big a turnaround for any title — ever — as Genevieve Valentine’s year-long epic storyline on Catwoman. Selina Kyle went from headlining DC Comics’ worst comic title to its best with the flip of the wrist and the shedding of her frequently unzipped leather catsuit. Crowned the queen of Gotham City’s mob families, and having to manage all the politics and danger that involves, Selina was the perfect combination of grace, intelligence, ruthlessess, and compassion.

A year later and Catwoman may be back where she started, but we’re left with a story imbued with the history of great women leaders, traumatic decisions, and love amidst tragedy. We’ve gotten the bisexuality of Selina Kyle confirmed, gotten inside the complex world of Gotham mafia, and been introduced to a brilliant new antagonist in Eiko Hasigawa. Was it all worth it? And then some. 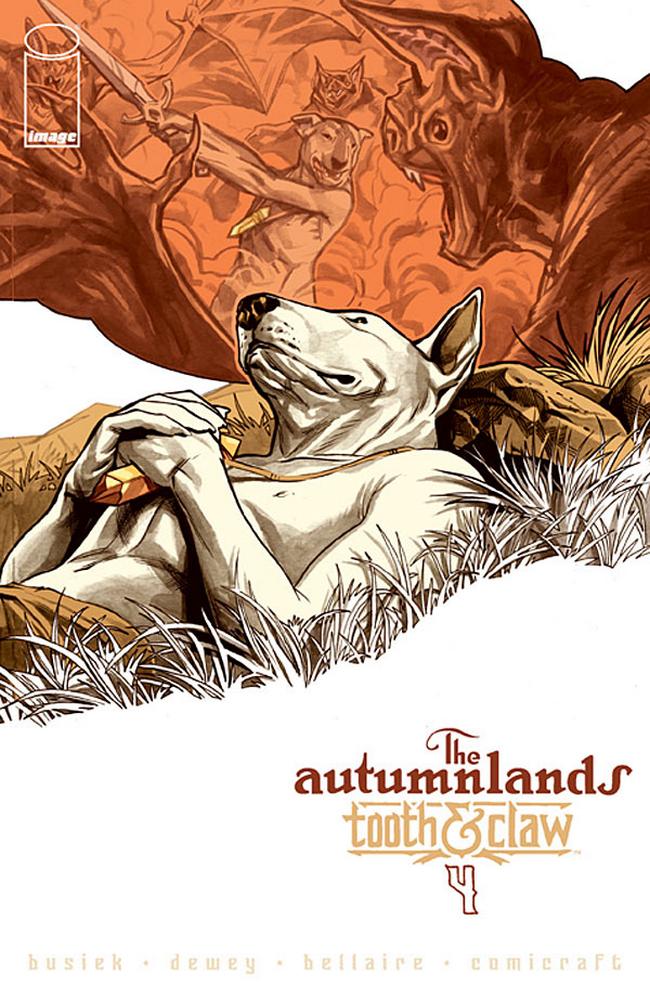 Oh, The Autumnlands. I have become completely enthralled by this world and the characters Busiek, Dewey and Bellaire have filled it with. It is a world of anthropomorphic magic wielding animals with all kinds of politics to go with the fantasy, and one foul mouthed human who stirs up shit wherever he goes. The world is rich and easy on the eyes with the fantastic artwork from Dewey and Bellaire, and Busiek’s script are some of the best of his career. This series has been my go-to read as soon as a new issue has been released in 2015 and I don’t see that changing as the saga of The Autumnlands just gets more engrossing with each page.