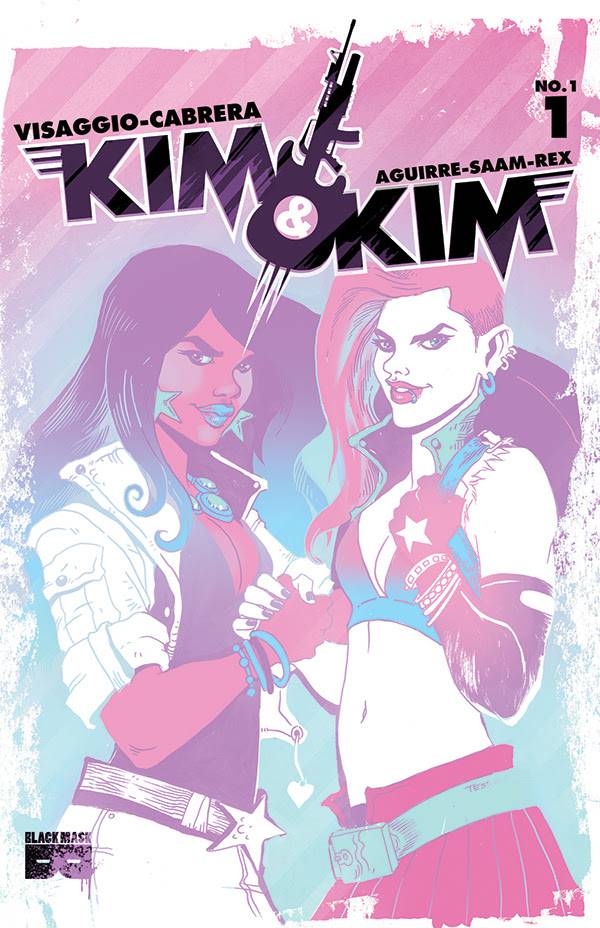 BLACK MASK STUDIOS, the publishing/production company launched in 2014 by Matt Pizzolo (Occupy Comics, Halo-8 Films), Brett Gurewitz (Bad Religion, CEO Epitaph Records, ANTI- Records), and Steve Niles (30 Days Of Night), has unveiled its third slate of comics: a dozen projects principally from new creators bringing bold and unorthodox points of view to their comics. After a banner 2015 with breakout hits We Can Never Go Home, Space Riders, and Young Terrorists, Black Mask is doubling down on its emerging reputation as the hottest launchpad for new comics talent.

“Black Mask is here for the risk-takers, for the daring creators that make other publishers nervous,” said Pizzolo. “Our goal all along has been to advocate for brave storytellers, but what’s been incredible for me to see is the comic market really step up and support these books and these creators. From the comic shops to the journalists to the readers, there is both a demand for new voices but also, and more importantly, a nurturing community enabling creators to take artistic leaps of faith.” 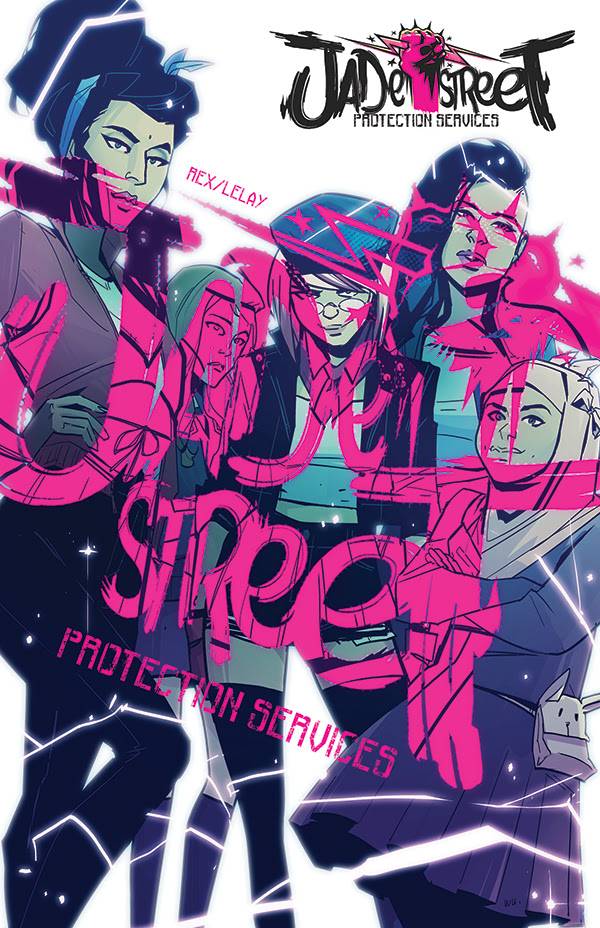 Jade Street Protection Services follows a group of (bad) students at Matsdotter Academy, an elite private school for magical girls. When they all meet for the first time in a totally unfair detention, these punk rock witch delinquents cut class and discover the fates Matsdotter has in store for them are even more sinister than they suspected.

Another one from an all-new creative team, Kim & Kim is a Tank Girl-esque buddy adventure about a trans woman and her best girlfriend.

Kim & Kim is a day-glo action adventure that’s bursting with energy and enthusiasm and puts queer women and trans women front and center. Badass besties Kim and Kim are out to make a name for themselves in the wild world of interdimensional cowboy law enforcement – and they very quickly end up in way over their heads.

Blending the punk exuberance of Tank Girl with the buddy adventure wackiness of Superbad (if Michael Cera was a trans woman and Jonah Hill a queer girl partner in crime), Kim & Kim focuses on the power and meaning of female friendships as engines of validation. A bright, happy, punk rock sci fi adventure that is queer as shit. 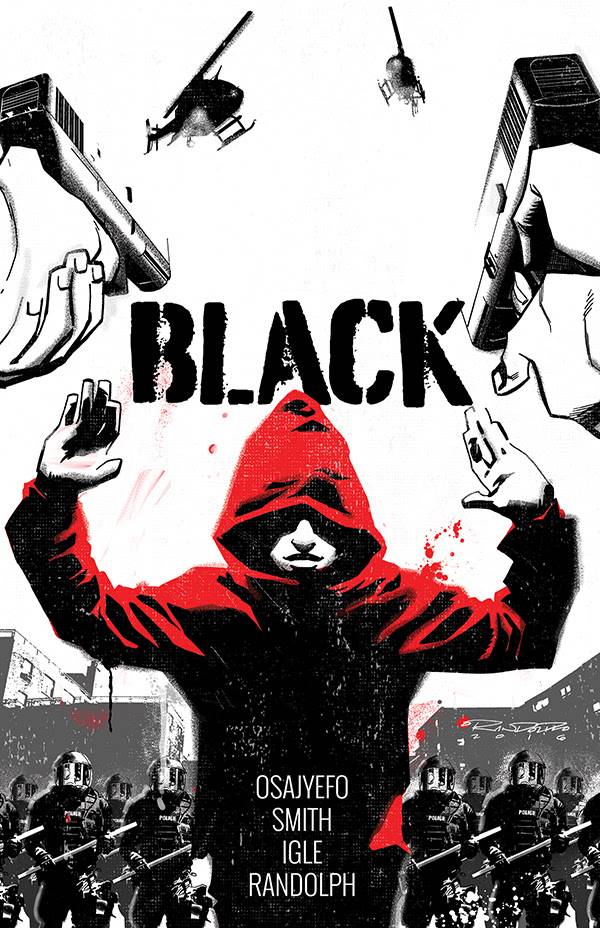 In a world that already hates and fears them – what if only Black people had superpowers?

After miraculously surviving being gunned down by police, a young man learns that he is part of the biggest lie in history. Now he must decide whether it’s safer to keep it a secret or if the truth will set him free. 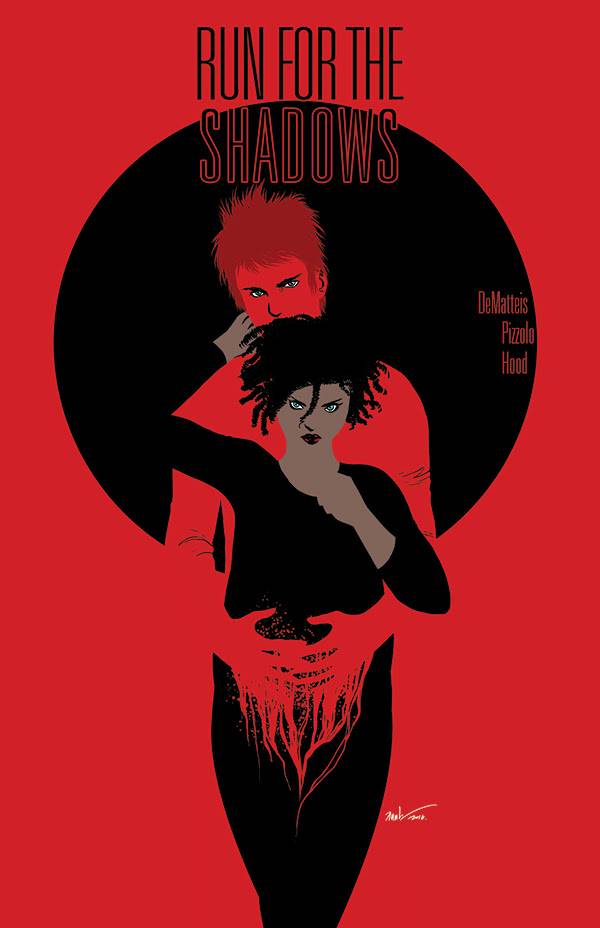 RUN FOR THE SHADOWS

Julie was a good girl from an elite family with her whole life ahead of her, until she got mixed up with bad boy Winston. After a decade of hard drugs and harder living, Julie is finally pulling her life back together. In rehab, she undergoes intensive therapy that unearths a deeply repressed trauma: her memory from being 16 and giving up her and Winston’s baby for adoption. She realizes it’s a lie. An implanted memory. There was something else that took the baby. Something evil. Julie tracks down Winston and forces him to tell her what truly happened, a horrifying revelation that will lead them both on a journey into darkness.

A lyrical and fantastical tale of rebellion, redemption, and hellfire, but, most of all, a story of family.

From legendary writer J.M. DeMatteis, co-written by Matt Pizzolo fresh off his smash hit Young Terrorists and illustrated by Josh Hood still on fire from We Can Never Go Home. 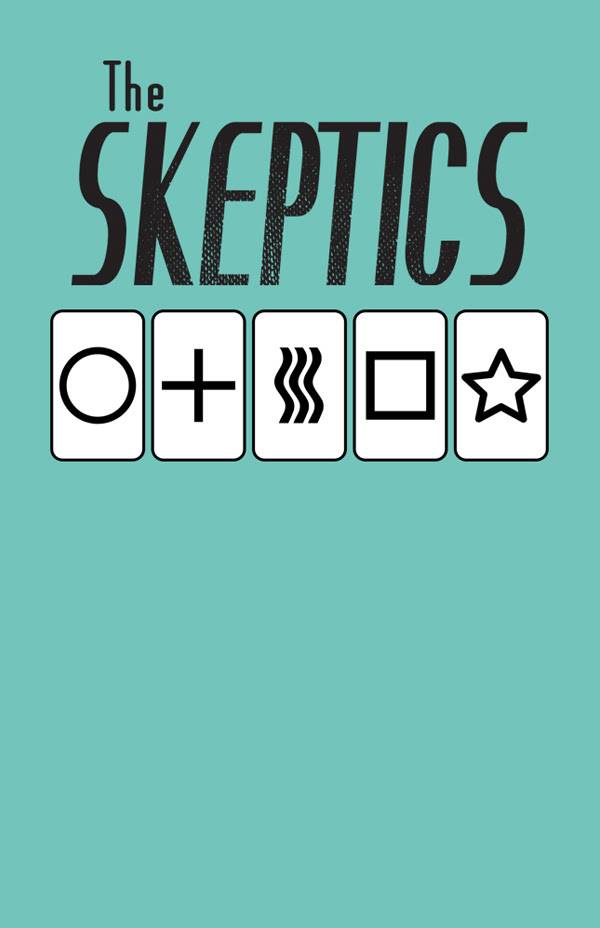 A stylish, period, political adventure about a pair of hip, clever teens who fool the world of the 1960s into believing they have superpowers. Like X-Men: First Class meets Project Alpha.

It is the 1960s. The Russians have the A bomb, the H bomb, and now the most terrifying weapon of all: a pair of psychically superpowered young people. Terrified and desperate, the US top brass scours from coast to coast in search of psychic Americans. Enter Dr. Isobel Santaclara, an eccentric illusionist and grifter who has recruited two teenagers and trained them to trick the US government, the Russians, and the whole world into believing they are dangerous psychics. Skeptical is a pre-punk period piece, a sort of honest, unfuzzy, non-nostalgic look at the Cold War 1960s in DC.

Featuring female doctors, black female college students, and other genius “undesirables.” Like a cross between Kill Your Boyfriend and Hard Day’s Night, but about politics and ethics and how punk rock it is to be the smartest person in the room. 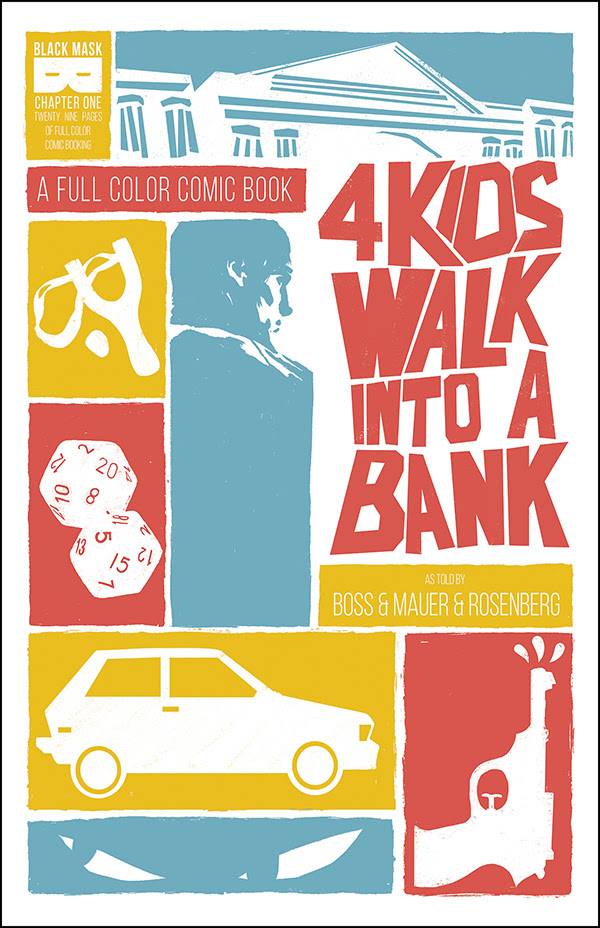 4 KIDS WALK INTO A BANK

What is it?
A FUN(ISH) CRIME CAPER ABOUT CHILDREN!

11 year old Paige and her weirdo friends have a problem: a gang of ex-cons need her dad’s help on a heist… the problem is those ex-cons are morons. If Paige wants to keep her dad out of trouble, she’s going to have to pull off the heist herself. 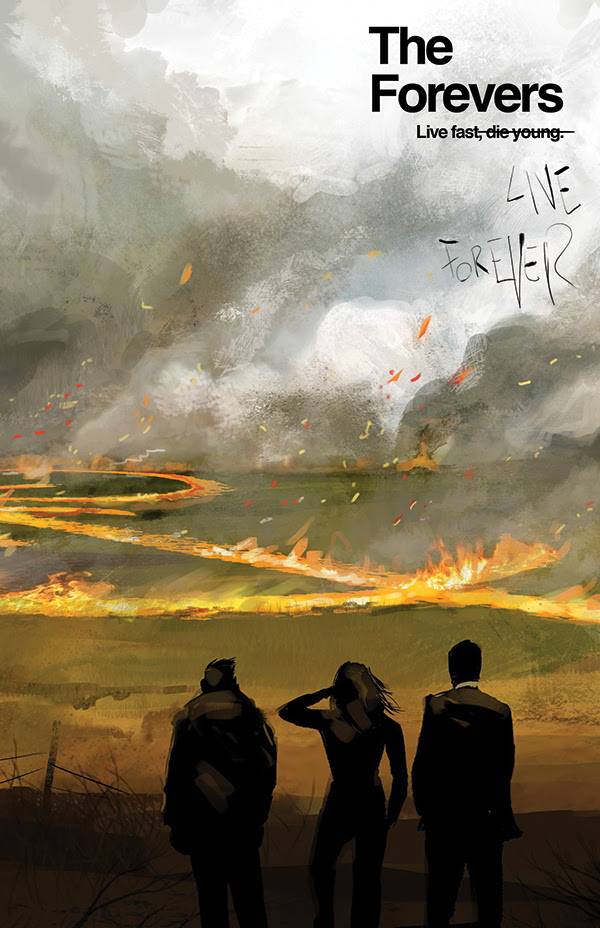 Five friends struggling on the brink of stardom sacrifice everything in a black magic pact that brings them all the wealth and glamour they ever wanted. But now, years later, the glow is fading. When one of them is killed in an accident, they each feel a pulse of magic rise in them. They realize the glow is spread evenly among the group, and if one dies that power is passed along to the rest. Suddenly, they are being hunted. One of them has decided to kill the rest and harness the remaining power.

As they search for the killer, each of The Forevers will be confronted by the macabre reality of the lengths people will go to be adored, to make sure the spotlight never fades. 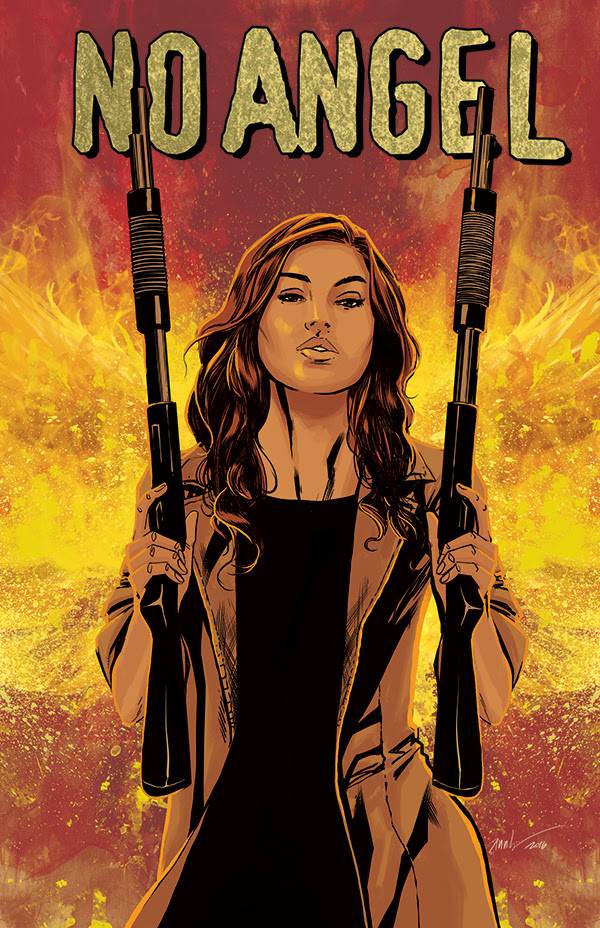 Religious texts from The Bible to the Sumerian tablets speak of strange creatures descending from the heavens and mating with humans, their children the superhuman heroes of myth. None of this ever meant anything to Iraq War veteran Hannah Gregory, until she found herself in the crosshairs of a dangerous cult convinced that she’s a descendant of these dangerous bloodlines… bloodlines they’re determined to eradicate.

No Angel is a cosmological and conspiratorial modern western in the style of Preacher meets Justified by way of Jodorowsky. 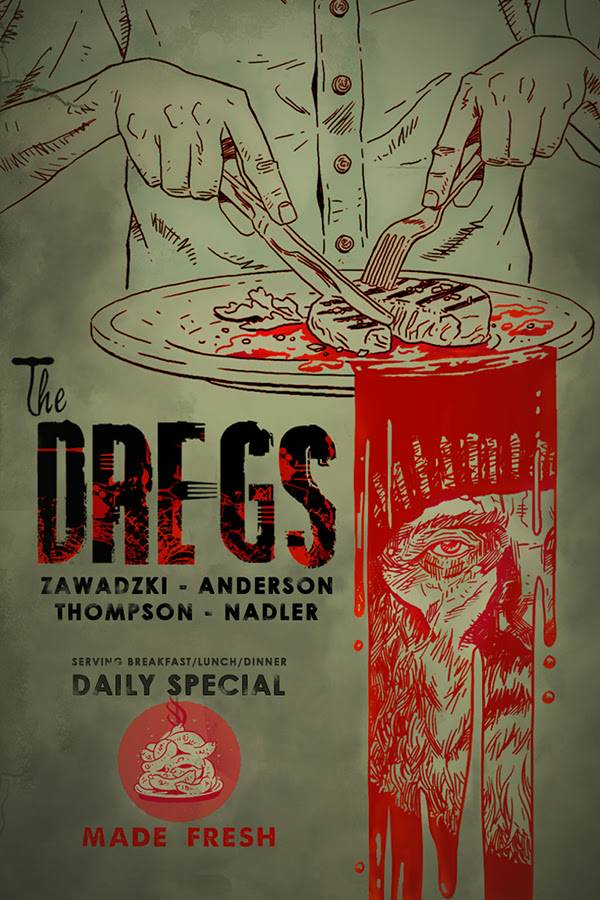 In this bloodsoaked satire of gentrification, an exclusive new restaurant called Pijin becomes the hottest spot in town by serving high-end dishes of human flesh. Where is the meat coming from? No one knows for sure, but a drug addled homeless man named Arnold Timm notices his friends disappearing and is determined to find out if they’re being fed to the rich.

A modern spin on Sweeney Todd in our world of excess where a touch of celebrity can make even cannibalism seem downright sexy. 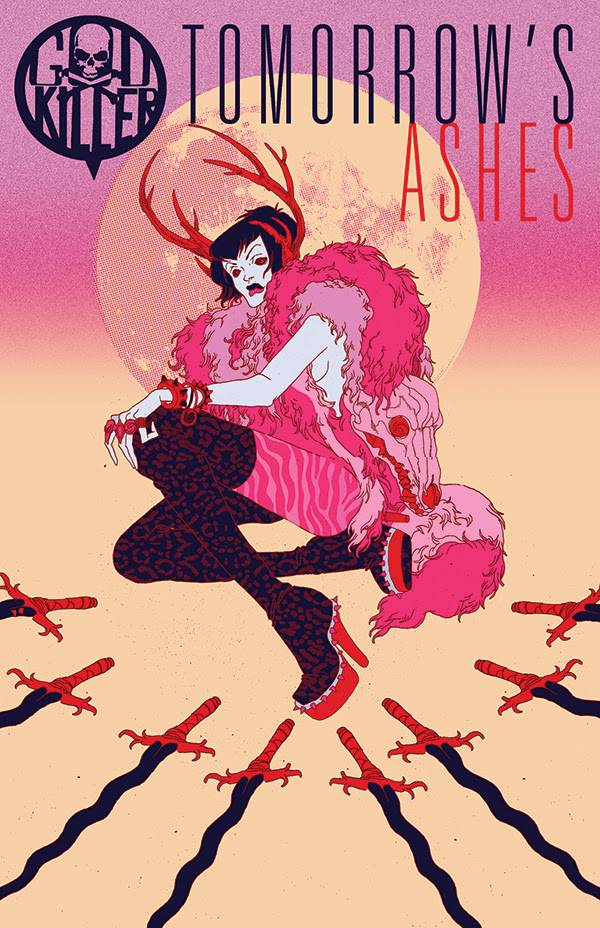 The creators of Godkiller (one of Kirkus Reviews’ Best Books of 2015) return for an all new saga.

In a twisted future where America has been divided into warring city states, escaped slavegirl Halfpipe and grifter Soledad roam the savage land on the fringes between civilizations. When they come upon a strange relic, they will uncover a secret history of America’s destruction.

This grimy apocalyptic fantasy manages to be simultaneously fun and horrifying, both brutal and intellectual, a unique descent into the American nightmare. 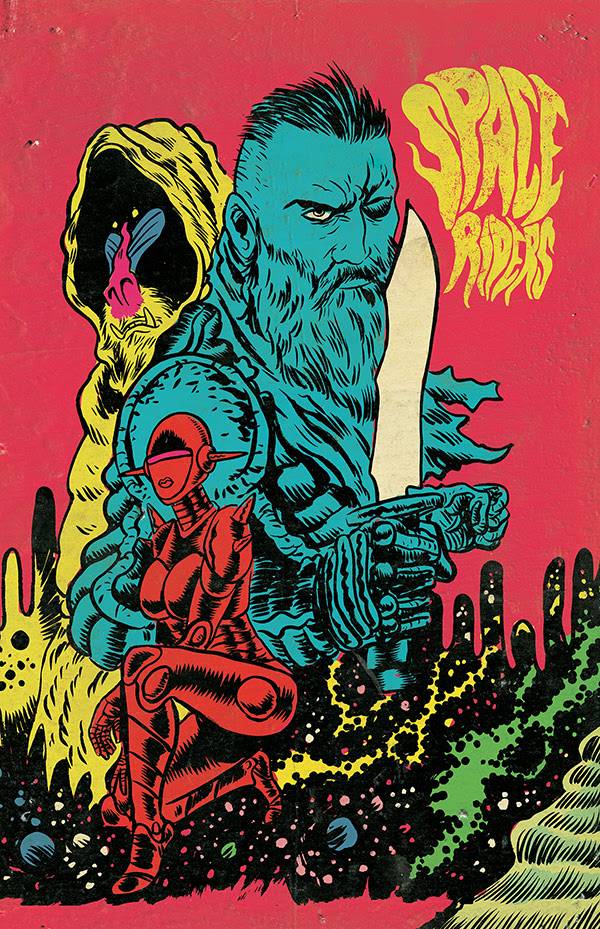 The Skullship Santa Muerte rides again as the creators of Space Riders (one of The Village Voice’s Outstanding Comics of 2015) return.

An ancient evil is gathering power throughout the cosmos, and it falls upon the legendary SPACE RIDERS to kick its a**! Having disbanded, the crew of CAPITAN PELIGRO, MONO, and YARA must reunite for what may be their final ride!

The cult comic that electrified comic readers in the brain RETURNS to blast your fragile human psyche into oblivion!! 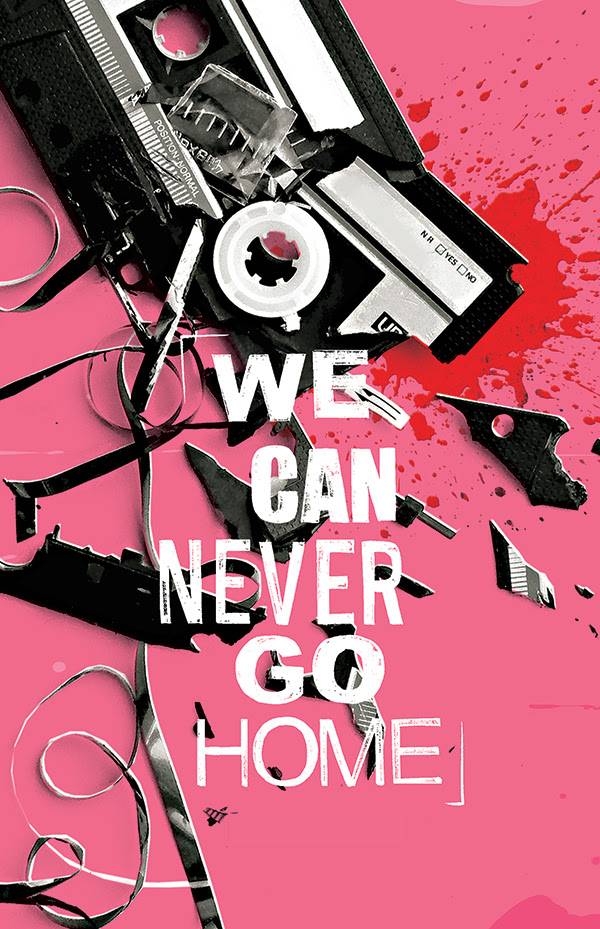 The dream team behind 2015 breakout hit We Can Never Go Home (winner of Diamond Comics Gem Award for Best Indie Graphic Novel of 2015) are back.

17 year old misfit Morgan was lost. Unsure if she imagined the teenagers with strange abilities who were involved in the death of her boyfriend or not, Morgan was worried she was losing her mind. She fell in with a rough crowd, developed some bad habits, and did whatever she could to try and forget the things she thought she saw. But when she runs into a very lonely and disturbed girl named Dania, everything changes. Like those teenagers from her past, Dania can do things other people can’t. Dania will be Morgan’s ticket out of their small town and into a bigger world… whether she wants to be or not.