“Marten Reed is your typical downtrodden twenty-something, facing the grim prospect of a dreary, unfulfilling life his college education left him ill-prepared to handle. But with the help of his little robot friend Pintsize and a mysterious girl named Faye, his life is about to get a lot more interesting…sort of.”

That’s the description on the back cover of the first collected volume of Questionable Content. On its face, QC is a ‘slice-of-life’ strip that follows regular people as they live their lives. But, just like real life, it’s about so much more.

Questionable Content was one of the very first webcomics that sparked my love of the genre and consistently continues to deliver entertainment while improving upon itself. This comic is relatively well known in the webcomics world and already has a deep archive (10 years this year). This deep archive may be daunting to new readers, as there really aren’t natural jumping-on points aide from the beginning. That being said, this strip is rewarding enough if you pick it up from the beginning to make the effort totally worth it. QC’s story is told mostly from the perspective of Marten, especially at first, but then grows to feature the various perspectives of the expanding cast in an organic way that advances the narrative. Typically ‘slice-of-life’ style strips are realism-based, but Jacques turns that a bit on its head, imagining a world where A.I.s live alongside humans, which brings a bit of a sci-fi tinge to the world.

What I like best about QC is that you can see Jacques truly cares about the characters and writes an extremely compelling story for them. The characters are believable and relatable while simultaneously being ridiculous and hilarious. Jacques also uses humor and dialogue to explore some pretty heavy themes like love and relationships, family, the nature of artificial intelligence, personal identity, gender, and mental illness/disorders all while never being insulting and always treating the characters (and the readers) with dignity. His writing can be highly referential, but not off-putting. You don’t to know who every band is (I certainly didn’t) and eventually it gets to a point where its just poking fun at musical hipsters anyway.  Bonus points for multiple Dune references and for the Yelling Bird (Jeph’s recurring filler piece  who is just simply The Worst, and kind of my favorite).

One of the coolest things to me about webcomics, and this strip in particular, is getting to watch the art from a single artist evolve over the course of years. The early art looks almost nothing like the current strip, but it evolves along with the story and continuity. Take a look at the evolution of Marten’s look over the years (above). Jacques is always pushing himself to improve and experimenting with new looks and ideas. Just recently with strip 2600, he began experimenting with changing the layout from his normal strip setup to the more traditional standard page layout.  Jacques draws a variety of different body types and each character is supremely unique, meaning the strip never gets boring or repetitive, even after a decade. Every so often I start over in the QC archives and read the whole thing from the beginning, just to watch how everything progresses.

If you like the idea of watching a lovable doofus find his way in life, watching friendships evolve, or just seeing to a tiny robot making dirty jokes, do yourself a favor and start reading Questionable Content here: http://questionablecontent.net/view.php?comic=1 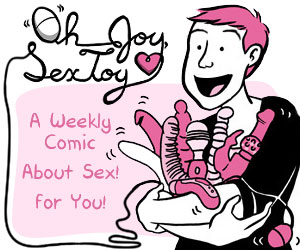