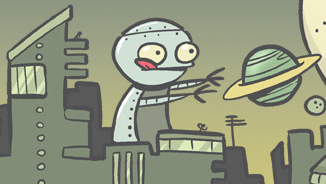 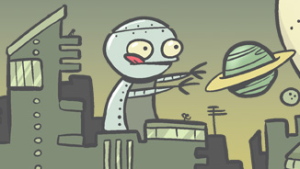 A daily comic about what it’s like to live in a multiverse. Each day, Monday through Friday, we’ll visit another location somewhere in an ordinary, everyday multiverse and see how folks there live and play.

The idea of there being multiple universes with a infinite number of possibilities has been touched on in comic books. However, most often its just subtle variations of the same people and places. 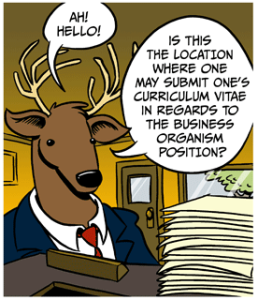 Scenes from a Multiverse throws those ideas out the window and explores a never ending point of views of possibilities. SFAM is a smart, witty strip that requires no previous reading or continuity on any given day, with all subjects up for grabs or in the center of the bulls-eye. From science and religion, computers, to relationships and family, nothing is sacred to be pummeled into satiric reference, commentary or turned into amusing chuckles.

Rosenberg makes each strip that is released set in a different universe or world. The beings can be alien like creatures, cephalopods, humanoids, or even talking proteins. However, their adventures, conversations and desires are all human-nature. By putting placing human experiences like children asking parents unsettling questions, debating over favorite movies, or having trouble getting up with your significant other Rosenberg has created a safe space to poke fun at our insecurities.

On top of these over the top and colorful characters, readers can be comfortable with knowing that they can check in on the serial and know they are not missing any larger continuity or have to read each panel in order.