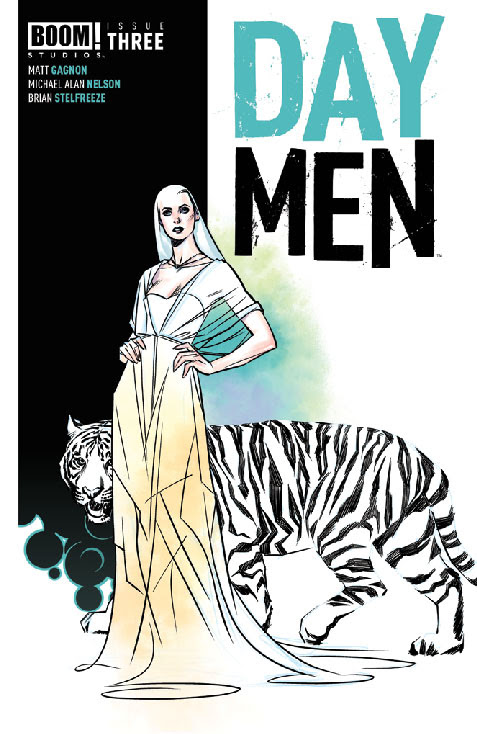 BOOM! Studios has announced a second printing for the sold out Day Men #3. 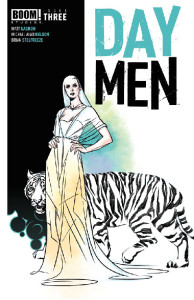 March 26, 2014 (Los Angeles, CA) BOOM! Studios is pleased to announce that DAY MEN #3, the critically acclaimed vampire noir series from writers Matt Gagnon (FREELANCERS) and Michael Alan Nelson (SUPERGIRL, HEXED) and featuring Brian Stelfreeze’s (WEDNESDAY COMICS) first sequential storytelling work since 2005, has sold out at the distributor level. This follows the trend of the first two issues selling out, and the publisher has rushed to a second printing for issue #3.

Comic book fans should bear in mind that first printings of DAY MEN #3 may still be found at the local comic shop nearest you. Not sure where to find your nearest comic retailer? Use comicshoplocator.com or findacomicshop.com to find one!

“Selling out of the first three issues of DAY MEN in a row almost feels surreal,” said DAY MEN co-writer and BOOM! Studios Editor-in-Chief Matt Gagnon. “On behalf of Michael, Brian, and myself, we can’t thank retailers and fans enough for supporting our book. This has been such an amazing experience, and there’s a lot more to come!”

For thousands of years, the world has been controlled by the “50 Families”—a secret network of vampire covens engaged in a timeless struggle for power. But when the sun rises, the vampires are forced to employ the services of a human who acts as their daytime fixer and protector. Trained for centuries to be the mortal soldiers of their vampire employers, the Day Men go forth at sunrise, alone into the world, to do the bidding of their sleeping benefactors.
In issue #3, war continues to rage throughout the vampire underground, as David’s role for the Virgo family comes into question. But will Azalea, the mysterious matriarch, cast David out in search of a more proper wartime Day Man?

“With Draculas and Lestats in the world, it’s refreshing to get a new viewpoint on the vampire mythos. Day Men delivers on that promise and this particular issue delivers on itself.” – Geeked Out Nation

“If you’re into a rich, alternate vampire story, Matt Gagnon & Michael Alan Nelson serve up a meaty one you can really sink your teeth into!” – Word of the Nerd

DAY MEN #3 second print ships with a new cover by Brian Stelfreeze and carries a retail price of $3.99. It is anticipated to be in stores on 4/23.