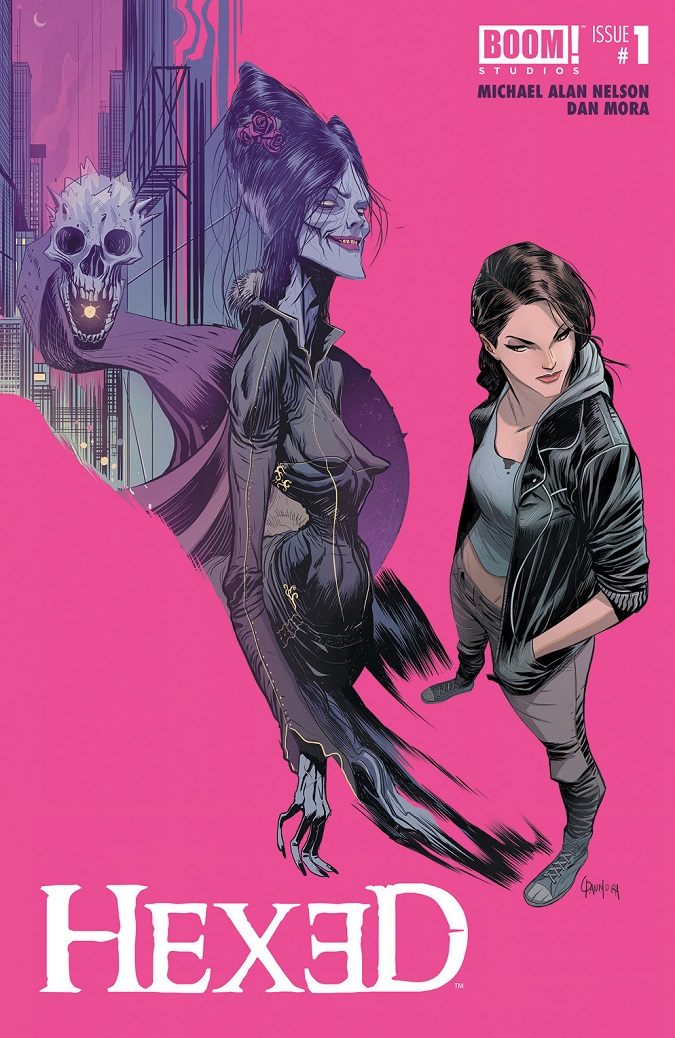 September 8, 2014 – Los Angeles, CA – Award-winning publisher BOOM! Studios is pleased to announce that the new ongoing series Hexed from Michael Alan Nelson (Day Men) and new series artist Dan Mora has sold out at the distributor level. The publisher has rushed to a second printing.

Comic book fans should bear in mind that first printings of Hexed #1 may still be found at the local comic shop nearest you. Not sure where to find your nearest comic retailer? Use comicshoplocator.com or findacomicshop.com to find one!

“I’ve said it before, I’ll say it again: Hexed is one of my favorite titles we’ve ever published,” said BOOM! Studios Editor-in-Chief Matt Gagnon. “This second print has all of us very happy and incredibly thankful. Diving back into Luci’s story with Mike, and the astonishingly talented Dan Mora, has been everything we hoped it would be. And having Emma Rios return to provide the stunning covers was the icing on the cake.”

Luci Jennifer Inacio Das Neves, better known as “Lucifer,” first appeared in Fall of Cthulhu Vol. 3: The Gray Man and the 2008 Hexed limited series and is a quick-witted mash-up of Buffy the Vampire Slayer and Lara Croft. This new series dives back into the depths of the Aether with the supernatural thief-for-hire as she takes on the dark denizens of the netherworld in search of wondrous objects for her mentor/mother figure, Val Brisendine. In addition, artist Emma Rios (Pretty Deadly, Strange), who debuted in American comics on the first Hexed series, returns to illustrate covers.

“…Nelson and Mora tell a solid story with a nice hook of an ending.” – Comic Book Resources

“The art and coloring are incredible, vibrant, and a joy the whole way through. I had a blast reading it and have faith that this one’s going to become a real winner.” – Major Spoilers

“…intriguing, messing with your expectations at every turn, and I for one’ll be picking up next month’s issue to find out where it goes.” – Big Comic Page

“Hexed made me long for answers. yet kept me happily titillated. Don’t avoid this hex. Hail Lucifer!” – Watch Play Read
The Hexed #1 second print ships with a new cover by Dan Mora and carries a retail price of $3.99 with a Diamond Code of JUL148468. The final order cutoff date for retailers is September 15th and will go on sale in stores on October 1st.