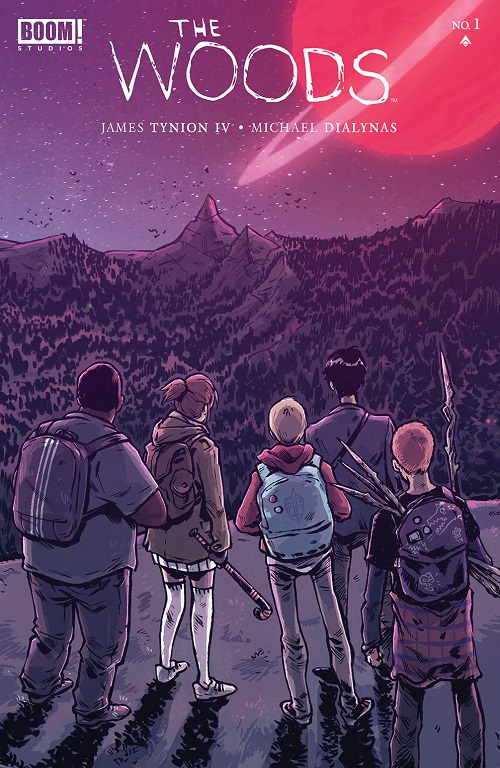 BOOM! Studios is sending The Woods #1 back to print. 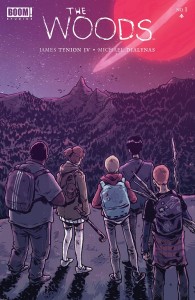 May 12, 2014 – Los Angeles, CA – BOOM! Studios is excited to announce that the thrilling first issue of THE WOODS, the otherworldly mystery from writer James Tynion IV (Batman Eternal, Red Hood and the Outlaws) and artist Michael Dialynas (Amala’s Blade), has sold out at the distributor level on the day of its release. The publisher has rushed to a second printing.

“We knew we had something special on our hands when James first pitched us THE WOODS, but all of the praise we’ve received so far for the first issue has just been astonishing,” said BOOM! Studios Editor-In-Chief Matt Gagnon. “Whether it’s longtime comic fans, industry professionals, or brand-new readers, we’ve loved seeing this series reach a wide and diverse readership. That in and of itself is one of our missions as a company: reaching people from all walks of life and disparate interests and having them united by a powerful story. We need more new stories in comics that expand our audience. THE WOODS has that potential and we’re very proud of it.”

Comic book fans should bear in mind that first printings of THE WOODS #1 may still be found at the local comic shop nearest you. Not sure where to find your nearest comic retailer? Use comicshoplocator.com or findacomicshop.com to find one!

In THE WOODS, on October 16, 2013, 437 students, 52 teachers, and 24 additional staff from Bay Point Preparatory High School in suburban Milwaukee, WI vanished without a trace. Countless light years away, far outside the bounds of the charted universe, 513 people find themselves in the middle of an ancient, primordial wilderness. Where are they? Why are they there? The answers will prove stranger than anyone could possibly imagine.

James Tynion IV honed his writing craft by working with one of the best writers in comics, Batman scribe Scott Snyder. Tynion’s work in the Batman universe (Batman Eternal, Red Hood and the Outlaws, Talon) and on his Thrillbent comic, The Eighth Seal, made us eager to publish his first original comic series for print. THE WOODS gives us that same eerie, small-town horror feel we get whenever we read a Stephen King novel. If you’re a fan of teen conspiracy comics like Sheltered and Revival, you’ll immediately be sucked into THE WOODS.

Praise for THE WOODS #1:

“THE WOODS #1 is a solid read that goes from humorous to horrific at breakneck pace.” – Comic Book Resources

“The setup was fantastic—we get to meet nearly every person mentioned in BOOM!’s teasers, a solid setup, and the action kicks into gear fast. There’s no sacrifices here – there’s content and substance, and the end of the issue left me waiting for more. ” – What’cha Reading?

“By the end of this first issue, you’ll be behind these characters like they’re friends of your own.” – Newsarama

“THE WOODS is a fresh jolt of fun storytelling that gets right to the meat and delivers good, old fashioned horror and suspense. ” – Rhymes With Geek

“Giving audiences a fresh story and a strong issue #1 is pretty difficult, but Tynion creates his world, moves you through it, and then pushes you head first into the story and I, for one, am all for it.” – Coming Up Comics

THE WOODS #1 second print ships with a new cover by Michael Dialynas under Diamond Order Code APR148002 and carries a retail price of $3.99. It is anticipated to be on sale June 4th, the same day issue #2 is set to debut!