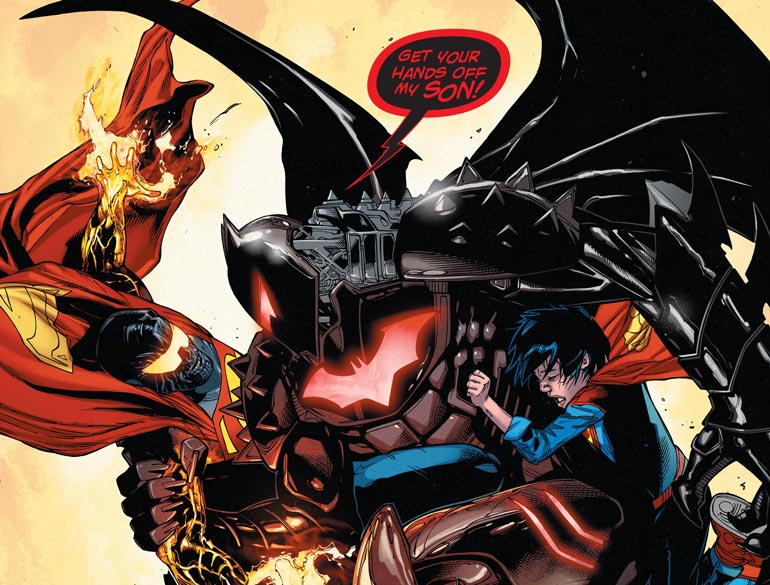 While Beowulf might not be one of the most beloved texts in the Western world (due largely to the fact that few are going to appreciate things forced on them in high school), there is one element that always struck me as being interesting about the story: man, Grendel’s mom sure loved her kid. 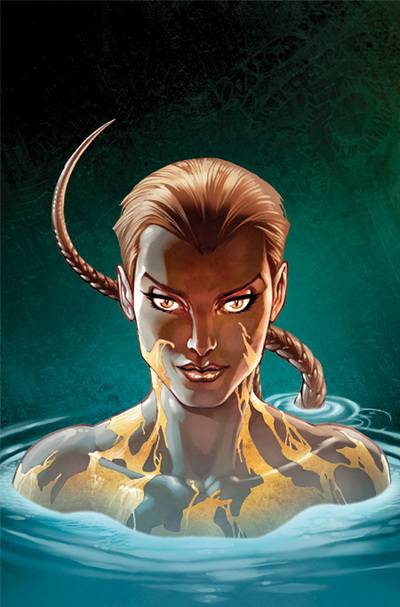 For those who never read the story, the epic of Beowulf focuses on a super-strong, almost Superman-esque warrior, the titular hero, who arrives in Heorot to defend its people and its King from a monster. The monster, a troll-like, malformed creature named Grendel, creeps into Heorot at night to kill and eat members of the great hall.

Some aspects of the story indicate that the mere existence of human happiness is what has driven the beast to hate humanity, but the main idea is that Grendel is a monster and Beowulf is a man. When these two things meet, one must battle the other until there is a victor.

Outside of other issues that pepper English courses when talking about Beowulf, I have always been surprised that the second monster in the story, Grendel’s mother, sort of gets a tad shortchanged in terms of analysis and exploration. This is probably because there is little about her to really dig into, but there is something repeatedly intriguing in old epics about heroes who travel deep into the world, as Beowulf does, to confront a female, motherly monster who has children which are a plague to mankind.

So, what does the love of a monstrous mother for her troll-child have to do with comics? While I greatly appreciate the fact that we, as readers in an individual sense and as a group, can spot “tropes” and “archetypes,” I am also pleased when we can see then subverted. I enjoy asking what the subversion or “twist” means, even if I am never able to come to a completely solid answer.

One of the twists I enjoy most is how, in certain stories, it is mothers who take Beowulf’s place as the hero in a story. I am not saying that many, many male heroes haven’t been shown defending their children from monstrous threats. Rather that, as a whole, mothers filling this role tend to be part of a smaller number, yet they appear in some fantastic stories. Stories I want to talk about. Stories I hope you’ll read and watch. 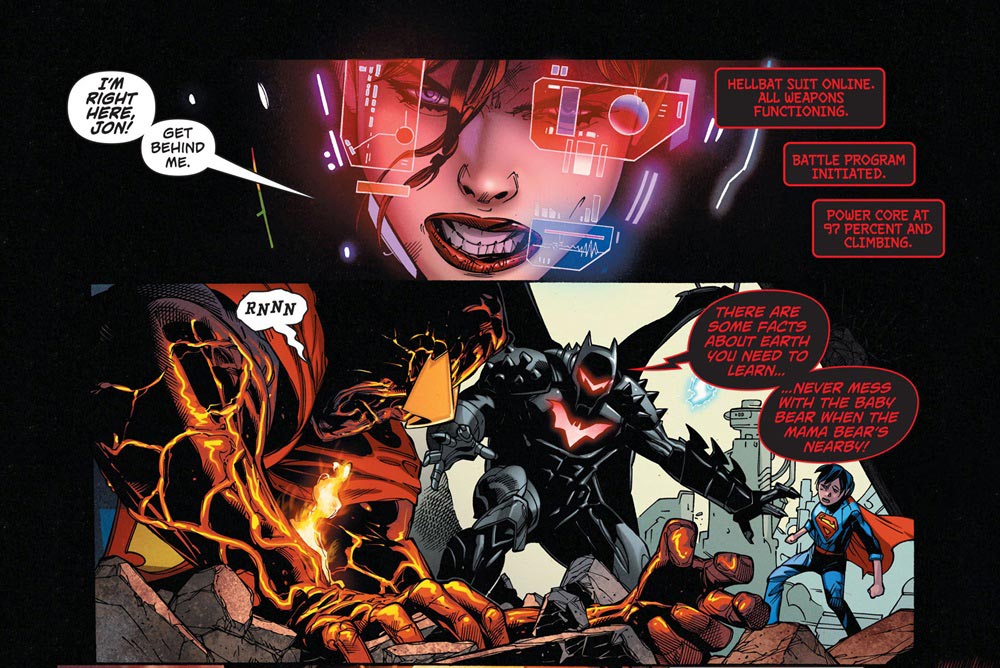 So, has anyone been reading the Superman Rebirth title written by Peter Tomasi and Patrick Gleason? Here is a comic that manages to encapsulate both the “archetype” of Beowulf, as well as what I am going to call the “Ripley Twist” effect.

By the time the story reaches issue #5, Superman (one who is from the pre-Flashpoint DC Universe, yet has been living in the New 52 Universe with Lois and his son) has found that Eradicator, yellow visor and all, is out to destroy him. Worse, Eradicator is out to consume him and he has the souls of Krypton trapped in him as well. Eradicator is as much a ghost and a machine, a kind of sentient, A.I. wraith … and he wants to end Superman’s life and absorb his essence.

In a few ways, this archetype mirrors the kind of threat that Grendel presented to Beowulf and it is one of the common “monster” themes: something, something not human, something empowered by non-positive/religious elements, preys on us and longs to not just kill us, but to consume and violate us.

To the people of Heorot, Grendel was not just “some monster,” it was something that was eating and defiling the dead. Eradicator is a great foe for Superman since both are able to combat the other on equal terms, like how Beowulf was able to combat Grendel. Unlike in Beowulf, Superman #5 shows (for a moment, anyway) where the hero falls. Eradicator consumes Superman and absorbs him into his ghostly, fiery matrix. 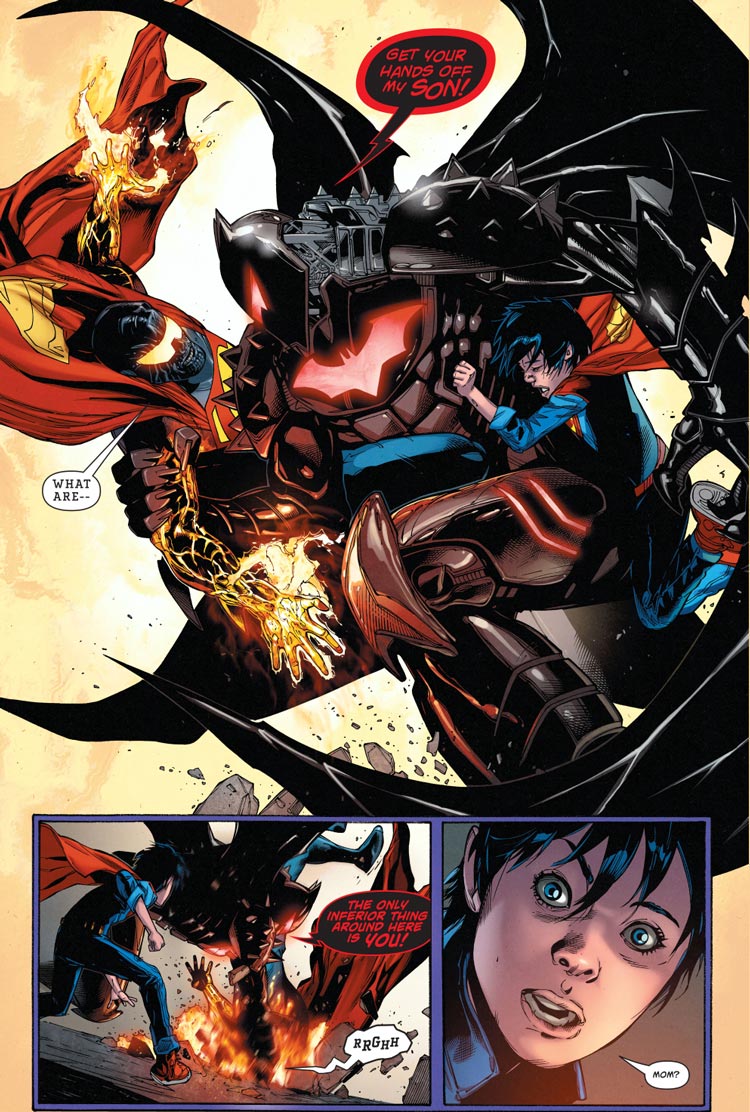 Well. This sort of upsets the “Archetype Applecart,” as I said, for a moment anyway. This moment proves to be great because it forces readers to come to a kind of post-modern understanding of what heroism is.

In older tales, even Beowulf, sure … the hero can die … but the story always focused, largely, on the exploits of his life. We receive Beowulf as a narrative about how this warrior-king lived, how he defended his people, and how although he does die (to a dragon, no less), his saga remains in song even if his people are gone.

Superman certainly isn’t the kind of character you kill and leave dead, whereas Beowulf is, so he is already a different kind of narrative device, but so what matters then when you do kill him? Eradicator’s “devouring” of Superman creates a heroic vacuum which then means that Lois and her son, Jon, are suddenly in a lot of trouble.

Oh, and did I mention they are on the moon? In Batman’s lunar base? Well, turns out they are and things are getting intense. Despite Jon’s abilities as a half-Kyrptonian, he can’t very well fight Eradicator on his own.

Hence the arrival of the “Ripley Twist.”

In case you’ve never been able to see one of the greatest movies of all time, Aliens, the sequel to Alien, focuses on Sigourney Weaver protecting a young girl named Newt from the titular alien threats. By the film’s end, Ripley has crept into the dark depths of an alien den and rescued Newt, only to find both them are pursued by the biggest, meanest alien of the series.

Ripley then dons a power-loading armor and, after sporting the best one-liner in the film (“Get away from her, you bitch!”) she proceeds to kick some ass. The fact Ripley dons the awesome power armor and kicks the monster’s ass is what I think about I think a “Ripley Twist,” it is a moment where a societal norm is subverted for a positive moment of pleasure as well as for narrative sense.

Having one of the other characters in Aliens come in to save the days makes no sense, so Ripley suit’n up and kick’n ass proves the most logical. Her motherly care for Newt empowers her to take on a massive alien in a way that, for film, certainly culminates in the best fight of the show’s runtime.

Enter Lois Lane, the average, only-human mother now trapped on the moon with Eradicator. Fortunately, since they are in Batman’s base, she does what any good mother would do and climbs into the nearest suit of Bat power armor and proceeds to kick the snot out of Eradicator. What is really cool about the armor stolen is that it was the kind used by Batman when he stormed Apokolips to rescue Damien, his son.

The armor by now certainly has a parental element to it and Lois uses it to great, pardon the pub, impact. She manages to deliver a few great blows to Eradicator while, from within Eradicator, Superman manages to escape his imprisonment.

Like it has been said, Superman isn’t the kind of character you leave dead even after you kill him.

Lois and her brief conflict with Eradicator is important because it shows her capacities for heroics. While it might seem improbable as to “how” she piloted the bat-suit, it is thematic and fits an archetype, that of the defending parent hero, even while subverting it. Lois scores the best moment so far in Superman’s comic. Still, alas, her role was not meant to headline but to buy time and, as the end of the comic shows, Superman comes back to challenge Eradicator once more.

But what about Grendel’s mother? In the same way I was stuck by how she loved her creepy, awful child and wanted revenge on Beowulf after he killed him, Eradicator is an interesting villain to look at. The character first appeared as a Superman foe back in 1993, although he existed as a pre-Superman character going back to 1989.

Existing as an energy-being who takes on various robotic and semi-humanoid forms, Eradicator takes the form of Superman after the hero’s famous 90s death, briefly believing he *is* Superman. Obviously, things soon go south and Eradicator becomes an on-again/off-again enemy and partner to Superman.

The cool thing about Eradicator and Grendel’s mother is that, somewhere in their non-human essences, we understand human traits within them. Eradicator is a lost entity, one who desires belonging even if he can’t actually ever be the Superman he imitates. Grendel’s mother, while obviously being a creature of immense cruelty and darkness, loves her child and wants revenge on the man who killed him. Monsters perhaps work best when they are enemies for humans to fight, but the fight has to mean something in the process.

For Beowulf, the monsters show how a human (albeit a really, really superhuman one) overcame struggles to become a leader for his people and that he expanded civilization where he went. For Superman, and for Lois, the fight with Eradicator is awesome because it allows both of them to capitalize on what the Rebirth DC branding is marketing them best as: parents, possibly the strongest kind of superhero. 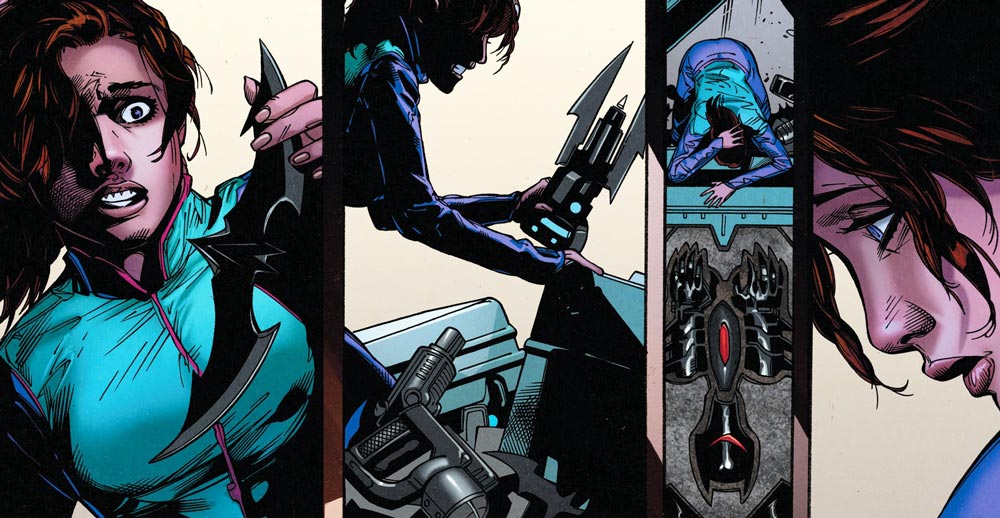 While Ripley and Lois might not be part of the same shared universe, I have to think that Superman #5 was dedicated to that spirit, to that moment when audiences watched a woman beat the life out of an impossibly dangerous monster to protect her kid. Lois was given a great chance to shine alongside her super-husband and I hope she, and other DC women, get many, many more changes to kick some ass in the future.