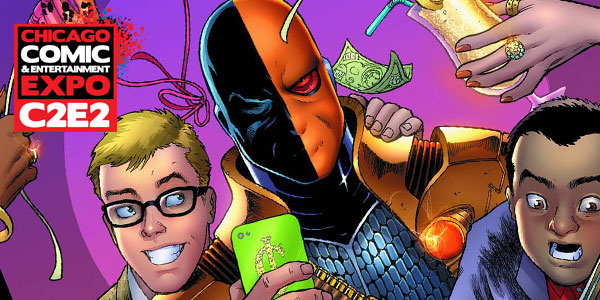 In the final interview conducted at 2013’s C2E2 in Chicago, I spoke with creators Art Baltazar and Franco Aureliani, famed writer/artists on such books as Tiny Titans, Superman Family Adventures, and their newest all-ages launch Aw Yeah Comics! But the guys are putting down their pencils for once, to launch a new book for DC Comics’ main New 52 publishing line this May — The Green Team! Teen trillionaires dead set on buying super-powers for the good of mankind, the Green Team was a very short-lived concept from the DC vaults, and no one could breathe life (and humor) into the group like Art and Franco can! 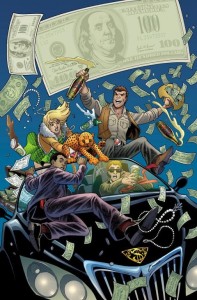 Matt Santori: Congratulations on the new series, gentlemen, and on joining the ever-swelling ranks of new writers to DC’s New 52! What drew you to a book in DC’s New 52 after so many years writing and drawing for their DC Kids/Johnny DC line?

Franco Aureliani: Then it happened to be The Green Team. We were like, so, all of them are on the team? And he said no. (laughs)

AB: So it’s a DC Super Pets special with Ignatius the Lizard? No, no, no.

MSG: The Green Team is quite possibly one of the most obscure set of characters from DC. What was it about the concept of teen trillionaires that personally spoke to you?

FA: Ha! Absolutely nothing! They have a lot more money than we do!

AB: It opens the door for any kind of adventure you want. They can do anything they want because they have the money. To them, money is not like how we think of money. To them, it’s just a resource. You say, “Hey, I want to buy a rocketship! Alright! I’ll have it here in an hour. I paid for express delivery.” You know, that kind of thing.

FA: You have all that money and everything in the world you want. What is it that you don’t have or is harder to get? That’s what we’re exploring with them. They have resources to fund and do different things, but to get to their ultimate goal, Commodore is looking to buy super-powers. And how do you go about doing that? You have all this money, but how do you go about that in the DC Universe?

AB: We grew up reading stuff like George Perez’s New Teen Titans and New Mutants. That’s kind of the vibe here. Teen books, guys that have problems internally — we’re writing what we know and making it awesome! 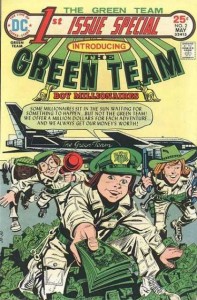 MSG: One of the things the New 52 has focused on quite a bit this last year is adding brand new characters to the mythos. What can you tell us about your upcoming cast and the process you went through in developing them?

AB: We read the First Issue Special from the old, seventies version, and I wanted to tell them, “No, I don’t want to write this. This is awful.” So, when Dan said we could change it, we kept a lot of the names, but…

FA: They’re all based on the older characters. Commodore, J.P. — we changed the gender from Cecil Sunbeam to Cecilia Sunbeam. We didn’t think anyone would believe the twelve year-old mega-director in Hollywood, so we made her a child star. But everyone else is pretty much the same. We added a new character. The only one that we really changed dramatically is Mohammed. We made him a prince. He comes into the team and that’s how you see the first issue is his introduction to the rest of the group, the other three.

AB: When we got it together, we had all these distinct characters and kind of based them on actors. I don’t know if I want to reveal who the actors are. Maybe see if you can tell when you read it. But one of them is Justin Timberlake. (laughs) Personalities and look. You want to pick a guy who’s cool and a girl who’s cool, and the guy who’s a different kind of cool, and the young kid that wants to be cool like the rest. It helped with the writing to develop the characters’ minds. 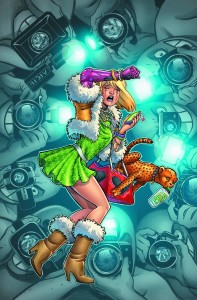 MSG: So, I don’t think it’s a stretch to assume the book is going to be funny with you guys writing it. There’s been a lot of talk about how books that are funny or lighter in tone have a tougher time breaking into the market. Why do you think that is, if you agree that to be the case?

FA: Well, the first issue does not have a lot of humor in it, honestly. We’re doing a lot of set-up in the first issue. The humor is not going to be coming out of their mouths. They’re not going to be superheroes, wisecracking as they are punching somebody in the face. There will be situations that will come up because of their inexperience in all of this stuff. They’re going to be getting involved with characters in the DC Universe that they’ve never met before. So, the situations that arise from that are going to be humorous. In issue #2, you’re going to see the introduction of something that you’re not going to see coming. When it happens, you’ll say, “Oh! That makes sense! This character would do that, if he was a trillionaire. Because he can.”

And I’m sure you’ve seen the cover for #3, which brings in Deathstroke. That’s somebody these guys can afford to pay.

AB: Yeah, he’s on that cover for the money. All the way. He wouldn’t be involved with these guys, but they’re trillionaires, so he is. 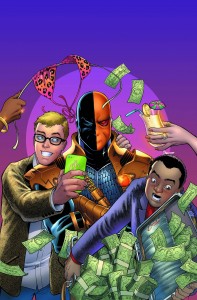 MSG: It seems pretty inevitable any group of kids, no matter how rich, are going to be viewed skeptically by heroes and villains alike in the DC Universe. What kind of opposition will The Green Team be facing in the near future?

FA: The idea is if someone who has that much money, you’d naturally know about them. But what brings them face-to-face eventually is the kids’ actions in the first few issues that will bring in all these other people.

AB: There’s probably trillionaires out there right now that aren’t making the news. These kids are making the news all the time. People are aware of them, asking things like, “Where did they get those wonderful toys?” (laughs)

MSG: How has your collaboration with artist Ig Guera been structured? Are you guys working on designs together, or stepping back and letting him run with the art side of the series?

FA: When we were coming up with the characters, we drew out all of them and what they would wear. You’re going to see this armor show up in the first issue. We did the designs and all that, but we drew them all cartoony. Then we sent them to Ig and they came back, like, real. (laughs) We were like, “Oh man, these are cool!” And he said, “Well, I based them on your designs.” Oh yeah, that’s right!

So, it’s been pretty cool! We’ve seen his work before and we’ve seen his stuff from Blue Beetle, but honestly, I think this is his best work. It’s really really good. 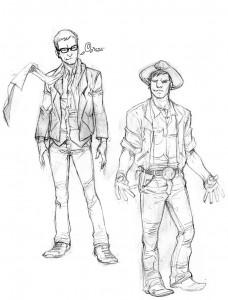 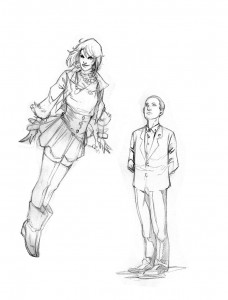 AB: Yeah! He’s really good with faces. I’m amazed that each characters look like themselves. He doesn’t just draw all man-faces the same. They’re all different guys.

I’m still blown away with what he did with our little Tiny Titans-esque designs for the book. I don’t even think I drew noses on half the guys. And he’s just so good. He blows us away every day. I look forward to his emails and seeing the pages. I even look at them out of order. They’re so good, I don’t even care. Whatever opens first, I’m looking at it!

AB: Give the first one a shot. It’s a lot of set-up, but once you get to issue #2, 3 and 4, it’s going to roller coaster. You’ll end every issue with “Wow! They’re letting these guys do this?”

That’s how we want every issue to end with “Man, what did I just read?” We want to leave off with each issue so you want the next one. That’s the goal.

The Green Team arrives in comic shops from DC Comics, joining the line-up of the New 52, on May 22, 2013. And if you happen to be visiting Chicago near Skokie, Illinois, be sure to stop in at Art and Franco’s own comic shop Aw Yeah Comics! Aw yeah!