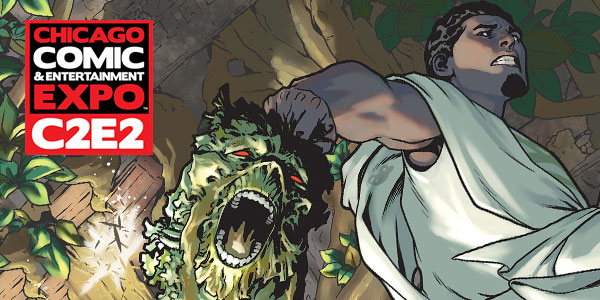 Charles Soule is a man of many books. Juggling genres for DC, Marvel, and Oni Press like they were steak knives, the writer has what is probably his most “out there” title in DC Comics’ Swamp Thing. Comicosity sat down with Soule at this year’s C2E2 to get a sense of where Alec Holland is without the Parliament of Trees, what kingdoms may be joining the Green very soon, and just what his master plan for the run really is. 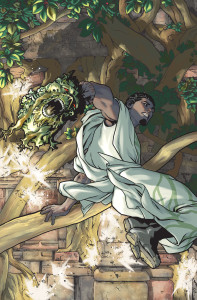 Matt Santori: Thanks for taking time out of your really busy schedule to talk Swamp Thing, Charles! With the destruction of the Parliament of Trees at Alec’s hands, Swamp Thing is now off on his own for the first time — ever. Why was it important to you to set the character free of that connection?

Charles Soule: As I think will hopefully become more clear as the entirety of my Swamp Thing run comes out, I wanted the first arc — the Seeder and Parliament story — to be dealing with the past. Not only for Alec Holland, but also for me as a writer writing Swamp Thing and dealing with all of the amazing writers who have done it in the past. The idea of Alec breaking free of all of his advisors and people who might be weighing on his mind was symbolic of me moving forward into my space on the book.

That’s kind of why I did it. I also think it’s more fun when characters don’t have help, and they’re out on their own. They’re making mistakes, and that’s where good drama comes from. That’s what I wanted to do with Alec Holland and I think it’s been pretty cool so far.

MSG: Not every member of the Parliament is gone, however, as Alec spared Wolf, Jonah, and the Lady Weeds, but in human form once again. What kind of adjustment is that for the three and will we see any connection to the Green return?

CS: That is something they all are very focused on. The second chunk of my run is dealing with the present, and defining yourself in your own way — living in the moment and figuring out how to tell your own stories.

Alec Holland has pulled these three people out of the Green, and given them all a fresh start. They are all able to write their own stories. How they approach it, and whether they’re willing to take that leap, is the story that I’m telling. 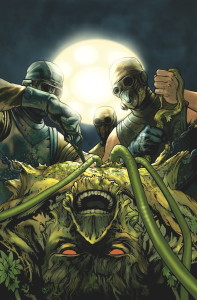 It also has lots of sweet action! It’s not just this heavy meta-thing, but that’s what I’m doing with each of those three characters — how they approach this second chance and new leaf, so to speak. (laughs)

MSG: Capucine brought up a really interesting point a few issues ago, in that Alec is still a scientist, Swamp Thing or not. Is this a thread you plan on exploring and what type of science would a creature devoted to the earth be focused upon?

CS: The thing that’s interesting — something that was in my initial pitch for Swamp Thing — is that Alec Holland spent most of his adult and academic life studying the plant world, trying to learn more about it and unlock its secrets. But now, all of those secrets have been given to him. He can find out anything he wants about any plant instantly, just by thinking about it. So, his whole academic focus is just moot.

It’s interesting to think about ways he can use that acumen to take things to the next level. He doesn’t need to find out secrets anymore; now, it’s about how he’s going to use them. That’s something that I’m going to be playing with, particularly in the next arc, which will be focused on the future.

MSG: Speaking of the future, we’ve just seen some teases in solicitations about Swamp Thing’s involvement in Futures End: a few new kingdoms joining the Green, the Red, and the Rot. What can you tell us about that development, leading into September?

CS: In my conception of Swamp Thing’s world, and the DC Universe in general, an avatar appears when a biological grouping becomes numerous enough to gain self-awareness and sentience. At that point, an avatar is almost “generated” to interact with the other sentient kingdoms, like animals or whatever.

Basically, in the next big arc of Swamp Thing — which ties into Futures End in a way — we see that the singularity has happened, and machines have gotten to the point where they need an avatar. How that plays out and interacts with the other kingdoms, who it is and why, and how Swamp Thing deals with it, is the story we’re going to be looking at. And I cannot wait for you guys to see it, because it’s pretty cool! 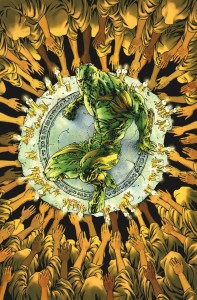 MSG: Back to the current story, the Sureen obviously had ulterior motives, and its ability to trick Swamp Thing underlines Alec’s somewhat naive perspective now that the Parliament has been removed. Is this a reflection of his continuing struggle with his human core or simply that of inexperience, in your mind?

CS: I think it’s inexperience as an avatar. That’s what I was trying to convey there. He hasn’t been doing the job for very long. If you look at the timeline, during Scott Snyder’s amazing run, he wasn’t Swamp Thing for even all of that. Alec turned into Swamp Thing in issue #7. And the rest of that arc was a fairly condensed amount of time. I figure he’s been the Swamp Thing for under a year in total.

So, there’s a lot he doesn’t know, even with the Parliament there to advise him, who he then promptly destroyed. He’s out in the wind a little bit, and he’s going to make mistakes based on lack of knowledge. And again, I think that makes for excellent drama.

MSG: Shifting gears a little, it’s always amazing to me to see the same writer handling such drastically different genre material at the same time. From Red Lanterns to Superman/Wonder Woman to She-Hulk and more, none of your books are alike. Is that a method for keeping your creative vision sharp?

CS: That’s a great question, because part of it is me choosing projects that are that way, purposely. I want to make sure that I’m not going to the same well for the different books. Red Lanterns could not be more different than Swamp Thing. Swamp Thing is more my dark, mythological fantasy book, while Red Lanterns is my in-your-face, angry biker gang book. Because they use different parts of my creative space, I don’t have to worry about them overlapping. I don’t have to worry about stealing plot points. You still have to be a little careful, but I try to make sure all the projects that I’m working on allow me to do that. I think so far it’s worked out alright. 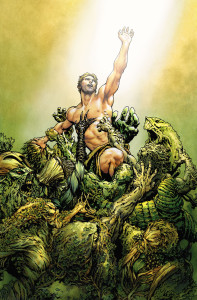 MSG: How do you find balance when you take this much work on? You do an enormous amount of writing, plus your career as a full-time lawyer, plus I hear you’re in a band.

CS: The way it’s balanced is that it’s all solidly blocked up with work. I don’t have to worry about being balanced because everything is the same all the time. Whenever I finish something, I’m moving onto the next thing almost immediately. Which you may may think sounds like kind of a drag, but the truth is, who wouldn’t want to be writing these amazing projects and having these opportunities to tell amazing stories with these characters.

It’s a lot of work. It certainly can feel a little grueling at times, but it’s a dream come true. Who am I to complain?

CS: The next issue of Swamp Thing, which is #31, wraps up the whole Sureen storyline. At the end of the last issue, we saw Mickey, our new character, having these weird tendrils coming out of her face, just after she makes out with Swamp Thing. Which is weird. But good. And typical for that book. We’ll find out who she is and what her deal is. We’ll also have a major new antagonist introduced in this next issue.

The title of the issue is “Mycosis,” which will give you a clue to who she is if you look it up. Or maybe you just know it. I don’t want to assume. Maybe we all just know what that means.

It’s great, man! There’s a lot of action in it. It’s very intense. Very creepy and weird. It’s a great Swamp Thing issue, what can I say?

And that issue of Swamp Thing, #31, is on the stands today! Don’t forget to grab it online or at your local comic book shop!