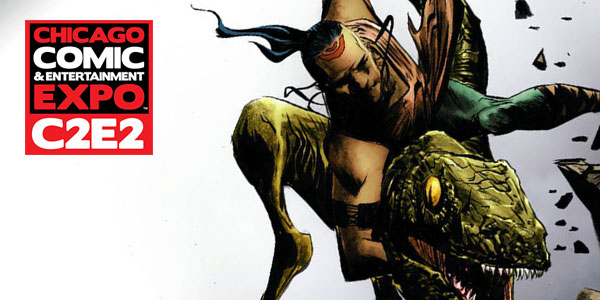 Dynamite Entertainment has recently been rolling out a whole new slate of revivals in its Gold Key line, starting with a reimagining of the classic Turok Dinosaur Hunter. Written by Greg Pak, Turok takes a brand new look at (and brings a brand new twist to) the Native American hero. Pak took time out of his very busy C2E2 to sit down with Comicosity and share a little bit about what drew him to the series and where it could be headed next! 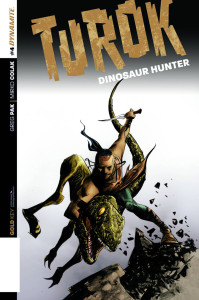 Matt Santori: Greg, thanks for taking time out of your con schedule to talk Turok! What drew you to the character initially?

Greg Pak: I knew of the character from when I was growing up. I didn’t read a lot of it. I had one or two issues, but I always thought it was a great concept.

Now as an adult, I got the call from the editor Nate Cosby, and he said “Turok. Native American fighting dinosaurs.” For anyone at any stage in their stage, “Native American fighting dinosaurs.” is just an awesome idea. It’s just a great, fun set-up and implies so many crazy things. Clearly, dinosaurs didn’t exist at the same time as people, so what kind of world are we living in? What’s going on?

But the huge thing for me is, how many times in my career am I going to get the call from someone who wants to pay me good American dollars to write a story with a Native American lead? You know what I mean? Diversity in storytelling and diversity in casting is really important to me, so I just could not say no. It’s probably a once-in-a-lifetime chance, and I took it.

Also, I had some fun ideas of what to do with it. The big, crazy twist — a little bit of a spoiler for those who haven’t read the series yet — is we find out the story is happening in the year 1210, and the dinosaurs have been brought to the Americas that Turok is grappling with by invading Crusaders. Setting it in that time period of 1210 opens up whole variety of crazy stories we can do around this alternate world.

MSG: Yeah, that really is the shocking moment — in a book full of dinosaurs — to have Europeans coming to the North American continent 300 some years early. Can you share a bit about the inspiration behind that move? 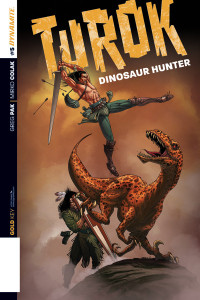 GP: I had realized that I’ve seen a lot of stories about Native Americans or Plains Indians set in the 19th century, as well as stories set around the arrival of Columbus and Jamestown in the 1600s. But there haven’t been a lot of stories told earlier than that, partly because we don’t have a lot of records from that time period. And of course, in real life, the Crusaders did not go to America.

But why not? Why not just pick a time that’s earlier and tell different types of stories. That’s what comics are great for. You can do crazy stuff, and it’s a really interesting time period. This is also the time that Genghis Khan was doing his crazy thing. In the next arc, Turok is going to come face-to-face with the daughter of Genghis Khan, who happens to be a skyriding advance scout coming from the west, riding a pterodactyl.

And a hint of what’s to come: this is also the same time as the legend of Robin Hood. So, who knows what could happen there? There’s lots of fun stuff we can do here.

MSG: The relationship between Turok and Andar is very different than the traditional one prior to this series. What narrative advantages do you find in the more adversarial relationship than the original brother bond?

GP: The idea is that at the beginning of the story, Turok is an exile from his tribe. His parents were accused of tribes and chased out, and he’s lived on the margins of this tribe. Also, his parents come from a different tribe originally.

Native American culture is not a monolithic thing. Native Americans come from thousands of different communities and tribes, and we seldom see that. I wanted to create a world where there are multiple communities. There’s a lot of good story to be gotten from starting your story off with a character who is an outsider.

Andar being a bully, who is an insider, is a fun way to set up the story and make us feel for our main character. It allows for some nice turnarounds and interesting character twists with Andar as the story progresses. It’s a great way to set up conflict at the beginning. 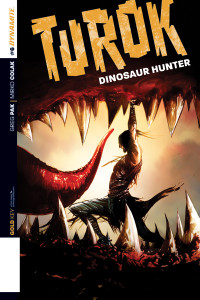 MSG: The presence of Marion among the tribe is a really fascinating contribution to understanding how much these two groups of adversaries really differ. What drove her personality and place in the story for you?

GP: Marion is the daughter of one of these Crusaders — the main Crusader, in fact, who is in charge of everything. One thing that I wanted to do is include women in the story. Sometimes it’s easy in outdoor adventure stories to fail to do that, which I think is a big mistake.

When you include Marion, you also get to look at the whole culture of the Crusaders from another angle. As a woman — a girl really — she’s in this position of privilege in relation to these Native Americans who are being hunted down and rounded up. At the same time, as the story progresses you get to see how her position in her own community is not so great. I think that’s worth doing.

It’s something I tried to do with Planet Hulk at Marvel as well. Every community — with good guys or bad guys — has levels within it. I think that’s always important to show. There’s no such thing as a group of monolithic bad guys, unless you’re talking about Nazis, right? You can put as many Nazis on screen as you want and kill them all day long and nobody cares. But on a human level, people who do the worst things actually think they’re doing the right thing. And in other parts of their lives, they can be incredibly loving and kind. Because people are totally screwed up and crazy. That’s the nature of humanity. We do these insanely horrible things and at the same time do these incredibly generous things. Showing a community with a lot of variety is a way to get at some of these subtleties.

Marion allows us to do all of that. And she’s also just a fun character to write. I like her because she’s really spoiled and entitled. She acts snobbily and badly, but at the same time, she has something else going on. She has clearly studied and worked with the dinosaurs more than other people. She knows about their habits, and she has some interesting information to share. She’s also not a monolithic character. She has a few different levels.

MSG: The Gold Key line seems very disparate in genre, but the underlying sense is that it all maps together in some way. How much coordination are you doing with the other writers in the line and have you seeded any connections fans should be watching out for?

GP: The answer is yes, and that’s as much as I can say. (laughs)

MSG: Fair enough! Any teases you can share for upcoming issues of Turok Dinosaur Hunter?

GP: Yes! Takeshi Miyazawa is drawing the next arc. He’s one of my favorite people. He drew the Code Monkey Save World project for me, and was the co-creator of Amadeus Cho over at Marvel. Our next arc will have Turok heading west, looking for the place that his parents came from. He’s never been there and its time to see what’s going on. Dinosaurs are loose, and it’s a dangerous world. What complicates things further is the arrival of the daughter of Genghis Khan, who happens to be an advance scout, coming astride a pterodactyl!

Dynamite Entertainment has fleshed out its Gold Key line of books with Magnus Robot Fighter, Doctor Spektor, and Solar Man of the Atom, but you can still grab the latest issue of Turok Dinosaur Hunter at your local comic shop and online. Issue #5 is set to hit stores this June! Meanwhile, Greg Pak is also the ongoing writer on Batman/Superman and Action Comics for DC Comics.