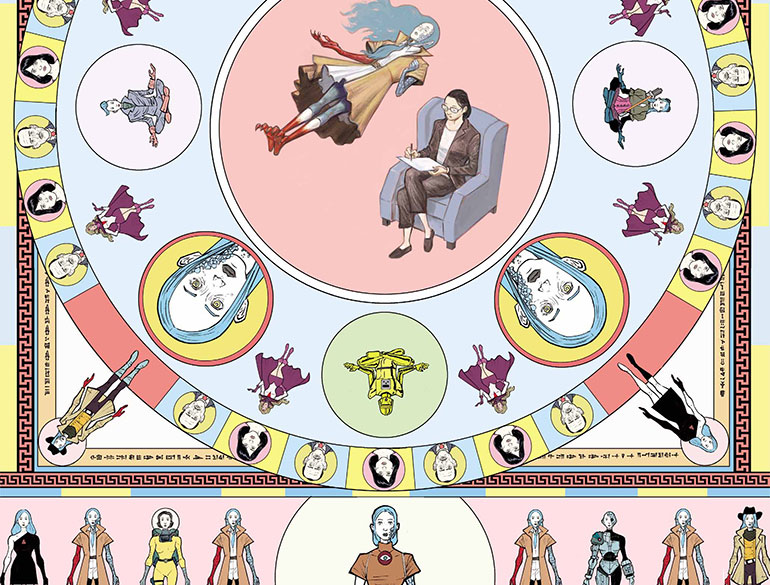 C2E2 this year was quite the blast! Some excellent titles were announced and we at Comicosity got the chance to talk with some excellent creators, including the thoughtful writer, Magdalene Visaggio. She is known for her previous titles Kim & Kim and Quantum Teens Are Go, but this time we got the privilege to talk about her most recent series  (whose second issue hit stores today!) for the DC imprint Young Animal: Eternity Girl!

Allen Thomas: One of the big questions that has been on my mind is how do you feel about writing Eternity Girl so far? What is the experience like for you?

Magdalene Visaggio: It’s not an easy book to write. As someone who deals with depression on an ongoing basis, it requires me to sum up a lot of that stuff, which makes it a pretty difficult experience, but it’s not a bad one. I just have to make sure I get it out of my head when I’m done.

Otherwise the experience working with DC has been extremely positive, but the actual getting into the head space of making that book can be fairly draining. 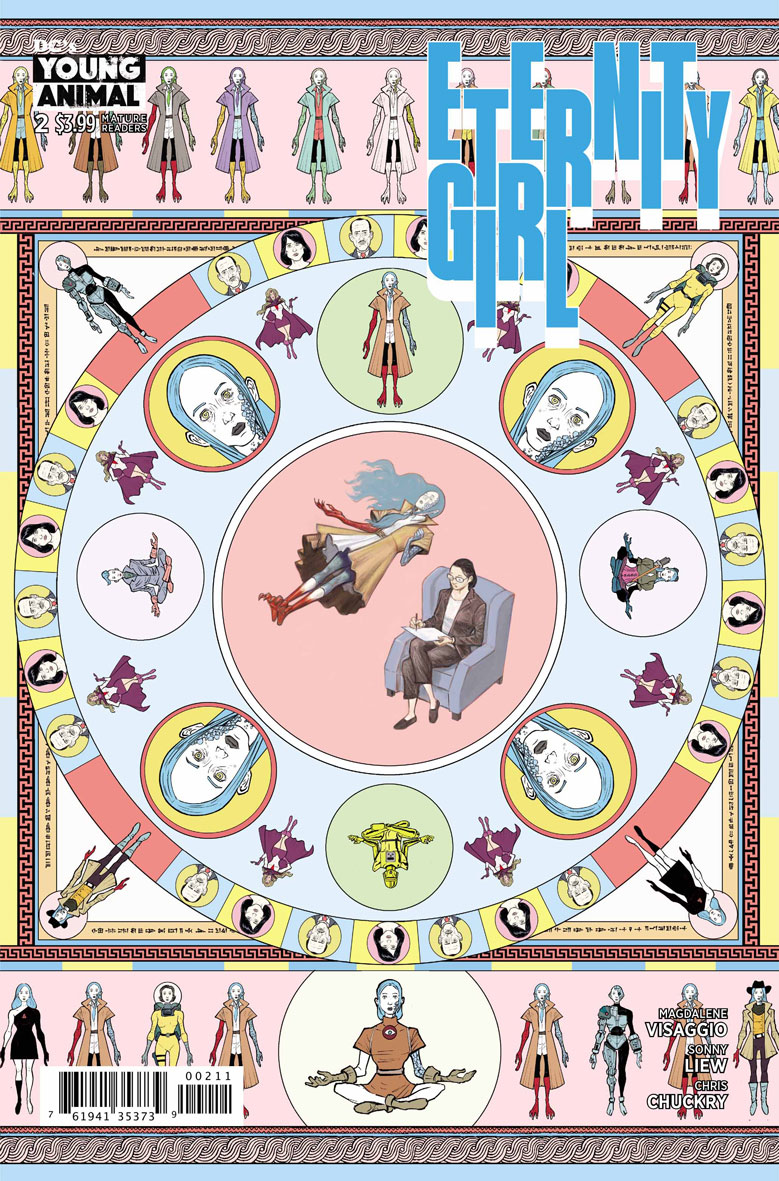 AT: I guess that leads me to my next question. Working with Young Animal specifically for DC, what has that been like for you?

MV: Oh it’s been amazing. I love working with Young Animal. I get a truly stunning amount of creative freedom. I don’t get a lot of pushback on my stories because they recognize that it’s kind of … I hate to fucking use this language … it’s kind of auteur-driven.

My editor just always tries to make sure that I’m actually getting the vision that I have to the best of my ability. He’s always been like, “You seem to have a really good handle on what you want this to be,” and so it’s been really positive.

I kind of describe it as like working with Black Mask but with more resources behind it, more organization. I get a very wide berth. Once you get past the development process — which involved getting a lot of buy-in from DC corporate and from Warner Brothers corporate — that’s where change is happening along the way. That’s where there were other people getting their input. But once all that was done we had the settled, ‘this is what the book is going to be.’ It’s just been an extraordinarily positive experience.

I really love working with them. 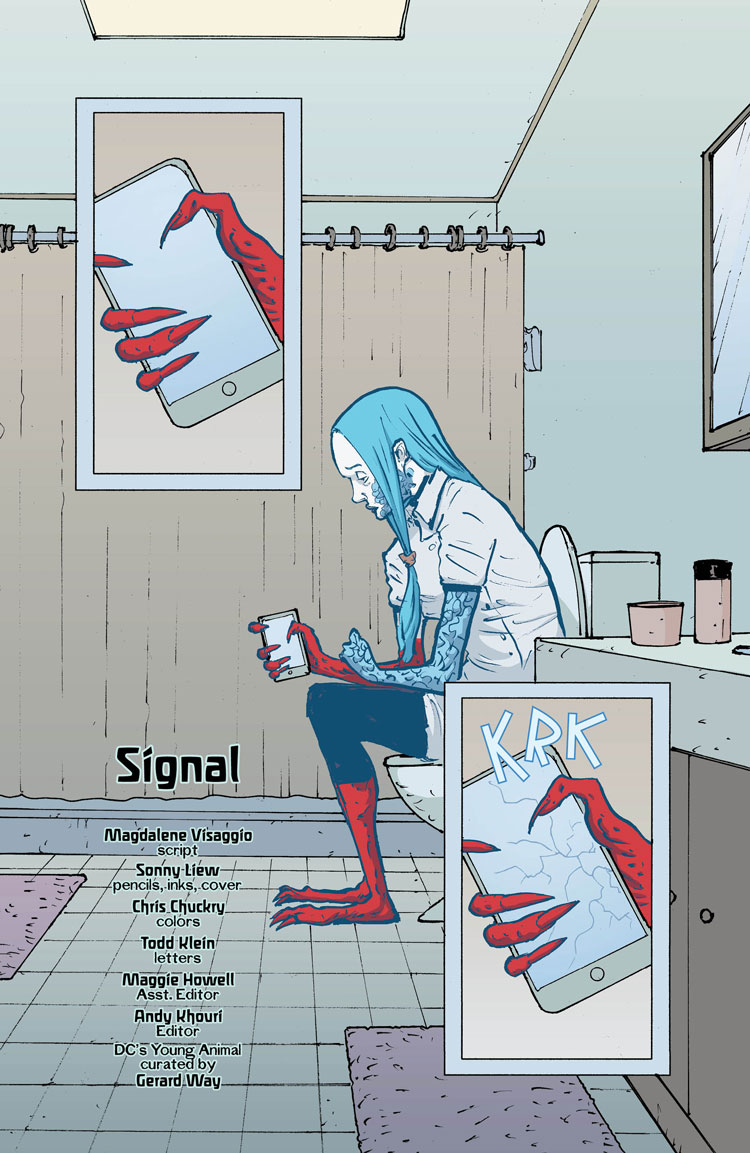 AT: I like that you brought up the idea of what you want this to be. If you had a thesis or an ethos for Eternity Girl, what do you want this series to be?

MV: I just want it to be a book about what depression feels like and what recovery can mean.

I want it to be a story where recovery is always in mind, is always the goal, and where the main character’s surrounded by people who are doing their best to help, and even when it’s not always working. It’s a story in which someone has all this at least well-meaning support.

I never want it to be a story where it feels like, to the reader, there’s no out. 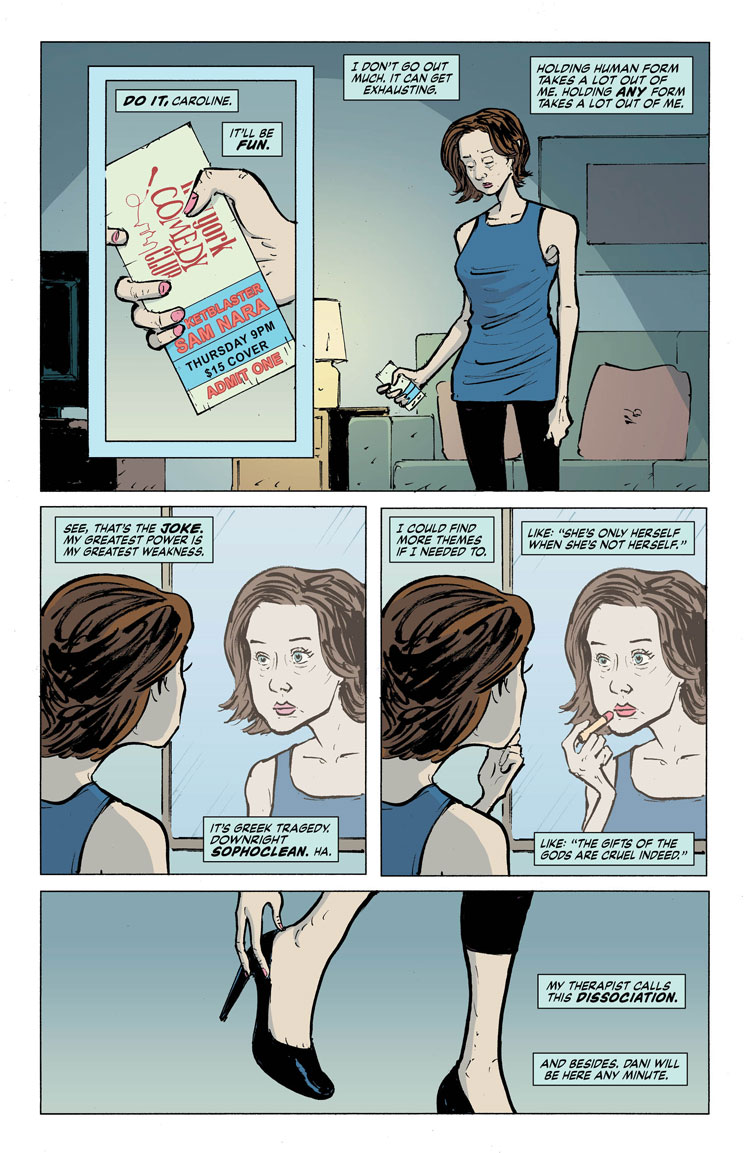 AT: When you take that aspect of mental health in creating this comic, what do you want to put forth to the readers? If a reader got something, a message, from what you were writing, what would you want that to be?

MV: I don’t really do messages. The way I think about storytelling is there’s what I want and then there’s what the reader gets, and the only text the reader has access to is the text in their own head. There’s no objective text, you know?

Because everything is going to be mediated through the reader’s perceptions, the reader’s experiences. So I’m trying to put out a story where my experience of depression is reflected, where the end goal that I’m building is always towards recovery.

But there’s no “message,” because I don’t really believe in messages. I just want the reader to have an experience with this book that means something to them, whatever that means to them. 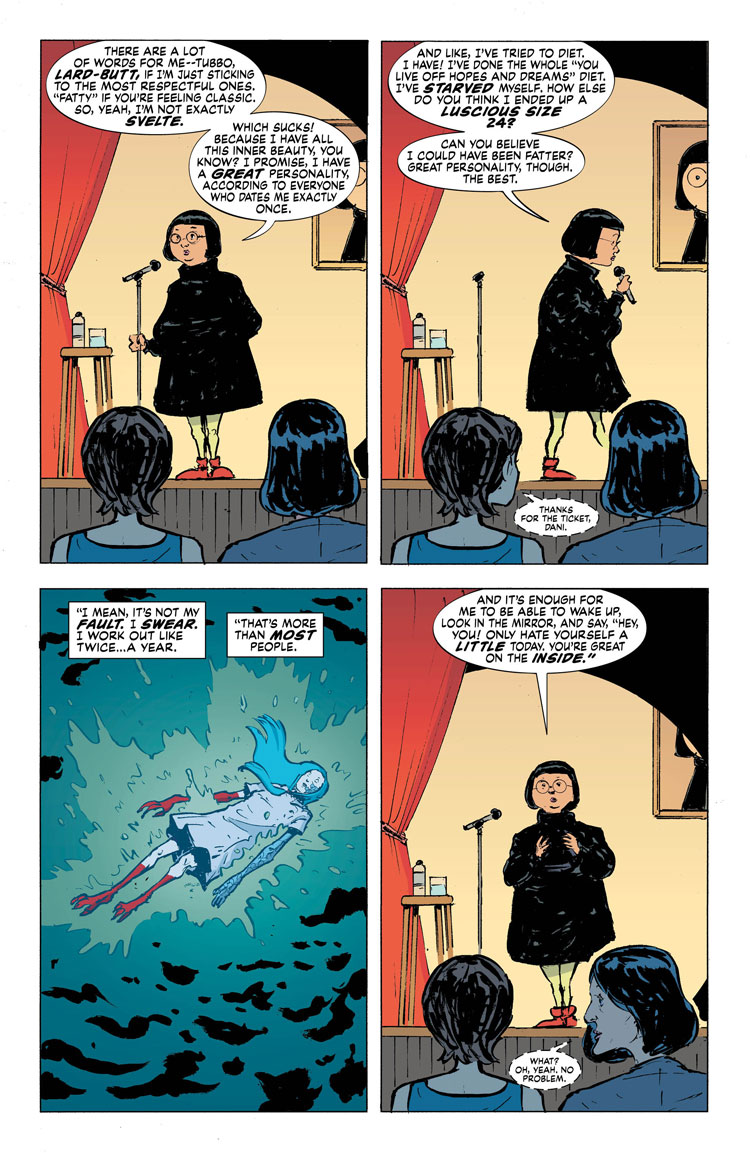 AT: So we’ve talked about the writing aspect, but how do you feel artist Sonny Liew brings some of that together? What, visually, expresses the core theme of the story?

MV: Sonny is brilliant, and every issue when we get art from him, it’s incredible. He’s been developing this sort of visual language for the book that helps elevate a lot of what we’re trying to accomplish, and this is especially true starting in issue #2 when the book starts to really dive into the weird.

So he’s been doing this thing where a character’s talking and suddenly one of them will be flipped upside down relative to the person they’re talking to with no explanation within the frame, and that’s not anything I asked for in the script. What’s really cool is that when you watch it happen it plays out in this visual spiral, where the characters are changing position. 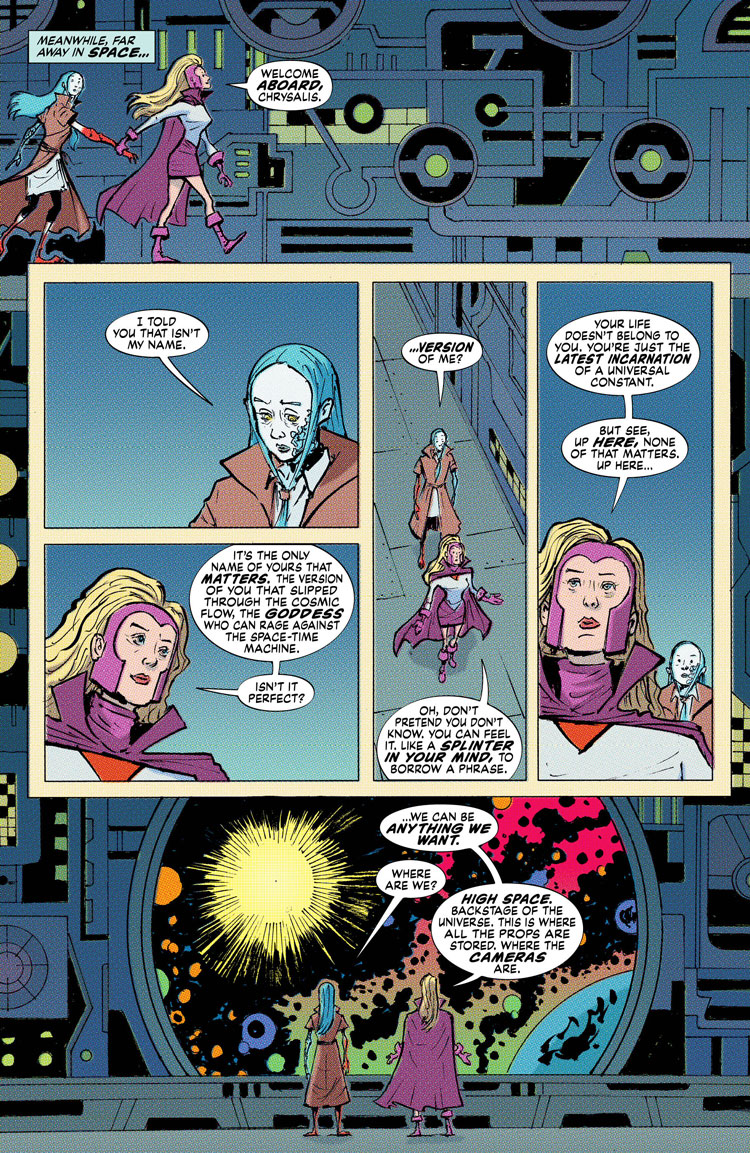 The image of the spiral is actually a really prominent one in the book, and it speaks to what I was just talking about with the reader’s experience of the text versus the objective text. That’s something I’m getting out of his art, that he’s elevating the book. There’s a sense of disorientation, being out of control, but more importantly, the spiral of reincarnation and rebirth, which is a huge image in the story.

That’s to me the most obvious example of the way his visual storytelling is really pushing the book to heights even I couldn’t have gotten to by myself. 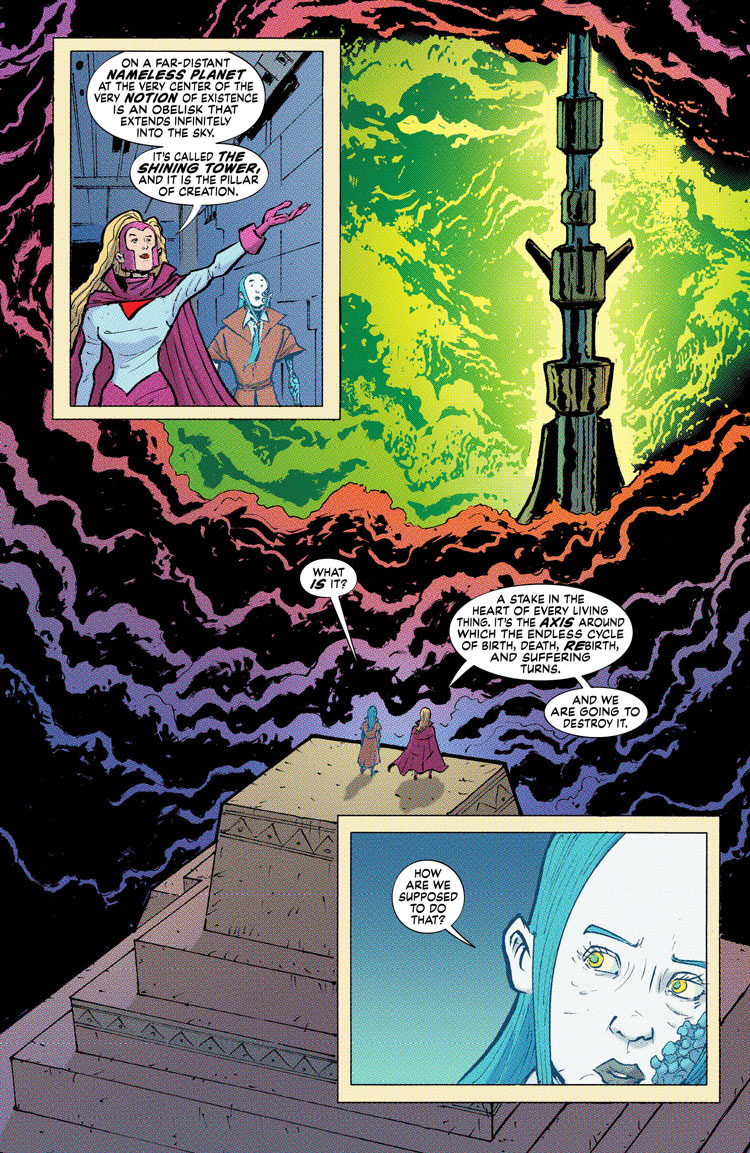 AT: To wrap things up, where do you hope Eternity Girl goes in the future in a creative sense, in a sense of bringing in the readers, what they might read from it?

MV: I guess where I want the book to go next (let’s say we get another mini), I’ve been talking a lot about recovery and the book answers the question of recovery kind of definitively. But there’s a lot more to be explored in that in terms of what that looks like in a longer term process.

I would love to get the opportunity to tell that story. It’s important to me for the character to have that future and to do that work.

Eternity Girl #2 is out TODAY so be sure to pick it up and see just what Mags and Sonny have in store!