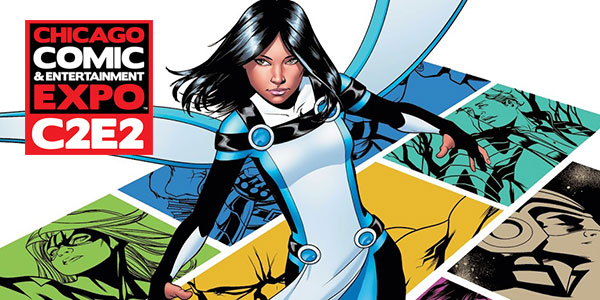 Post-Forever Evil, the World’s Greatest Super-Heroes reconfigure again, but few could have predicted that one of those teams would be heading north — and then waaaay north — as the Justice League United team splits its time between Canada and deep space. Heading up art duties on the brand new title, which saw its debut issue last month with an issue #0, is artist Mike McKone. No stranger to the Justice League of days past, McKone spoke with Comicosity at this year’s C2E2 about designing the new First Nations character Equinox, what its like to research Northern Ontario as a comic book setting, and just what we can expect out of Hawkman! 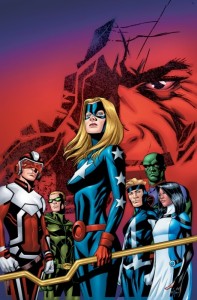 Matt Santori: Thanks for taking time to talk today, Mike, and congrats on the first issue of Justice League United! You’ve dabbled in the Justice League here and there in the past. What’s different for you this time around?

Mike McKone: Well, the first time I drew the Justice League was twenty-five years ago, just after Kevin Maguire left…

MSG: And I was reading it!

MM: Then, we both shouldn’t be admitting to how old we are. (laughs)

It seems like I know what I’m doing this time, because when I was drawing it then, I was 19 years old and hanging on to some semblance of credibility by my fingernails. So, it’s nice to know that if I want to draw somebody in civilian clothing — or hands — I can do that.

MSG: How much collaboration did you have with Jeff Lemire on the creation of Equinox, her look or power set?

MM: Quite a bit. Although technically we co-created Equinox, Jeff really created the character. But we talked a little bit about what she was going to look like. We didn’t want to do that kind of overtly sexual, teenage character that is somewhat prevalent today. We wanted to keep her looking like a teenager. We didn’t want the costume to be suggestive or revealing or anything like that.

Jeff had lots of reference photos on First Nation traditional dress. So, we talked about it quite a bit — mainly about what we didn’t want to do: be exploitative. I sent in some designs and between Jeff, myself, Eddie Berganza, and Ricky Purdin (our assistant editor), we came up with a very simple, basic costume. 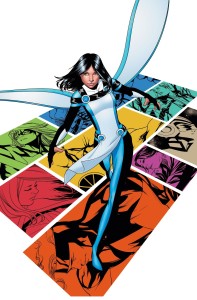 MM: Thank you! The photographs of the native dresses he sent me were incredible. There are a lot of screen prints, and blue and white seems to be a very popular color combination. I like it, and I very rarely like the things I do!

MSG: You’ve introduced Adam and Alanna Strange in the zero issue, both human it seems, and both Canadian.

MM: Is that the same thing? (laughs)

MSG: How have you approached each of them visually — their basic look and in costume?

MM: So far, we’ve only seen Alanna in a heavy sweater, because she’s zapped out of the Canadian wilderness where she’s dressed for the cold. Most of the first arc, she’s in civilian clothing.

But as far as Adam Strange goes, I probably shouldn’t say this in an interview… I actually designed the costume and meant to turn in the design and I forgot. (laughs) I think it was around Christmas break time, and I had to draw a cover and hadn’t turned in the design. I just drew it with the costume I preferred and it fortunately got approved. He’s essentially got Luke Skywalker’s helmet from Star Wars, but with a fin. Eddie Berganza is a big Star Wars fan, so I knew it was going to fly! 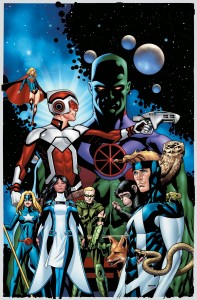 MSG: I don’t know whether you know this, but Comicosity is a Canadian website…

MM: It is? I retract everything I’ve said about Canadians!

MSG: (laughs) Well, I’m not Canadian. That’s the other owner! You can take it up with him.

But Northern Ontario is a very different locale for a traditional super-hero book. What approach did you take in making the environment feel authentic?

MM: Well, I’m not sure that it is authentic, because I decided pretty early on to take a very graphic approach to the snow. All of the trees are solid black, which just looks cool. I did some research on how that area looks, and Jeff sent me some photographs too. But I think it’s much more sparsely populated in the book than it actually is. It’s just an expansive white, with a few trees here and there.

In issue #1, there’s a scene in a fishing port that I needed to get reference on. I actually had to do some work, find out what an actual fishing port in Ontario looks like. But in issue #0, there’s a scene with Equinox walking through a small Canadian town — Moosonee, I think — so Jeff sent me some reference on that. I added the school that is in the area, which he was really thrilled about. He didn’t expect me to do that.

I was really surprised that it looked essentially like a Canadian town, just covered in snow. I was expecting something a lot more basic. I wasn’t expecting igloos, but something a lot less developed. I guess that’s my prejudice. 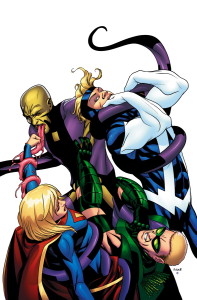 MSG: Of course, the title quickly transitions into a much more radical environment: space! How do you approach the alien environs or characters of a title set off-earth that’s different than your standard super-hero fare?

MM: That’s just fun, because there’s no limit on what you can draw. Jeff never really describes the aliens physically, so I can just draw whatever I want. I kind of have to stop myself from going too far sometimes. They have to remain basically humanoid, because all of the control panels in the super-villain headquarters should be able to be worked by a humanoid. So, if I have some sort of sentient cloud floating around, it probably wouldn’t work.

Science fiction is always fun, because you never have to follow any preconceived notion people have about New York, or a car. If you’re drawing a Nissan, it has to look like a Nissan. But if you’re drawing a spaceship, it can look like whatever you want.

MSG: Hawkman has always been a deeply visual character, and his appearance on the last page of issue #0 made a lot of fans sit up and take notice. What are your thoughts on that character specifically?

MM: I like him a lot. I like him with actual feathered wings, not like wood slats. The last time I read a Hawkman story, he had what looked like wooden wings, which seems extraordinarily un-aerodynamic. He’s kind of arrogant and full of himself. Kind of pompous, which I like. I’m not too fond of the boy scout type in super-heroes.

And he’s only on the last page. Big big things happen to him that I can’t say, or else Jeff will send a hit squad from Canada to take me out.

MSG: Sure, but they’ll probably be really nice about it. 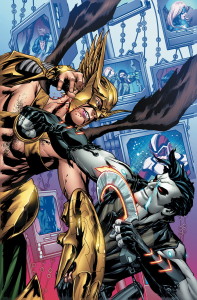 MM: I think the people who are sitting up and taking notice will be happy though!

MSG: Do you have a favorite among the cast?

MM: Oh my. Let’s rule out Equinox, because she’s my favorite and the best super-hero that’s even been.

I like Stargirl and Animal Man. They have a nice relationship in the book, kind of like brother and sister. I’m enjoying that. And I’m enjoying Animal Man’s look a lot. He has a very simple and elegant costume.

MSG: With the team developing in JLU, we get a few A-listers joining up, but for the most part, the group will be filled with a few lesser-known quantities. Do you feel that gives you more leeway in the overall design of the book, or is it more of a challenge?

MM: I guess, yeah. The only characters I designed in the book, as far as the team goes, are Adam Strange and Equinox. But I guess we got more leeway with Adam Strange because he’s a great character, but he’s no Superman. If Superman had been on the team and we were redesigning him, I’d guess there would be a lot more emails going back and forth.

MSG: Any final thoughts or special teases for upcoming issues you can share?