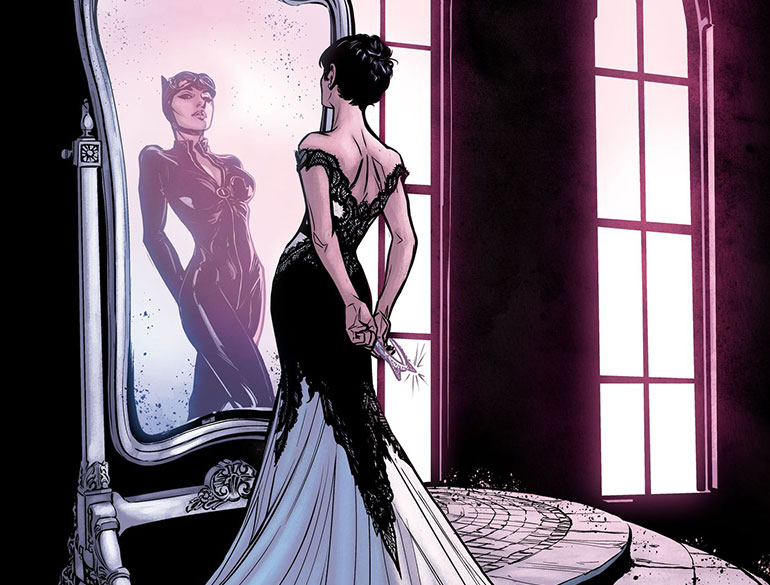 This weekend, visitors to the Windy City were treated to Batman team extraordinaire with writer Tom King and writer/artist Joëlle Jones — special guests the annual C2E2 convention. And the timing couldn’t have been better with Batman #44 revealing Selina Kyle’s choice of wedding dress last Wednesday and the news Saturday afternoon that Jones would be helming a new Catwoman ongoing, launching July 4, the same day Batman #50 hits stores.

Comicosity got to sit down with King and Jones on the con floor to chat a little about last week’s critical issue and the Bat-Cat wedding that’s just around the corner. 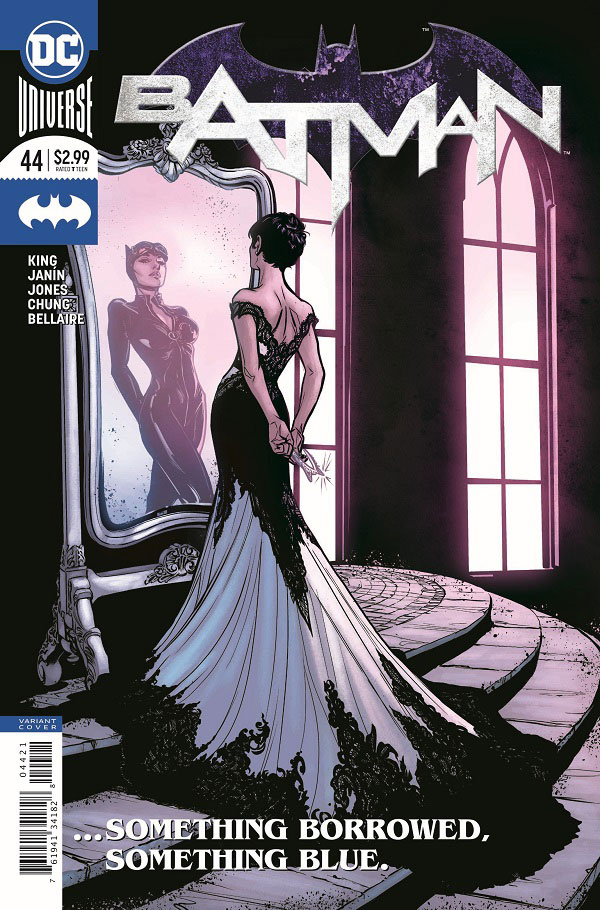 Matt Santori: Batman #44 was a really unique issue — silent on one side, and then using the “archival footage” on the other. How did you two work together to get the pacing and results right?

Tom King: Having worked with Joëlle on a few issues, I can see… not mistakes I’ve made, but the vibe I was getting was that she’s the [Charlie] Chaplin of comics. You don’t need words. She tells a story through expressions. You can read the minds of her characters just by looking at them.

Originally, my plan was either to have a cat in the room that Selina was talking to the whole time, or some kind of running monologue. I was writing it, and it was just shit. I realized that these words were just going to get in the way. I don’t need this. The words would get in the way of the art. So, I cut the stupid cat and all the words. That’s how we ended up with the book you got. 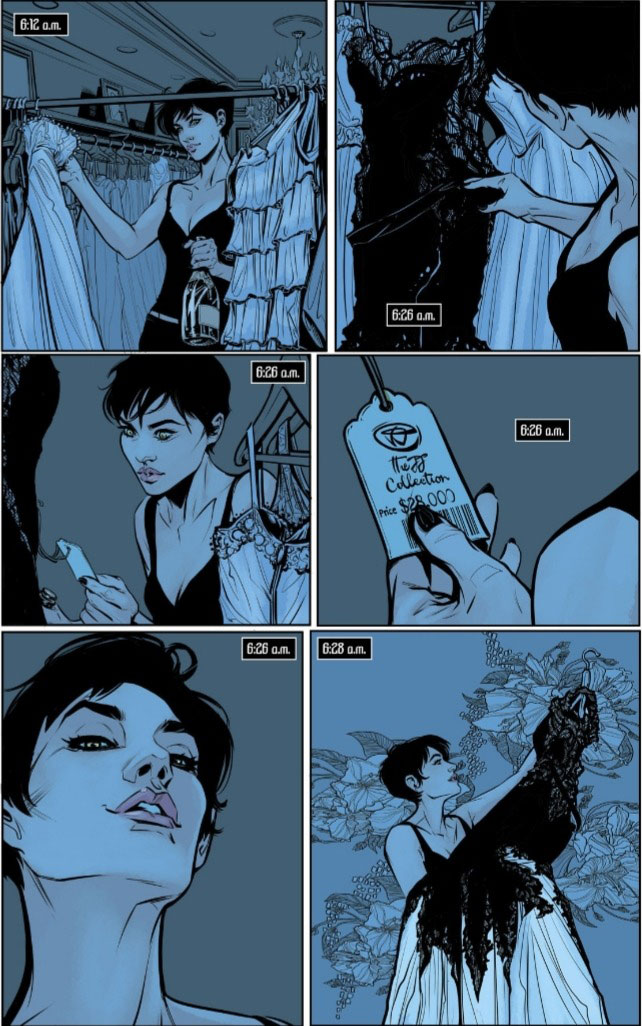 MS: The thing that’s clear about your Catwoman is that there’s a real physicality to how you draw her. She’s sexy, but not objectified. How have you developed that for her specifically?

Joëlle Jones: You know, she’s been one of my favorite characters since I was a girl. Coming from doing Lady Killer, where the fight blocking was so important to me, I ended up taking Krav Maga classes. I ended up hating every minute of it, but I wanted it to feel real.

I was able to take a lot of that from Lady Killer and put that in — make her feel more realistic in her environment, having been through it myself.

MS: Yeah! In terms of choreography, your pages in issue #44 almost feel like a fight scene or action scene, but are just her in this space. It’s really fascinating.

TK: That plot was from Joëlle. She was like, “Tom. Don’t forget she’s a fucking burglar.” I love that she worked in the bomb underneath the floor and the lock-pick to get into the mini-bar.

It’s like: oh right! That instinct is still inside her. Just because she’s with Batman, that doesn’t mean it’s going to leave her. 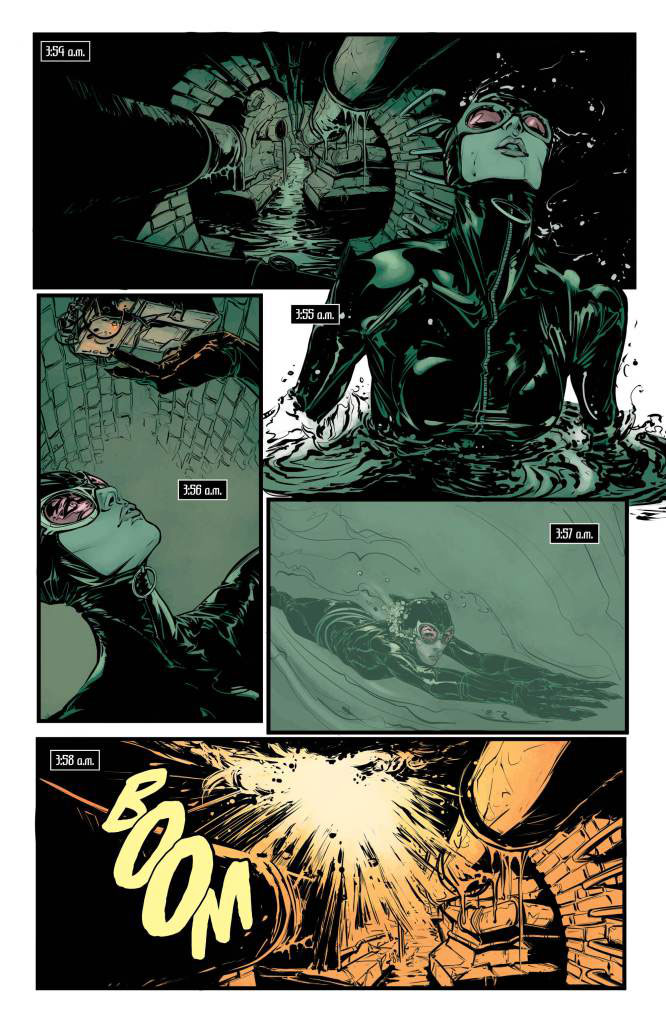 MS: Right. And that leads to another question: We have the wedding coming, but a wedding is a day. A marriage is everything after that. Looking at the Bat-Cat as a married couple or, no spoilers I guess, a prospective married couple…

TK: Wait. Do you know something I don’t know? [laughs]

MS: Ha! How do you see them working or not working as a marriage, looking back at their history together as you have in issue #44?

TK: This might be the wrong thing to say, but I feel like it’s different in modern day marriages. It’s not like when my grandparents got married. When I got married, I’d lived with my wife for three years. It was a wonderful event and everything, but it’s not like the next day we were different people. We’d already had this experience.

I don’t think being married is going to change them. It’s a piece of paper to them. Their love isn’t based on going in front of a priest or judge. If they did it or never did it, their love would stay the same. 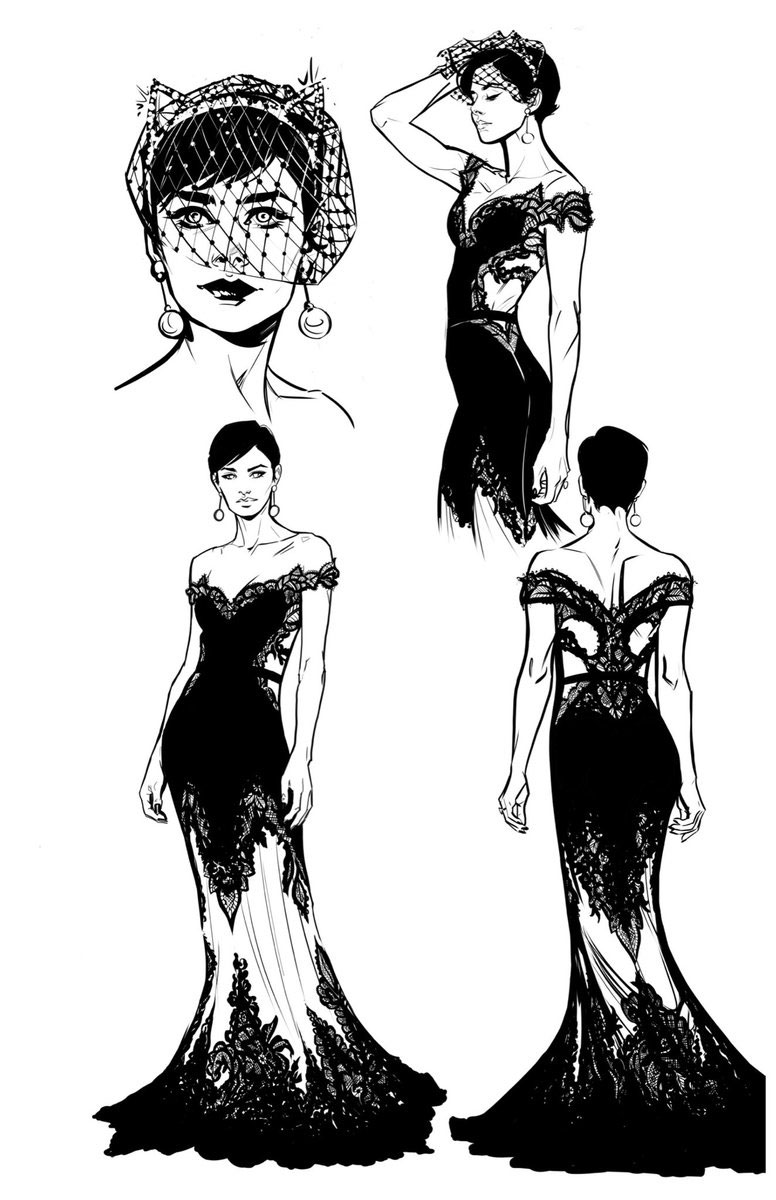 MS: OK! So I have to ask about the dress, because everyone has been so overwhelmed by it. What was your inspiration for it?

JJ: I just took a lot of elements that I thought Selina would wear, that fit her personality. I just never saw her wearing a white dress and a veil and doing the normal thing. I think she’s more interesting than that.

So I tried to reflect her actual personality in the design of it.

MS: The other half of Batman #44 is the pages from Mikel Janin with dialogue lifted from the annals of Batman history.

TK: Right? My editor was like, “This is my favorite issue you’ve ever done!” And there’s none of my words in it! 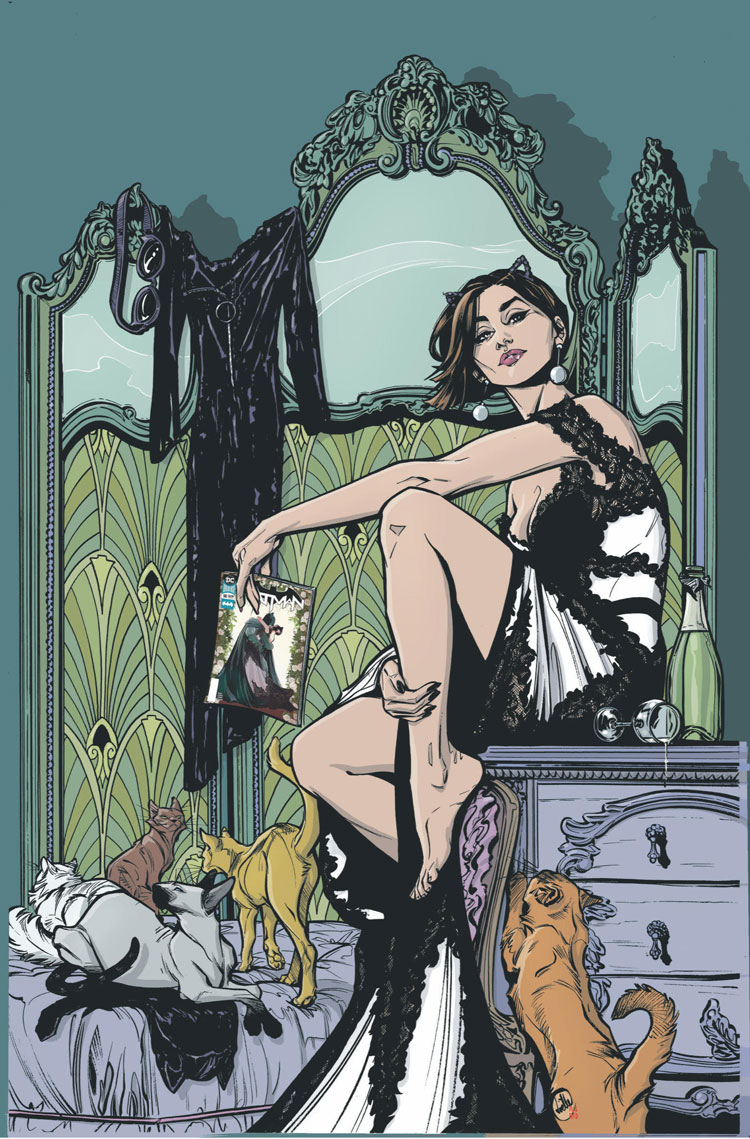 MS: [laughs] When you went into the process of finding those moments, what were you looking for?

TK: I think sometimes continuity is the best metaphor for life. I used this in Vision a little bit and Mister Miracle, but when you look back over continuity, it kind of doesn’t make sense. Like, things happen that shouldn’t happen and events don’t add up.

But because continuity is told by a thousand different people, you don’t get that. You get something messy that’s much more realistic.

This is a relationship that’s gone in and out and in and out, and it’s gone through all these different iterations. And the reason they’ve done that is because there’s different creators on Batman and Len Wein’s vision didn’t match Steve Englehart’s vision and all that.

But what all that amounts to is starts to become like real life. You’re changing in a way and not living a linear life. You’re living YOUR life.