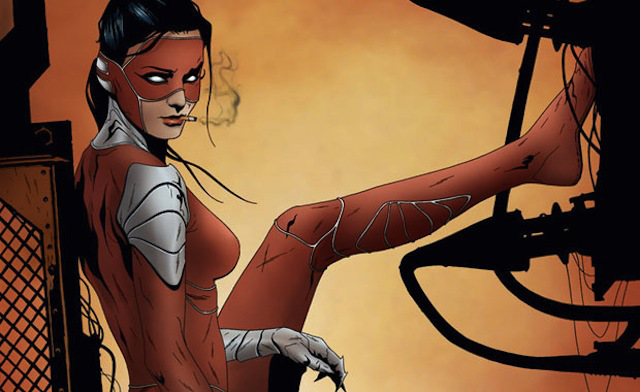 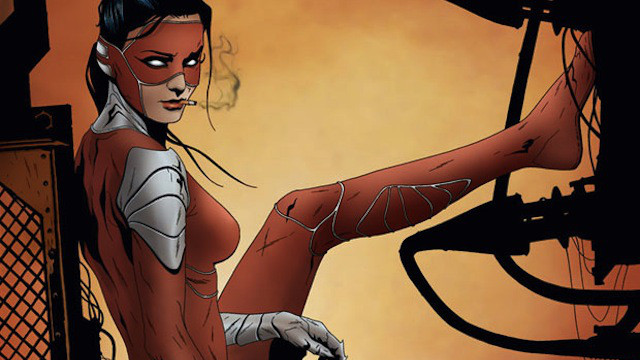 The morality of comic book characters never used to be up for debate. If you were a superhero, you wore a bright costume, helped kids rescue kittens and shook hands with the police when you dropped off the criminals you apprehended, sometimes without even having to land a punch.

If you were a supervillain, you admittedly had more fashion choices, but you probably threatened to kill people — if not outright do so — or attempt to rule the world with an insane cackle. Heroes didn’t carry guns or kill. Villains never won. Period.

But shortly after I started reading comics as a little kid, that all seemed to change. Around 1986 or so, heroes got dark.

Marvel Comics’ first Punisher series debuted that year with former Spider-Man antagonist Frank Castle leading his own title in a hail of bullets and indignation. DC Comics’ Watchmen maxi-series hit the scene, full of heroes like Rorschach, Doctor Manhattan and the Comedian who exhibit sociopathic behavior. Eclipse Comics’ Miracleman had emerged, featuring a level of violence the American comics scene had never experienced with a superhero sidekick slaughtering his attackers after a brutal rape scene. Even perennial good guys Batman and Superman grew darker for the remainder of the decade.

Maybe the shift occurred as a result of a new generation of writers arriving on the scene, having grown up exposed to greater injustice and brutality in the post-Vietnam media. Maybe the fans themselves finally tired of the golden boy image of the superhero and, as in other media, wanted to explore America’s newfound interest in amoral protagonists (think Scarface or Dynasty). In any event, what most comic fans describe as a “grim and gritty” era began, with some still maintaining it never actually went away.

If a pendulum has swung from the hyper-morality of 1950s and 60s comics to the hyper-amorality of superheroes of the late 1980s, Manhunter is a fascinating equilibrium point between the two. Launched as an ongoing title by DC Comics in 2004, Manhunter details the origin and mission of Los Angeles District Attorney Kate Spencer as she arms herself to take out villains for whom the justice system hasn’t found a solution. When Kate loses her prosecution against serial super-powered killer Copperhead, she predicts the defendant will kill again.

Hours later, her prediction gruesomely comes to pass. Determined not to let the killer go free a second time, Kate arms herself with advanced technology confiscated or recovered from police crime scenes and dons a new identity in the criminal justice system: vigilante. 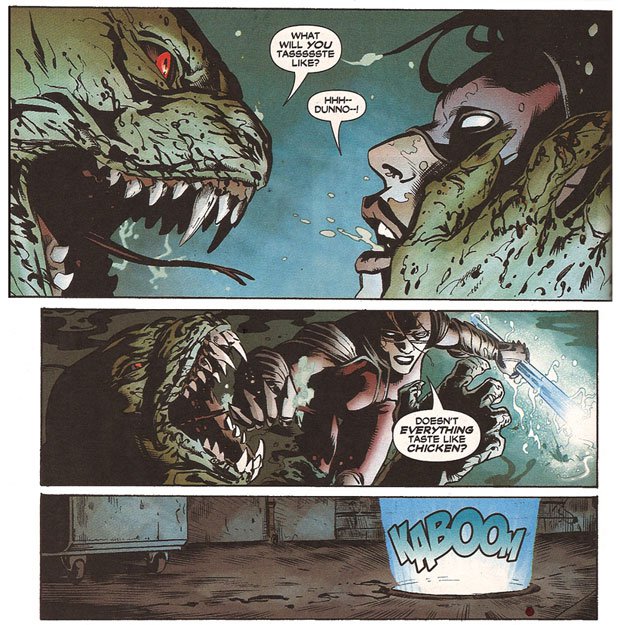 By most superhero standards, writer Marc Andreyko’s presentation of Kate’s origin and motivations are positively banal. Much is revealed about her childhood that leads the reader to understand why Kate became a district attorney, but little beyond her own powerful morality seems responsible for the move between civil service and vigilantism.

Unaware of her own meta-human legacy and an unending stream of comic characters to take the name before her, Kate becomes Manhunter out of a deep sense of justice and an understanding of the limits of a system she works within by day. As she says to a rather famous defendant later on in the series, “I have no problem with lethal force, not when villains pervert the justice system. When all other options have run out, well. . . sometimes safety wins.”

In fact, Manhunter does an excellent job of exposing the arbitrary nature of debates about heroes that kill. Many fans have wondered why the Batman has never taken the opportunity to kill the Joker after the madman has spent years escaping his cell only to murder, maim and terrorize thousands of citizens, including members of the hero’s own family. Many others maintain Batman’s high moral code prevents that from even being a story possibility.

For Kate, moral choices are not all-or-nothing. Her personal code, much like the law itself, is conditional, open to evolution, and subject to interpretation. What’s so intriguing is that her judgments neither seem weak nor flexible from a reader perspective, but instead deliver confidence in her commitment to both occupations. When Kate chooses not to kill her opponent it speaks as much of her moral acuity as when she does. She hasn’t abandoned the legal system as a course of action. Far from it, she works as diligently within the system as without.

As an avid Law and Order fan myself, I also delight in Andreyko’s split focus between Kate in costume as Manhunter and her in more courtroom-appropriate attire. Throughout the series — which ran in various forms for nearly six years, avoiding the publisher’s ax no less than three times — Kate prosecutes (and ultimately defends) several trials featuring characters from across the DC Universe.

The series features several spellbinding artists, including Jesus Saiz, Javier Pina, Michael Gaydos, and Georges Jenty, all of whom ably maintain a visual interest in Kate’s everyday settings and clothing — no small feat. Ultimately, the focus on Kate, rather than simply the Manhunter, as a protagonist and hero only serves to underscore the intelligence, bravery, and moral complexity motivating her double life. It also serves to expand Kate’s world in two particularly compelling ways. 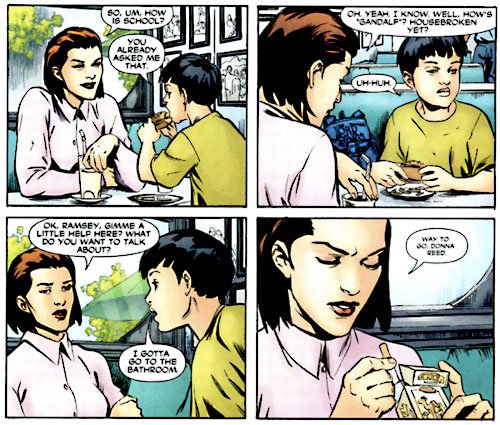 Motherhood has never been particularly pervasive among super-heroines, but certainly hasn’t been depicted quite this way before. Frankly, Kate is bad at it. Divorced with limited shared custody of her 7 year-old son Ramsey, Kate is evidence on paper that maternal instincts don’t hit everyone that brings a child into the world, no matter how much that child is loved. She forgets pick-up times, smokes in his presence (in a town and era where that is considered nearly criminal), leaves horrifying crime scene photos around for him to view, and doesn’t even secure her own arsenal out of his grasp. When these failures land Ramsey in critical condition at a nearby hospital, it’s hard not to understand her ex-husband’s outrage.

From the standpoint of good fiction, however, I find this aspect of her character both compelling and exceptionally refreshing for the superhero genre. There’s no question Kate tries to be as good a mother as she is a Manhunter, but it’s just not going to happen — perhaps not even in a tale set 15 years in the future, wherein Ramsey embarks on his controversial career of choice.

On the flipside, the focus Andreyko gives Manhunter’s supporting cast led to some of the most positive portrayals of gay characters in its years of publication, even earning the title a GLAAD Media Award nomination. Kate’s co-counsel and best friend Damon has a large role in the series, as does his boyfriend, newly out super-hero and Golden Age legacy Todd Rice (Obsidian).

Damon and Todd aren’t alone in their nuanced character depictions in Manhunter, as the entire cast is very carefully scribed for maximum reader interest, but I have to applaud just a little bit louder for the book leading the charge in this case. 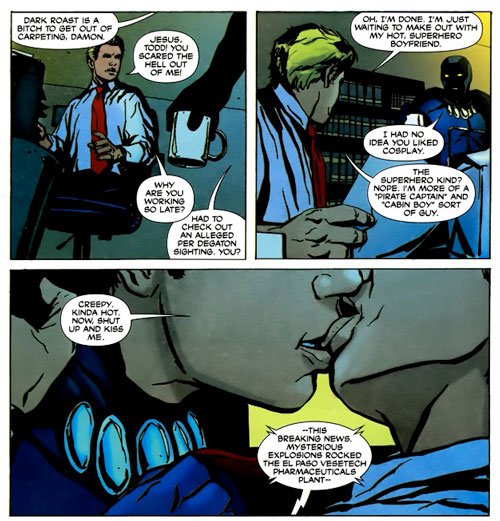 All in all, Manhunter represents a thoughtfulness to the debate of heroism and morality that is often overlooked in mainstream comics, from one extreme to the other. The only shame involved in this case is that Kate Spencer hasn’t propelled to iconic status with fans, as have some of her more famous clients or witnesses before her. The wheels of justice grind slowly indeed.

This article was originally written for and published online by the Idler Magazine, July 2012.