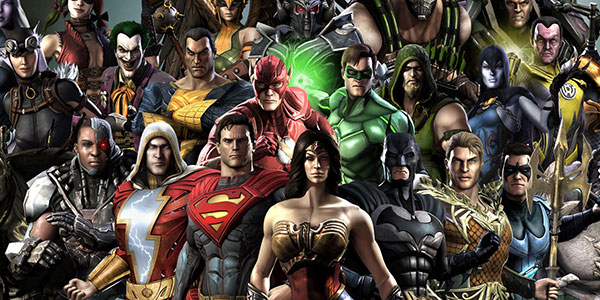 On January 15, 2013, the first digital chapter of Injustice: Gods Among Us was released as a promotional tie-in for the video game of the same name — to very little fanfare. 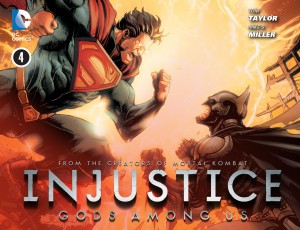 My interest in picking up the book was simple. I love the DC Universe characters but have been having difficulty finding books I consistently enjoy since they hit the reset button and launched The New 52. So, after a little research on the concept behind a book (meant as a marketing ploy to a fighting game I had no intention of ever playing), I made a somewhat skeptical purchase.

Now, I’ve already said it had very little fanfare, and that I first approached it with skepticism — hoping, but not expecting, it to fulfill a void. Let’s be honest: the history of properties such as toys, TV, movies and (yes) video games being turned into comic books is historically very poor. And my initial impression was leading me to believe it would be the same, as the art on the book was at first glance, to put it mildly, a little rough. 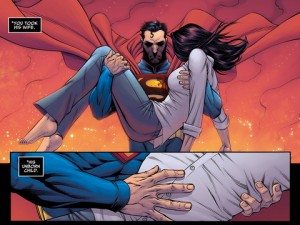 But something happened. Simply put, the writer assigned to the title — Tom Taylor, an Australian playwright best known for his work on a short run on The Authority in 2010 and various Star Wars mini-series for Dark Horse — just so happened to be a terrific talent, as well as having a sharp insight into the core of the DCU characters.

For a lapsed DC reader such as myself, the series was an easy jump-on, containing a moderately adjusted version of the DCU prior to The New 52 as its starting point. Are Clark and Lois married? Yup. And it’s a major plot point. Do you want a grumpy old goateed Oliver Queen as your Green Arrow? Check. You’ll find him here. These types of examples helped ease me into the world of Injustice, and over time Taylor has incorporated more elements of The New 52 as well as elements of his own to create a unique world. 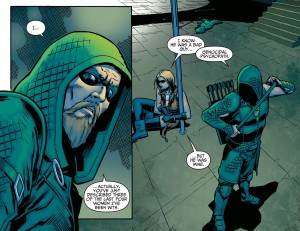 And that is the key to this series: the spot-on presentation of the world and the characters. While many of the plot points and scenarios push the boundary of ludicrous at times, the core of this book is those simple moments — and it all changed for me (and most everyone who has read it) in issue #5.

Previous to the 5th issue, a storyline had been built-up that appeared to be set-up for a crazy, action-heavy series of battles, as the ideologies of the characters and who they would side with — Batman or Superman — was largely put in place. I approached issue #5 expecting it to be the fallout of the brutal actions of Superman, and the impending war spiraling out from them.

Of course, I didn’t get that, but in a good way. 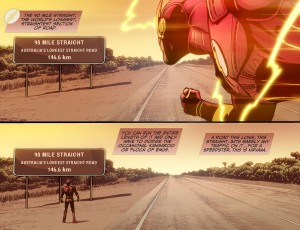 Once my confusion over what I was reading subsided, I got a solid, character driven story about two people whom you would never picture interacting. The story focuses on Oliver Queen protecting Harley Quinn — a heart broken, damaged and unstable young lady looking for revenge on the most powerful being on the planet, himself an emotional ticking bomb, for what he did to her Puddin’, the ruthless Joker.

This seemingly sharp right turn has actually become the hallmark of the series, and likely why it’s been such a success for DC in the digital market, as well as in the subsequent ever-increasing print sales. From the Arrow/Quinn exchange (Tom Taylor’s favorite issue), to getting under the skin of Wonder Woman’s feelings for Superman and his actions in a world of ever-changing circumstances. The Flash exercising his moral dilemmas and the beautifully logical way a man faster than any other alive would seek to find peace of mind (my personal favorite), or perhaps the suddenly questioning Shazam, and how he views the actions of someone he has idealized but no longer fully understands. 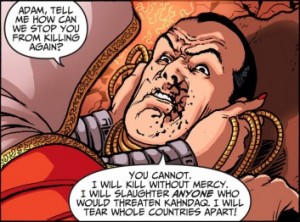 Welcome to a series that presents little character studies, allowing the reader to know but not necessarily judge the actions of those it showcases, even when we might not agree with their viewpoints. After all, in Injustice: Gods Among Us, no one is truly evil or wrong, but that doesn’t mean they are right. And therein lies the intrigue of the overall developing storyline.

I hope this explains why I have so passionately proclaimed my admiration for this series, and have enjoyed it so much. I have tried to explain its qualities without giving away too much to potential new readers, because — quite honestly — I wish you to experience it for yourself.