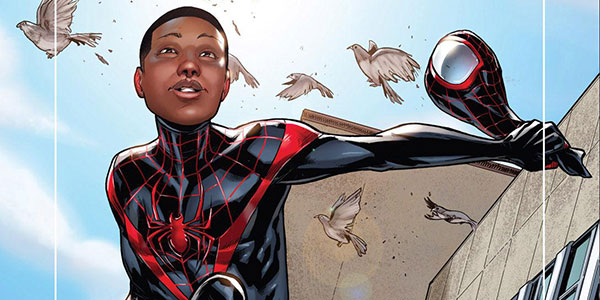 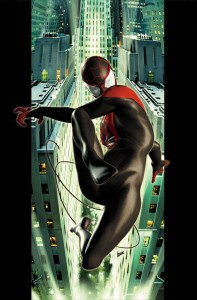 If there is one promise Marvel has been able to keep about the ‘Ultimate’ universe, it is that death matters. Death of Spider-Man was one of the best stories told that year and effectively wrapped up the young life of Peter Parker. Once the dust settled on the event, Marvel announced that the series was going to continue and be apart of the relaunch of the already relaunched Ultimate Universe. But how?

Enter Miles Morales, a 13 year-old of African-American and Puerto Rican descent, who unwillingly takes the throne as the new Spider-Man, in a “coming of age” origin story that shares similarities to the overall Spider-Man lore, but also paves a new path with original characters. Still bitten by a spider (but this time while hanging around his uncle, the Ultimate version of the Prowler), Miles must learn to use a new set of powers and also how to become a hero. He has support, though, from the usual cast you would expect in a story about a teenager, which includes his easily excitable best friend, protective parents, and the previously mentioned Uncle/Prowler to name a few.

Why you should be reading it

A very common complaint amongst the comic book community is that these companies never let the heroes pass the torch, have someone else put on the cape, or take the mask. Brian Michael Bendis finally did it with Spider-Man and the change was just as good and refreshing as you’d imagine. The series keeps the core values of what makes Spider-Man such a strong character  (responsibility, uncertainty of your teenage years)  and re-imagines them with a new cast. It also doesn’t hurt that they new Spider-Man in Miles is so lovable  His personality has really gotten to shine in the first 20 issues, whether he’s talking with his parents about what makes a hero, or he’s trading one liners with the many C-list villains that have shown up so far in the series. Being a second generation hero, Miles has seen super-heroes and has developed a bit of hero worship, which has given him a new wrinkle that is fun to see play out. The legacy aspect of the comic has been one of the best subplots throughout the books young run so far. Seeing such a strong connection between two people, Miles and Peter, who have never met (Spider-Men doesn’t count in this article!), harkens back to the days when DC Comics, notably with Flash and Green Lantern, had the courage to create new heroes and continue the legacies. 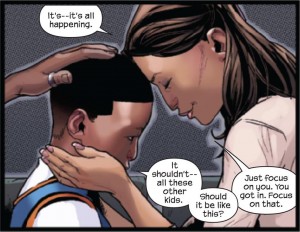 Ultimate Spider-Man just feels like a Spider-Man comic. Everyone has different tastes on how they prefer their Spidey, but I’ve always loved mine as an adventurous teenager trying to figure things out as he goes. This is the closest I’ve gotten to that type of story since, not surprisingly, Ultimate Spider-Man was first released way back in 2000. Since issue 1, this has been the best written Spider-Man on the stands.

The series has been graced with three artists who each have given superior art. Sara Pichelli, Chris Samnee, and David Marquez have combined to draw the first 20 issues and each artist, while different in style, were perfect fits for the title and showed off how diverse the title can be.

Where to start for the full experience

The origin tale and Miles frequent run in with the Prowler to into the satisfying conclusion in issue 12. Not a lot of twists and turns, but a very fun introduction to the characters. The action scenes and the random villain pop-ups keep the arc fresh. 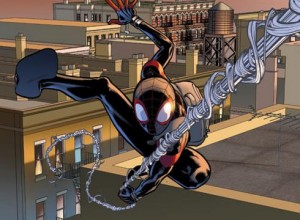 Divided We Fall finally wraps up in the Ultimate universe and Spider-Man is allowed to be in his own little piece of New York again. One of the problems that have plagued the series is that there was too much interference from other big time characters and events, like the Ultimates and SHIELD. Issue #19 brings Miles back as the main character with no one sharing the spotlight and returns the series to its family roots found in issues #1-5.