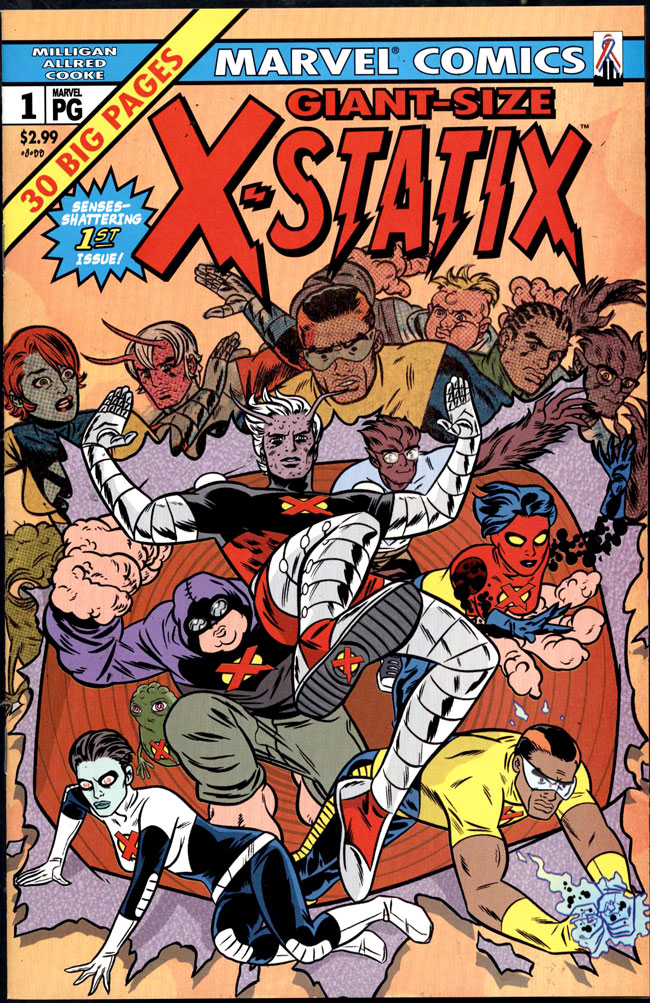 We’re back with another week of the Comicosity Book Club! This week we closed the chapter that was Peter Milligan and Mike Allred’s X-Force and started with the fantastic X-Statix. In addition to a new name, we have new team members, as well as some new villains!

Want to join in the conversation? Follow the Twitter hashtag#XStatixClub each and every Sunday! We’ve got some of your favorite panels and thoughts below to kick things off.

Who needs a super villain with this guy around? #xstatixclub pic.twitter.com/RdMgWbXv7A

I dig Fegredo’s art in X-Force #129. It’s a departure from Allred’s style but it stands well on its own. #XStatixClub pic.twitter.com/drTquNKnX8

I adore X-Statix but there’s a great essay to be written about the shallownessof the female characters in the series. #xstatixclub …

…not because the characters are shallow (all are) but the MPDG aspects of Edie, mysterious/sexy Dead Girl, Venus as an object #xstatixclub

At times, I think Mr. Milligan must’ve hated our culture at that time. His satire was so bleak, so harsh. #XStatixClub

X-Statix handles a lot of deep issues in unique ways. This is a lot for a first issue. #XStatixClub pic.twitter.com/PEQ1CwsiKZ

This week I’m going to forgo my thoughts to bring you a few extra extras in honor of reaching the “official” X-Statix series. First up we have a 2002 interview with author Peter Milligan about the relaunch of the series on the now-defunct Sequential Tart site. I particularly like the part about changing the name of the series because they didn’t want to pay Rob Liefeld royalties. Read an excerpt here:

ST: There are obviously many real life issues and situations that end up as plot lines or parodies in X-Force. How do you want readers to see X-Force — as a satire on these situations or just as sharing similar stories with real life?

PM: All of it. I want readers to be surprised, amused, and sometimes angry. Of course there’s satire in there but it’s important that there is real emotion too. For all the post-modern malarkey and exploration of fame and the superhuman, I care about the characters in the book and I want the reader to care about them too.

ST: There are rumors floating about that the reason Marvel is relaunching X-Force as X-Statix is because they have to pay royalties to original X-Force creator Rob Liefeld, a concept you played with in the actual comic book. Is there any truth to that? What is the real reason behind the name change?

PM: I should probably consult the Marvel legal team before answering that one … but let’s just say that I like the idea of reflecting the machinations of the comic book business within the pages of our little series. Let me also say that no one forced me to do anything. Let me say further that nothing would have been changed unless I — and the rest of the team — believed it was right.

There are some great other gems in here – including Peter lamenting killing Edie – so be sure to check out the full interview here.

I have every X-FORCE book with the real members, but I quit the book when you turned it into a funny paper. The characters are goofy and the graphics are as bad as Cable’s book. It looks like an an issue of Archie Comics. If you must keep this book, at least change the name because it has nothing to do with the real X-Force or the X-Men. This book may have hardcore characters with death and action. But who cares if the stories, characters, and graphics suck? You lost a reader after the first new issues.”

You can read the full letters page here. I recommend checking it out for the rant against Vivisector and Phat’s homosexuality!

Did you play the Marvel card game? Check out Venus Dee Milo’s card! I have no idea what it means, but I’m confused why they enlarged her chest so much…. 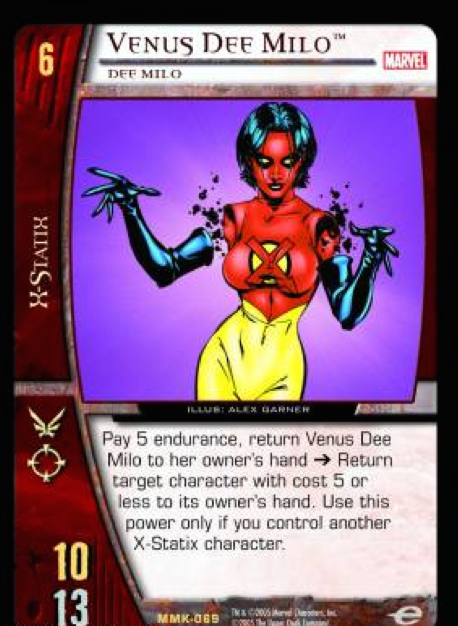 Finally, a few weeks ago I talked about sales numbers for the new X-Force series, and I thought it’d be interesting to take a look at the sales now that we’re into a new series. Does a new #1 boost sales? Let’s take a look at the charts: 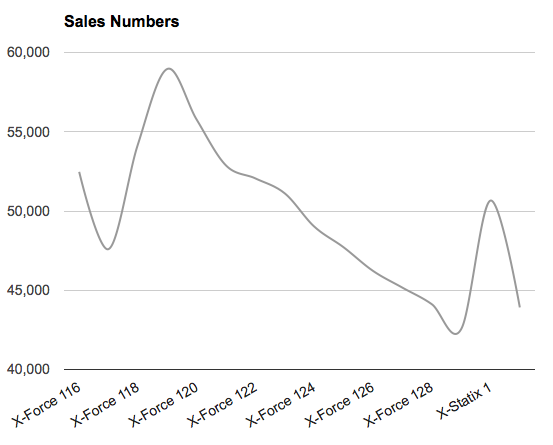 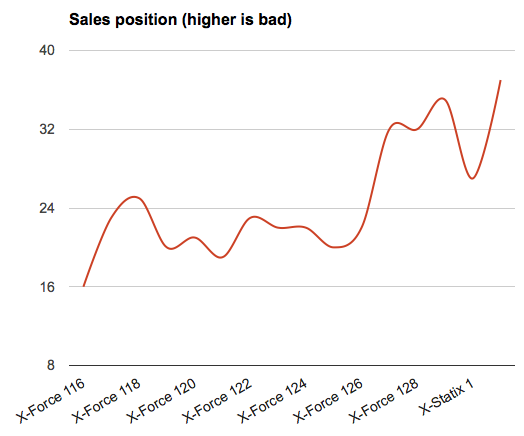 The first of this series, X-Force #116, debuted with total sales of 52,471, and a chart position of 16. The first issue of X-Statix sold fewer than 2,000 copies less (50,657 to be exact), but drops to 27 on the charts (who can compete with Transformers Armada #1?). This was still a huge boost for a series that was on the decline, but the trend doesn’t look promising for the future. I’ll be excited to see what crossover events do for the series – can the Avengers work for sales in a way that Wolverine couldn’t?

Next week we’re going to continue our#XStatixClub discussion X-Statix issues #3, 4, and 5. We’ll find out what’s really going on with Solomon, get to know Venus better, and (I hope) get some more awesome Doop action. Please feel to share your favorite thoughts in the comments section below, and as always, join us on Twitter use the hashtag#XStatixClub. Thanks again to everyone who participated!