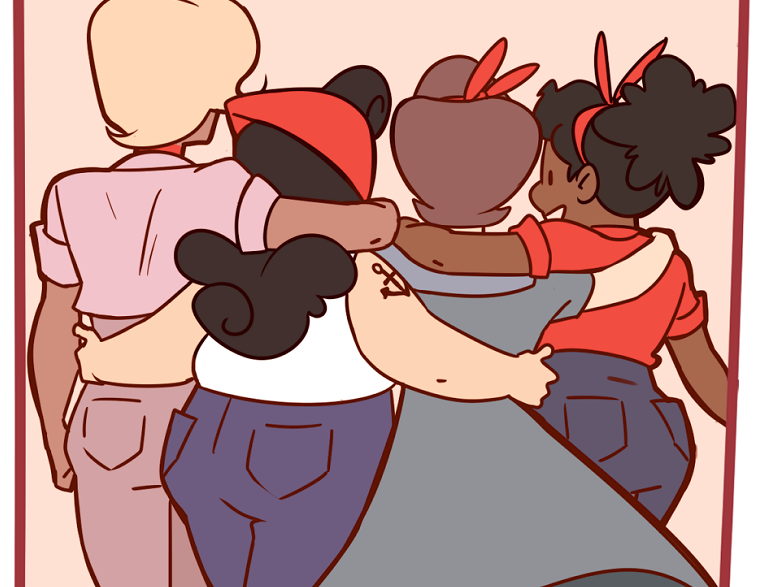 Hey guys! It’s me! Mexi! Here for another Comics I Need to Read! The column where I read a comic by a little known creator!

Now, I know that I usually do a comic that I tell you to read the previous month so that you all can read along with me for next month’s installment, but that’s not the case this month.

I honestly did think about whether or not I should just make this a different, separate column all together, because this is something that really, truly touched me more than anything ever and I did struggle with whether it should be in Comics I Need to Read or if I should just talk about the impact it had on me personally, especially since I had already chosen a comic for this month.

However, I decided that I would go ahead and talk about it anyways on my monthly column. Because my column can be about whatever I want it to be, to an extent, and this is just my preferred platform. I’m sorry for you all who read Skin Deep, and I promise I will do a Skin Deep Comics I Need to Read next month, but this month I would like to talk about a comic I recently found and felt a deep connection to:

Rock and Riot by Chelsey Furedi

Rock and Riot is a Grease-esque tale of gangs in the 50s that are created entirely out of LGBTQIA+ members. It’s an adorable romp that doesn’t shy away from allowing a dream-like level of acceptance while popping the bubble of perfect happiness with the some of the realities of living in the 1950s.

You can read Rock and Riot here.

I’m not sure if I know how to express how deeply I feel towards this comic. As a demisexual panromantic, I don’t generally look for myself in media because there are rarely any well-rounded asexual or pansexual characters out there, let alone a show or a book or a comic that cares enough to dive into more complicated matters like how to even understand asexuality, demisexuality, and the romantics that go with them. I don’t hold my breath for that, and when I see it, usually, the character is just used as a punchline or seen as a bad thing or is just misrepresented by people who don’t quite get it.

That’s why seeing not one, but TWO demisexual panromantic people on the cast list made me cry.

Misty-eyed, snotty-gross tears that just burst onto my face, and thank god I wasn’t in a room with other people or else I would have had to of started singing Flight of the Concord’s I’m Not Crying.

And I don’t cry for media. The only thing I’ve even come close to crying for something was the almost-death scene in Toy Story 3. That’s about it. I’ve watched a lot of things, I’ve read a lot of things, I just don’t cry for things, and I burst into these weird tears of joy when my friend sent me the cast list for this comic and I saw the two of them on there. 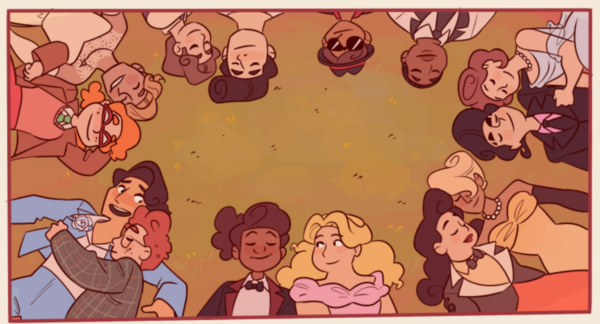 In fact, half of the main cast is ace. 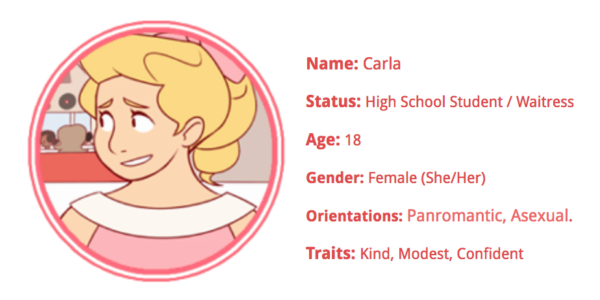 I think it’s the first comic I’ve seen a grey-a in. I think this is the first one. I don’t think I’ve ever seen a comic with one ever. 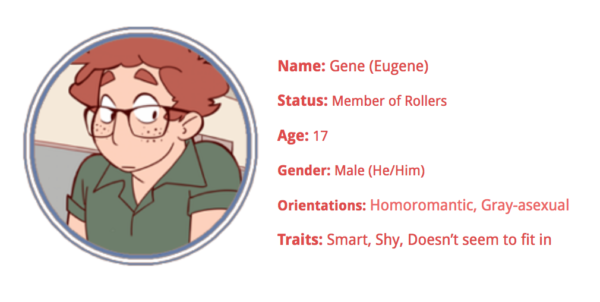 I don’t think I’ve ever seen anyone care enough to place a demiromantic person into the mix either. And they’re done so well! Ace is such a fantastic character and the creator cared and understood the ace community to know what the hell an asexual demiromantic person is and how to explain it.

I don’t think I’ve ever seen a comic that’s even cared about romantics like this one does. It makes me teary just thinking about it. I don’t know how else to explain it but there’s just this tidal wave of relief and happiness and understanding constantly hitting me whenever I think about it. 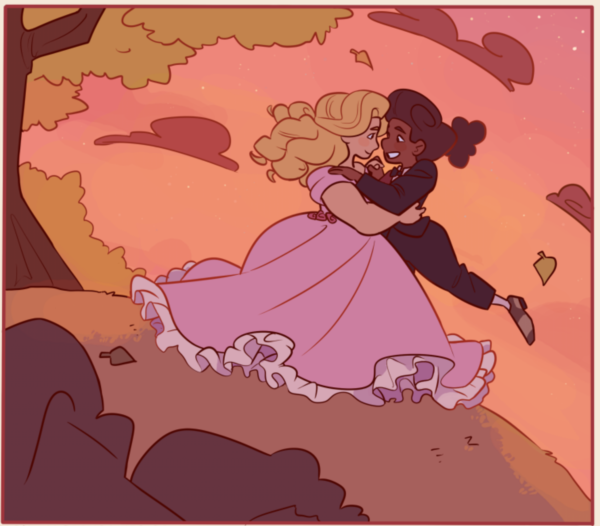 I think I might cry as I write this article, which is insane.

I love the characters so much. Not all of them get the most well-rounded arcs or the most screen-time, but I’d definitely say that the couples that do get the most time to develop – Connie and Carla, Clyde and Gene, and Ace and Rolly – are worth it. They deserve the attention because they need the most attention to allow the reader to understand them. 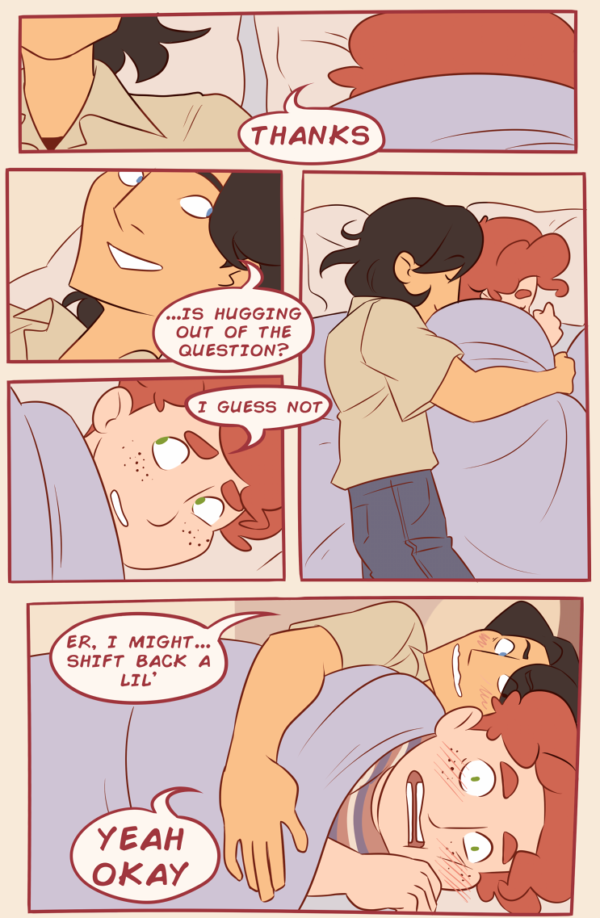 All of them are ace spectrum couples too. Carla is asexual panromantic, Gene is grey-a homoromantic, Ace is asexual demiromantic, and Rolly is demisexual panromantic. I’ve never seen an actually well done couple where one is ace, let alone two of them falling under the umbrella, and all three of the couples have at least one ace person in it.

That’s more representation than I’ve seen in a lifetime. 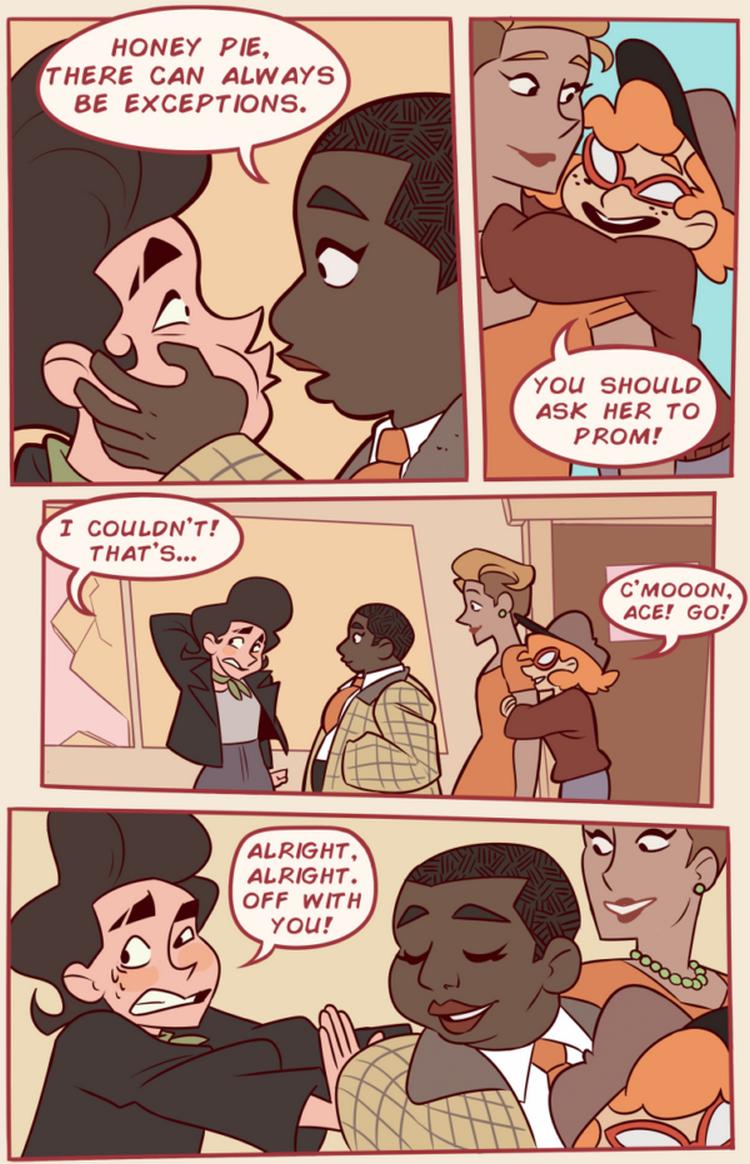 The brick by brick process of understanding each of these couples is superb. Someone could definitely understand all six of these characters as they learn about who they are, what their sexuality is, what sexuality means to them and their partner.

Since it’s the 50’s, so there aren’t exactly well-versed terms for any of this for these characters, but they all seem to come to the conclusions that fit them even if they don’t have the word they’re trying to work out. 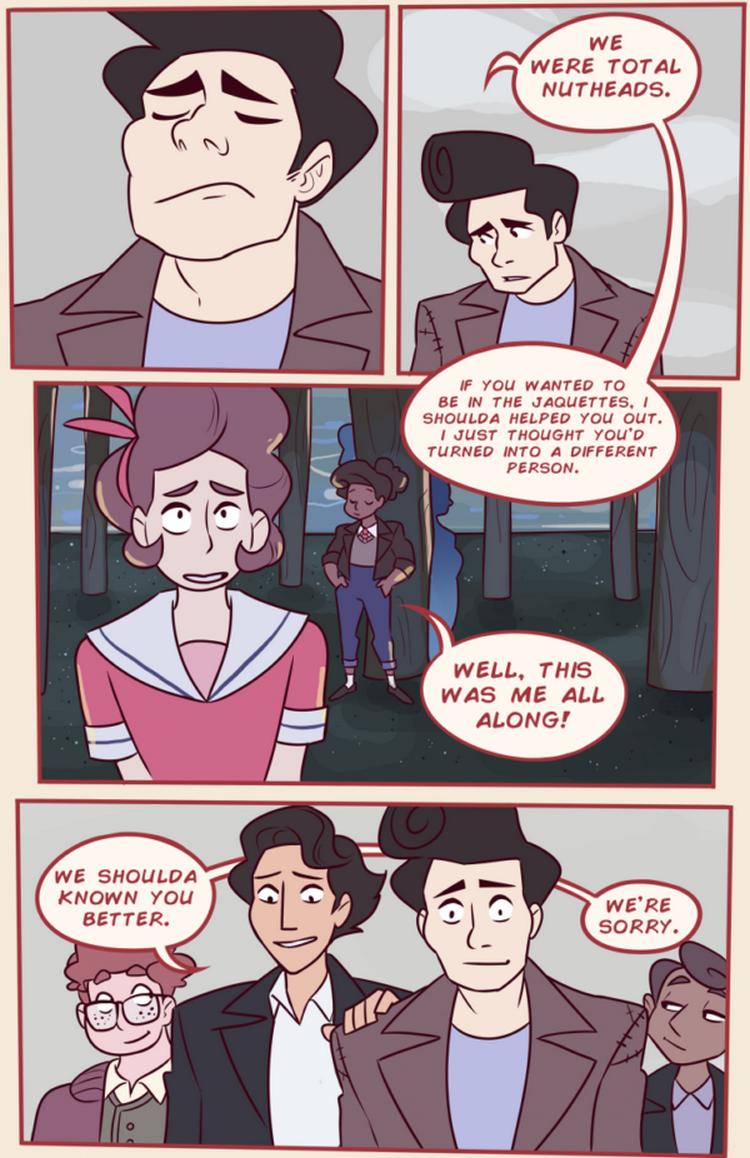 I’m just so stunned that there’s this much ace representation in a comic. I’m almost wary about how much demi representation there is, it almost feels like someone’s going to pull the rug out from under me and this was for some cruel hidden camera show or something.

I’m not sure how to explain what it feels like to realize just how low your standards are for whatever you watch in terms of seeing yourself in it after seeing something with all the representation. I don’t know the words. I don’t know. I’m definitely sure other communities get this. 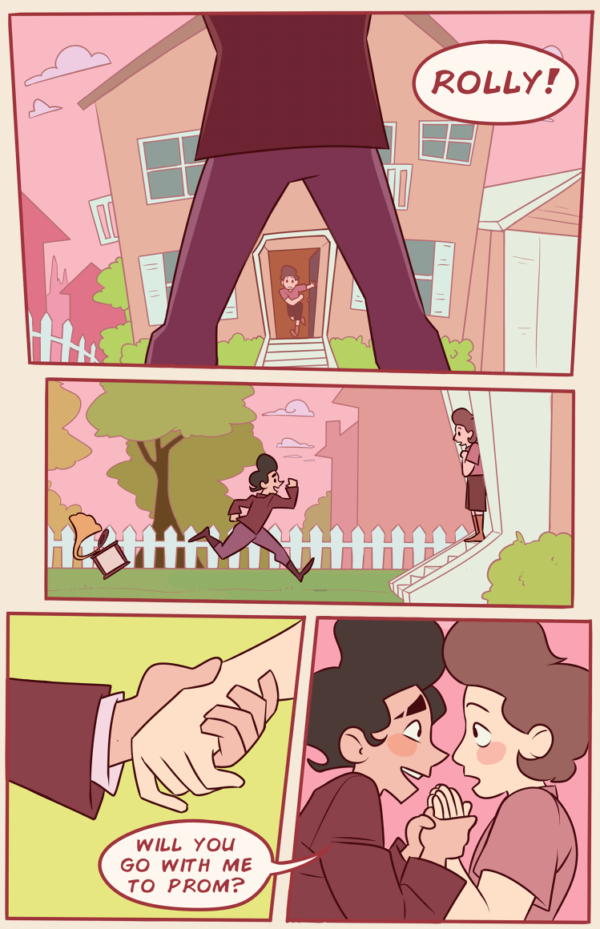 It almost feels like a curse, even, because I look around in this desert of very little to no ace or demi representation and now I’m parched and it all kind of hurts more, even if finding this feels like the best thing ever.

But it really isn’t a curse. It’s this beautiful comic that makes me feel like I’m not crazy, that there are others out there in the ether. I’ve only started to meet more ace and demi people out in the wilds of real life, and seeing myself in a comic…I don’t know, I think I’m crying again, I’m sorry.

Read Rock and Riot. Please. Please read it. It’s a beautiful, well-written, fun comic that both breaks and heals my heart. I’m getting all gushy. I’m sorry. Just go and read it. You can check it out here. 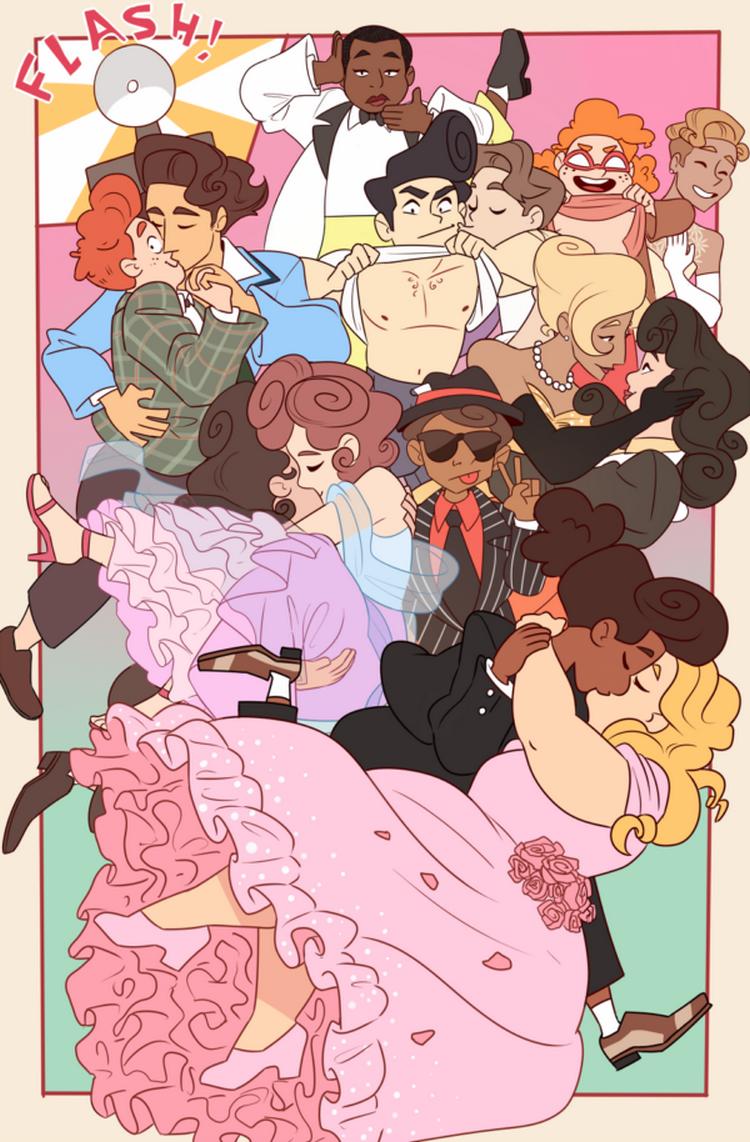 If you have any thoughts on Rock and Riot or have a creator I should try reading, please, email me at mexigremillion@gmail.com. Who knows? Maybe I’ll talk about your thoughts or read something by that creator!