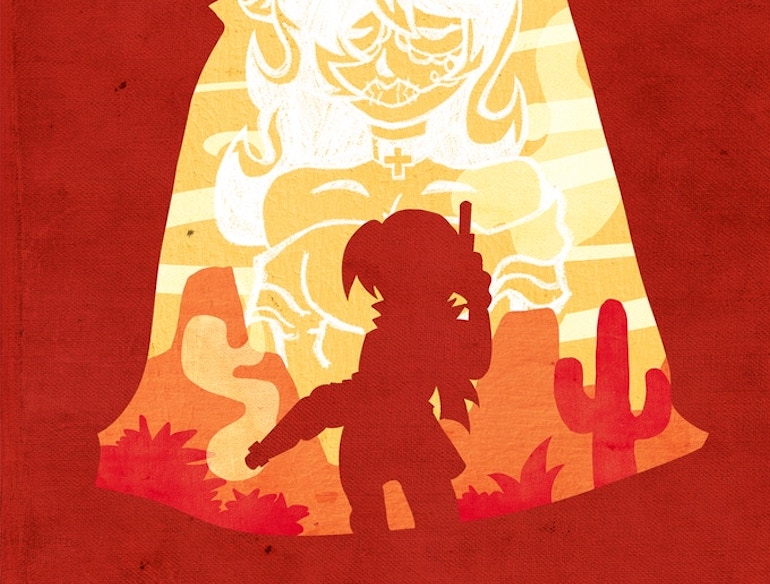 Fat and lazy drunks or sweaty and ugly villains are about the only ways you usually find Latinx characters portrayed in Old Western movies. That is, when they weren’t white-washed out of the picture altogether. Comic book artist Alé Juvera (Xeno-Guardian Red Visor GO!) , however, wants to change that. “It always bothered me that Westerns, even ones not made by Americans, always demonized Latinx characters,” Juvera says. With his recent successfully crowd-funded comic book Lost Heaven Juvera seeks to tell a story set in the old west with plenty of positive Latinx influences.

“While tracking a bounty to the small banking town of Lost Heaven, Veronica, a lone gunslinger, winds up with a bounty on her own head. Struggling to keep herself alive, Veronica is never sure of what is real or who is on her side. Death seems to be knocking on her gravestone around every corner.”

I spoke with Juvera to find out more about his inspiration for the creation of this tale and his influences as an artist.

Chris C Hernandez: What inspired the story of Lost Heaven? How long have you been developing it?

Alé Juvera: Lost Heaven goes pretty far back to a story I was working on in high school. My girlfriend at the time, who was also an illustrator, got me into Firefly, the Joss Whedon Sci-Fi series. We turned ourselves and friends into a crew of a starship and made adventures. Eventually I decided to take the comic in a different direction and attempted to rework the story several times over while. At one time Lost Heaven was this big epic Sci-Fi story about an army of androids launching a religious crusade. 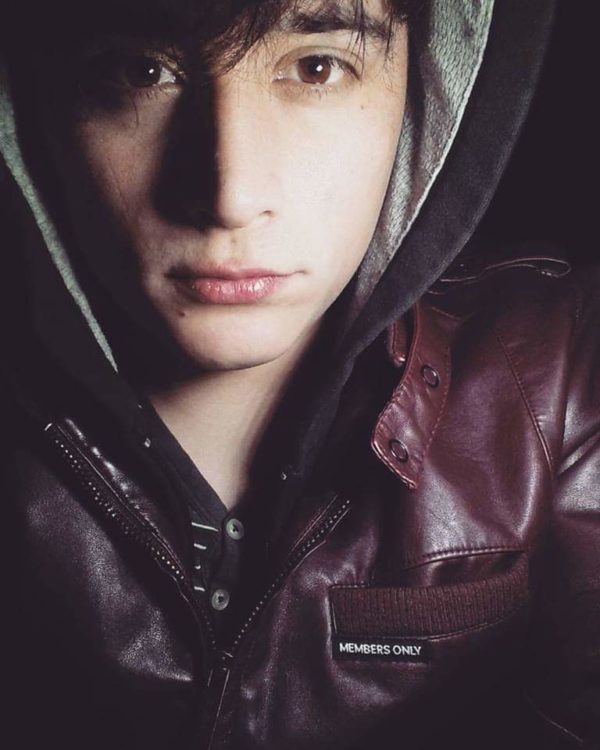 CH: What led you to bring to life Veronica and make her the main character of a classic western story?

AJ: So i mentioned that it used to be this big Sci-Fi epic, but the problem was that I could never figure out a way to fit Veronica or the other characters in the story. I always had the larger story, but not the smaller story. I eventually shrunk the scope and turned her into this lone bounty hunter/gun for hire type character. At the time, I was playing with the ideas of a spaghetti western comic too. I’ve always loved the dichotomy of the western hero being like an American samurai, and I love all the themes and music associated with it. Thinking about how many Sci-Fi comics existed, and how little spaghetti western comics did, it just felt natural to create that into the setting. As far as Veronica, as I said before, we based the characters on ourselves in high school, and so my ex-girlfriend was kind of the basis! Luckily, we’re still friends, and she’s probably my biggest supporter on this project 🙂 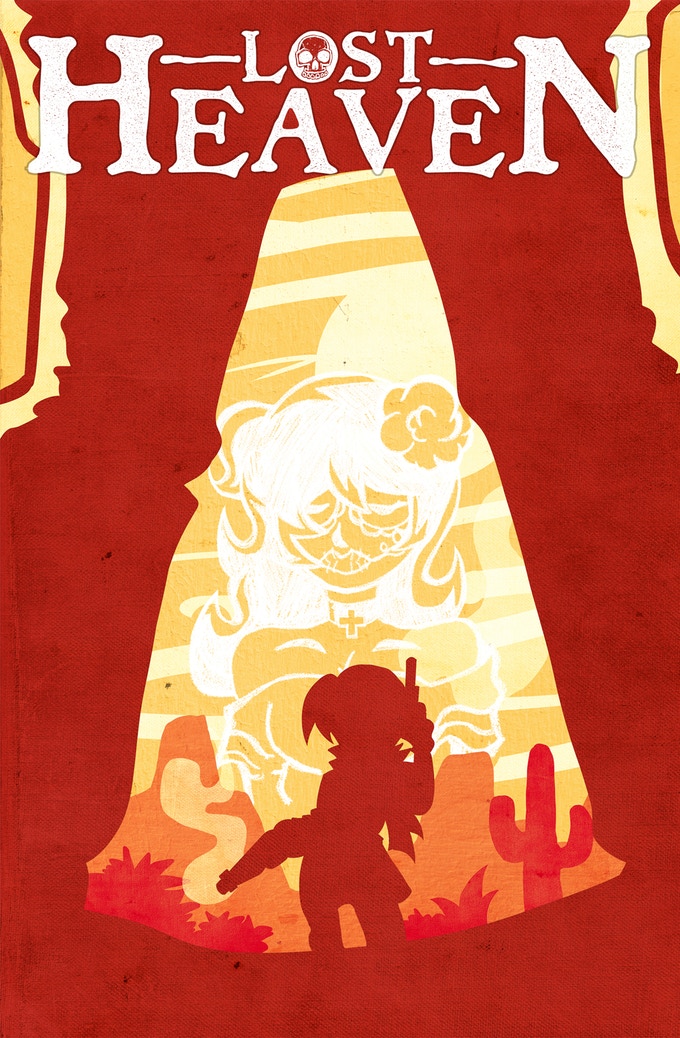 CH: La Muerte looks very beautiful and yet very mysterious. Without spoiling anything what can you tell us about her and her relationship to Veronica?

AJ: Well both my writer and I wanted to focus on aspects of diversity, being a POC myself, and Ellis LGBT, we both wanted to have our takes of that in the story. Originally in the Sci-Fi version of Lost Heaven, I was toying with the idea of having the grim reaper follow Veronica around, and when adapting the story to the western setting, it just made sense to make the grim reaper La Muerte. I describe their relationship as intimate; La Muerte describes Veronica as “La Mano De La Muerte”…The Hand of Death.

CH: What aspects were important to you when including a Latinx influence in the West?

AJ: I was originally born in Southern Arizona, so to me, the “West” and Latinx culture always seemed to go hand-in-hand, but it always bothered me that Westerns, even ones not made by Americans, always demonized Latinx characters. They were ugly, rude, and usually a bad guy or a bandit, despite the setting even taking place in Mexico. To me, themes of death and westerns mix very well, and so characters like La Muerte helped bring the aspects that I find most fascinating and unique about Latinx culture to the comic. One of my favorite movies is Desperado, and I loved how it was this modern Mexican western, and I loved that idea of this really cool Latinx gunslinger, so the end of the comic introduces one of my favorite characters that I haven’t talked about too much, Fernando. Javier Hernandez did a really cool variant of this character! He’s a guitar wielding, mysterious masked Gun Slinger. Music is very important to me, and I’m actually a musician myself, as well as my great-grand father was too, and that’s why I really wanted a character like Fernando to be a part of the story.

CH: What inspired the style of artwork for Lost Heaven? Did you find it difficult to go from illustrating Red Visor Go to Lost Heaven?

AJ: So I’m a huge fan of Darwyn Cooke and his comic The New Frontier. In that book, he threw out page layouts, and did these basic 3 panel page layouts, that made it feel like you were watching an old school wide format movie. I KNEW that was exactly what i wanted to do with Lost Heaven. I still hear people talk about how the comic still resembles an old school manga, which is cool with me, that’s how I’ve always drawn, but i like to think that a big difference between this and Red Visor is the scenery. Red Visor is about character expression, and with Catalina, I get to draw a lot of fun emotions, but with this being more of a tragic story with less comedy, I got to take more time on the environments and build the high desert. I based the scenery on where I grew up in southern Arizona, and so I really wanted to make it out how I felt when i was a kid exploring, riding my bike pretending it was a horse and I was a gunman.  That being said, with the wide panels, I got to do some really intense close ups. Sergio Leone and his movies like Fistful of Dollars really inspired me to play with the cinematography of the comic. I wanted it to feel like a movie when reading.

CH: How did you put together your creative team for the book?

AJ: So my creative team is kind of a lucky one, as it’s really my closest friends. My writer Ellis has grown up with me for the last 10 years, and has seen me develop Lost Heaven since it was the weird Sci-Fi story. I told them what I wanted to do with the story, who the characters were, and they were able to organize my thoughts into a cohesive script, I really love the way we work together. My editor and letterer are the same person, Jeremiah Lambert. He also did the same work for Red Visor, and is an amazing artist. He’s from the same town I was living in for a while back when I lived in Illinois. We traveled in a caravan of artists who did cons together, sharing the expenses and making good memories. It was through him and a local event we had in Peoria, called ACE (the Artist and Comic Expo), where I met Zac Atkinson, who is a full-time colorist, and he began to travel with us. He was the first person I asked about coloring Lost Heaven, and I was able to hire him, and he’s taken my art and made it look like it was someone who knew where they were doing! I’m really fortunate to have the team that i do.

CH: Will this be an ongoing series?

AJ: Absolutely! We have the next issue planned out and already are on the scripting phase! So hopefully mid quarter after Red Visor #3, we will release Lost Heaven #2!

Find out more about Lost Heaven on it’s Kickstarter page!