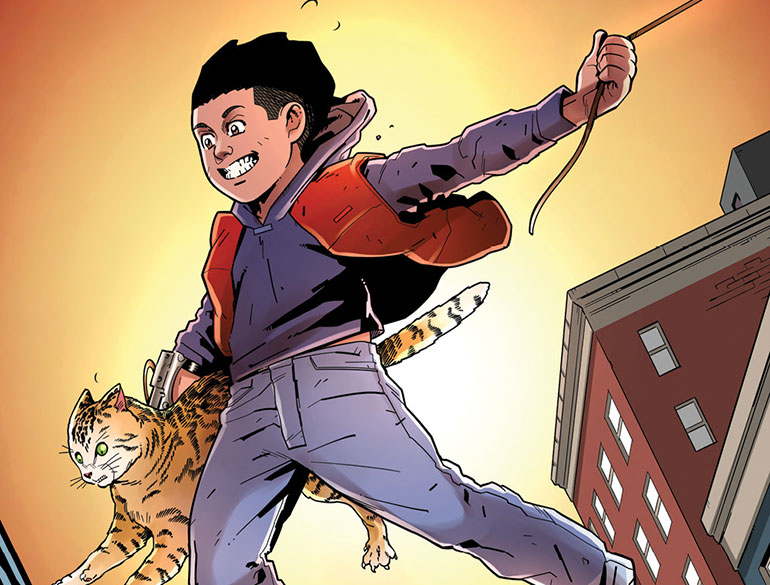 You more than likely have already heard new comic book writer Anthony Mendez before even if you haven’t heard of him. Voice-over actor Mendez is the famous voice of the Narrator in CW’s hit show Jane the Virgin as well as voicing King Juan Ramon in Disney’s show Elena of Avalor. While Mendez uses spoken words to bring to life famous characters on screen he is now using the written word to bring to life characters on the page.

His recently released Pedro & Miso #1 (online through Comixology) tells the story of a young boy who apparently lives alone on the streets. Accompanied by Miso, a street cat he has conversations with, Pedro uses his street smarts as well as some very impressive book smarts to survive and become a hero. Mendez talked with me about his first comic book endeavor and revealed some of the deeper meanings in the story. 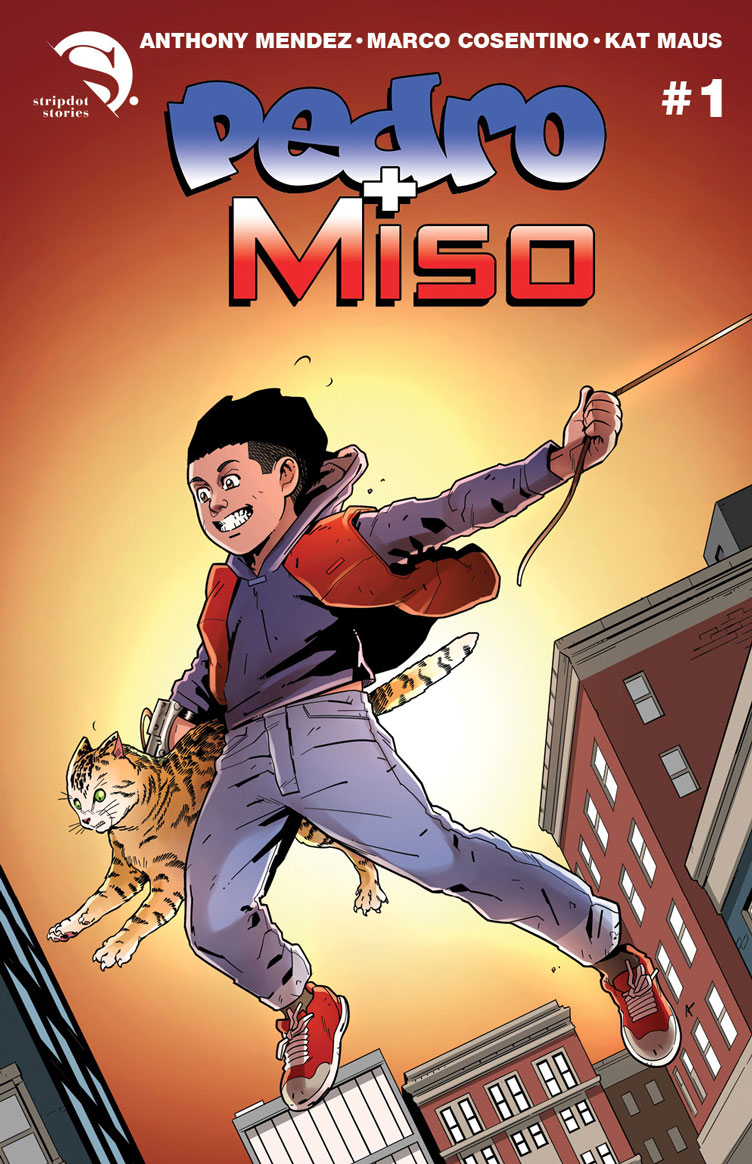 Chris Hernandez: What has been your relationship with comic books?

Anthony Mendez: My first comic was a 1973 issue of Swamp Thing. I was born in ’73. So, there you go. All jokes aside, I didn’t start seriously buying them until I saw McFarlane’s pencils on Amazing Spider-Man #298. Blew me away! Then #300 and #301 came along! Whoo! Something to behold. I didn’t care about writing at the time. Just the art.

CH: What has been your experience or what are your thoughts about Latinx representation in  comic books?

AM: I’m not as concerned about seeing Latinx characters in comics as I am about supporting Latinx’ and all POC’s voices behind the comics. If we do that, we’ll naturally see more of our stories. It’s a good time for that with the rise of indies and no-capes. 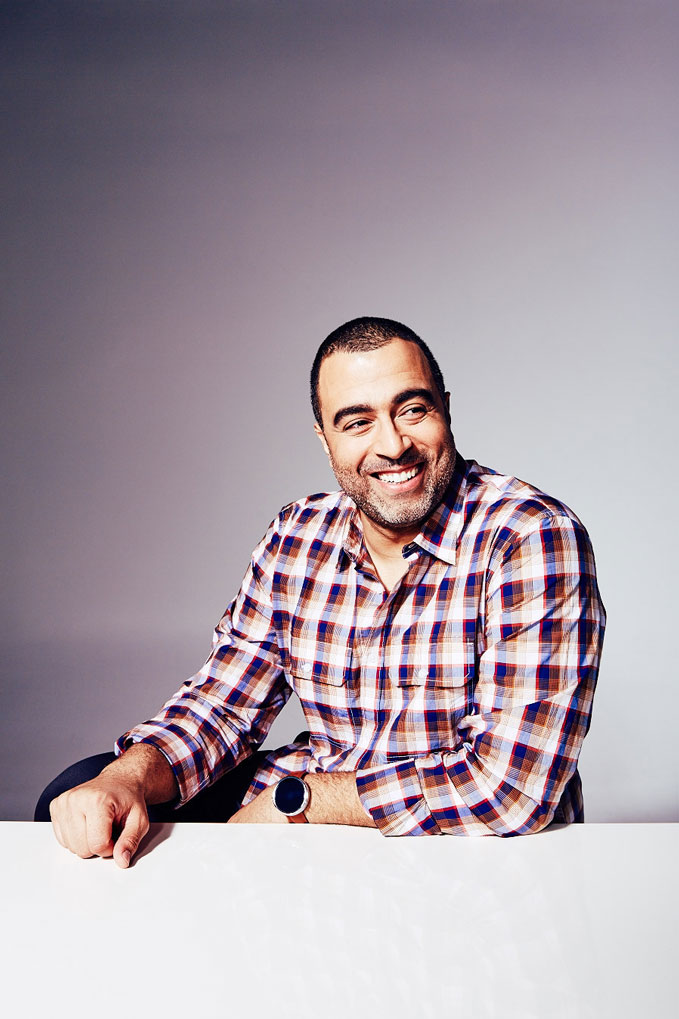 CH: What inspired the idea for Pedro & Miso?

AM: I was a shy kid in Washington Heights, so I used my imagination to escape. I once found a ski mask and popped some lenses in them to become a “superhero.” I called myself Web-Kid. Ha! That idea inspired Pedro. Miso came about because I initially wanted him to be a bodega cat. But I needed him in the streets for the story to work, so he evolved into Pedro’s street-cat sage. Maybe I’ll write a bodega cat comic. Bodega cats can use some love.

CH: The cover for Pedro & Miso #1 is a clear homage to another famous swinging hero. Why did you choose Amazing Fantasy #15 to connect with?

AM: While the first era change, to me, was marked by #297, as I’ve said, the initial era change was with Amazing Fantasy #15. How could I resist not paying homage to it on the cover… and yeah, I know, it’s been done to death, but it’s that important to so many people. 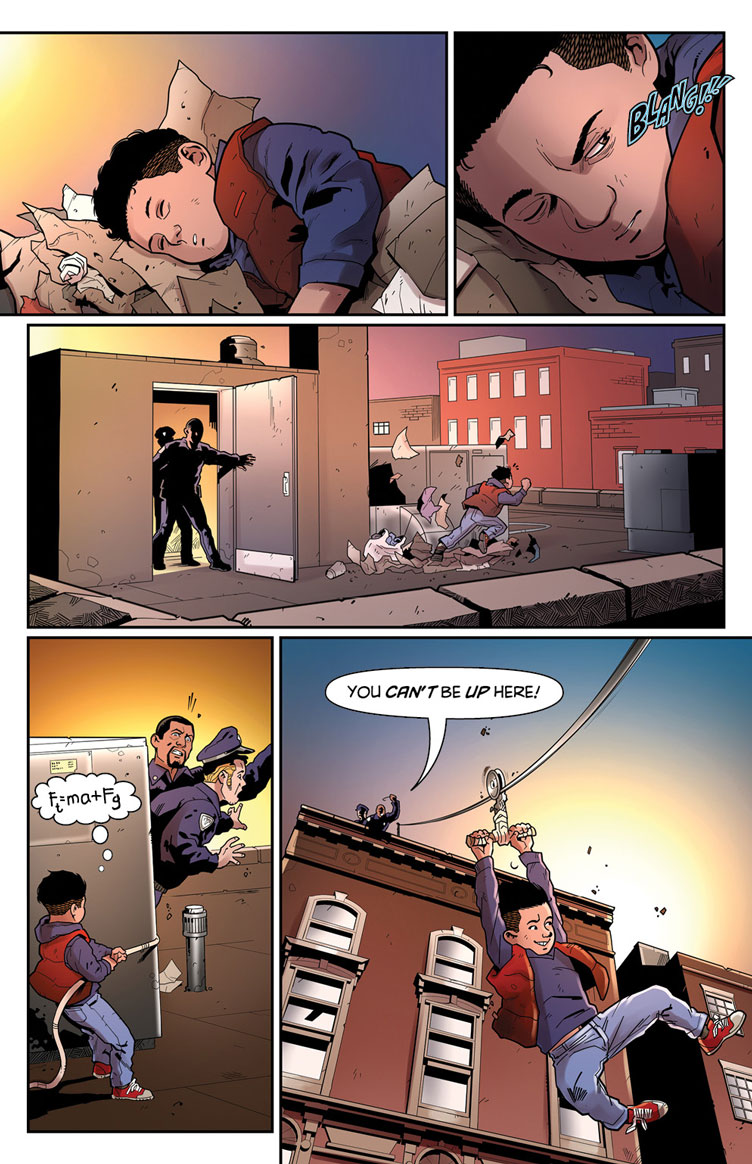 CH: What can you tell us about Pedro’s powers or abilities? Is he super powered or just really smart? Does Miso have powers or is it Pedro that understands his cat?

AM: I can tell you that Pedro has an incredible imagination and, yes, he’s smart. In #3, we get a glimpse of how he sees himself. Miso is just a cat, but not for Pedro. That’s all I can say for now. He has his own story and we’ll learn more about it in issue #3, as well. 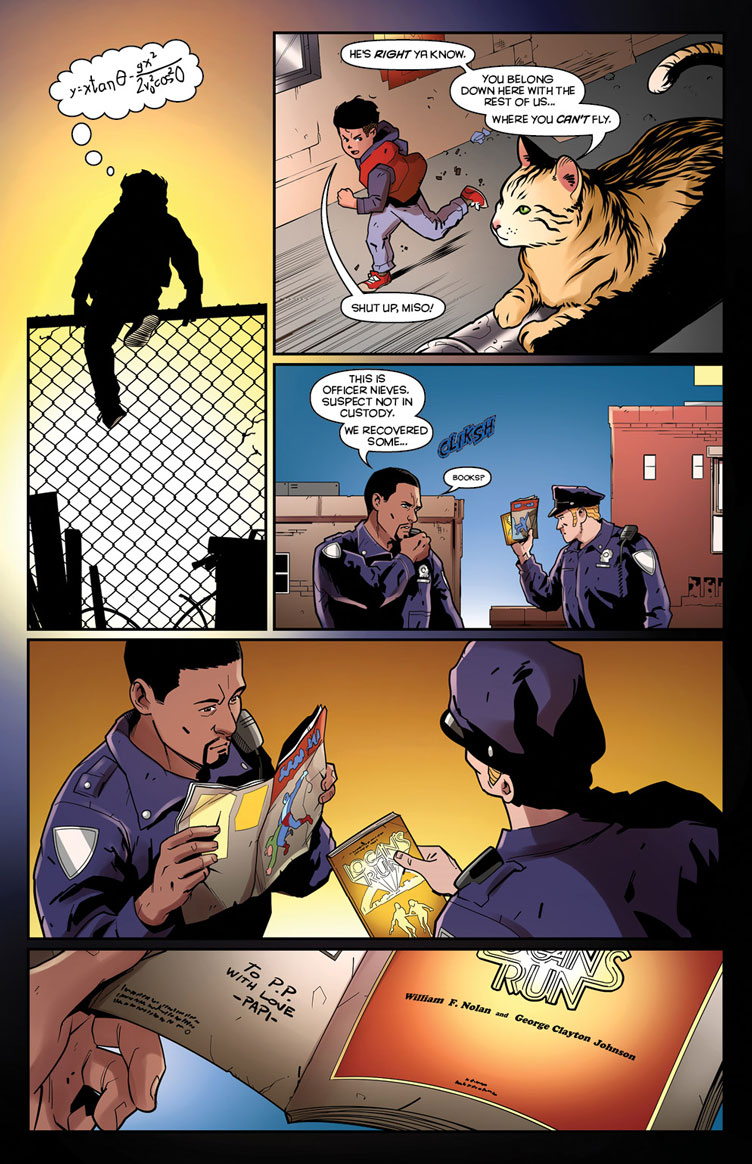 CH: One of the books that Pedro carries with him is Logan’s Run. Why did you  choose  this classic story?

AM: I’ve loved it since I was a child. It speaks to a society where the powers that be understand the dystopia that they have contributed to yet sell to a certain part of the population a different, idyllic story in order to control those from whom their agenda doesn’t benefit. Like Pedro, I didn’t see it as a kid, but that story will always be relevant. However, in issue 2, something happens where the book no longer holds importance for Pedro. It’s quite sad but allows him to grow.

CH: Classic  origin  stories like Spider-Man’s  have the hero living with a loving family and upholding the law, Pedro’s story is quite different. Why did you give him this path to becoming a hero?

AM: I wanted to establish the reality of Pedro’s solitude and how that informs who he is as a survivor. Any child of color growing up in an urban environment is a survivor. But in terms of not being law abiding, we also learn at the end of this first issue that Pedro is not just doing this for himself. However, there could be repercussions for his actions. In terms of “family,” we’ll see by issue #3 how that might change for Pedro (and Miso). 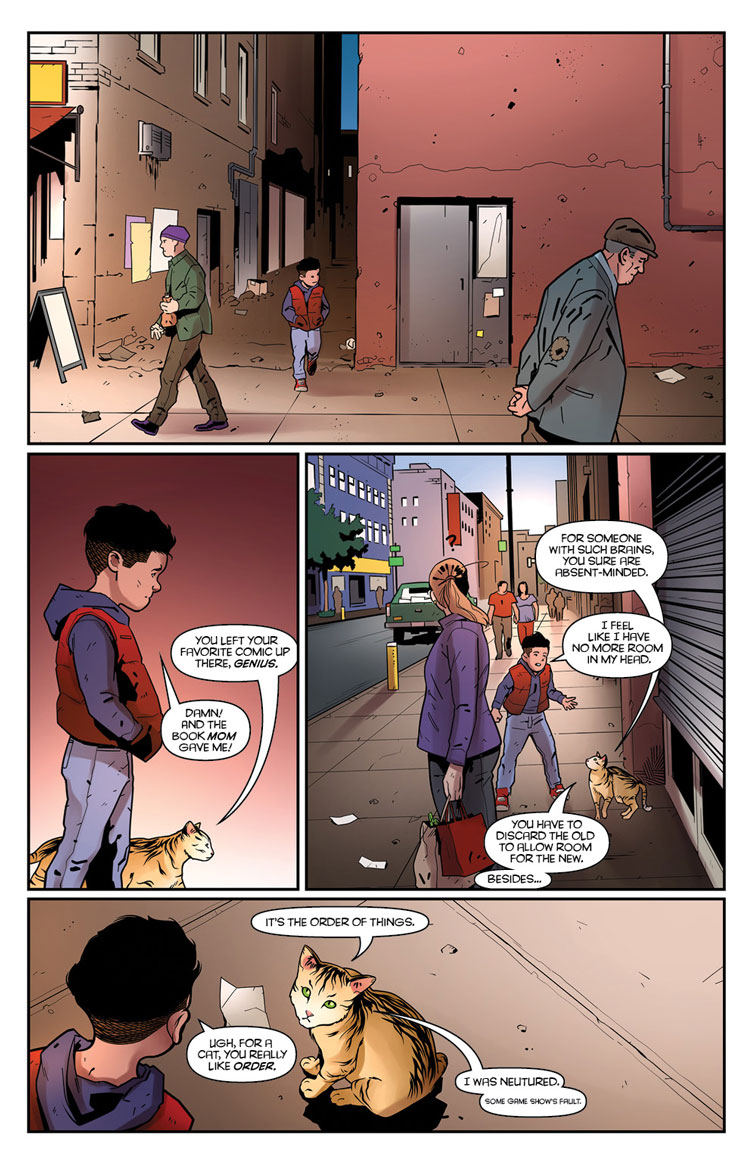 CH: Is Pedro & Miso a limited series or would you like to see it as an ongoing story?

AM: It’s as limited as my budget. Ha! I didn’t do Kickstarter, so I’m funding it. I intend to start with this 3-issue arc that sets up a possible ongoing series for Pedro and Miso. But I like the idea of having 2-, 3-, or 4-issue arcs stand on their own that hint at the future. 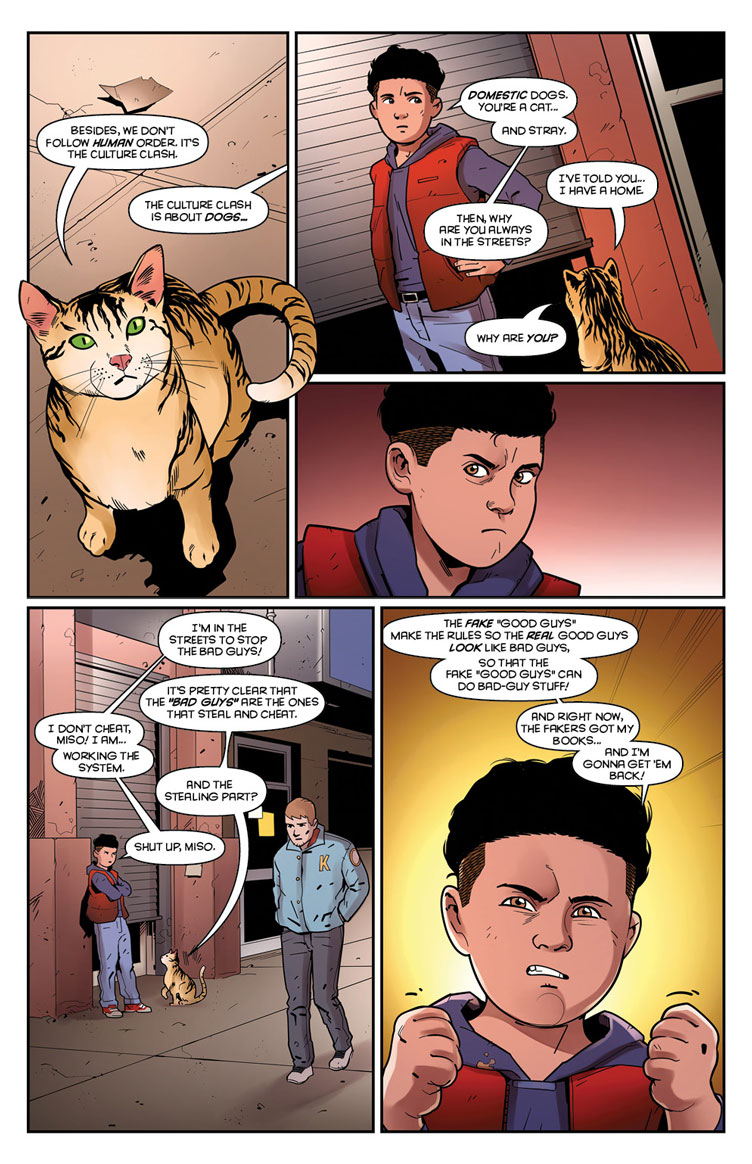 CH: What do you hope that readers will come away with after reading Pedro & Miso?

AM: First and foremost, I’d like them to be entertained. If they’re inspired, then that’s a plus. I have no expectations beyond simply a personal need to tell stories and a hope that readers will connect to it in their own way. That’s it.

CH: Besides comic books you’ve had a number of interesting jobs in the past: headstone business, Reggae producer, and of course voice-over  actor  for Jane the Virgin and Elena of Eleanor.  What does your family (parents, etc.) think of your career and where you are at today?

AM: To this day, I don’t believe my family, particularly my parents, have a true understanding of what it is exactly that I do. I don’t share my intentions or ideas anymore with anyone, because I follow my gut. Comic books, like voice-over initially, is not a business you get into because you want to be rich. You do it, because you love it! I try not to be misled by the “well-intentioned” opinions of others. 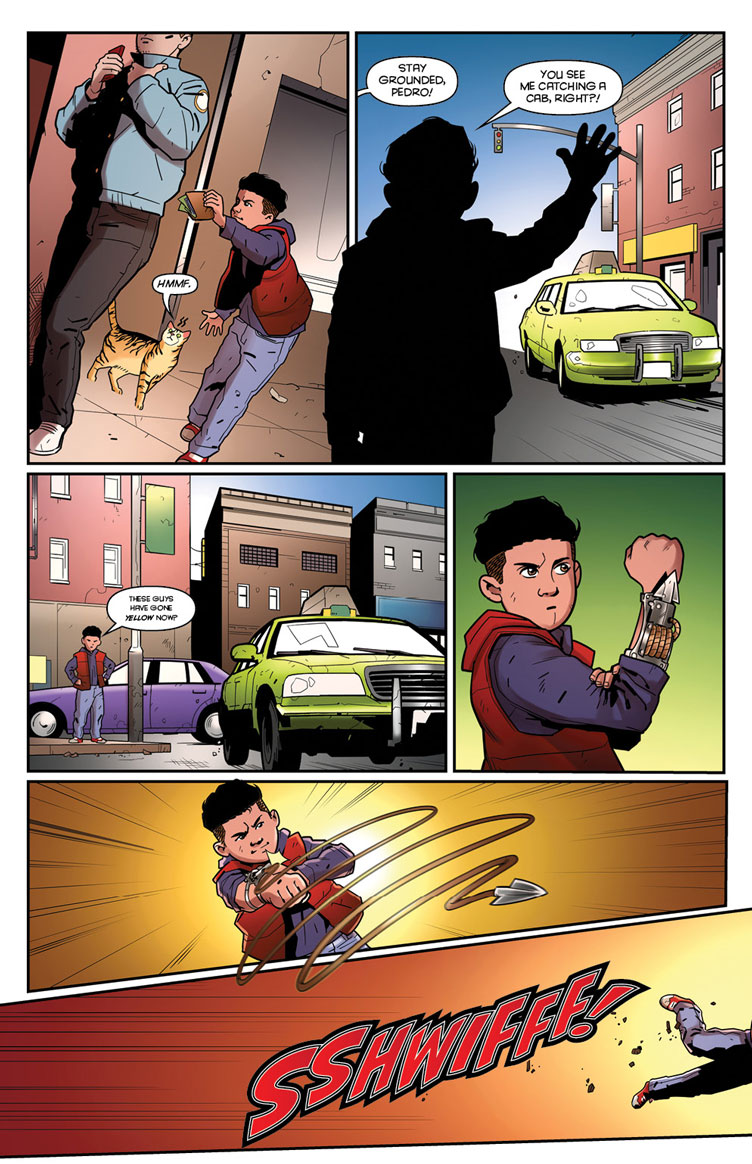 CH: I know that you have another comic  book  that you are working on releasing soon. Can you tell us about it?

AM: It’s called Mike Tomb: Unrest in Peace. It’s about a young headstone maker that inherits the family business from his late father with whom he was at odds. Along with his childhood friend, Salda, he discovers the power (and curse) of forgiveness. Despite supernatural elements (both him and Salda might have some powers – we see hints in the first issue) and a baddie that looks like Dominican dictator Trujillo, it’s really a story about family. Yeah, much darker than Pedro and Miso. Ha! That one will finally be out in the Fall.