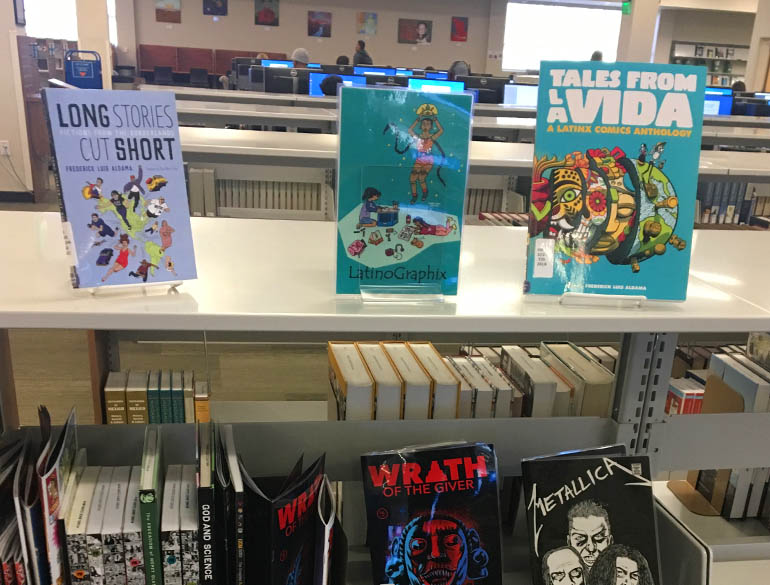 At Modesto Junior College in California, English Professor Dr. Theresa Rojas has started an important collection of Latinx Comics. What started as a reference collection in her office was enthusiastically encouraged by campus librarian Susan Cassidy and soon became “The LatinoGraphix Collection” with a home in the library. The collection already has sixty titles from creators such as Javier Hernandez, Jaime and Gilbert Hernandez, and Eisner Award Winner Dr. Frederick Luis Aldama. 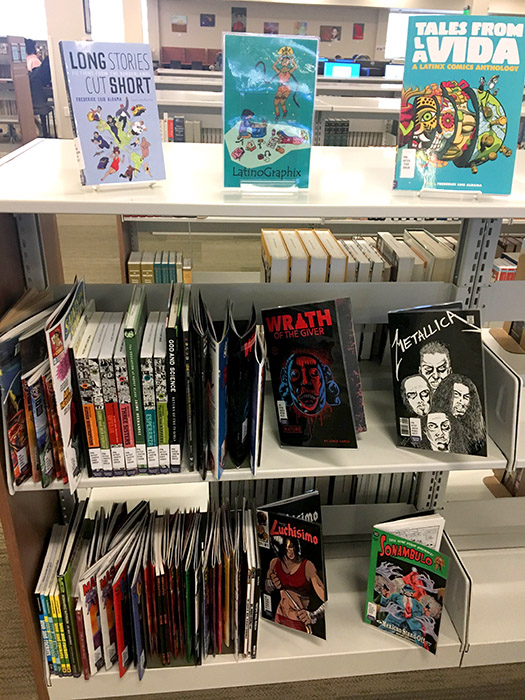 Dr. Rojas is one of a growing number of educators that are championing the use of comic books and graphic novels in curriculum. “By using comics in my classroom,” Dr. Rojas says, “we can discuss everything from visual and textual rhetorical choices to cognitive literary theory.” Her efforts are vital in sharing Latinx creators and their stories with students that in turn will take these stories with them into the world as they move on. Study of stories like those in this collection broaden our understanding about ourselves and the multitude of cultures in the Latinx world.

Dr. Rojas took time from her busy schedule to answer some questions about her own experience with comic books, the collection and her thoughts on the progress of Latinx comics. 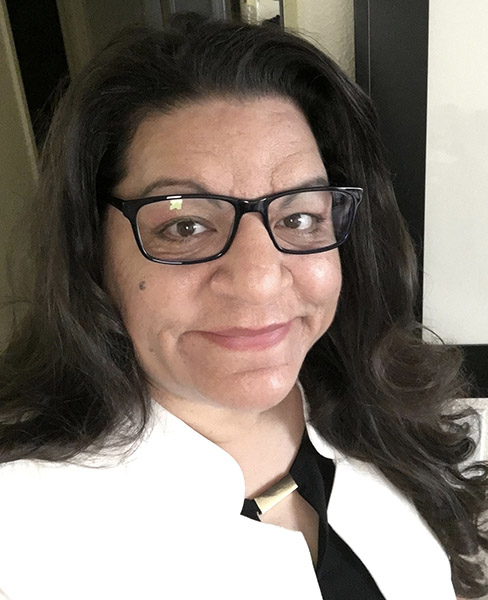 Chris C. Hernandez: Can you tell us a little about yourself?

Dr. Theresa Rojas: Hi Chris! Thanks so much for this opportunity. I’m originally from San Francisco and most of my family is in the Bay Area and Sacramento. I moved to the Midwest years ago and went to graduate school there. Now I’m back in California and I was excited to have the opportunity to work in Modesto where I’m driving distance from my family.

I’m a full-time English professor at Modesto Junior College where I teach literature, creative writing, composition, and comparative media for the Literature and Language Arts Division. The comparative media part is a nod to how I use comics, television, and film in addition to traditional literary forms in my classroom. It’s also the name of my department at MIT. I earned my PhD from The Ohio State University, but my last dissertation year was spent at MIT doing a special predoctoral program in Comparative Media Studies. That was magical. My entire job was to finish my dissertation. They asked me back for a second year to teach a class and to support me during my first year on the job market. I was incredibly fortunate to land the position in Modesto where I’m completing my third year.

I’m also an artist and a writer. I’ve exhibited my art work in group and solo exhibitions, including a giant show at the Columbus International Airport. I’m working on new pieces

and hope to exhibit again this year. Writing-wise, I’m working on a poetry collection that will be completed this fall, a short story collection about growing up in San Francisco, and an academic book on the intersection of Latinos, comics, and medicine. I have my first chapbook of art and poetry debuting at the Latino Comics Expo, Modesto!

My job is fantastic as everyone is incredibly supportive of the arts as well as the academic side. We have all kinds of talented faculty in my Division alone and folks make an effort to support one another by attending readings, exhibits, and openings. I’m the chair of a committee that does publicity and promotions and we just had a faculty spotlight event where I read new work, along with five of my colleagues in English.

I could go on for days, but I’ll stop there.

TR: I first read comics when I was super young. I can remember my mom buying me Archie, Richie Rich, and Casper from the Rexall on 16th and Mission in San Francisco. They had the spinner racks and one of my favorite things was to pick up comics and candy. My mom would always buy me a comic. A bit later, I remember noticing the photonovelas and small sepia comics in the Latino record shops like Discolandia on 24th. I don’t think I ever bought any, but I always looked at them when one or the other of my parents were record

shopping. Those books were a bit scandalous—always about some dramatic romance featuring buxom women along with men looking very macho. I didn’t really understand those at the time. As teenager I got into Catwoman and there was a horror phase where I was buying Eerie and Creepshow. I remember being super into Fangoria magazine as well. My family loved horror movies. I kept many of those, but stopped reading comics for quite a while until I was in graduate school, of all places.

In graduate school, my first adviser, who was an incredibly well-respected professor and scholar, would meet with me to discuss the progress of my program. At one point, I wanted to somehow bring together a number of major interests: Literature, autobiography, feminism, and visual culture. He said he had the perfect book for me to read and handed me a copy of Alison Bechdel’s graphic memoir Fun Home. I remember feeling a bit shocked that this professor was handing me a comic, but I trusted him and when I read it, it blew my mind. I wound up co-presenting on that book with a good friend and that was the beginning of an entirely new and generative direction for me.

I’m also an artist and whereas I started as a painter, I’m working on my drawing skills so that I can create better comics. Comics have become not only a way to bring together all of my major interests, but also an entry point to all kinds of studies for students. My career now heavily develops ideas of graphic narrative pedagogies. By using comics in my classroom, we can discuss everything from visual and textual rhetorical choices to cognitive literary theory. It also gives my scholars a way to express their own stories without requiring any fancy devices. Just paper and pencil and we’re off. 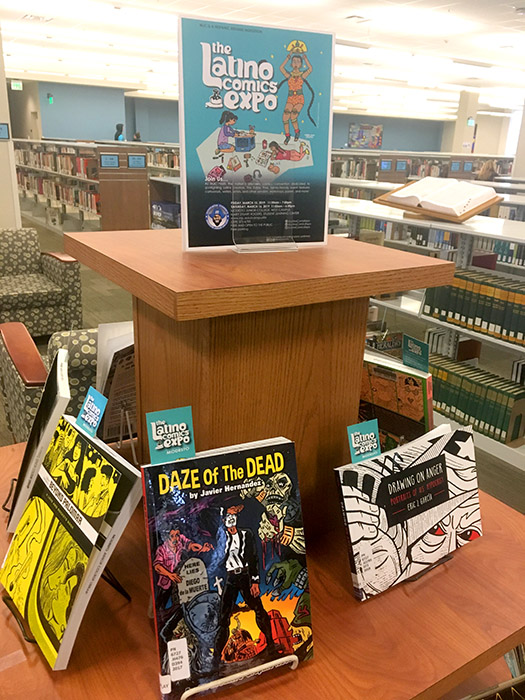 CH: You recently placed a call for submissions from Latinx comics creators of graphic novels to recommend for course adoption.  Can you tell us more about this? How would they be developed into a course?  Tell us about the Latinx Comics Reference Library you are putting together at the English Department. What lead you to create it?

TR: This idea sprouted from the upcoming Latino Comics Expo, Modesto. I’m working on the event with co-founders Ricardo Padilla and Javier Hernandez. I started a Latinx Comics Reference Collection in my office on campus, putting a call out to folks who might be attending the Expo. The idea was to have artists and writers of Latinx comics (by and featuring Latinxs) send texts that I could share with colleagues, possibly adopt for courses, and eventually recommend for purchases to start a collection in our main library. I also wanted to just get more of an idea of what’s out there, particularly in terms of work by indie creators.

What happened was unexpected. Originally, I thought maybe some time in the future I could propose that we purchase a few texts to seed what I wanted to call “The LatinoGraphix Collection” in the library. I projected that it would take a couple of years and we’d have to start with donated texts and perhaps apply for funding. When I proposed the idea to Susan Cassidy, our Librarian and liaison, she said let’s do it! I mean she literally said YES to starting it right away. My Dean, Jillian Day was also on board and has been supportive of so many new things, particularly as they help our Latinx students see themselves reflected as creators and strong characters in literature. One of the reasons I find Latinx comics so compelling is how they bring to light the vast possibilities for representing both our diverse realities of the world and fantastic creations. There is no monolith of experience or look. The word “diverse” doesn’t do us justice.

Long term, I’d like to develop a Comics Studies literature course that combines both the study of and creating comics. I do some of this in class already. There are possibilities for multiple courses, even—perhaps involving tandem teaching with the Art Department. I’ve already gauged some interest with a colleague. These courses take a while to develop, so this is certainly a longer-term wish list kind of thing. The important part is that the collection will give these texts a wider audience.

CH: Are you currently using graphic novels in your courses?

TR: Absolutely. I use comics in every course I teach. I often use full graphic novels or trade paperbacks, sometimes webcomics, and more recently anthologies and single issue comics. Those are a bit more challenging to get a hold of for multiple sections of an entire course, but not impossible. There are some sections where ALL of my texts are comics and others where I have a unit on what we call graphic narrative. For example, in my recent Introduction to Women’s Literature course, we read Octavia Butler’s Kindred and then later in the semester tackled the graphic novel adaptation by Damian Duffy and John Jennings. The two were kind enough to videoconference with my class. In my Chicano Literature course last semester, we had an entire unit on graphic narratives as innovative texts. There, we read Alberto Ledesma’s hybrid graphic memoir, Diary of a Reluctant Dreamer as well as a single issue of Border Town. I think of these kinds of texts now as critical literary experiences and they offer a rich pool for my students to dive into analytical thinking and writing. 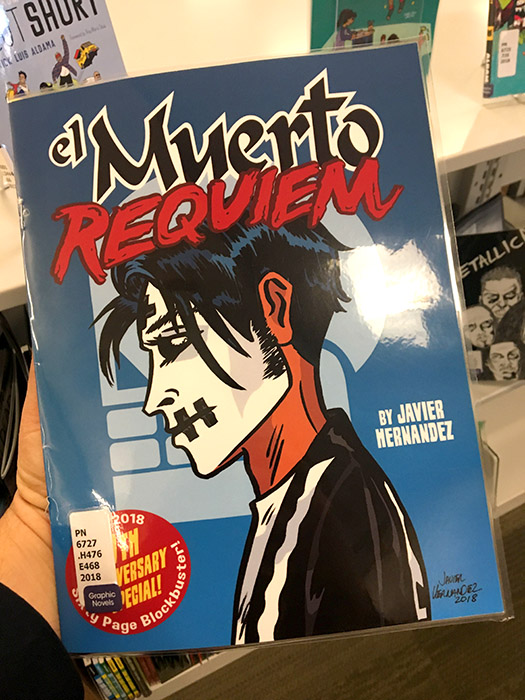 CH: How would you gauge the current state of Latinx in comics?

TR: There is no better time to be a comics creator, particularly if one is thoughtful and innovative. We don’t have to deal with things like the Comics Code or restrictions on subject matter. We can tell stories about anything and in every genre: Auto/biography, fiction, mythology, comedy, superheroes, science fiction, fantasy, health, you name it. The more stories we tell, the better. As an academic, we are in a boom time as well. The growing recognition of comics and the possibilities therein allow us to bring this work into any field. One of my specialties is graphic medicine, which is the intersection of comics and health. Graphic medicine explores everything from stories of illness to the construction of materials that help patients understand elements of self-care. This is a growing area of comics that bring together medical practitioners, comics enthusiasts, and academics, among others. It’s also a field that encourages us to tell stories that would otherwise remain hidden, given the taboo of revealing weakness or “airing dirty laundry.” Graphic medicine helps people realize they are not alone and in fact dealing with medically-related issues is universal and complex. It’s not just a Latinx thing, it’s a people thing.

As I send this off, I’m about to host the 9th Latino Comics Expo. We have 54 tables of comics creators and artists with works by and featuring Latinxs. We’ve never seen anything like it in Modesto. I’ve heard we’ll have people traveling from hours away for this, so that tells us that there is both an interest and a need. My hope is that it will prove a transformative experience both for our creators exhibiting and our students and community attending.