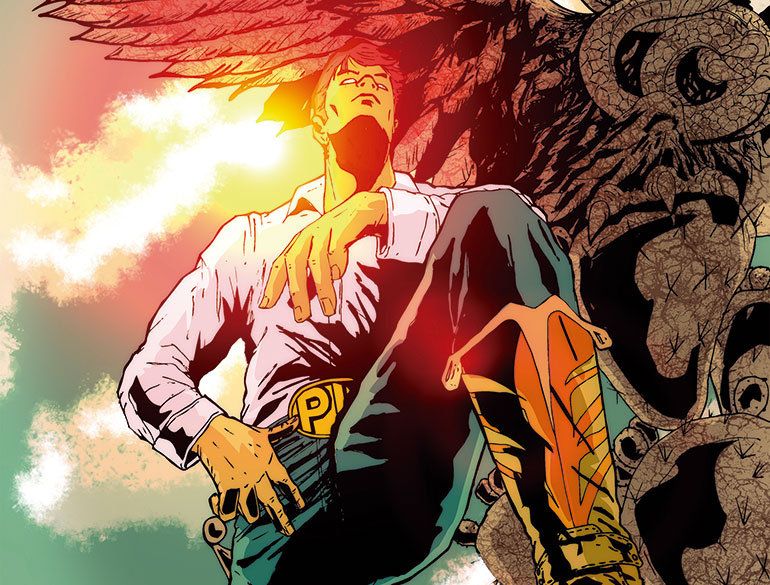 “Cartel fights back after boss killed in Reynosa; City hammered by gunfire and exploding grenades on Saturday morning,” reads a recent headline about the Mexican border town of Reynosa.

It’s not a TV show, action movie, or even a comic book story line, this is real life.

If it were fictional then the call would go out to a hero like Superman or Iron Man, but who do you turn to when the danger is real? This is when it’s time to turn to real life heroes like Hector Rodriguez, who created a Latinx super hero called El Peso Hero.

Rodriguez doesn’t have super powers and he isn’t in the armed or police force but he is an elementary school teacher from Dallas, Texas. Rodriguez’s super power is the ability to create. He created El Peso Hero for others to look to, be inspired by and to bring hope in oppressive times. By doing so he has proved himself to be the real hero. Without someone to look up to for hope, kids face the danger of perpetuating the violence and adults stumble forward without levity to relieve stress. 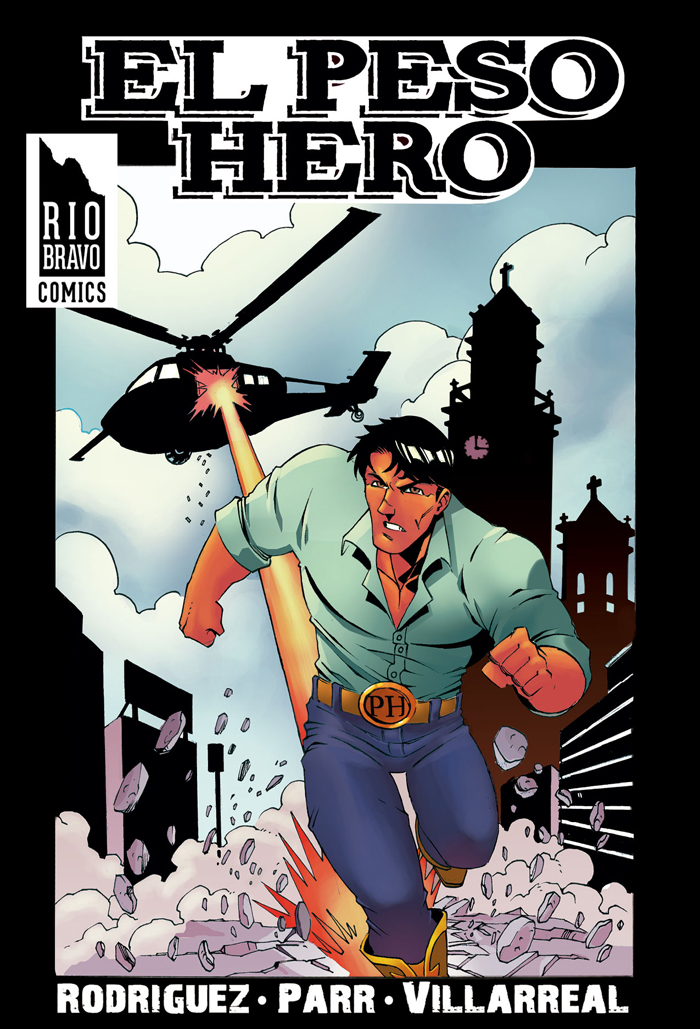 Rodriguez created El Peso Hero in order to tackle the problems that Latinx people along the Texas/Mexico border are facing. Issues like drug wars, corrupt officials, and immigration troubles aren’t usually dealt with by mainstream heroes like Superman or Batman. El Peso Hero does though. With invulnerable skin and a humble heart El Peso Hero fights for the people. I had the opportunity to talk with Rodriguez about his creation and his thoughts on current Latinx super heroes.

Hector Rodriguez: El Peso Hero is a comic book heavily influenced by the modern-day challenges people from both sides of the U.S.-Mexico border face. Defender of immigrants, the hero to the disenfranchised, and growing vexation for the Mexican cartels, corrupt officials and human traffickers, El Peso Hero makes waves along the border.

As a young boy, El Peso Hero assumes his powers of super strength and unbreakable skin by accident and reluctantly enters the role of hero for the unseen and unheard. Through the unintentional influences of his family and community, El Peso Hero becomes aware of the need for a local hero. Crime waves are sweeping the city, cartels have laid of the land, and El Catrin, the local cartel boss, holds the puppet strings to the local government officials.

El Peso Hero steps out to defend the powerless in the series El Peso Hero, influenced by the modern day realities of those living on both sides of the U.S.-Mexican border; the results of which are often destructive and deadly.

CC: All superheroes have a moment in their life where they are driven to turn into a hero. Was there a key moment in your life that led to the creation of El Peso Hero?

HR: The culture along the Texas-Mexican border is very different from the rest of our Latinix community. La frontera is a crossroads of cultures, ideas, and languages , the use of Spanglish is very common. While visiting my home town of Eagle Pass I came to the realization that there has never been a border superhero. So I began writing the adventures of a norteño Mexican superhero on the summer of 2003. My grandfather inspired me by his grit, determination, and strong sense of justice. He was a living breathing Peso Hero. 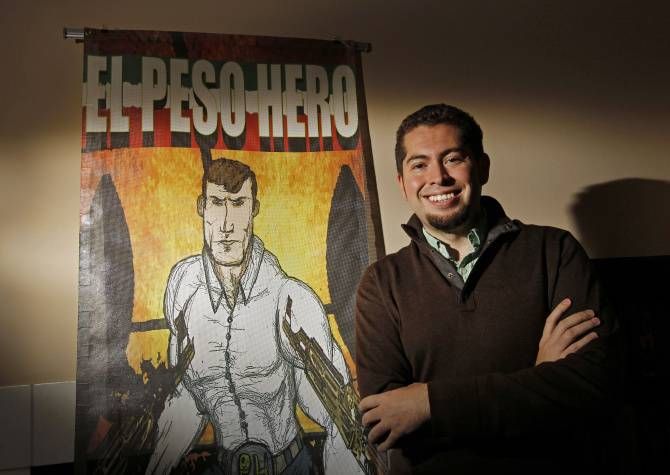 CC: Superman has been called a hero for all people. Why do you feel that it is important for Latinx people to have their own heroes?

HR: Representation matters. The Latino population in America is growing exponentially. It is projected that by the year 2050 Latinos will be the majority minority in Texas. This rapid population growth presents a unique set of opportunities and challenges that policymakers are in a position to address.

Latinos are not adequately represented in local, state and federal government. They are even less represented in comics, books, music, TV shows and movies. Latinos make up 25 percent of moviegoers even though they’re only 18 percent of the population. A comic book series like El Peso Hero brings attention to important issues and help bridge the gap of representation in media. El Peso Hero is relevant and Latino readers are emotionally invested in the stories.

CC: What do you think about some of the other “mainstream” Latinx superheroes like America Chavez or Miles Morales.

HR: Deep down within the editorial staff, Marvel has an issue with real diversity. To them, representation is a money making short term opportunity. I started following America Chavez but then her origin became mainstreamed… they couldn’t keep America Chavez a real Latina for long…I feel conflicted. That’s why the indie scene is so important. The indies are at the forefront of storytelling. Storytelling without borders.

CC: Superheroes can inspire so many reactions in real people from intense anger to great love. What do you hope that El Peso Hero will inspire in current and future generations?

HR: Hope. Determination. “Ganas” ( Give it your all, grit) Comic books are a universal medium that can cross borders and languages. With El Peso Hero we are telling a story of a Mexican man trying to give voice to those who are disenfranchised on the border. Help the immigrants who are victimized and discriminated. Changing the situation and fighting the wave of corruption is a huge undertaking. El Peso Hero is overwhelmed by this sense of duty and responsibility. His determination inspires does around him. He has superpowers that he uses for good but the landscape is wrought with moral ambiguity. 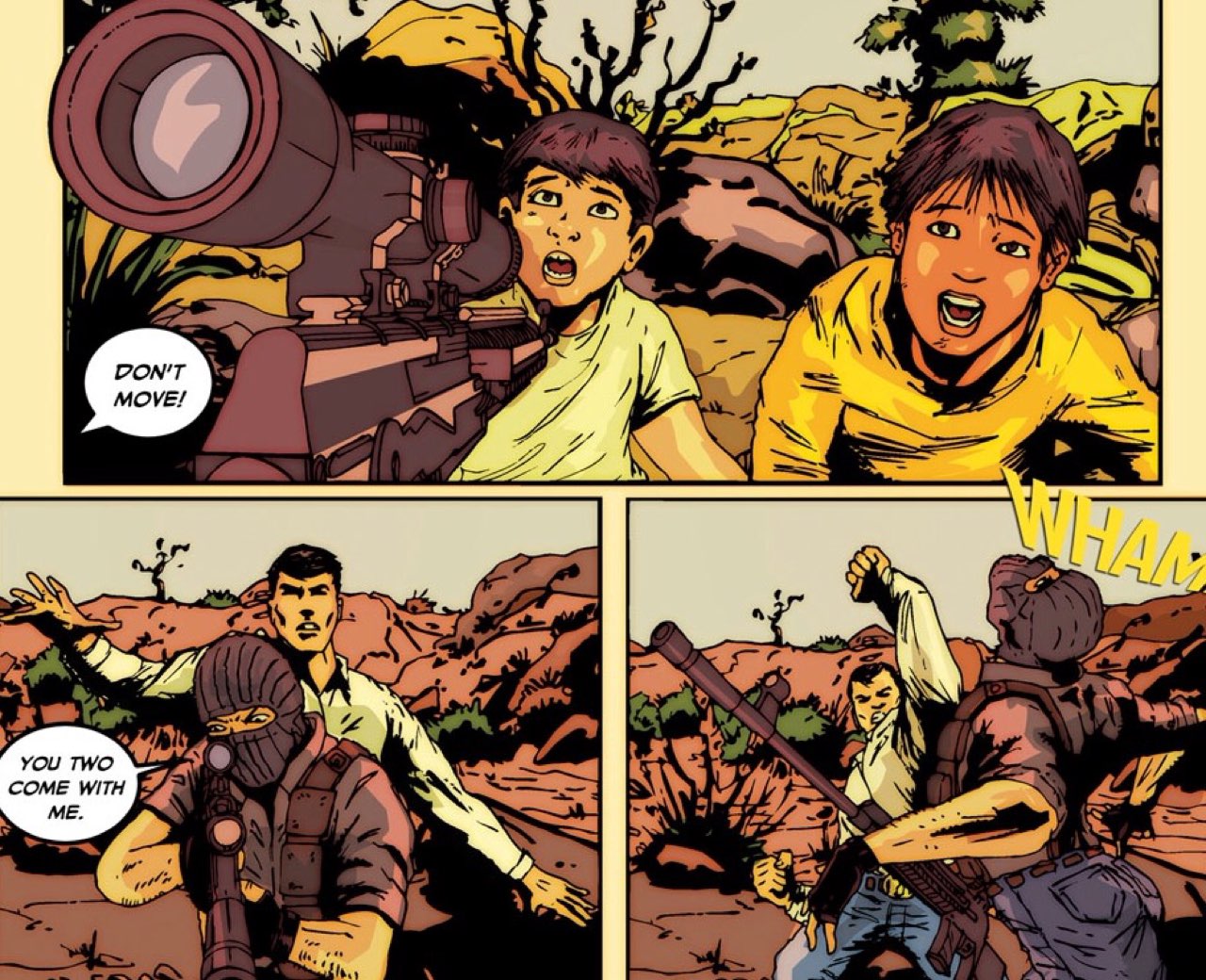 CC: What is the response to El Peso Hero from school kids?

HR: They are excited! Many of them have become inspired to write their own stories. I have told them, I am not the only Latino comic book creator. One of my students became a fan of Humberto Ramo’s work in Spider-Man. It’s was very humble feeling when we contacted him through Facebook to share a piece of fan art a student created for him. He responded very encaustically. With El Peso Hero we help bridge that gap and provide a super hero who is relatable and relevant to their culture. They see themselves in the stories.

CC: Though El Peso Hero can be pretty violent at times is it sort of like fighting fire with fire?

HR: El Peso Hero has a strong sense of justice. He feels he has a strong moral compass in a world with moral ambiguity. He does not kill but he won’t save the bad guys from themselves. His fight against border violence is seen as a hopeless crusade by most. He feels that his violence is the counter force and a shield to protect innocent lives.

CC: What do you think El Peso Hero’s response will be if the USA was to eventually construct a wall?

HR: To him it would be a sad reminder of the ignorance and fear of people. “Esta es gente trabajadora, no viene a ser les guerra” These are hardworking people, they do not come to wage war. He feels compelled to help and protect families crossing. To him, it is a humanitarian crisis. If the wall becomes a burden and causes harm to the people, he will tear it down. In the mean time, he is busy fighting cartels and corrupt federal officials in northern Mexico.

CC: Tell me about yourself. Are you still a teacher? Would you ever consider doing comics full time? What do you do in your spare time if you have any?

HR: Currently, I am a 5th-grade bilingual teacher at McKinney ISD. Being a teacher is a very humbling rewarding experience. There is a great need for great teachers who inspire and motivate students. I don’t see myself leaving the profession anytime soon. but If I had the financial opportunity I would devote myself to finishing writing El Peso Hero for one year. 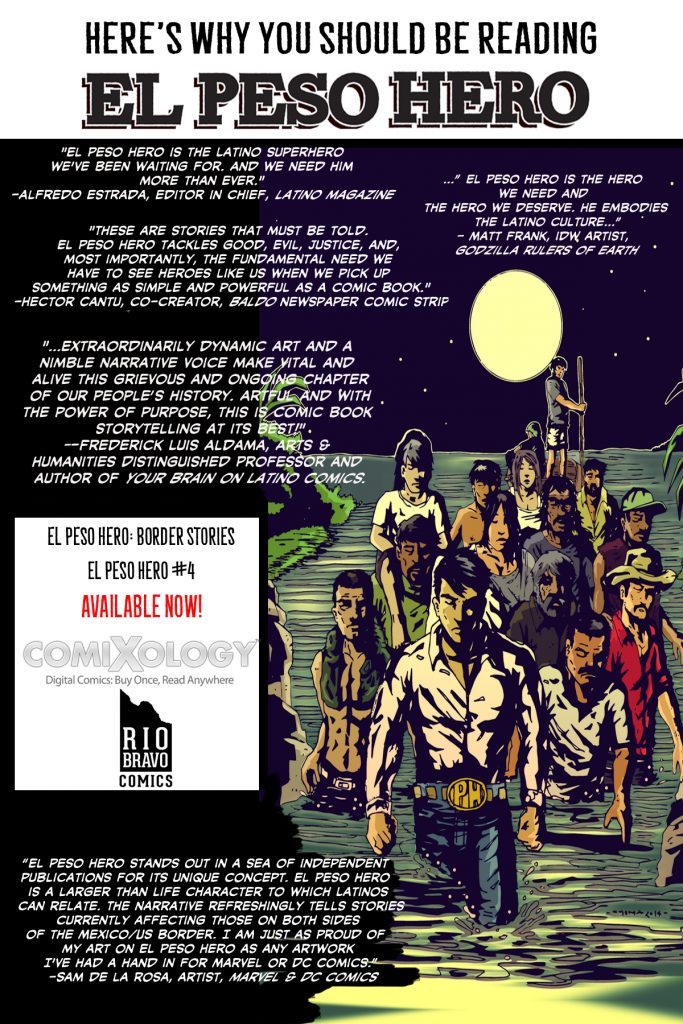 We have also partnered with Dusk Comics to create the very first Latino Comic Con in Texas. It will be free of charge at the Latino Cultural Arts center in Dallas July 29th. Our stories matter!

When I have some down time, I love to read, game, watch movies and hang out with my baby daughter.

CC: What comic books did you read as a kid?

HR: As a kid I loved following the old Aliens, Alien vs. Predator comics by Dark Horse. The dark , gritty stories were a big departure from mainstreamed comics. I would also loved checking out the old Tales of the Creep stories and any Godzilla comic I can get my hands on.

You can read some of El Peso Hero’s adventures and find out more information about him online at elpesohero.com.