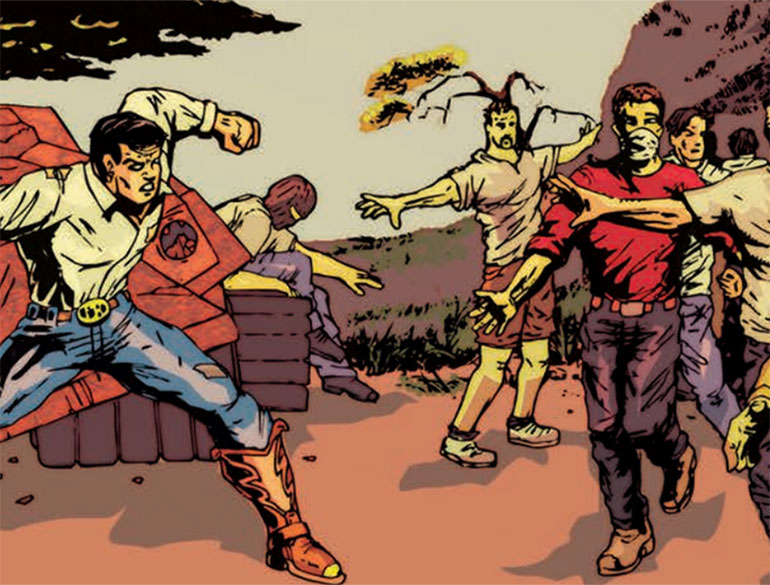 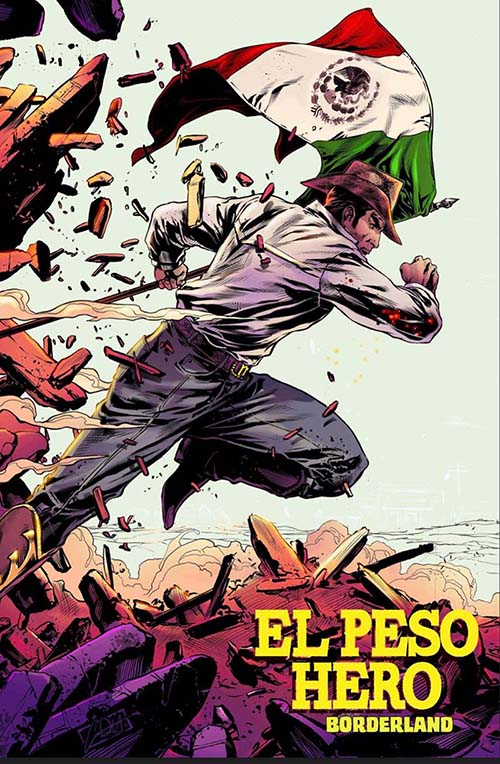 A few years ago, we couldn’t have imagined a world where a reality TV show actor could be elected President of the United States. Then we couldn’t imagine our children being taken from their parents and being held in cages where some die.

These realities make belief in a super hero that come and save us from these waking nightmares not only plausible but necessary. We don’t need god-like heroes from far off planets or other dimensions, we need real people that stand up to hatred. For the past eight years comic book creator Hector Rodriguez has been writing stories about very relatable, down to earth hero: El Peso Hero. This week Rodriguez, along with artist Chema, launches his ninth book, El Peso Hero: Borderland.

El Peso Hero is the story of a modern Mexican super hero that uses his strength to protect the people along both sides of the U.S./Mexican border from those that abuse their power. In El Peso Hero: Borderland, “El Peso Hero joins a group of refugees as they go through the registration process at a detention facility.” I had the opportunity to sit down with Rodriguez to discuss El Peso Hero, some of the issues that he confronts in his new book, and the books affect on local students. 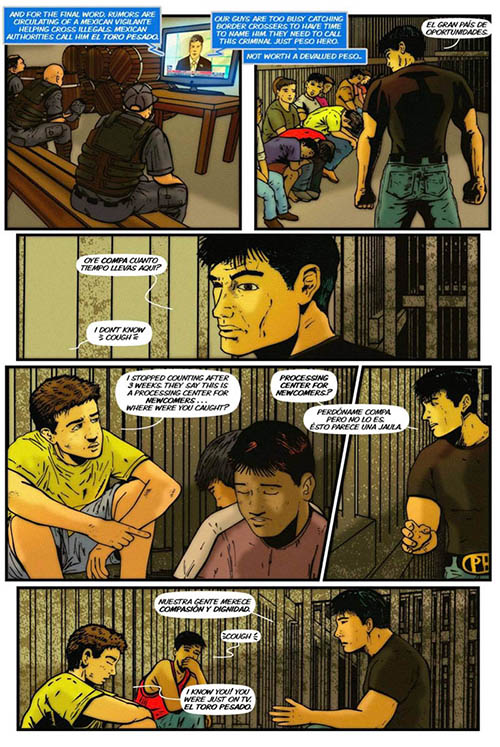 Chris C. Hernandez: What is the symbolism behind the cover art for Borderland?

Hector Rodriguez: Barriers don’t make good neighbors. Especially in the southwest where there is a lot of shared history between the U.S. and Mexico with its cross-pollination of people. By putting a barrier in between it’s breaking history, breaking families, break language and culture. The symbolism of that barrier is very threatening to everybody that lives there. El Peso Hero, being a border hero, having him breaking through the wall is something that is very natural. I’ve gotten comments like “Why is he not holding the American flag?” or “Why is he invading?” “Is Mexico invading?” It can be threatening having a super hero with those abilities seemingly invading your country. The U.S. almost feels like they own the idea of a super-hero.

CH: What kind of super-hero would you consider El Peso Hero to be?

HR: I get asked if he is a vigilante, but I wouldn’t call him that. He is a super-humanitarian. In the story he is given the abilities and power to do good and he feels that it is his responsibility to do the best he can. He feels compelled to follow that. 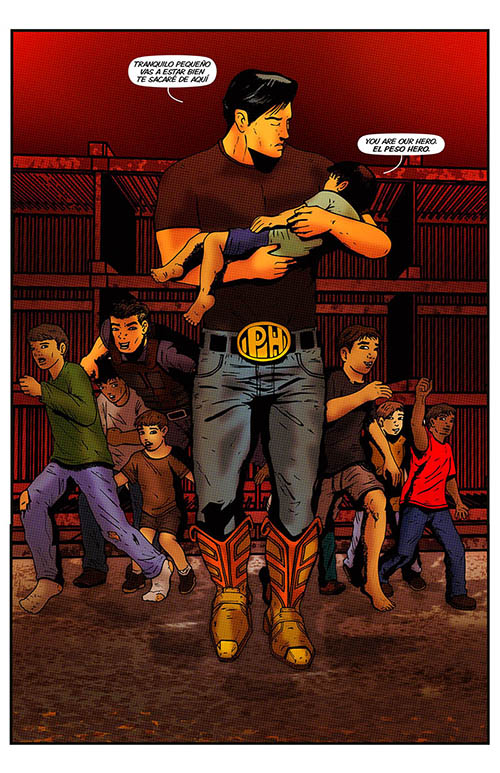 CH: What compelled you to create El Peso Hero?

HR: So, I actually wrote borderlands in 2015 before Trump. I had launched him in Summer 2011 as a webcomic because there was always a need for immigration reform and always people living in the shadows as second-class citizens in our community.  It’s a bridge between cultures and issues having a super-hero dealing with all those things and really it has never been done. El Peso Hero is definitely not the first, but we haven’t seen a Latino super hero dealing with contemporary issues in a long while. In Marvel and DC comics there have been a lot of b-listers and stereotypes because a lack of Latino creatives behind those characters There’s not a representation of Latino creators. I’m lucky to be in a position to get a pulse of the community as an educator being in an urban city dealing with the community and listening to families.

CH: What can you tell us about Borderland and some of the ideas behind the stories in it?

HR: I wanted to put El Peso Hero in a position where in order to get inside he had to embed himself. He discovers the children; that’s something we had to go back and add in. It got darker. We couldn’t even imagine that ourselves. We had readers asking what the world was like outside the border in response to El Peso Hero. So, we explore how would the US government react to a Mexican super hero; going in and out of the country without impunity. We also discover the origin of his name in this book. Everyone along the border had a nickname. I had a nickname.  Belittling him. The people though take that and as a sense of empowerment take that nickname for him as their own.

You take away all the layers, him being male, Mexican, Latino, Spanish-speaking, Norteño…take those away and deep down inside it’s a very human story. It’s a very impossible situation that he’s facing. The story progresses through struggle. And sometimes its more about the characters around him and how they respond to this unwavering character with a strong moral compass. It’s compelling.

CH: You also touch on the theme of Coyotes in Borderlands?

HR: Some of them feel a duty as guides or compasses for the people crossing or else the people may die. They know the terrain. It’s a double-sided aspect because even though they are doing good they also get paid to do that.  So, from this particular Coyote we get to see where El Peso Hero gets a lot of his moral compass from. These two stories add to the overall story-arc and at the same time are reflections of what has been going on regardless of what year it’s happening. 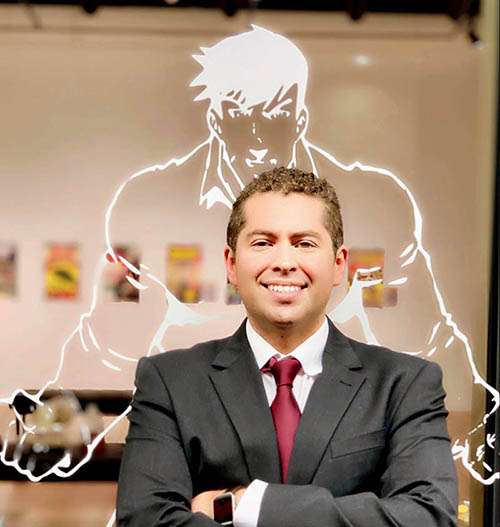 CH: You are a teacher, but you also do presentation at other schools and school districts about El Peso Hero. How do the students react?

HR: They get excited seeing all these things. They feel like they own El Peso Hero themselves. It’s a sense of ownership that’s unique to them because he may look like their Tío dressed in blue jeans and boots. He’s very accessible to him. Characters like Blue Beetle, who is supposed to be this Chicano from El Paso, isn’t really reflective of the kids. He doesn’t have anything to do with the community. He’s always in the watch tower or out in space on otherworldly missions. It’s not really something rooted in out culture. It’s almost feels like a handout. Or America Chavez who sees herself as Latina, but is an alien? It’s like they can’t give us anything. Latinos have their own stories and are very organic and grassroots. 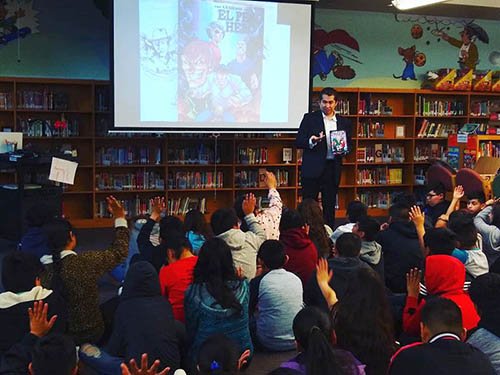 I have a student who is writing a Corrido of El Peso Hero. It’s exciting to see them excited about him. Sixty-five percent of the student body are Latinos in Texas. Doing these presentations about El Peso Hero is very empowering for the students because they see someone that has a last name like theirs making comic books with a super hero that speaks Spanish. They have a lot of questions about the hero and especially about the process because they want to make their own comic books. 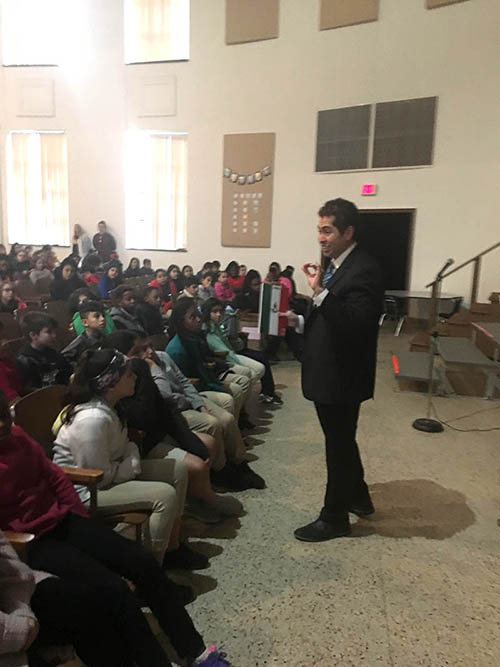 HR: I’m already writing the next story which will bring the overall narrative to a conclusion of this journey that he has been on since the beginning. Sometimes the headlines catch up to me. Somethings that I wrote about years ago is unfortunately coming true now. It’s hard to pinpoint issues because Latinos are such a diverse group. For example, Edgardo Miranda-Rodriguez is creating La Borinqueña and that deals with the issues of PR. El Peso Hero deals with aspects of the Southwest and immigration.