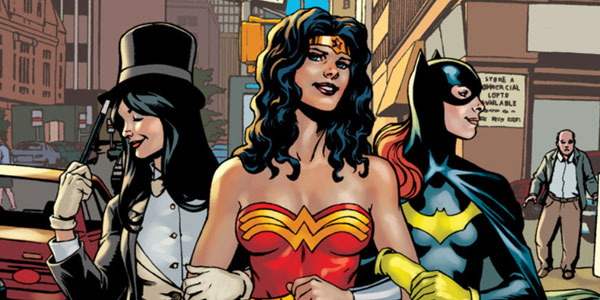 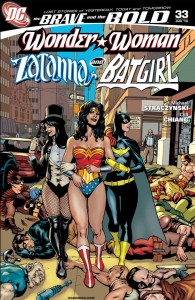 I was recently flipping through some website or another and realized that, despite my best intentions for the better part of the last two years, I’d never read Brave and the Bold #33 (second series, of course). This is pretty unusual for a bunch of reasons, not limited to: Barbara Gordon as Batgirl, Zatanna, Wonder Woman, and Cliff Chiang drawing any of the previous three. Entitled “Ladies’ Night,” this J. Michael Straczynski-penned issue of the series DC Comics described as Lost Stories of Yesterday, Today and Tomorrow features Wonder Woman and Zatanna dragging Babs out for a night on the town in her civilian identity. Taking a girls’ night out, they describe, will be good for all of them and maintain the sanity needed for good super-hero decision-making.

What becomes more and more obvious as the evening progresses is that there is a bigger agenda behind Zatanna’s insistence on a night of carefree dancing. She has seen the future in a dream and knows that one day soon — maybe not today, maybe not tomorrow — Barbara will open her door to face a bullet that will leave her without the use of her legs. One night to remember forever is their gift to Babs in light of a future that cannot be changed by the likes of them. It’s a bittersweet, but ultimately endearing, tale of friendship, heartbreak, memory, and good old-fashioned Silver Age camaraderie we don’t get to see too often these days.

Given how touched I was by the contents of the story, it should have come as no surprise to me that it was controversial at the time of its release. I’ve since read a number of reviews and message board posts railing against the story, calling Straczynski’s plot and characterizations “weirdly sadistic,” tacky, cheap, and depressing. The idea that Zatanna and Wonder Woman could knowingly let Babs get shot by the Joker (in Batman: The Killing Joke, published 22 years earlier) was disturbing to some — and in all fairness to the story, to Zatanna and Wonder Woman as well. That they would make Batgirl go out dancing prior to this pre-ordained, heinous event seemed even callous to others. The amount of continuity hand wringing I’ve since read about this issue could turn coal into diamonds. And almost nowhere did I find one really salient, critical point:

It was just a dream.

Not just Zatanna’s prophesy, mind you, but the events of the entire issue were simply a dream from which Barbara Gordon (now Oracle) wakes, as revealed on the very last page. So, now, I have either encountered the largest pocket of commenters who didn’t actually read the story in question, or our lionization of continuity has reached such epic proportion that characters can’t even have dreams that don’t match up, minute detail for detail, with every story that has come before.

Now, I realize that this is a slightly disingenuous article to be writing in the wake of my involvement in Comicosity’s History of the DC Universe 3.0, where we painstakingly placed points of data from the first 13 months of DC Comics’ New 52 in a single, coherent (it actually is!) timeline. However, all things can be partaken in moderation, my friends*. With a month of continuity-laden zero issues behind us — some appropriately posing new questions for the next year of story arcs — maybe it’s time to remind ourselves just what about continuity is good, and not so good, for our comic enjoyment. What follows are common arguments I hear about continuity that still raise my hackles day in and day out.

Continuity made so much more sense in the old DC Universe. Let’s get the big one out of the way, shall we? Streamlined continuity, like hindsight apparently, is totally 20/20. The only reason it seems like The New 52 makes less sense is a) we fans don’t know everything yet and assumptions can lead to perceived contradiction, and b) we haven’t already agreed to communally ignore massive contradictions like we did in the old continuity. The pre-Flashpoint DC Universe made more sense to readers in 2011 because we already all consigned ourselves to ignore large portions of Hawkworld, reconciled that Martian Manhunter was always a member of the JLA (when truly, he checked out for nearly 15 years), and pretended that Death of the New Gods was really just a bad dream, since it literally was disregarded the day after hitting the comic stands.

Once something is written out of continuity, it’s gone forever. If anyone has proven this to not be the case in the last five years, it’s Grant Morrison. After decades of DC disavowing Silver Age mainstays such as Kathy Kane’s Batwoman, Bat-Mite, the Club of Heroes, the Batman of Zur-En-Arrh, and any number of wacky science fiction adventures the not-so Dark Knight and his Boy Wonder experienced — with the stroke of Morrison’s pen, they’re all back in. And honestly, they make genuine sense, which is an outstanding feat in itself. The lesson here is that nothing is impossible. Cassandra Cain can’t exist because a younger Lady Shiva wouldn’t be her mother? Just wait. Nothing in comics is impossible. That’s what makes them so cool, and so unlike real life.

Why can’t X use continuity more like The Walking Dead, Earth 2, or the Young Justice television series? I would never argue against the story-telling prowess utilized in these three fictional worlds. They are literally three of my favorite representations of cohesive, yet expansive plotting that reach far beyond their immediate needs to develop a full world of wonder for the reader/viewer. That said, each one is an isolated universe all to itself, sharing almost no links or obligation to any other publication or series. They embrace continuity to the extent that they don’t address anything outside their own books/shows, which is the exact opposite of what most fans demand when they ask for tighter canon. If you’re asking for more books like Earth 2, you’re really asking for books that don’t adhere to broad universe-spanning continuity. Had Grant Morrison’s JLA series mimicked this style of compartmentalization in 1998, I wouldn’t be so irritated today reading my hardcovers when Superman inexplicably becomes a blue-skinned being with electric powers for 12 issues.

Four Robins in five years? That’s impossible. I have to laugh every time I read this line because in a world where a solar-fueled aura protects a man from bullets, 7200 magic rings are worn by all manner of alien warriors, and an infinite number of parallel universes result in our own President becoming Superman on one, a simple shortened timeline is incredulous? Whether the current DC timeline is 5 years, 10 years or 15, it all defies logic. A certain suspension of disbelief is required to be a fiction reader of any kind, and here, nothing short of heroes aging literally one month of life per one month of publication (as in John Byrne’s classic Superman & Batman: Generations) is going to absolve us of making a critical leap of faith. I admit, it’s a slippery slope, but I’m pretty sure we haven’t hit bottom yet.

How dare DC have its heroines dancing to “Single Ladies” years before Beyoncé released it? Continuity fail!

Deliberately writing events out of continuity is always a bad thing. We all have our favorite stories. What is important to one person may not be important to another, and great disappointment can come with the realization that stories told in the future may not reflect the details of the first time you read them. But it’s important to note that continuity tweaking is not always a bad thing. Case in point: would it have been a stronger foundation for Jason Todd if his parents were still circus trapeze artists murdered by Killer Croc for helping Batman? Would it make Wonder Woman a more desirable character today if she could still become powerless by having a man simply bind her wrists? Do we really want to read about a world where everyone remembers Supergirl making out with a horse? For as many fans who are upset about the revelations last week regarding Tim Drake’s parents in Teen Titans #0, I strongly suspect many of these same fans are silently giggling to themselves in delight that the events of Identity Crisisare stricken from the history of the current DC Universe. It’s impossible to make everyone happy all of the time, but if a change can open up new, exciting story possibilities? Then I think it’s worth giving it a shot.

Superman is the last son of the destroyed planet Krypton, adopted and raised by kind-hearted human parents, who protects his adopted home with incredible powers. In his mild-mannered alter ego of Clark Kent, he is a reporter for the Daily Planet, working alongside Lois Lane and Jimmy Olsen in Metropolis.

Batman is billionaire Bruce Wayne, a normal man driven to great physical and mental lengths to protect the innocent after his parents are murdered in front of him as a child. Working alongside his partner Robin and trusty butler Alfred, Batman protects Gotham City and the world from mad villainy.

Consistency means no matter what happens in a story, the 50 words above still remain true for each character. Their essence honors that and its understanding influences the decisions and outcomes written for them. It’s what makes a story “count.”

I have shelves and boxes of stories in my home (and massive storage locker) that no longer reflect the current continuity we follow as readers of DC’s New 52, and there’s no question in my mind that they count. These stories influenced me in ways I can barely describe growing up, as they continue to influence the writers and artists who work in comics today. That we have moved on to a new continuity in the modern age makes these tales no less poignant, and certainly no less dear to my heart. 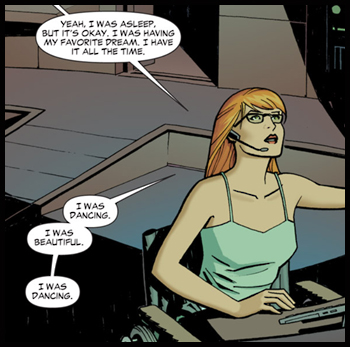 Like these books, Brave and the Bold #33 may not be in continuity, as its major story beat consists of a dream Zatanna has in a dream Oracle has in a universe that we’ve disconnected from in the wake of Flashpoint (whew!), but the story touched me and resonated something about these heroes’ character that made me sit up and take notice. To claim that story is not as good because it doesn’t match up with a currently accepted sense of canon is just shooting oneself in the foot. Why look for reasons to dislike comics? It’s time to embrace continuity for what it is — a tool to assist in the creation of an enjoyable story, if necessary — not an end or story beat in itself. To paraphrase Alan Moore in the introduction to his legendary Superman: Whatever Happened to the Man of Tomorrow?: sure this is an imaginary story, but aren’t they all?

*A second irony that I referenced no less than a dozen past comic book titles by name in an article on the perils of too-stringent continuity does not escape me. I am regrettably no more immune to the effects of my devotion than the next person. Alas, like the new DC Universe, I too am a work in progress.